The cosmic triumph of 1961. What would prevent Yuri Gagarin from smiling widely today?

April 12 2016
165
April 12, Russia celebrates one of those holidays, which is a reminder of the outstanding technological successes of mankind. This, of course, is about a holiday called the World Day aviation and astronautics. On April 12, the holiday is truly international, and outside the Russian Federation its official name is as follows: International Day of Human Space Flight.


If in the Soviet Union the date of the Aviation and Cosmonautics Day was officially approved about a year after Yuri Alekseyevich Gagarin’s flight, namely 9 April 1962, then foreign countries needed half a century to decide on adding April 12 to the international calendar of holidays. In this case, the initiator was the Russian Federation itself.

7 April 2011, at the plenary session of the United Nations General Assembly on the occasion of the 50th anniversary of the first manned space flight, resolution No. A / RES / 65 / 271 was adopted. More than 60 states participated in the development of this resolution.

From the statement by UN Secretary-General Ban Ki-moon on 7 on April 2011:
I am sure that the celebration of the International Day of Manned Space Flight will remind us of the common humanity and the need to work together to successfully solve our common problems. I hope that it will also serve as a special incentive for young people to fulfill their dreams and expand the boundaries of knowledge and understanding in the world. 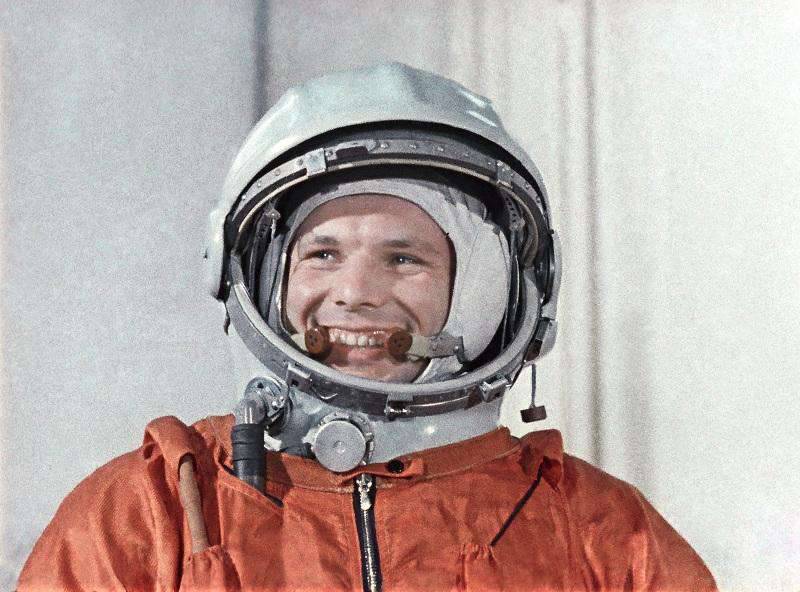 I don’t want to talk about sad things on such a day, but at that moment, when the UN Secretary-General was thinking about the community of humanity, the third week of the NATO bombings of Libya was going on ... This proved once more that a number of states understand the community as “the community of humanity” allows these states to focus on their own interests and goals, even if these goals have nothing to do with the world on Earth.

If we talk about the United Nations, today - 12 on April 2016, a complex of events will be held at UN Headquarters to celebrate the 55 anniversary of the first manned space flight.

What did April 12, 1961 mean for the USSR, and what does this date mean for modern Russia? For the Soviet Union, the first manned flight into space was not just an event with a plus sign. It was an episode of the transformation of society, a new more than substantial impulse for development - after the impulse received on May 9, 1945. April 12, 1961 is the birthday of a unique understanding of technological superiority and the birthday of added self-confidence. And this day has a symbol - a man whose smile is known without exaggeration to billions of representatives of modern civilization around the world: from the heart of Russia to the most remote corners of other countries and continents. The name of Yuri Gagarin for millions of foreign citizens is often associated with the main historical in the name of Russia, which was repeatedly demonstrated by various opinion polls.

April 12 for Russia today is not only a reason to celebrate YNU Gagarin’s 55 anniversary of space flight as a technological breakthrough, but also a reason to think about the value system. And this system for 55 years, passing from the date of the April triumph of 1961, has undergone, to put it mildly, certain changes. So it happened, but today a few representatives of Russians of “tender age” say that their dream in the future is to become astronauts and conquer the expanses of the Universe or become developers of the newest spaceships. Unfortunately, the times of “cosmic” romanticism have remained largely behind, and today the majority of children say far from “cosmic” dreams in terms of choosing their future profession. Despite all the statements that we’re legal and economic specialists with two or three diplomas, we are a dime a dozen, young men and women still believe that it is easier and more useful to strive to obtain only economic or legal education in modern conditions. Like, the space we will see in 3D-cinema.

In general, it is difficult to talk about the popularization of the cosmic direction of domestic science, if children from school are reminded of the existence of Cosmonautics Day no more than once a year. And it’s good that they generally remind, because at one time, officials of the Ministry of Education and Science (education and science! ..) decided to exclude such an object as “Astronomy” from the school curriculum. It is interesting to know the name of the person to whom such an idea even occurred to him, and how was the course of its implementation motivated? One gets the impression that education officials decided to implement a program according to which our children do not need knowledge of the USSR’s technological triumph in 1961 ... But this is actually another attempt to deliver a crushing blow to the heroic history of the country and its people, another attempt to cultivate Ivanov, not remembering neither kinship, nor the bright pages of the history of the state in which they were born.

Last year, the cosmonauts themselves, who today cannot imagine what their professional fates would have been, sounded the alarm about this if astronomical science had acted in schools in their time just as they had done several years ago. Russian cosmonauts have collectively advocated the return of this academic discipline to the school curriculum. During the press conference dedicated to the 46 / 47 flight of the expedition to the ISS (April 2015), space pilot Yuri Malenchenko said important words:

Of course, you need to enter such a subject. Children are interested in space issues, they are interested in how our solar system works. Based on our work on the ISS, we have planned a number of events with the aim of attracting the interest of young people to space so that in the future they will link their lives with astronomy and related disciplines.

The cosmonauts on their own prepared a series of popular science films about the characteristics of life on the International Space Station, created several video tutorials on the implementation of various physical laws on board the spacecraft under weightless conditions. Modern enthusiastic teachers willingly demonstrate this material to their students, who in fact “secretly” from the Ministry of Education and its educational standards try to sow among the young generation both reasonable, eternal, and good. And only thanks to such enthusiasts, for whom education is not only and so much of the Unified State Exam, most modern schoolchildren can still name the first person in space, and that this person is our compatriot, not an American superhero ... Low bow and cosmonauts and enthusiastic educators! Thanks to your work, our society does not slide into the final consumer corps de ballet.

The Kremlin press service reports that today, Deputy Prime Minister Dmitry Rogozin and the head of the Federal Space Agency, Igor Komarov, will report to the president on the development of Russian space exploration. I would like to hope that this report will also touch upon the question of the real popularization of science related to the exploration of outer space in modern school. After all, if a person from childhood does not have the opportunity to receive information about what generally prompted the appearance of the Cosmonautics Calendar, it is somewhat strange to expect him to work in the future to develop this industry, which is strategic for Russia and for its technological competitiveness level.

The famous Gagarin "Let's go!" in this regard, today may come in handy!

Ctrl Enter
Noticed oshЫbku Highlight text and press. Ctrl + Enter
We are
ARMY-2016. Cluster VCS. Part of 2. Space is space!“Russian Spring” on the festival of colors in Kiev and bloodshed in the Donbas
Military Reviewin Yandex News
Military Reviewin Google News
165 comments
Information
Dear reader, to leave comments on the publication, you must sign in.