April 12 2016
30
Erdogan is ready to turn the European Union into a harem, which bearded “refugees” will enjoy at their pleasure. Brussels is not in a hurry to transfer the “promised billions of euros” to “Neosultan”. And if so, Mr. Erdogan can “open the gates” and send three million Syrians into Europe: let the Germans, the French and others keep them themselves. 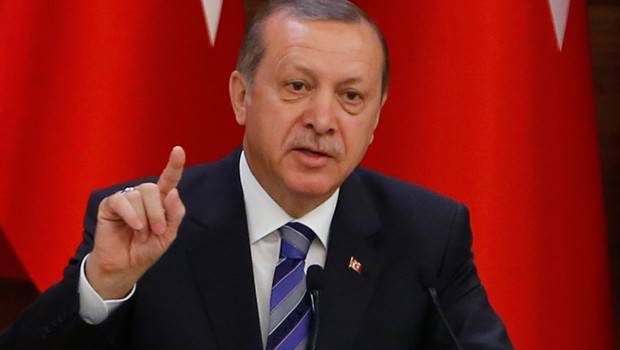 Recall that 18 in March, the EU states and Turkey approved at the summit in Brussels an agreement on illegal migrants, which provides for the return to Turkey of all illegal immigrants who arrived in Greece from Turkish territory. The European Union, in turn, is obliged to accept legal refugees from Turkey ("one by one"). The essence of the agreement: the cost of returning migrants to the territory of Turkey promised to take over Brussels. Ankara should receive from the European treasury 6 billion euros (before it was about 3 billion euros; another 3 billion, designated by the Turkish “blackmailer”, are called “additional”). In addition, Erdogan negotiated the acceleration of the adoption of a European visa-free regime for Turkish citizens, as well as the resumption of negotiations on Turkey's accession to the European Union, suspended in 2007, on the initiative of France.

April 4 “deal” of Turkey and the EU in respect of migrants began to work. In the morning of this day, the first ships with migrants left the Greek islands of Lesbos and Chios in the direction of the Turkish port of Dikili in the province of Izmir, the television channel reported "Euronews".

It was about illegal migrants who arrived “in search of a better lot” not from the combat zones, but from Pakistan, Bangladesh and Morocco.

However, the rest of the terms of the “deal” are not in a hurry for the EU to carry out for some reason. In Europe, in general, they love to pull the cat by the tail, but neo-sultan has not met such a tactic of understanding. Already on April 7 he explained to Brussels that this would not work.

The Turkish President spoke in Ankara to the police. In addition to a number of topics, he also highlighted the question of non-compliance by Europe with the terms of the agreements.

R.T. Erdogan reminded Europe that 3 now lives in Turkey for a million people who have fled from Syria. For their maintenance requires money. There is also an agreement with the European Union. However, for some reason not to hear about money. 3 million people continue to feed from the Turkish budget.

According to the president, Europe has not yet received anything but words, except promises. Erdogan wants the money that the readmission agreement (process for the return of migrants) implies.

According to the Turkish leader, the agreement involves a process and certain conditions that "must be followed." If the European Union does not take the necessary measures and does not fulfill its obligations, Turkey will also "refuse to implement the agreement."

Speaking about this, Erdogan emphasized the “text, agreed text”, which should be adhered to, “no matter what happens,” and advised not to upset the Turkish people with “lies”.

He also noted that readmission can be implemented only with the approval and consent of the relevant state. Without such consent, "nothing can be done."

The "blackmailer" deftly uses words and especially the term "text", however there are political nuances that he prefers to forget about.

As recalled RBC, supporter of this deal was Angela Merkel, who called the agreement “the first real chance” to stop the migration wave.

But later, the EUobserver source noted that the parties could not agree on four very sensitive issues: the legal status of the “deal”, the date of its commencement, the allocation of additional 3 billion euros and the resumption of negotiations on Turkey’s accession to the EU. Cyprus was against the last point. For the finalization of the transaction expressed the head of the European Council Donald Tusk and the head of the European Commission Jean-Claude Juncker.

Even these “pitfalls”, we note, mean that Europe is not eager to execute the “deal”, especially in its financial part. In the future, Erdogan will certainly be made to understand that the legal status of the “text” continues to remain doubtful.

No one wants to accept Turkey to the European Union in its current form - with a natural war in the country against the Kurds, with the feeding of the IG militants and the oil trade with them. It is clear that the matter is not in Cyprus.

Most likely, Europe is pulling time, trying to solve a difficult problem with migrants, and the “neosultan” was thrown not a “deal”, but a set of promises. The trouble is that the hot Turk did not want to wait long and performed the song “No, no, no, no, we want today, no, no, no, no, we want now” in Ankara. April 4 began the exchange of migrants, and April 7 Erdogan recalled billions. In three or four days, the Turkish president will stop the deal. To prevent this from happening, Europe will have to give him at least a few millionaires.

But in the EU, too, are not fools. There, the “Sultan” will be reminded that financial assistance in the amount of 6 billion euros should come not “today”, but before 2019.

And yet, the first installment of mother Europe will have to pay right now. Otherwise ...

Otherwise, Europe will be raped.

Europeans are afraid of the very thought that 3 of a million evil Syrians can direct their feet to their countries. “Erdogan is a punch guy. He, if he promised to rape, then rape. And this is his trump card in the game with amorphous, timid, inconsistent Europeans who are raped by migrants, and they ask for their forgiveness, ”said Reedus political scientist, expert of the Russia-Caucasus center Nikolay Banin.

“Erdogan acts in exactly the same way as the leaders of the DPRK. Only Pyongyang is blackmailing the West with an atomic bomb, and Ankara - with Syrian refugees, ”the expert believes.

There is one major flaw in this comparison: the European Union is very little afraid of Pyongyang’s atomic bomb, but the problem with migrants naturally tests not only “European values” for strength, but also the chairs of other politicians - like Angela Merkel.

Observed and commented on Oleg Chuvakin
- especially for topwar.ru
Ctrl Enter
Noticed oshЫbku Highlight text and press. Ctrl + Enter
We are
Refugees from Syria. Will Russia accept immigrants from the Middle East?What to do with the refugees? Eastern Europe to host thousands of Africans and Asians
Military Reviewin Yandex News
Military Reviewin Google News
30 comments
Information
Dear reader, to leave comments on the publication, you must sign in.