Where does the Russian world end, or again about the "fraternal" gratitude

April 11 2016
239
Some time ago, during the new clashes in Karabakh, something happened that was to be expected. First, in blogs, and then more publicly, in newspaper articles, individual Armenian observers began to ask questions: “Where is Russia? Why do we need an ally that does not help? ”Later attacks against our country became even more numerous and harsh, right up to direct Russophobia. At the same time, consciously or not, I avoided the question that, in general, the Russian Federation has no military obligations to the NKR. None Such commitments exist in the framework of the CSTO to the state of Armenia, to which no one has yet attacked. Unfair and insulting accusations give rise to quite fair arguments among Russian citizens about where the Russian world ends, which we are obliged to defend at all costs.. 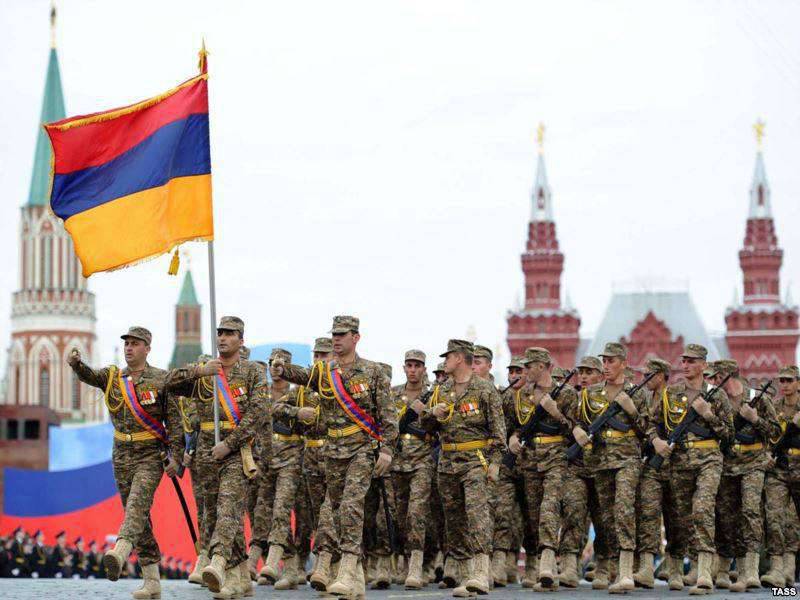 And the reasoning, by the way, is by no means idle, considering how much depends on correctly placed priorities. The incorrect definition of priorities and their substitution with the affairs of the third and tenth importance have already ruined more than one country, including the USSR. And to set priorities correctly suddenly turns out to be an extremely difficult affair, having an artificially constructed veil of lies in a public space. In his recent article “Configuration of helplessness,” your humble servant pointed out a completely obvious thing: the CSTO alliance created during the time when Yeltsin and Kozyrev had dominated the foreign policy views did not reflect Russia’s national interests in the least. Moreover, he deeply contradicted them. At the same time, a tool such as the CSTO allowed the well-known external forces to moderate northern Eurasia with the hands of appeased Moscow, laying new political mines on top of the old ones around the Russian Federation.

The expressed and repeatedly reasoned idea of ​​abandoning the support of the most irresponsible republics of the former USSR evokes totally inexplicable emotions among our individual citizens. Oh, how does this bad person (the author) propose to give up the support of Armenia, Kyrgyzstan and Tajikistan? They say it is the same as to abandon the Donbass, Crimea, Transnistria, Rostov, Voronezh, Siberia, the Urals and shrink to the limits of the Moscow region. Arguing in a similar way, as a rule, either people with extremely limited intellectual abilities, or banal provokers, and provokers of the most bad sense. Some of them agreed to the fact that they called the part of the Russian world Syrian Latakia and Palmyra. As a rule, these are the same people who two years ago said something like “how our soldiers should die for these miners of Donbass lying on the couch”. Now it turns out that for Syria, which most of our fellow citizens can hardly find on the map, it is possible to die to our soldiers, but for, without exaggeration, the original Russian lands are not. So the porridge comes out of “Crimea is ours,” “Donbass is not Crimea, there are lazy miners there,” and “in Syria (!) We are threatened by a terrible ISIS”. For such individuals, in due time they invented the apt expression “both the leaflet and me”, now, unfortunately, almost forgotten.

In fact, a true patriot should not eat what television and network “experts” offer, but think with his mind, understanding what is good for the Motherland and what is not. I would like to remind you that under Gorbachev, too many loud words were said about patriotism and how we stand guard over Soviet interests and show more to the West. What has been done in reality and how it all ended, I suppose everyone remembers. So do not judge by the words. Judge only by deeds, and by deeds you recognize them.

What is the Russian world, which must be protected at all costs? Exit to the natural borders, necessary both from the standpoint of security and from the point of view of optimal functioning of the state’s economy, is an old dream of so many powers and their rulers. The natural borders for the Russian Empire were approximately reached by the end of the XIX century. In the north-west Petersburg was covered with protrusions of Finland, the Aland Islands and the Baltic; in the west, the borders of the empire rested directly into the possession of European powers; in the south, the Caucasus was a natural obstacle, as well as the deserts of Central Asia; in the east - the mountains and the Pacific Ocean. These borders proved so successful that neither the peaceful loss of Alaska and the Kuril archipelago under Alexander II, nor the loss of South Sakhalin under Nicholas II had any significant effect on the economy or the security of the empire. Russia as a state and civilization could quite comfortably exist without these remote territories.

Today, the Russian Federation is in a much more vulnerable position than the Russian Empire a hundred years ago. The resource base has also catastrophically decreased. For the most part of the indicators, we are no longer a great power, but we don’t even draw on an average country. Based on this, going back to the beginning of the text, it was sheer madness to fight for Armenian, Kyrgyz or Tajik interests in territories to which the Russian Federation does not even have direct access. These nations are gratuitous consumers of Russian resources, including our “security umbrella”. Thanks to him, they exist at all, and were not erased from the face of the earth by hostile neighbors (Armenia) or did not drown in the squabbles of civil wars (Tajikistan, Kyrgyzstan) and the influx of Islamists. Russia protects with its soldiers and money the territories that do not belong either to the Russian world or to Greater Russia, and in return receive only black “fraternal” ingratitude. We note that the same Armenians protect, as well as Central Asian nations and Syrians, while in the Donbas Russian and Russian-speaking citizens die almost every day.

In this sense, the CSTO partners would like to wish with great respect to appreciate the attention from the Russian Federation, which they currently use. One day this attention may end.

Ctrl Enter
Noticed oshЫbku Highlight text and press. Ctrl + Enter
We are
Karabakh rift is eternalDay of the Armenian army. How the armed forces of Armenia were formed and developed
Military Reviewin Yandex News
Military Reviewin Google News
239 comments
Information
Dear reader, to leave comments on the publication, you must sign in.