Poland took the watch of unconsciousness

April 11 2016
46
29 March in the historic city of gunsmiths Tula was launched the all-Russian action "Memory Watch-2016", dedicated to the 71 anniversary of the Great Victory. Forty thousand volunteers went in search of fighters who went missing in the battlefields of the Great Patriotic War. During last year’s memory campaign, search engines found and identified the remains of more than two thousand soldiers who died in the battles for the Motherland. Thanks to the volunteers, the descendants of the fallen soldiers found their relatives, restored an important link in their imperishable memory. 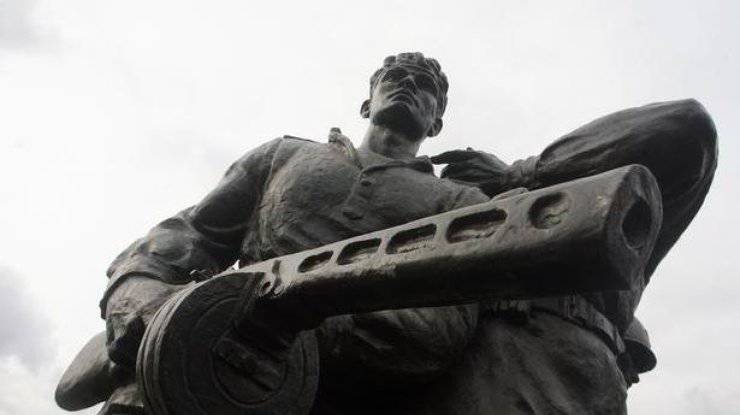 Two days after the memorable event in Tula, March 31, the Polish authorities announced their action. They decided to demolish about 500 Soviet monuments across the country. Such a statement on the portal Onet.pl made the head of the Institute of National Memory (INP) Lukas Kaminsky. The biting round figure attracts attention, the time of the Polish demarche, which coincided with the watch of Russian volunteers and, finally, the status of INP is a purely public institution. So, this is not the initiative of the zealous keeper of the Polish stories and memory, but the real policy of national authorities.

There is nothing new in it. The Poles declared war on Soviet monuments even earlier than they had moved from the eastern military bloc to the western one. By the time of the collapse of the socialist camp in Poland, there were about 570 monuments and monuments to Soviet soldiers. This figure was fixed by the Russian and Polish government in 1994, when they entered into an agreement on the protection of monuments. Since then, according to experts, no more than 200 memorials and monuments have been preserved in Poland. The rest are already destroyed, destroyed, dismantled. Therefore, the figure named Kaminsky is said more for wit (show the scale of the Polish action) than to reflect the real picture.

Shortly after the statement by the head of the Polish INP, Russian Foreign Minister Sergei Lavrov called Poland the leader in the demolition of monuments to Soviet soldiers. According to Lavrov, last year in Poland, “30 monuments that symbolized not only the liberation mission of the Red Army, but also the Soviet-Polish fraternity were desecrated or unauthorized arms».

The Russian minister objected to the Polish Foreign Ministry. Warsaw believes that the 1994 agreement of the year applies only to military cemeteries. (In Poland there are 1875 cemeteries where fallen Soviet soldiers are buried). However, the vandals have already reached these places.

This mood of the marginalized is fueled by Polish politicians, who have long been building parallels between the crimes of the German fascists and the liberation mission of Soviet soldiers. This is what the historian Pavel Ukelsky drew from this in a conversation with the correspondent of Deutsche Welle radio station: “It’s hard to imagine that memorials to Wehrmacht’s soldiers would be present in a similar way in the public space.”

Tolerant Europe quietly listens to this crazy stuff. She understands the Poles. Europe in a matter of days or weeks (in which country how it happened) lay under the Nazis, and then diligently worked for the interests of Germany, supplied volunteer units, military equipment, weapons, food to the Eastern Front. Therefore, together with the general joy of the victory over fascism, many still persuade the soul of unprincipledness, cowardice and weakness of their countries. This public from the barbaric action of the Poles is even good - the humiliation of winners softens the feeling of their own insignificance.

Meanwhile, with a calm analysis, another parallel is easily seen - between a member of the European Union, civilized Poland and an outcast of the world, the terrorist group Islamic State. Both subjects were marked by the destruction of monuments and temples. I am sure that bearded savages did not read the great Pushkin, a metaphor that assessed the importance of memory and monuments for man: "The earth would have been dead without them, / Without them, our close world is a desert."

Polish politicians may not remember Russian poetry either, but they are obliged to share the values ​​that the poet so vividly expressed. On that there is all civilized world. Not for nothing, after the most destructive war in world history, he hurried to create a specialized institution (UNESCO) to protect his values.

The second edition of Polish Hate

In Poland, the values ​​of the world are not for the first time inferior to national envy and animal hatred. So it was after the first world war. Then, after centuries of cohabitation, the Poles emerged from the big Russia and created their own republic, the next Polish – Lithuanian Commonwealth with subnumber II. They began with the destruction of monuments.

The first was the monument to seven Polish generals installed in Warsaw. Generally speaking, there were six generals (Mauriziy Gauk, Stanislav Pototsky, Josef Novitsky, Ignatz Blumer, Stanislav Trembitsky and Tomash Sementkovsky), the seventh in the list is Colonel Philip Metsishevsky. People rumor attributed to him a higher rank. So the monument was called - "the seven generals." Architect Antonio Corazzi wrote an inscription on it: “To the Poles who died in 1830 for loyalty to their Monarch”.

The generals for refusing to violate the oath given to the Tsar of Poland and the Emperor Nicholas I of Russia were killed by the rebels during the November 1830 uprising. The grateful emperor ordered a monument to be erected in the center of Warsaw in memory of the devoted commanders. The exalted Poles removed the monument immediately after the abdication of Nicholas II. This was followed by a patriotic rampage - monuments to emperors, royal governors, military leaders, war heroes flew to the earth. Of the fourteen status monuments of Russian history, the Poles destroyed twelve.

Then he took up the Orthodox churches. The Church of St. Olga, the Church of St. Michael the Archangel, went down for demolition, but the main irritant of the patriots was the Alexander Nevsky Cathedral in Warsaw. It climbed to the center of the Polish capital at 70 meters and was the tallest building in the city.

The cathedral was built by an outstanding Russian architect Leonty Benoit. The interior was decorated with frescoes and mosaic panels by Viktor Vasnetsov and Andrey Ryabushkin. The cathedral was consecrated in the spring of 1912. At first, the Poles did not dare to demolish it, they wanted to convert it to a Catholic church, because the church was rich. Gold, precious and semiprecious stones, marble and granite were used in its design. The altar was decorated with columns of jasper.

Later, the idea arose of creating a museum of a martyrology (martyrdom) of the Polish people in the cathedral. Perevetila all hatred for the symbol of another's faith, which occupies a central place in one of the main squares of Warsaw. Cathedral blew up. Not immediately, of course. First, they removed marble slabs, murals and frescoes, scooped up precious stones. Jasper columns were transported to the tomb of Marshal Pilsudski, in Krakow.

Then the cathedral was demolished with small explosions. They took 15 000. The hearts of the Polish patriots did not calm down. It was necessary to destroy the Orthodox churches throughout the country. This task was basically accomplished in a few years. In Poland, only a few Orthodox churches survived.

History repeats itself. Today the center of Warsaw is decorated with the Palace of Culture and Science - the tallest building in Poland. It was built as a gift from the Soviet Union to the Polish people by Soviet builders and with Soviet money. The building is executed in the style of the famous “Stalinist skyscrapers” and now it hurts the eye completely to independent Poles, recalling the past dependence on the “totalitarian empire”.

This time, the Poles, first of all, removed from the main lobby a bronze sculpture depicting two builders of the Palace of Culture - a Pole and a Soviet citizen. Then they came to a simple and clear thought - to demolish the building. However, the gift turned out to be expensive - the 42-storeyed skyscraper in 3288 rooms, the height of 187,68 m and the internal volume of 817 000 m³ was a shame to ruin.

In the middle of the 1990-ies announced an architectural competition, which won the project, which involved the construction of several skyscrapers around the palace. On their background, the "Stalinist high-rise" was lost. The "imperial influence on the Polish capital" was also reduced. But Warsaw was not able to master such an ambitious project.

Then the exhibition center, headquarters of large companies and public institutions, museums, cinemas, theaters, restaurants, bookstores, scientific institutions, swimming pools, and the largest conference hall in Poland designed for 3000 people were located in the palace ...

But still the honorable Polish soul is worried that the building, which is today among the ten highest skyscrapers of the European Union, was inherited by Poland “from the Stalinist heritage”. In 2007, the Palace of Culture and Science was entered into the register of architectural monuments, however, the Poles did not refuse the idea of ​​demolishing the building. The last time public discussions on this topic were five years ago.

Until the palace, donated by the Soviet people, the hands of the Poles have not yet reached out. But they put out their hatred on memorials and monuments to Soviet soldiers. The world did not shudder from this cynical watch of unconsciousness. Apparently, the moral vaccinations of the Second World War ceased to act on people, since the unscrupulousness of Poland is not being discussed and is not condemned now in the world ...

Ctrl Enter
Noticed oshЫbku Highlight text and press. Ctrl + Enter
We are
Memory is immortal. Memorial to the fallen soldiers of the Red Army opened in Amvrosiyivka and the remains of soldiers reburiedSearch engines of Russia. View from the side, but standing nearby
Military Reviewin Yandex News
Military Reviewin Google News
46 comments
Ad