Tricky comments. G7 in G8: a bun with jam or without?

April 12 2016
64
On the eve of the summit, now the G7 in Hiroshima, German Foreign Minister Steinmeier broke out at once with several statements that the German media quite willingly picked up. 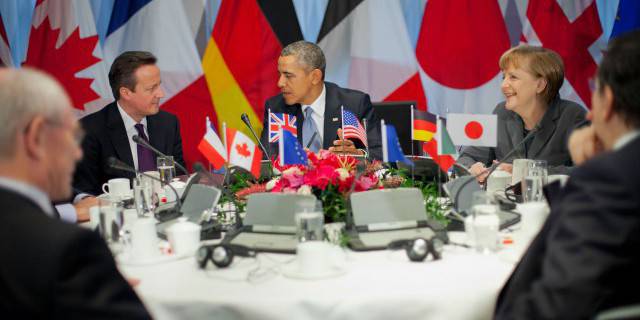 Mr. Steinmeier told the Zeit newspaper that none of the major international conflicts can be resolved without Russia, and the events in Syria and Russia's actions in resolving the conflict can be described as active and fruitful. He also expressed the hope that soon it will be possible to switch from the G7 format to the G8.

It would seem, it came at last. An, no. Probably according to the principle of "do not sigh," the German minister immediately recovered.

"I would like for us not to remain in the G7 format for long, but to create conditions for the return to G8. But this year there are none yet."

"In a year we will see if the role of Russia will remain just as constructive, and then the G7 member countries will discuss when its return will be possible and what conditions for this must be fulfilled."

Well, and so it all began ... The enlightenment of understanding remained a ray of hope, flashed among the black clouds of misunderstanding and frank obstinacy.

For another year, the G-7 countries will look after Russia and think. Evaluate. Pretend. Develop conditions.

By the way, the key word here is “conditions”. That is, the "Seven" will also set the conditions for the return of Russia to this, if I may say so, "club for talk."

Now about obstinacy and misunderstanding.

Mr. Steinmeier does not understand what Mr. Lavrov perfectly understands.

And in his time, Mr. Lavrov said that Russia “does not cling to the format of the G8.” Eight ”is an informal club, nobody draws out membership cards there, no one can kick out anyone there by definition. If our Western partners think that the format has outlived itself, then so be it. We do not cling to it. "

On the topic "and we need it?" quite a lot has been said. And the understanding that it is not particularly necessary is rooted in Russian heads for a long time. Indeed, who is in the “seven”?

And who there (hypothetically) can squeak independently? Well, let's leave Germany and Japan alone, the guys are under soft occupation, no complaints. The United Kingdom is also clear, like a pound sterling, never considered a friend. But at least honestly, without masking. Canada ... those are still lambs. Mooing without waiting for the team from the south. France and Italy ... mda ...

And, sorry, you can communicate directly with the United States. In the framework of the usual bilateral summit. And it is not necessary to stir up these summits for this. Agree on protocols, approving compositions, driving planes, making all these expensive moves. The crisis in the world, as it were ...

Moreover, the result of a pompous talker, even at the highest level, can be none.

Bun with jam. This is if the German, since the words of the Germans began to dance. Summit is an English term. And the Germans it sounds like "Gipfel". Bun puff with cherry or cheese.

Why does Mr. Steinmeier not understand that participation in a bun, it doesn’t matter, in the role of dough or filling is not a primary goal for Russia? So it is clear that without Russia it is rather fresh. Definitely the role of Russia is the filling, because in the test all the vassals of the United States are already involved. Layers. Something is needed that will relieve the vainness of the dough.

But who needs it? It is necessary for the "seven" to give the bun a look that is not an unmarried plow with a foreman. But then what kind of conditions are Mr. Steinmeier talking about?

Of course, for the year you can come up with the conditions. The main thing is that at least someone in Russia agrees to consider them. This is the main condition, not the conditions themselves.

In May, in Hiroshima, this very gepfel without a filling will take place. And what will they discuss there?

And the agenda is most amusing.

It is said that the main topics of the meeting in Hiroshima will be the fight against international terrorism, the situation in the South China Sea, as well as issues of nuclear disarmament.

The fight against international terrorism. Good. Indeed, there is something to discuss. For example, how it was possible for two years to detain terrorists in Syria, that the situation became more and more critical every day. And yes, these issues can be discussed without Russia. Russia has shown that it can easily handle itself in terms of the destruction of terrorists.

And definitely without Russia, it is necessary to discuss what is happening today in Europe. Complete impotence of the European special services and law enforcement agencies - what is not a topic for conversation? Especially as Europeans pay a bit overpriced with their lives for broken excavators. There are, in short, what to talk about.

The situation in the South China Sea. Yes, the situation is not so simple, but I'm sorry, but where is the European component? France, Italy, UK, Germany? What is there to discuss what is in the interests of the United States and Japan? Demonstrate loyalty to the overlord, nothing more.

Nuclear disarmament. This is generally an epic theme. Here you can talk a lot. But. Against whom will we disarm? Against Russia? Funny, right? Now, if the question was about the expansion of NATO, the deployment of a missile defense system, or something else, then the absence of Russia is completely justified. Indeed, what is the point of inviting the one against whom everything is directed?

I do not think that the seven-men plan to disarm unilaterally. It is clear that everything is very neglected, but this is not to be expected of them. And without Russia to discuss this issue is just silly. By the way, as without China.

As a result, all this G7 today is nothing more than a political talker without any serious consequences. Puff pastry without filling. Nedogipfel. And for it to become a full-fledged product, Russia's participation is necessary.

However, no one there, in the "seven", for some reason, does not think about the question whether Russia will begin to fulfill the conditions necessary for its return to this company.

And, by the way, did it only occurred to me that Russia could have their conditions for return?

Ctrl Enter
Noticed oshЫbku Highlight text and press. Ctrl + Enter
We are
Results of the week. “Can you tell me how many degrees it is below zero?”Tricky comments. Again the old American record!
Military Reviewin Yandex News
Military Reviewin Google News
64 comments
Information
Dear reader, to leave comments on the publication, you must sign in.