April 11 2016
77
By definition, our Polish "friends" could not get around such a date as April 10. Along with Katyn, the day of the crash of the Tu-154 with the first persons of the Polish state on board (10 of April 2010) near Smolensk became a sort of episode of Polish self-identity - at least the self-identity of those who are willing to substitute concepts and distortion stories look for some political dividends for yourself. And if the state has no other reason to try to send its policy, except for the conspiratorial reasons pulled by the ears, then the state is doomed to eternal picking in the style of "the enemy does not sleep." And the enemy is in the understanding of the modern political elites of Poland, of course, Russia, which, again in the understanding of the Polish elites, literally sleeps and sees how to destroy the Polish statehood, and turn the deported democrats into “Kremlin slaves”.


And these very slaves of cockroaches in their own heads on the sixth anniversary of the crash of the first airfield of Poland near the Smolensk-Severny airfield decided once again to divert the attention of the country's population from the problems associated with the fact that the Polish leadership finally signed for its direct dependence on the Central Directorate from the Greater Washington DC brother How to distract? Yes, simply declare that all the previously published findings of the investigative commissions, and even the conclusion of the special commission, which worked under the authority of ex-premier Donald Tusk, you see, is falsification.

It is necessary to recall the findings of numerous expert groups and commissions dealing with the Tu-154 crash case, on board of which there was then Polish President Lech Kaczynski with his wife and several dozen representatives of the Polish authorities. 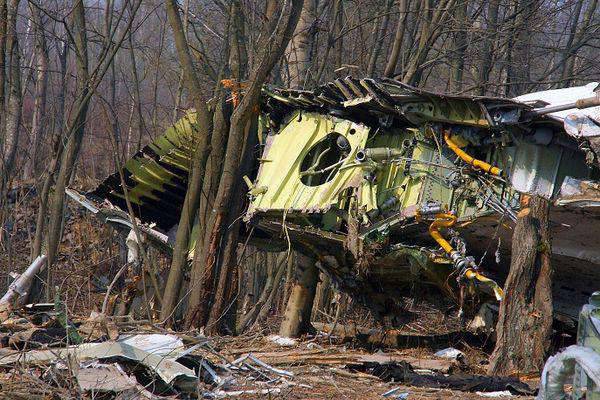 Of materials Supreme Control Chamber of Poland on March 9 2012 of the year:
It was found that since 2005, the visits of the Polish leadership using the special air transport of the country's air force have been carried out without observing the required level of security. There was a lack of a system of measures, and the existing rules were ignored in some cases, as in the 10 flight on April 2010. This flight should not have taken place in the form in which it was carried out.

It is, including the fact that the flight was, no matter how sad it may sound for many Poles, not a special flight (and the Polish delegation went to Smolensk to participate in mourning events in the Katyn Forest), but a sort of aviation accident during which high-ranking Polish officials poured in by the collar. Apparently, these same officials perceived the visit to the mourning events as a “fun party”, during which you can take on the chest and “have a good time” without much damage.

It was documented to be at the time of the crash in the cockpit of the Tu-154 pilots, who were under the influence of alcohol, the commander-in-chief of the Polish Air Force, Andrzej Blasik. It was Blasik with a mug, as he himself put it, a beer (recording voice recorders), in fact, gave the order to the pilots to land, despite the fact that the control tower informed the crew about the bad weather around the Smolensk-Severny airfield.

From the conversation with pilots Blasika:

The pilot for 15 minutes before the tragedy, meaning either returning or leaving for the alternate aerodrome (Vitebsk or Minsk):
Let's go back.

Blasik, demanding a landing in Smolensk:
It is a fact, we must do it, to the end. Do (fit) boldly.

Pilot:
What is this?

A stewardess, referring to an unidentified (by speech) person:
Will you drink

The report of the Interstate Aviation Committee states that there were no explosions or technical problems that 6 has been trying to repeat in Warsaw for all of the years on board the Tu-154. It did not happen. From the report POPPY:

The reasons for the crash of the Tu-154 aircraft belonging to the Polish Air Force are the crew’s erroneous actions: the decision to approach and the refusal to go to the second circle or alternate aerodrome in meteorological conditions worse than the established minimum, lower than the minimum allowable height in 100 m, and also ignoring the warning signals of the aircraft’s on-board systems about dangerous approach to the surface. The pilots made mistakes, being under pressure from the commander-in-chief of the Polish Air Force who was present in the cockpit. There are systemic flaws in the work and training of crew members while ensuring particularly important flight.

And now the head of the Polish Ministry of Defense, Anthony Maciesewicz (Anthony Maczerevich), on the TVP channel announces that in general everything is investigating, you know, “linden”, and that the “falsification” of the report on the causes of the crash Tu-154 took part (attention!) head (former) of the government of Donald Tusk. From the statement of the Minister of Defense of Poland (translation RIA News):
Tusk secured full control not only over the course of the investigation (in the case of the plane crash), but also over every decision of the state structures. Then he stated that he was fully responsible for everything that was in this case, what had been done, and the report was falsified, the falsification of the government report should have consequences. 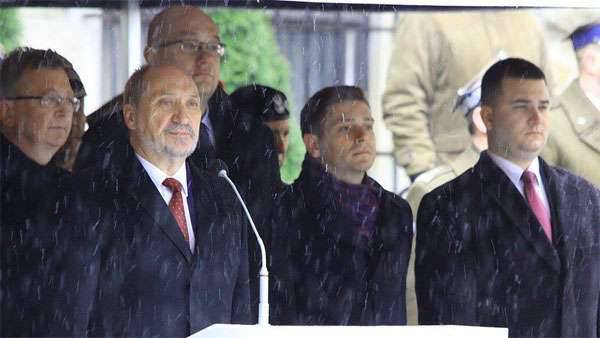 Macherevich second from the left (red tie with polka dots)

Well, as if by a wave of a magic wand, Polish “experts”, including individual politicians, began the next stage of pseudo-analytical tinkering, in which statements about “bomb on board” and “conspiracy of Smolensk controllers” slip. To these delusions, the fact that Donald Tusk is almost an agent of the Kremlin who was engaged in the “liquidation of numerous Russian tracks” is added.

And none of these “outstanding experts” in their publications say that if the “bomb” (although its absence was proven by numerous examinations, including an examination conducted by the Polish experts themselves who had no relation to Tusk) would suddenly be on board, then she had to get there in Poland itself, from where it followed the first board to Smolensk. And if so, then Warsaw should ask about the flight preparation services and their professionalism. If we talk about the "dispatchers' conspiracy", their only "conspiracy" is that they tried as best they could to indirectly sober up Mr. Blasik, who rolled a beer and distributed orders to the crew, without any protocol right to do so.

Although, if you continue to plunge into that Polish conspiracy quagmire, which Macerevich mentioned uses with a clear eye on a set of political glasses for a loved one, then you can only once again be convinced of the existence of the main principle of the current Polish government. This principle is rabid Russophobia. It is she who, in the form of constantly scurrying cockroaches in Macczevic’s head and others like him, dictates fiction about a “conspiracy” against President Lech Kaczynski in 2010, calls for the demolition of monuments to Soviet soldiers, the liberators, without whom today neither Poland nor , there is an opinion, Mr. Macherevich too ... This is a rabid Russophobia and some of its active ideologists dictate Warsaw to deploy the American missile defense system on its territory, knowing full well that after this, Poland becomes a goal.

The fact is that April for the Polish leadership is the month of the most significant psychological and political aggravation, on the basis of which images of enemies in the east are drawn, although the real enemies of Poland and its people have long been seated in bureaucratic chairs in Warsaw itself and are actively warmed up by friends from the West.

Ctrl Enter
Noticed oshЫbku Highlight text and press. Ctrl + Enter
We are
Polish claims to Ukraine. Will Warsaw decide to “bite off” Galicia?Situational analysis of the death of the MH17 flight (Malaysian Boeing 777), made on the basis of engineering analysis from 15.08.2014
Military Reviewin Yandex News
Military Reviewin Google News
77 comments
Information
Dear reader, to leave comments on the publication, you must sign in.