Will the German "cruisers" go to storm Kaliningrad?

April 12 2016
170
Without unnecessary noise and emotion in the shipyards of Germany, the construction of the first of four newest class destroyers "Baden-Württemberg" ends. These are real monsters by the standards of the Navy of the country, having a displacement of 7200 t. For example, the American cruisers "Ticonderoga" have 9600 tons. The first German “cruiser” will be commissioned already this year, presumably in November. The emphasis, as in the case of earlier frigates of the class “Saxony”, is placed on a powerful anti-aircraft defense. However, we will consider not the ships themselves, but the political consequences of their appearance in the Baltic, which will inevitably come and very soon. 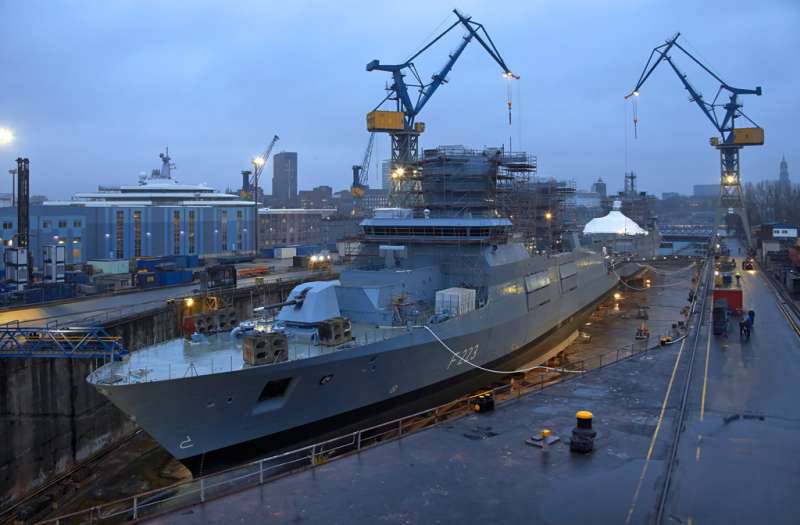 For example, it is not difficult to link the novelty of the German Navy with recent statements by the former US Ambassador to the Russian Federation, Michael McFaul, about the desirability of returning Kaliningrad to Germany, as well as many other events that have taken place around the Russian half-clique recently. A complete list of these events can be found on the Web by setting the appropriate time interval. One thing is clear - military clouds are gathering over the Baltic bastion of the Russian Federation.

For reference, the German Navy today is the 6 submarine; 3 air defense frigate; 7 multipurpose frigates (three of them will replace the four destroyers of the class "Baden-Wuerttemberg"); 5 Corvettes; 4 rocket boats and 15 minesweepers. Attention is drawn to the large number of large supply vessels, five of which have a displacement from 14 169 thousand to 20 240 tons. In general, in the supply courts, Germany already surpasses Japan in number, although it is behind the UK with its Royal Fleet Auxiliary.

For the Germans, Königsberg is even more a symbolic place than for the Russians - Crimea. This city from 1525 to 1701 was the capital of all of Prussia, and Prussia, as you know, later became the core of the German association. After the Second World War, in 1947 (March 1), the Prussian state as a source of “militarism and reaction” was liquidated by the Allies, and Koenigsberg became Kaliningrad, but historical the memory of the heirs of the Reich, of course, is difficult to cancel. And the true attitude of the Germans from time to time makes itself felt. So in 2010, one very influential newspaper “Bayernkurier” placed an advertisement on its pages inviting “to visit East Prussia occupied by the Russians”. And this is only one of the most scandalous examples. Needless to say, even if Germany officially recognized the Kaliningrad affiliation of the USSR only in 1970, and even then with a number of conditions.

It should also be remembered that Berlin, a quarter of a century ago, abandoned the purely defensive concept for its armed forces, having had time to actively participate in punitive actions against Yugoslavia and the occupation of Afghanistan. In the Russian establishment, blinded by oil and gas profits, these significant facts were preferred not to be noticed, and the “political analysts” on television screens did write about the benefits of the mythical German-Russian union.

The German fleet, with a slightly reduced total number of ships, still represents a very formidable force, and it was sharpened precisely under the blockade and capture of Kaliningrad, for there can be no other target for such large naval forces. Germany does not have overseas possessions or large foreign bases for the defense of which a similar fleet would be required. She does not have large remote islands, like the Swedish Gotland or the Danish Bornholm. Of course, we can assume that Berlin built such a fleet to participate in expeditionary missions within NATO, but here something does not fit. For expeditionary forces large landing ships and / or aircraft carriers / helicopter carriers are needed. Not one such ship is listed at Deutsche Marina, although it would not be a problem to build it for such a country. Consequently, the potential target is somewhere in range and for coastal airfields. You do not need to be a big mind to understand what this goal.

Why does Germany need such an adventure? In fact, this is certainly not an adventure, but a very specific geopolitical calculation. Europe's largest economic power is facing a dead end in its development. The potential from the emotions of combining 1990 year has passed. The economic effect of the opening of the markets of the former socialist camp also exhausted itself. And then there was the new barbarians from the Middle East ...

Against this background, the return of the old capital and the restoration of Prussia at its base may be the impetus for a new upsurge of German self-consciousness and military power. At the expense of Russia and on its fragments. Such an option would suit America completely, for Germany in Washington has long been prepared for the traditional role of a European troublemaker in opposition to an overly independent France and Great Britain. No wonder the French and British politicians figured in the recent Panama dossier, but for some reason the Germans did not. This is also a signal for those who can see. *

But for the success of such an invasion, it is imperative to remove Moscow from the game, which can be done only if the federal government collapses in the Russian Federation. Here it is necessary to refer an inquisitive reader to extensive materials on the Web about separatist sentiments, which have long been gaining strength in the Russian half-clique. The reasons for separatism are purely economic. Many elements of everyday life do not compare even with similar indicators in neighboring Poland and Lithuania, not to mention Germany. With the development of the economic and political crisis in mainland Russia, the slogan “Stop feeding ...” can take very, very many to the streets. It is clear that such a scenario will greatly facilitate the implementation of the most radical scenarios for the Germans.

So the emergence of as many as possible, and the most powerful destroyers in the Baltic, plus the political background that accompanies them, make experts think. Whether those on whom the adoption of key decisions in the Russian Federation depends is a threat is still an open question. More likely no than yes.

* Along with Germany, representatives of the United States, Canada, Israel, Japan, South Korea, Australia, New Zealand, the Philippines, Denmark, Norway, Finland, Turkey, Iran, Taiwan, Myanmar, and some others were not mentioned in the dirt. The conclusions are fairly obvious.

Ctrl Enter
Noticed oshЫbku Highlight text and press. Ctrl + Enter
We are
The state and prospects of development of the naval forces of Ukraine (2013)Results of the week. "Enter the ambassador citizen!"
Military Reviewin Yandex News
Military Reviewin Google News
170 comments
Information
Dear reader, to leave comments on the publication, you must sign in.