Sunken ships, which are visible through the water 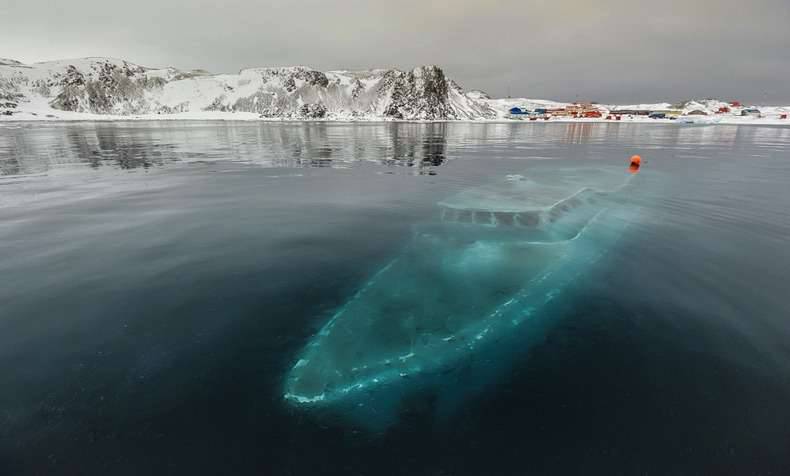 In total, according to the calculations of historians and oceanographers, the remains of at least a million ships of all eras are buried on the seabed. Most of the "drowned" found its end under the abyss of the high waters, away from sunlight and storms raging above. Nevertheless, the rare lucky ones managed to sink in the shallow water. They lie dead in the turquoise radiance of the depths, reminding us of the all-powerful ocean.

To gain access to such facilities do not need scuba and other special equipment. It is enough just to swim over them to see the silhouettes of sunken ships.

Brazilian research yacht sunk by ice and sunk at a depth of about 10 meters in Maxwell Bay in Antarctica. 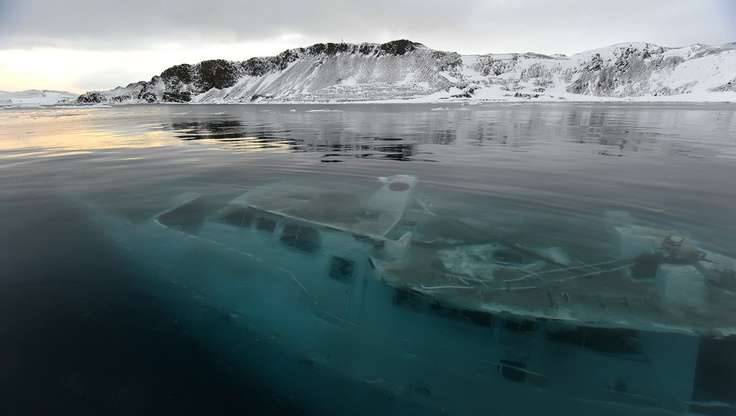 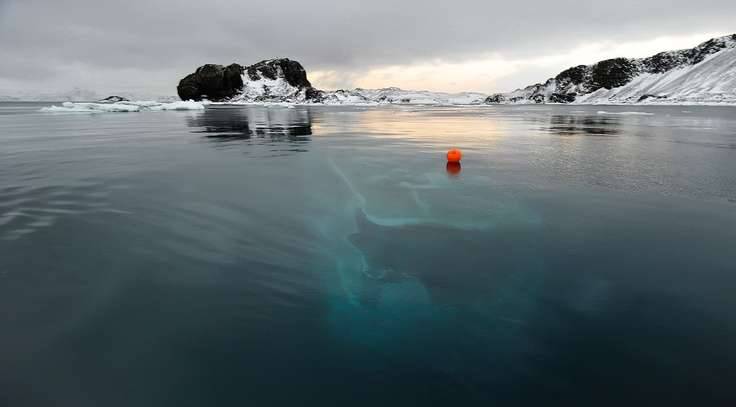 A nuclear test participant in a Bikini, he found his last shelter on the reefs of Kwajalein Atoll, 10000 miles from his historical homeland. 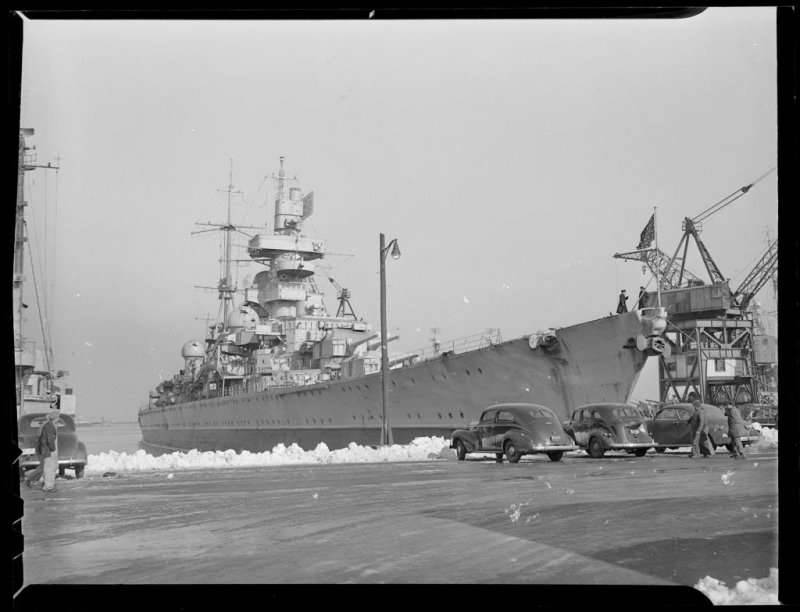 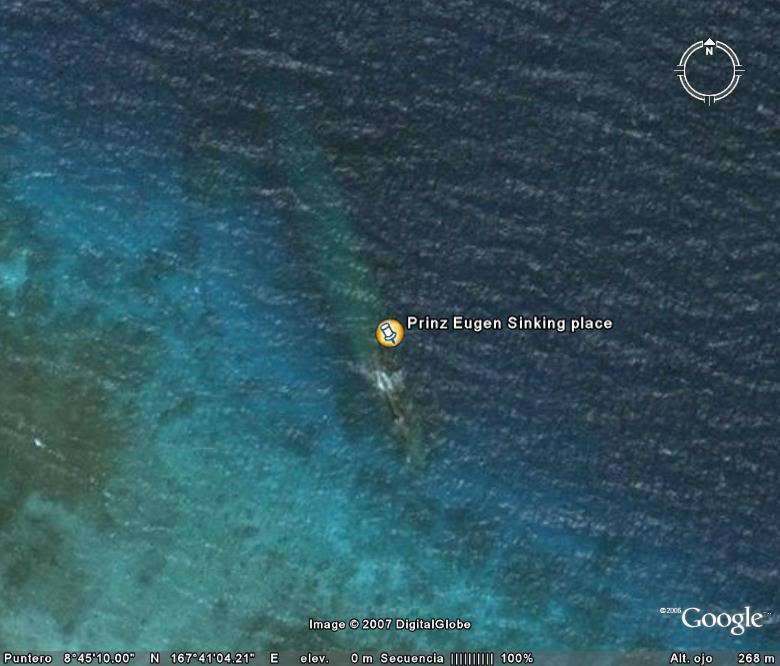 After the capitulation of Germany, the cruiser was captured by the Americans, who used the Eugen as a target. The ship resisted nuclear fire and was towed to nearby Kwajalein in anticipation of a new cycle of explosions. For the next six months, the cruiser slowly, compartment by compartment, was filled with water and tilted on the BB. At the last moment, the Yankees tried to save him, but, before reaching the shore, the “Eugen” overturned and sank in shallow water. Where it remains to this day, with shamelessly battened down the screws on the water. 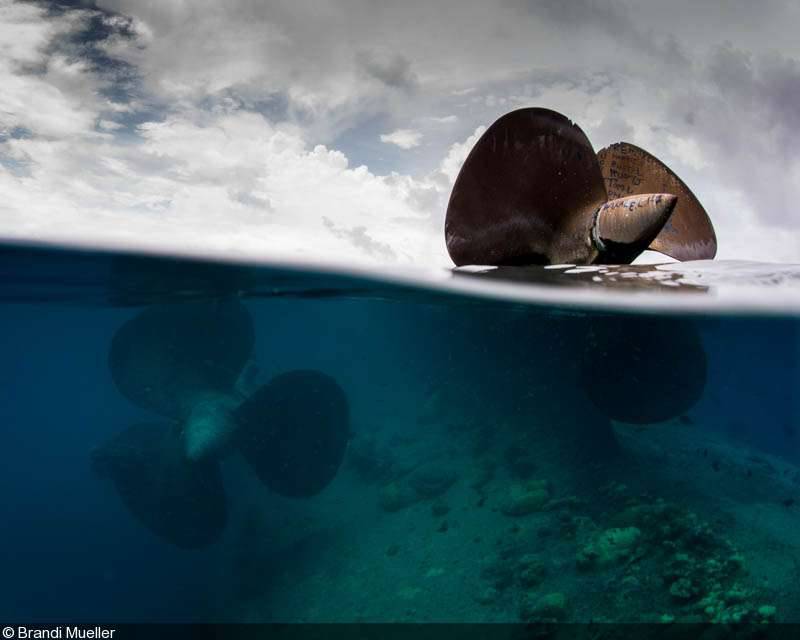 The picturesque remains of the schooner "Svipsteyks"

Old Canadian schooner sunk in the lake. Ontario in 1885 year. The remains of “Swipstakes” rest under six meters of clear water. This allowed the schooner to become a popular tourist site, making Swipstakes a part of the national natural park. At the present time, works are being carried out at the bottom of the lake to restore and preserve the remains of a 19th century schooner. 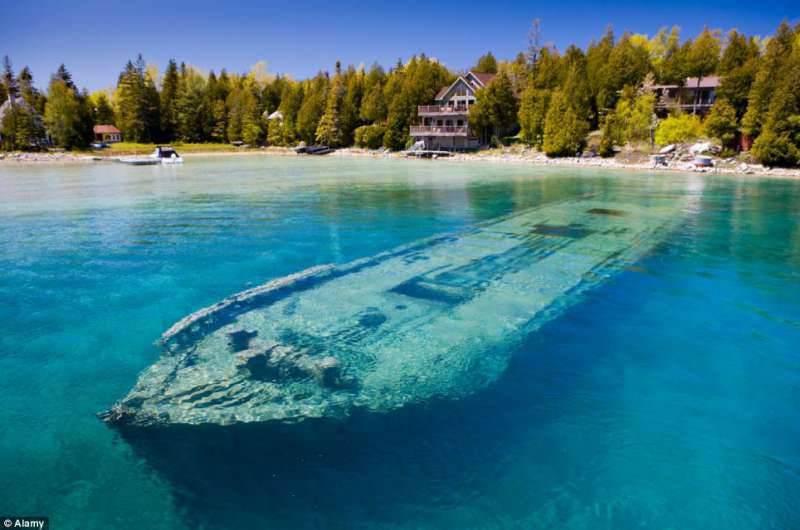 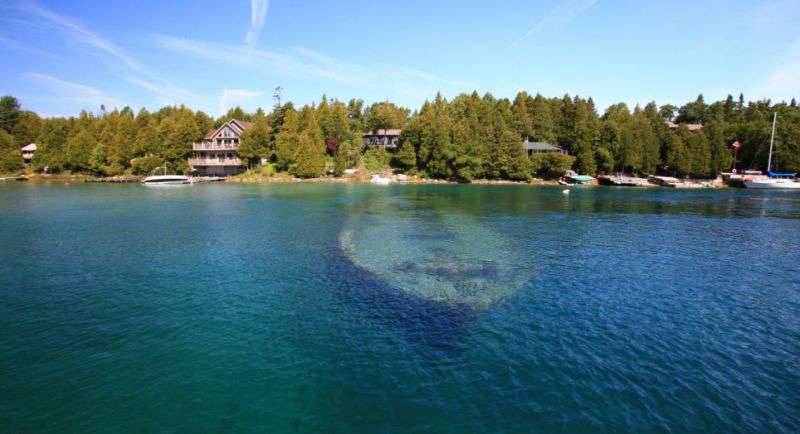 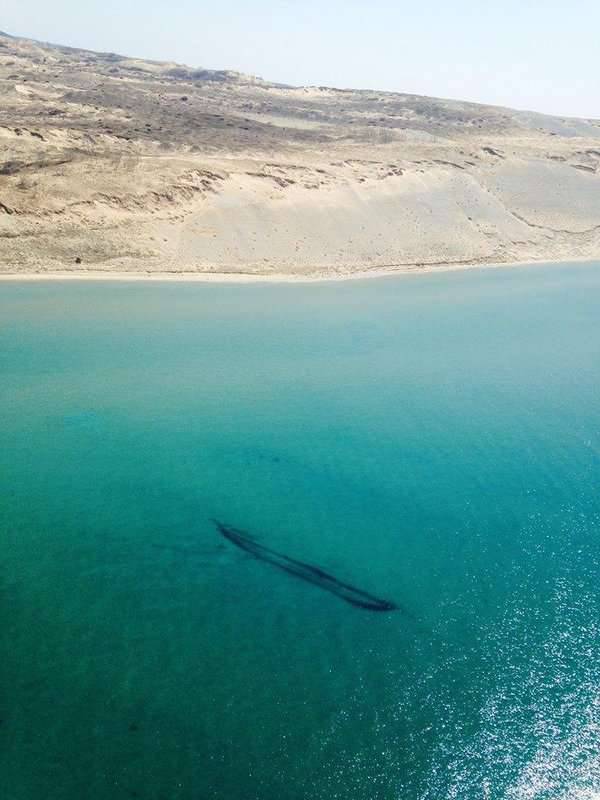 The skeleton of the brig "James McBride", sunk on the lake. Michigan in 1857 year. 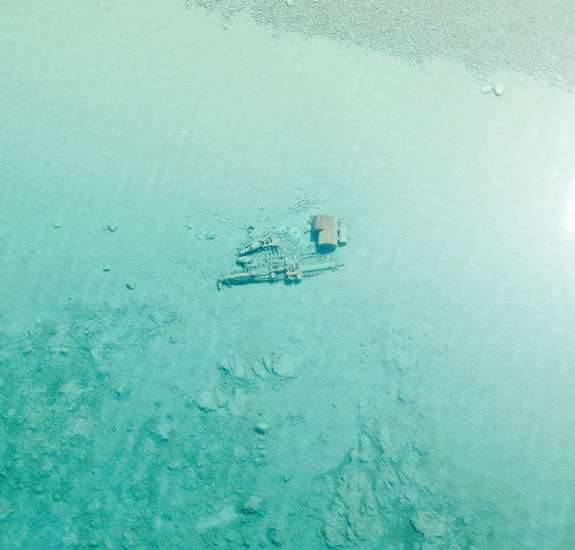 A pile of rubble on the site of the ship sinking, "Rising Sun". The ship was lost in a storm in 1917 year. 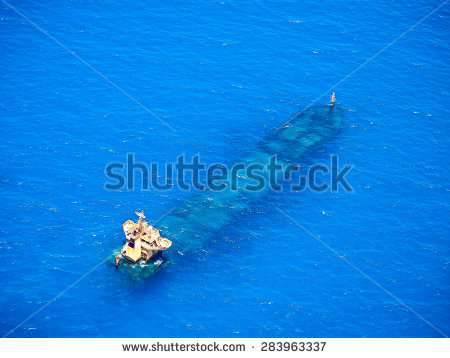 Unknown wreck whose photo was found on the Internet. 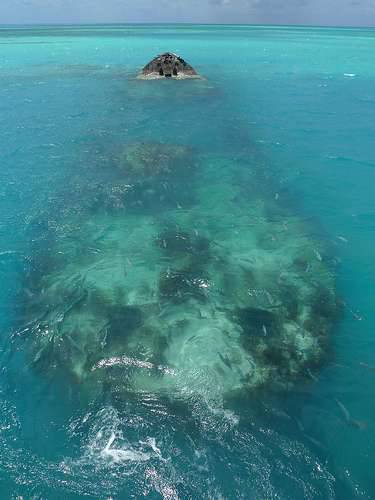 British armored ship “Vixen”, flooded as a barrier in Bermuda.

Tears of the battleship “Arizona” 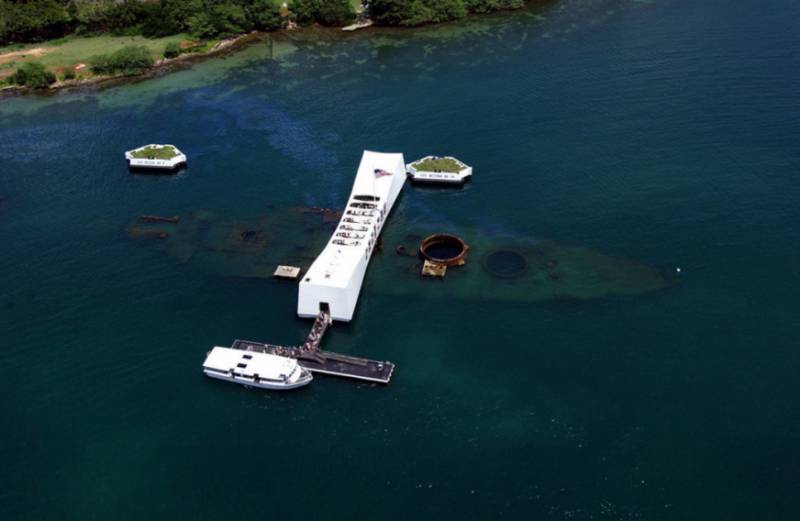 “Arizona” is one of two American battleships killed that day (the other six were returned to service). Four 800-kg bombs made from 356-mm armor-piercing shells hit it. The first three did not cause damage to the battleship, but the latter led to the detonation of the powder cellar of the bow towers of the Civil Code. The ship destroyed by the explosion sank to the bottom of the harbor, forever locking 1177 people in its compartments.

Nearby "Arizona", at the bottom of the Pearl Bay, another remarkable object rests. Sunken target ship (retired battleship) “Utah”. Smooth wooden flooring on the site of the dismantled towers of the Civil Code was adopted by Japanese pilots for the deck of an aircraft carrier. The samurai displaced their anger on the target instead of flying to bomb the oil base, the docks and other strategic facilities of Pearl Harbor. 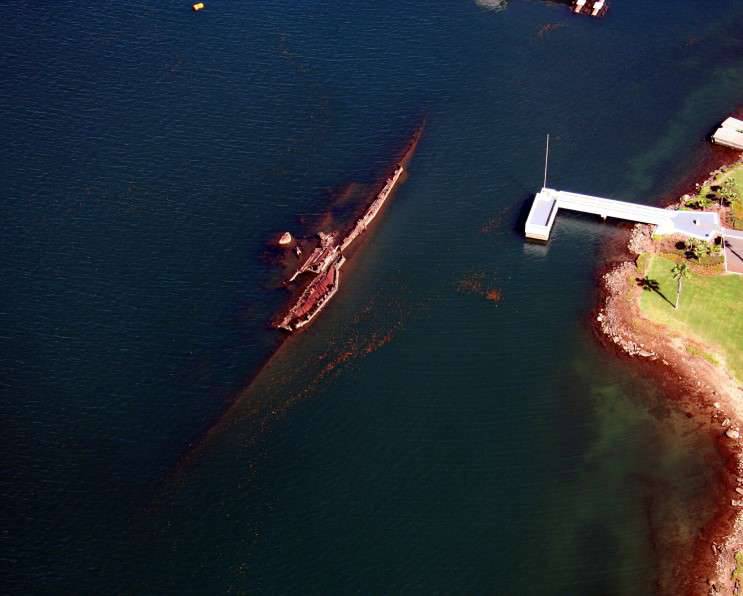 The last feat of “Ochakov”

Large anti-submarine ship "Ochakov" was used as a barrier at the exit from the lake. Donuzlav, during the “Crimean events” of the year before last. Being in a state of disability, the old BOD found the strength to perform the last task in the interests of the Fatherland. 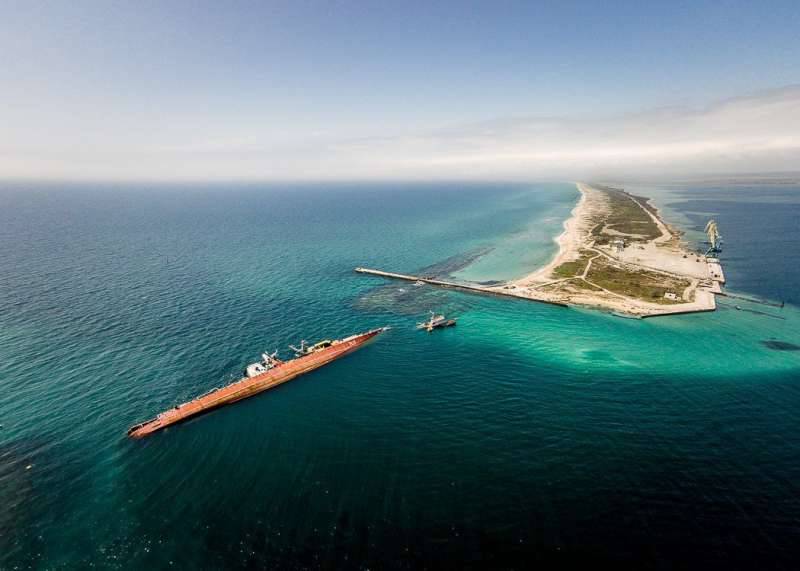 Unlike other ships from this list, the BOD hull was not completely hidden under water. But the epic of such an event is impressive!

Some ships managed to die without water. In the photo - an abandoned ship at the bottom of the dried Aral Sea. 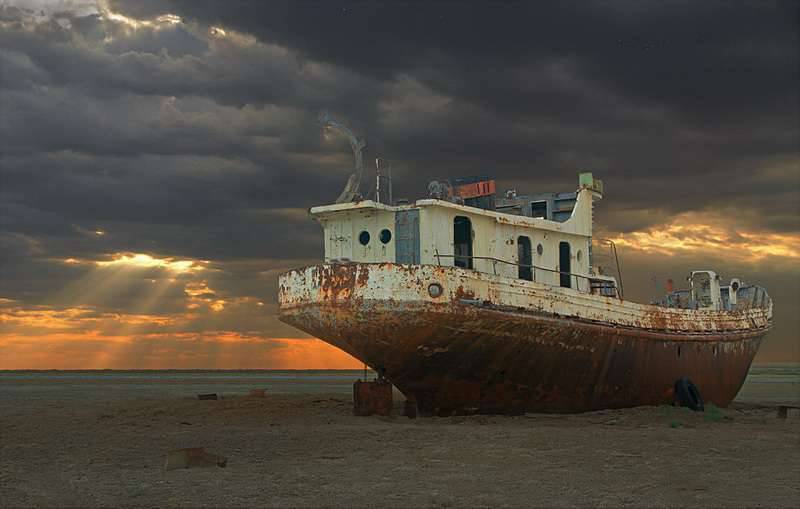 Ctrl Enter
Noticed oshЫbku Highlight text and press. Ctrl + Enter
We are
The cruisers of the 68 bis project: the Sverdlov missions in the post-war fleet of the USSR. 3 part"Svetlana". History of creation
Military Reviewin Yandex News
Military Reviewin Google News
75 comments
Information
Dear reader, to leave comments on the publication, you must sign in.