Space exploration of the USSR and the USA

April 10 2016
75
During the reign of Leonid Brezhnev, our country had a socialist social system or, as it is now called, Russian communism. And we continued to amaze the world with our successes in the most high-tech industries, requiring the highest level of development of industry and science. Such industries, in particular, include space and aviation industries. In the described time, Soviet cosmonautics continued to occupy a leading position in the world. 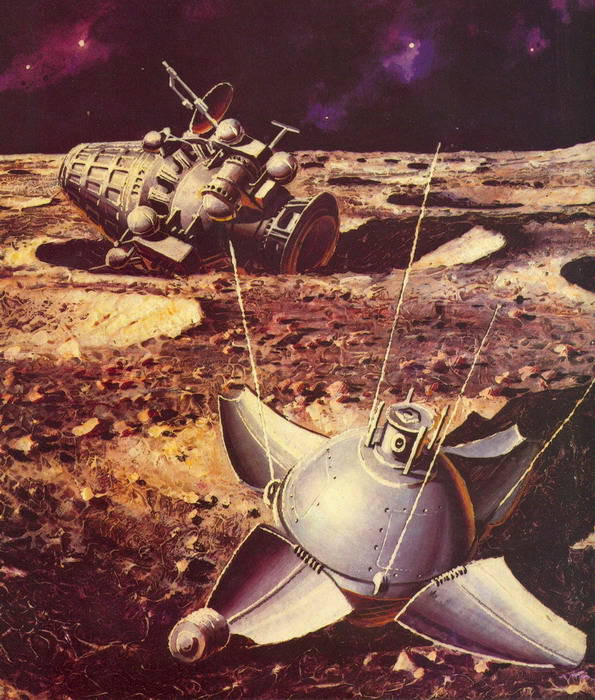 In 1966, the world's first automatic stationary lunar station Luna-9 was delivered to the moon. In 1968, the automated probe Zond-5 flew to the moon for seven days, flew around it, and returned to the earth. Two months later, in November of the same year, Luna-6 automatic station flew around the moon, carrying out the necessary scientific research. For two years, 16 interplanetary automated stations were launched to explore the moon.

“September 12 1970, the Soviet automatic station Luna-16 went to the moon, bringing 105 grams of lunar soil. Of these 105 grams, the USSR handed over 3,2 grams to the USA, that is, about 3%. Probably, we had the right to expect that the Americans would also transfer to us about the same percentage - about 1,5 kg of their samples from the first two expeditions, ”writes Yu. I. Mukhin.

In November, the 1970 of the year the Soviet interplanetary space station Luna-17 delivered an automatic self-propelled spacecraft Lunokhod-1, controlled from the ground, to the surface of the moon. In the period from November 17 1970 to October 4, 1971 passed through the surface of the planet 10 540 meters and transmitted about 20 thousands of lunar surface images to the earth. In addition, they were transferred to the earth more than 200 panoramas of the lunar surface and many other research works were done. Its weight was 756 kg.

The second vehicle, the Lunokhod-2, weighing 840 kg was delivered to the lunar surface 16 in January 1973 using the automatic station Luna-21 in the Sea of ​​Clarity area. "Lunokhod-2" worked on the moon for about one year and passed on the surface of the moon about 37 kilometers, conducting a lot of scientific research.

The interplanetary Soviet automatic stations "Luna-16", "Luna-20", "Luna-24" delivered to Earth, to the territory of the USSR, a lunar soil, called regolith. The Soviet Union is the only country in the world whose automated stations and vehicles visited the moon.

The current generation was told that the USSR was behind the United States in the field of space exploration and, in particular, the moon. Moreover, various liberal researchers call the time lag from 3-s to 5-years. It is strange to hear statements about our lag from the United States, from a country that in the twentieth century was never able to create a rocket for interplanetary travel with the delivery of the necessary cargo.

In rocket production and in the nuclear industry weapons The United States lagged behind the USSR for decades, and if the USSR continued to exist, one could say that we have lagged behind forever.

To hide their backlog, the Americans resorted to the help of cinema, the level of which allowed the public to mislead tales of flying to the moon and other myths. But they couldn’t conduct specialists, and today the boldest of them prove that the US astronauts never flew to the moon. In particular, this opinion is shared by the head of the Russian rocket and space industry, Leonid Viktorovich Batsura, who has worked in the space industry for about 40 years.

L. Batsura, the world's largest specialist in the creation of interplanetary spacecraft and space flight, in an interview with the newspaper “Tomorrow” about the design of the “lunar” “Apollo” pointed to a number of design features that clearly do not allow him to fly to the moon and sit down on its surface.

He also questioned the delivery of an American rover to Mars and expressed regret about Russia's senseless spending of billions of dollars on the implementation of the deliberately impracticable idea of ​​creating an “environmentally friendly” rocket engine powered by liquid hydrogen. Soviet scientists and designers proved the impossibility of creating such an engine back in the 1935 year, and V. P. Glushko experimentally proved it in the 1980 year.

But the pro-American lobby stubbornly pushes Russia to unjustified expenses, trying to deprive us of the possibility of improving Protons and Brizes and generally writing off the best rocket of the world as not conforming to environmental requirements, while expanding the use of our missiles in their new designs. L. Batsura, in particular, said the following: “But the Americans did not have it either in 1969, or today they have no real technical means of reaching the moon, landing on the moon, and returning people from the moon to earth.

How can you not notice that the Apollo, the shell of the take-off stage of which is covered with 25 layers of Mylar and one layer of aluminum foil, would expand to the shape of a ball when going into space and its shell would scatter to shreds?

How can you not notice that when landing on the moon, the landing engine of the descent module should have burned both the landing radar antenna, the landing gear and the bottom of the landing stage?

How can you not notice that when the take-off engine is working, its torch should burn both the coatings, the niches and the bottom of the take-off stage, overheat the tanks of the fuel components and destroy the entire level?

How can you not notice that under the scenario of the Apollo-13 accident, which experts in Russia, who defend the interests of the USA in Russia, “Apollo-13”, equivalent to 150 kg of trinitrotoluene, would disperse in the universe, crash into us?

Such questions, caused by inconsistencies in the official data and visible to any unbiased specialist, can be asked hundreds, if not thousands. The whole American "lunar program" - ... staging ... And many of our compatriots were far from her extras. I think the fate of Korolev and Gagarin strongly influenced them.

Very quickly, in the USA, they realized that they could not organize a demonstration manned expedition to the Moon, either before 2020 or before 2040. Can not! So they asked Obama to cover the program. He covered her. But now they have a declared priority - Mars. And there, as always, everything is “in chocolate”, the Hollywood “happy end” is obligatory. ”(Interview in the newspaper“ Tomorrow ”No. 34 of August 2012). Yu. I. Mukhin, in 2006, wrote a book with a volume in the 432 page called “The Moon Moon USA.”

One fact that confirms the significant lag of the United States from the USSR in the field of space exploration suffices, namely: the United States in the twentieth century did not create a single orbital station, that is, did not build a single "house" in space. In the 21 century, the United States built an orbital station. But in fact, the US space station was built by Russian scientists, engineers and workers. For the construction of the station, a high level of development of science and the space industry is needed, and for its launch into orbit a powerful rocket. This is probably why, until the collapse of the USSR, the United States could neither fly to the Moon, nor independently orbit the orbital station. They could not fly to the moon or to another planet after the collapse of the USSR. Mars is engaged in the same Hollywood who was engaged in flights to the moon.

The Soviet Union launched the Salyut orbital station back in orbit as early as 1971. In total, between 1971 and 1983, the Salyut stations were put into 7 orbit. Each Salyut station weighed about 18,9 tons, and the volume of residential compartments for astronauts was about 100 cubic meters. The delivery and crew change was carried out by the Soyuz and SoyuzT spaceships, and the fuel, equipment and other goods were made by the Progress cargo ships.

20.02.1986 was launched into orbit the Soviet orbital station for flights in near-Earth orbit Mir. And if the Salyut station can be called home, then for the Mir station it is more consistent with the name Palace.

The Mir station was designed to build a multi-purpose, permanently operating manned complex with special orbital modules for scientific and national economic purposes. The mass of the station was about 40 tons, length - about 40 meters.

The Gorbachev Perestroika reconstructed all the work on the construction of the complex, but the Mir station was flying until recently and could fly for many more years. The Russian government destroyed it under US pressure. It was obvious to every thinking person. Many scientists and workers in the space industry objected to the destruction of the station, which, in their opinion, was operational, fulfilled all the functions assigned to it and could be operated for a long time while carrying out the work provided for by the maintenance regulations.

The state of the station allowed our astronauts to work in it and see everything that happens on planet Earth. The United States could not allow such a defeated Russia in the Cold War, and we lost our palace in space. The experience of creating stations, accumulated by Soviet science, the work of Russian scientists, engineers and workers is embodied in the US station, which today flies around the earth, watching us.

In the 1975 year, the United States, seeing its lagging behind the USSR in strategic weapons and the inability to create missile defense, sought to obtain USSR signatures on the ABM and SALT treaties.

In order to achieve their goals, they temporarily moved from confrontation to friendly steps. In July, 1975, a demonstration of friendship between the USSR and the USA, was a docking and a two-day joint flight in space of the Soyuz and Apollo spacecraft. But this flight does not indicate the equality of our achievements and opportunities.

The Americans didn’t have a powerful spacecraft of the type of our “Progress” and, in my opinion, could not create it even now, despite access to our structures and technologies. Therefore, one must assume that they are still lagging behind the Russian Federation in the space industry. And it is quite obvious from the above examples that the United States lags behind the USSR for many years in the space industry and in space exploration in the 1960-x-1980-s. The one who claims the opposite, does it either because of hatred towards our country, or he fulfills an order well-paid by the West.

Ctrl Enter
Noticed oshЫbku Highlight text and press. Ctrl + Enter
We are
He defended his guardsSo were they there or not? 40 years since the last expedition to the moon
Military Reviewin Yandex News
Military Reviewin Google News
75 comments
Information
Dear reader, to leave comments on the publication, you must sign in.