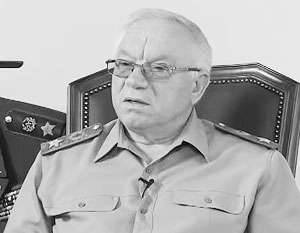 “Now, naturally, the National Guard military intelligence will become the subject of operational investigative activities, because in the fight against extremism and terrorism it cannot be without it. This will make the guard a full-fledged intelligence service, ”the former commander-in-chief of the internal troops, former Interior Minister Anatoly Kulikov told the newspaper VIEW, commenting on the presidential bill on the creation of the National Guard.

On Wednesday, a bill on the creation of a new power structure, which was introduced by President Vladimir Putin the day before, was announced in the lower house of parliament. If the document enters into force in this form, the National Guard will receive all the functions and powers that the Internal Troops of the Ministry of Internal Affairs had, and also take away some of the important activities of the police department.

“The troops will have a better base, training methods, discipline, weapons, test sites, equipment and everything else. Including its helicopters and airplanes "

As the newspaper VIEW, reported on the creation of a new department, subordinate directly to the president, it became known the day before, when the presidential decree on the formation of the Russian Guards was published.

According to the decree, the National Guard should be created by transforming the internal troops and joining some units of the Ministry of Internal Affairs, mainly power purposes, such as the SOBR, OMON, the rapid reaction force and aviation. In addition, the structure of the National Guard includes units of the licensing and permitting system of the Ministry of Internal Affairs that control turnover weapons and private security activities, as well as private security.

The National Guard will also engage in the fight against terrorism and organized crime. One of the objectives of the reform is to increase the efficiency of command and control of troops, but there is a transitional period in the law - for the first time, the operational control of the riot police and SOBR will be left to the Ministry of Internal Affairs, although formally they will be transferred to the Guard.

Former Commander-in-Chief of the Interior Troops of Russia, former Deputy Prime Minister - Minister of Internal Affairs, former State Duma deputy, now the head of the “Club of Military Commanders of the Russian Federation” Anatoly Kulikov told the VIEW newspaper about the difficulties that the new guard might face at first.

VIEW: Anatoly Sergeyevich, double submission always creates grounds for conflict. Will there be any disagreement between the Ministry of Internal Affairs and the new department during the “adjustment”?

Anatoly Kulikov: As of today, as stated in the decree, they have been withdrawn to the National Guard, but forces and means, for example, the same riot police and SWAT, remain under the operational control of the Minister of the Interior. As for the details, the implementation mechanism is still required. Of course, any business in the period of "grinding" carries with it difficulties for a period. Naturally, it will not be easy, but it is fixable. Practice will show.

VIEW: Why not leave it as it is? Do not leave SOBR and riot police just in the Ministry of Internal Affairs?

AK: I think so: the troops will have a better base, training methods, discipline, weapons, test sites, equipment and everything else. Including, for example, aviation control - its helicopters and airplanes. And the Ministry of Internal Affairs needs a reinforcement of some kind to help them quickly today. Suppose for the operation, for the protection of the perimeter, for the capture of a group.

VIEW: Does hardware competition, which can now begin with the National Guard and the Interior Ministry, benefit the cause? Similar to the one that unfolded at the General Prosecutor's Office with the Investigative Committee?

AK: I think this will not happen. It dealt with supervisory functions, subordination, and here there are completely different things. The troops used to be together with the police, and now they will be, so to speak, to help the police.

VIEW: One of the most important tasks that have been given to the guard is the fight against organized crime. The deputy chairman of the State Duma Security Committee, Alexander Khinshtein, complained that, as an independent line in the Ministry of Internal Affairs, it had been lost since 2008, since the abolition of the UBOP. He expressed the hope that now “own intelligence”, which explosives have, will join the fight against mafia structures. According to the deputy, such a department cannot exist without an operational component.

AK: This is the usual military intelligence. The internal troops were not the subject of operational investigative activities (PSA), since there was no law to this effect. But it was used, for example, in conducting counter-terrorist operations, operations to search for and eliminate DRG, criminal groups, armed criminals. Now, of course, the National Guard military intelligence will become the subject of operational investigative activities, because in the fight against extremism and terrorism is impossible without it. This will make the guard a full-fledged intelligence service.

VIEW: And who will follow this OSA for abuse? Previously, troops were monitored by the internal security service of the Ministry of Internal Affairs.

AK: It will be enough in the framework of the Main Command of the National Guard. It also has its own security service and military counterintelligence. There is someone there ... On the contrary, in the internal troops there has always been more order than in other structures of the Ministry of Internal Affairs - in the GUIN or in the internal affairs bodies. Mainly due to military discipline, due to greater rigor. And in the organs reigned some liberty.

Therefore, submission to the troops will be better. So I served a lot in the internal troops - from the 1963 year, starting with the school. I don’t remember any major scandal for the whole service. Yes, there were heavy emergency, death of people. But such that the frames were rotten, to show cowardice, do not perform their tasks or something else? This has never happened before me.

Corruption? Generally excluded. We had such a legendary commander of the USSR Interior Ministry Ivan Kirillovich Yakovlev. So we, the commanders of the division, were afraid to pick up the phone - to report to him. Because he skin down for the slightest incident. 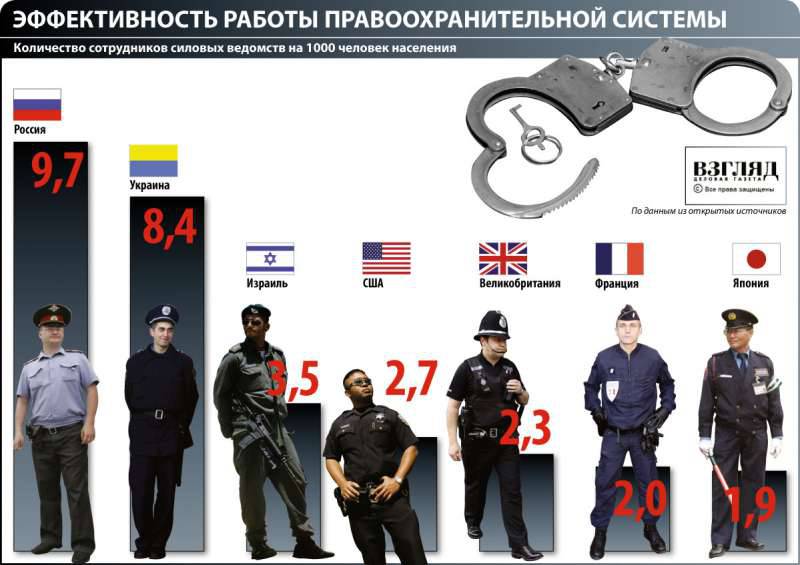 Number of police / police officers per 1000 people in different countries of the world
VIEW: You are not afraid that the National Guard will reconnoiter with subcontractors from the FSB and the Interior Ministry during the hunt for extremists in their jurisdiction?

At least that's exactly what we assumed more than 20 years ago, in the 1995 year when the concept was asserted. Only then we assumed to work on the model of the French gendarmerie. To free oneself, in particular, from the functions of the protection of correctional labor institutions.

We then transferred all the schools to a legal profile. The officers were taught to conduct a simplified inquiry, a protocol form to conduct an investigation in order to transfer cases to the courts, bypassing everyone so that everything was quickly and efficiently. But then, unfortunately, after 1998, everything was quickly forgotten, although Yeltsin approved the concept.

Now returned to this issue. I wonder what the powers of the National Guard officers will now be? Will they be able to conduct an inquiry, for example, in a simplified form to transfer the case to court?

VIEW: The National Guard will now oversee private security companies and will take over private security. 3 million people work in the security sector in Russia. How can they be used in the interests of the state, but without interfering with the competence of private business?

А.К .: After the First World War, according to the Versailles Treaty, Germany was allowed to have an army of no more than 100 thousand, and then almost all the officers left for the so-called small business. This is described by Erich Maria Remarque in his novels. Remember the "Black Obelisk", "Without Change on the Western Front"? Almost whole units, for example, all the officers of the company went into these structures. The Germans understood that it was necessary to preserve the officers.

VIEW: Already there are fears that the National Guard is created in order to suppress future social unrest. The former deputy chairman of the same State Duma security committee, now radical oppositionist Gennady Gudkov, told Kommersant that "the government is preparing for future shocks that are inevitable against the background of the crisis."

AK: Now you can attribute anything. The upcoming elections, the economic crisis ... But I will ask only one question. Look at Western Europe. Migration crisis, unrest - what happened in Germany on the New Year. And now what are students doing in Paris? Do we want this? Where is the golden mean? How to choose between security and human rights? What do you prefer? Most prefer safety.

The main purpose of the creation of the guard is to assess the new threats related to terror, what we observe in Western Europe. To be ready, to oppose this — this goal is pursued by reform, in my view. This is a justified measure.

Ctrl Enter
Noticed oshЫbku Highlight text and press. Ctrl + Enter
We are
Commentary on A. Petrov's interview “Fire and Tactics in the Russian Army: Another Look”Military reform as an integral part of the security concept of the Russian Federation: Systematic dynamic assessment
Military Reviewin Yandex News
Military Reviewin Google News
120 comments
Information
Dear reader, to leave comments on the publication, you must sign in.