Rogers Paper: One and a half trillion dollars for a paper airplane

April 8 2016
178
Today we are publishing the second part of our “sensational” story about corruption in the United States. Read Rogers - and the world will never be the same! 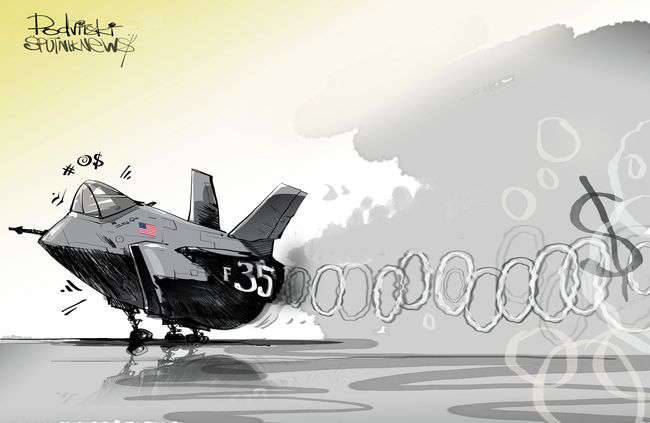 If the first part dealt with the banking mafia, which deals with the "development" of trillions of dollars, in this part the conversation will be about the military-industrial mafia. And in this area, the scale of cuts and kickbacks, though slightly inferior to banking, but not much.

There are so many major corruption cases in the US military-industrial complex that it is even difficult to decide where to start. Here and became the legendary mastering of budgets when creating the BMN M2 Bradley, in which Hollywood even shot the Pentagon Wars feature film. And the development of various types of "weapons future ”, which as a result turned out to be useless slag. And a bunch of weapons, which is an order of magnitude greater than the price of foreign counterparts (often yielding to them in characteristics). And unrealistically expensive (and equally stupid) destroyers of the Zamvolt class. And, of course, the main corruption project of the 21st century is the “universal” F-35 fighter, for the development of which a record amount of funds has already been spent, but it still doesn’t fly.

That's not counting the dozens of "small" DARPA projects, the development of each of which was unsuccessfully spent "only" on 3-5 billions of dollars. At the exit, only “ingenious discoveries” were obtained, such as the fact that the most repulsive smell is the smell of burning excrement (as any schoolchild knows about).

But the leader in cuts and rollbacks today, of course, is the flightless aircraft F-35 from LockheedMartin. 1,3 trillions of dollars have already been spent on its development (corruption? Never heard of it!), But so far this trough refuses to fly normally and remains, according to an authoritative publication "TheWeek", "Total disaster."

The F-35’s fifth generation undershoot concedes even the fourth-generation Su-35 in the majority of parameters to the Russian aircraft, not to mention the promising T-50. And if the Russian counterparts easily show the speed without a speed in 2 of Mach and higher, then there are big doubts in the supersonic status of the F-35 (despite the oath assurances of its chief designer).

In addition, by recognition American test pilots, it is not adapted to the dogfight at all, and significant software problems postpone its launch into the series for at least another year.

Its conditional “invisibility” is also possible only under the condition that it will not carry any mounted weapons, which makes such flights virtually meaningless. In addition, the new generation of optical detection equipment with increased accuracy and sensitivity comes into service with the Russian videoconferencing system, which completely eliminates this status.

The last argument that remains with the defenders of this bucket, supposedly saying “F-35 is capable of destroying opponents in advance, before approaching the maneuvering battlefield”, breaks about the performance characteristics of Russian air-to-air missiles. The Soviet / Russian P-37 Strela is capable of hitting targets over a distance of more than 300 km, the Americans have no comparable analogues today (the closest analogue of AIM-47 "Falcon" can shoot no more than 200 km). Moreover, the development of a new Russian KS-172 rocket, which will have an even greater radius of destruction, is now being completed.

The officially unrecognized failure of the F-35 development is confirmed by the fact that the Pentagon resumed orders for the outdated F-16 (developed in the seventies of the last century).

So it turns out that 1,3 trillions of dollars are released into the tube, but there is no one to blame. Corruption in the USA? Can not be!

All liberals and zapofofilam close your eyes and ears and do not read Rogers, otherwise your little illusory world will never be the same.

Ctrl Enter
Noticed oshЫbku Highlight text and press. Ctrl + Enter
We are
List of destroyed the largest and most high-tech enterprises"Our answer to Spielberg," or Should foreign films be banned - 2
Military Reviewin Yandex News
Military Reviewin Google News
178 comments
Information
Dear reader, to leave comments on the publication, you must sign in.