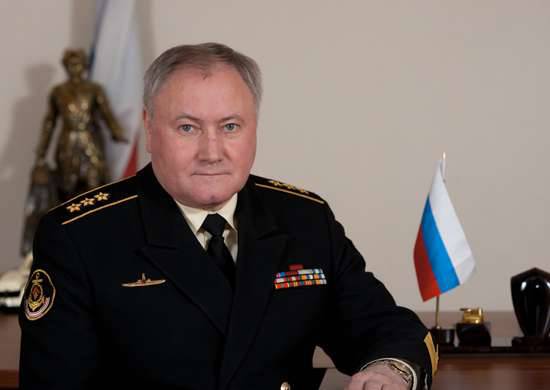 Vladimir Korolev was born 1 in February 1955 of the year in the Kashinsky district of the Kalinin region (now it is the Tver region). In 1977, he graduated from the VVFMU named after M.F. Frunze and received the post of commander of the electron-navigation group of navigator CU multi-purpose nuclear submarine K-467.

Site Ministry of Defense of the Russian Federation He offers a detailed fleet biography and a list of the available awards of the Commander-in-Chief of the Russian Navy, Vladimir Korolev, who replaced Viktor Chirkov in this post.

Since November 1984 - senior assistant commander of the 246th crew of the 6th submarine division of the Northern Fleet. In August 1987, after graduating from the Higher Special Officer Classes, the Navy was appointed commander of the K-387 multipurpose nuclear submarine of the 24th Northern Fleet submarine division. During military service in August 1991, he successfully completed the missions in the Mediterranean Sea in the face of active anti-submarine opposition aviation NATO Navy detachment.

From November 2007, Deputy Commander of the Northern Fleet.

In the autumn of 2008, he led the campaign of the warship detachment of the Northern Fleet, which fulfilled a number of important military and political tasks in the Mediterranean region and the Caribbean. Led from the cruiser "Peter the Great" international exercises "VENRUS-2008" in the Caribbean. Under his flag for the first time in stories the large anti-submarine ship of the Northern Fleet, Admiral Chabanenko, made the passage of the Panama Canal from the Atlantic Ocean to the Pacific and back, and also made a business call to the port of Havana in Cuba for the first time in the post-Soviet period of history, made calls to Venezuela and Panama.

From August 2009 of the year - Chief of Staff - First Deputy Commander of the Northern Fleet.

Since July, 2010, the commander of the Black Sea Fleet. He was the initiator of the restoration of the Temple of the Holy Equal-to-the-Apostles Prince Vladimir in the city of Sevastopol and the creation of the museum complex of the legendary 35 coastal battery in Chersonese.

From June 2011 of the year - the commander of the Northern Fleet. In the autumn of 2012, the surface ships of the Northern Fleet under its flag began to develop the Arctic and for the first time in Russian history they landed a naval landing on the New Siberian Islands.

In December, 2014 headed the joint strategic command of the Northern Fleet, reinforced by the Kola air defense formation, separate motorized rifle and Arctic brigades and aviation. The area of ​​command responsibility on the territory of the Russian Federation along the coast of the Arctic Ocean has expanded to the administrative border with the Chukotka Autonomous Region. Under his direct command in the 2015, the active creation of the Northern Fleet military infrastructure in the Arctic took place.

In April, 2016 was appointed Commander-in-Chief of the Russian Navy.

Member of 18 long-range campaigns on nuclear submarines and surface ships.

Member of the Presidium of the State Commission for the Development of the Arctic. Honorary polar explorer (2015).

Ctrl Enter
Noticed oshЫbku Highlight text and press. Ctrl + Enter
We are
The centenary of the navigational service of the Air Force of RussiaDay of the navigator service of the Air Force of the Russian Federation
Military Reviewin Yandex News
Military Reviewin Google News
20 comments
Information
Dear reader, to leave comments on the publication, you must sign in.