April 7 2016
50
The press service of the Naval Forces of Ukraine spread the message that an inter-fleet training session was held with the Turkey in the Black Sea. From the Ukrainian side, the frigate Hetman Sahaidachny took part in the training events. The Turkish side was represented by the ships TCG Salihreis and TCG Bartin, which previously arrived at the port of Odessa.


The representative of the press service of the Ukrainian Navy reports that Ukrainian and Turkish ships practiced interaction as part of a tactical formation of combat units fleet in accordance with NATO naval standards.

It is reported that the total length of the stay of Turkish ships in the territorial waters of Ukraine will be at least two weeks. 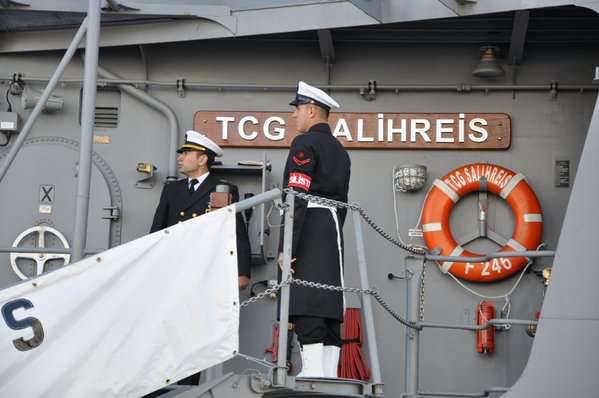 For reference: the Turkish multi-purpose frigate F-246 TCG Salihreis was built in 1997 in Germany by the Hamburg company "Blohm + Voss". Its name was in honor of the Ottoman Admiral Salih Reis. Represents the Barbaros ship class.

Speed: 32 knot on a gas turbine, 22 knot on a diesel engine. 4100 nautical miles is the cruising range at an average speed of 18 knots.

On board can carry a helicopter.

Ctrl Enter
Noticed oshЫbku Highlight text and press. Ctrl + Enter
We are
The action “Military service under the contract is your choice!” In Rostov-on-Don: future contract servicemen, exhibitions and “Russian Knights”
Military Reviewin Yandex News
Military Reviewin Google News
50 comments
Information
Dear reader, to leave comments on the publication, you must sign in.