Break not to build! In the face will not give 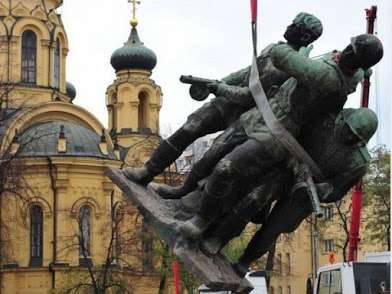 A little bit about the war of the Poles with the monuments, historical irresponsibility and effective counteraction.

I’ll clarify right away what the talk room is, and once again sigh about the terrible injustice and blasphemy - this, of course, is also not bad, but I’ll finish with a very concrete and quite interesting, as it seems to me, proposal from a historical perspective.

Let me remind you that the essence of the issue is that in Poland they set out to “make up for lost time”, according to officials, in the demolition of monuments erected in due time in gratitude to the soldiers of the Red Army for their liberation from fascism. Of course, everything is not as neglected as it may seem, since we are not talking about monuments erected in the graves of fallen soldiers. But the gesture is quite understandable!

The thing is that now Poland stands firmly on the path of securing the status of the victim of the aggression of the “terrible” USSR, in every possible way as much as possible, putting on the very fact of the liberation of Poland from fascism to the level of perception of its equivalent occupation by the fascists. I don’t think that it’s worthwhile to be distracted by the fact that the Polish people themselves made their choices and enumerate the merits of the Polish divisions and individual soldiers in the Red Army, as well as mentioning trifles such as the “invader number two” to Poland of the territories at the expense of defeated Germany, tom here speech!

Poland in its current aspirations has serious obstacles in addition to the above-listed trifles, which you can try and just forget, and one of these obstacles is literally embarrassing because even the very closest to the Young Polish Party can hardly explain why it is so many in Poland of monuments dedicated to the “bloody invaders”, and even with expressions of fervent gratitude to them — the “invaders” —from the liberated Polish people, many of whom still continue to be looked after, and what are you looking at? flowers, sometimes, bring ...

Somewhere does not grow together - can be seen with the naked eye. And, apparently, the children are beginning to suspect something! ..

An acceptable solution is obvious. To demolish everything that can be torn down without going too far - from a legal point of view, since Poland and Russia have an agreement on the protection of military graves. And then, having familiarized with the reaction and giving it a bit like getting used to society, get up to the rest.

The most remarkable thing for the Polish authorities in this is that breaking is really not building. And not only because "the soul does not hurt." And also because what to do, create, create - these are responsible actions. In this they will recognize you, for this they will remember you and for this they will ask you! And to erase, destroy, destroy - these are irresponsible actions! Irresponsible in the sense that, as a rule, they do not entail social responsibility. This is human psychology. People do not have the habit of evaluating what is not. They look at what is. And if they like this “what is”, then what difference does it once have, especially if they simply don't know this “once”?

That demolish everything without hesitation!

In this light, the question of considerable relevance in Russia is: how can Poland respond to such an unfriendly step? Explicitly aimed at denigrating one of the most significant historical periods in the history of our country, which represents, no less, an identity holding together many peoples of Russia and the former USSR! As usual, in the G + social network, I spent interview. The results are simple and predictable. 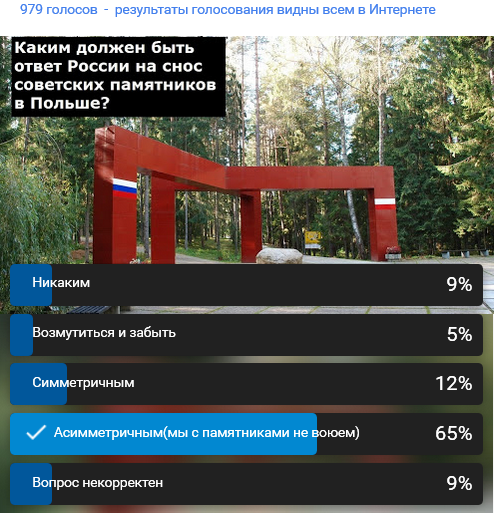 From my point of view, such results suggest that the people as a whole correctly understand the main thing - it is impossible to fight against the destruction of a part of memory, destroying another part of it! The survey itself simply could not cover the whole range of solutions, but judging by the comments in different communities, the greatest solidarity of the readers was caused by the proposals to transport the dismantled monuments to Russia or create copies of them here. And now I will try to announce my proposal.

And the proposal directly follows from the nature of the problem indicated and is once again reinforced by the above survey and the understanding that the Polish and Russian peoples, in spite of everything, are still too close to finally cut these relations, having broken each other. Moreover, it is the radical reaction of the Russian authorities, society, that will give the Poles a formal reason to develop the offensive on this front, already getting rid of the monuments at the graves of the soldiers and the graves themselves as the next stage. Because nothing to break! Need to build!

Specifically, to build a Russian-Polish Friendship Park around the Katyn Memorial Complex. And not just anywhere, but in this park to place all the memorials to Soviet soldiers, demolished in Poland, or their copies.

But this is me rudely. Now let you down more smoothly and present in detail.

If the memory is trying to destroy, destroying, then you can not answer the same. On the contrary, it must be restored, to compensate for the ruined. And to build something that will not let forget, and build so that it was impossible to ignore! Meanwhile, in Russia there is a memorable place, which by the will of history united the Poles and Russians. And even though the official history of this place for some reason seems to be the opposite, and indeed Katyn is perceived for some reason (dividing the nations), but this is completely unjustified.

Despite the fact that in fact there has not yet been a single point in the question of who shot Polish officers, and most importantly, how many were shot, they are literally in the same land with Soviet soldiers, the memorial of which is right there, what for some reason it is not at all customary to recall. And I personally believe that it is Katyn that should become a point of unity for the peoples of Poland and Russia!

On the territory around the Katyn memorial complex, I propose to build a "Friendship Park of Poland and Russia." The purpose of the park can be much wider than the site for the placement of destructible memorials. The territory would be worth developing to a museum-memorial complex of international importance. There you can also place a museum of Soviet Poland, necessarily - the Museum of the Great Patriotic War with exhibits focused on the role of the Poles in World War II. Technically, the parking in front of the memorial is quite possible to shift to the side. At the parking place, you can break the square of friendship with alleles for access to the memorials, as well as to the park, located a ring to the right and to the left of the public garden. Place replicas of monuments to soldiers-liberators dismantled in Poland in the park and in the park. The park can be broken by avoiding cutting down trees using existing landscape elements. Additionally, you can build a hotel complex near the park, in the park to arrange summer cafes. Organize a permanent route of public transport from the center of Smolensk to the museum complex. Also, near the museum complex, it might be worthwhile to arrange a year-round children's recreational and educational complex. That will not only increase the attractiveness of the project, but also bring immediate social benefits.

Yes, of course, the project is ambitious, even in a minimal version - what will be the cost of monuments alone! And by and large, we can say that he is even afraid of its scale. But we must not forget what tasks such a museum complex can perform! Not to mention the emergence of a serious excursion route in the Smolensk region, it will actually be an iron reserve for establishing long-term favorable relations with neighbors. After all, besides the function of preserving the historical memory of the USSR era and its rehabilitation in the eyes of the European public - and there is already a need for this, no matter how much we would like to think otherwise - this complex will in fact be a friendship park, within which it will be possible to implement many more subprojects of narrow focus. And what will cost only the museum of Soviet Poland, which will preserve for future generations a lot of positive examples, so diligently destroyed and thrown out from the pages of the history of the neighboring state.

Road going by walking! The fund, which accumulates funds allocated by the state, voluntary donations of citizens and organizations (and there will be many of them in Poland itself) and investors' funds, which can also be attracted, which is quite real - this is important, but the second side of the question, and the first is the will of the state! Therefore, the initiative has already been prepared for the ROI, tomorrow I will edit it based on the comments received - do not hesitate! - and as the moderation proceeds, let's proceed to collecting signatures. And there, in case of a positive decision ...

But, once again, I’ll pay attention, of course, such actions should be motivated not by petty vindictiveness: "Now the official delegations from Poland will be marching with wreaths in the shadow of monuments being demolished in Poland ..." No!

It is a historical perspective! After all, all these people that are now in power in Poland, they are not eternal. They will leave! And once people will surely take their place, who will not understand why Poland should be the antagonist of Russia and how it came to this. And then this remarkable memorial can not only serve to revive Russian-Polish relations, but also prove to be an invaluable source for reconstructing historical landmarks in this country, which is in many ways close to us, landmarks that are now trying to uproot barbarically , who once made a historical choice, for the sake of a handful of radicals and for the sake of the patron from overseas.