Feat and pain of Yemen 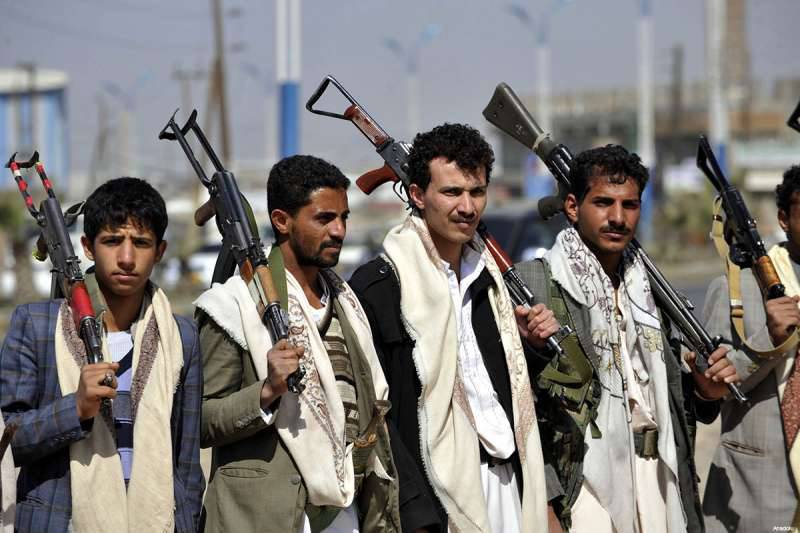 A year has passed since the invasion of the Yemen coalition led by Saudi Arabia. But, as before, these events are outside the international agenda. The war crimes and the humanitarian crisis in the country are ignored by world powers, which threatens to turn Yemen into a source not only of regional, but also of global instability.

26 March, Saturday. Al-Sabin Square, the largest in the capital of Yemen, is filled with people. Foreign journalists talk about tens of thousands of people, but perhaps there were an order of magnitude more. It seems that all of Sana came to the rally, dedicated to the anniversary of the beginning of the bombing of the country by the Arab coalition. Outraged people - men and women, teenagers and old people - chanting curses against Riyadh and its allies, vow to fight for the freedom of the country to the end.

This single impulse is not surprising. Intervention brought Yemen innumerable suffering, turning an already extremely poor country into a huge disaster center. According to the UN, as a result of the bombing killed more than three thousand civilians, including about a thousand children. But in Yemen itself, this data is not believed: there are thousands of victims talking about 30, and these numbers look much more realistic. The leaders of the military operation do not bother to choose their targets carefully, as a result of which bombs fall on densely populated urban areas, markets, hit hospitals and schools. 27 February Saudi aircraft destroyed the market in the town of Halek, Sana'a province. 32 people died, more than 40 injured. The consequences of an air strike on the market in the city of Al-Khamis (Hajja province) on March 15 were even worse. His victims were 119 people, including the 22 child.

Damage to Yemen cannot be counted. Arab aviation purposefully destroying social infrastructure, casting the country decades ago. As a result, 2,5 million people were forced to leave their homes, 13 million - half the population! - are on the verge of starvation, and in total, 21 million people in Yemen need humanitarian assistance. A difficult situation has developed in the healthcare sector. A quarter of hospitals are forced to stop working due to hostilities and lack of drugs. At the same time, the coalition not only brings death by bombing and shelling, but also strangles the country with a blockade. Under the pretext of protection against entry into Yemen weapons Saudi Arabia and its allies completely blocked the country from land, sea and air. This makes it impossible to deliver humanitarian supplies, including much-needed medicines.

The reaction of the “world community” to the iniquity is amazingly calm. At the beginning of the year, the Office of the UN High Commissioner for Human Rights sharply criticized the coalition, calling its actions war crimes and threatening to bring the matter to the Security Council. But it did not go further than threats. The UN responded to the monstrous crime in Al-Khamis only by chastising Riyadh and its allies, urging them to "take effective action to prevent the recurrence of similar incidents." It is difficult to imagine a more cynical response!

Such a selective attitude is connected with the status of Saudi Arabia as an important ally of the United States. But Washington itself participates in the Yemeni massacre. Human Rights Watch, in its latest report, called the United States the immediate party to the Yemeni conflict responsible for all violations of the rules of war. The paper provides evidence of this. For example, the United States represents assistance to the intelligence services of Saudi Arabia; American specialists work in the center of airstrike planning. Much of the weapons and ammunition used by Riyadh in Yemen are sold to the kingdom of Washington. Deliveries continue now. They include cluster munitions, the use of which by the Arab coalition has been proven by international inspectors.

Philip Bolopion, Deputy Director of Human Rights Watch, noted in this connection that, as accomplices in Yemen’s crimes, the United States does not tire of condemning human rights violations in other countries. “This is one of the most shocking examples of double standards,” he said.

But if the behavior of the United States is quite predictable, then the position of Russia cannot but cause bewilderment. Moscow has remained silent all year since the beginning of the bombing of Yemen, although the Houthite rebels repeatedly turned to it for support. Only in recent weeks, the Ministry of Foreign Affairs of the Russian Federation made several statements, but they turned out to be no less toothless than empty UN declarations. They also refer to the mass suffering of the population and the dire humanitarian situation, but not even a hint is contained in those who bear this suffering to Yemen.

Moreover, at the end of February, Russia supported in the UN Security Council the extension of sanctions against the Ansar Allah movement (the Hussites). In other words, the pressure is not on the aggressors in the face of Saudi Arabia and its satellites, but on the defenders of the independence of Yemen. Such diplomatic myopia could be forgiven in February 2015 of the year. Now, when all the masks are dropped, and the country is undergoing brutal aggression, to take such steps means to indulge Riyadh, which aims to completely destroy the opponents of its hegemony.

Also in Moscow, they continue to insist on the legitimacy of the puppet regime of Mansur Hadi, who rests solely on Saudi bayonets. This indicates a complete disregard for the real situation. It is worth recalling that the protege of the United States and Saudi Arabia, Hadi, became president as a result of the elections in the 2012 year. But, first, they elected him only for two years. Secondly, the legitimacy of those elections causes great doubts. There were no alternatives, and influential forces, including the Hussites and parties that advocated the independence of South Yemen, boycotted them. In 2014, Hadi’s powers were extended for another two years, but it was not the people who did it through a referendum, but the government, that is, the president’s inner circle.

The inability of the authorities to cope with the deep socio-economic crisis and its complete dependence on the will of Washington and Riyadh caused a powerful popular movement led by the Hussites. But even after joining Sanaa, insurgent detachments did not deprive Hadi of authority. This was done only after receiving irrefutable evidence of secret talks between the president and the Islamists, who organized a series of bloody terrorist attacks in the capital and several other cities. Hadi’s appeal to Saudi Arabia for an invasion finally made him a traitor to his native country. This was confirmed by the court held in Sana'a a few months ago. Mansur Hadi was accused in absentia of treason and assisting the aggressors in destroying the country.

Today, the Hussites are the only viable political force in Yemen, relying on broad sections of the population. In the conditions of war and blockade, they managed to establish order in the controlled territory, to establish a fair distribution of benefits that prevented what seemed to be an inevitable humanitarian disaster last year. In Sana'a, despite the constant bombing, schools and universities continue to operate, government structures are functioning, and the financial system has been preserved. It comes to the fact that officials in Aden, occupied by Saudi troops, receive a salary from Sana'a.

Islamists come to the fore

It is clear that without a well-equipped rear, the Hussites could not have achieved military success. And these successes are not just impressive - they are amazing. Despite the complete air supremacy and superiority in technology, the coalition forces for the whole year could not defeat the Hussites. Of the 22 provinces of the country, the latter retain full control over 11, with the most densely populated: about 70 percent of Yemen’s population lives in them. In addition, the Houthis make successful raids on Saudi territory and captured a number of border areas of the kingdom.

In other words, the “small and victorious war” that the Saudi authorities were counting on failed. The fact that a much stronger economically and militarily country (Saudi Arabia is in fourth place in the world for military expenditures) is not capable of defeating the Yemeni rebels for a second year can already be regarded as a defeat. For this reason, Riyadh decided to resort to more cunning tactics. In late February, it became known about the secret negotiations with the Hussites, initiated by the Saudi side. Already in March, this was confirmed by the Permanent Representative of Riyadh to the UN, Abdullah al-Muallimi. According to him, Saudi Arabia considers the Hussites as part of Yemen’s society, and therefore is not going to exclude them from the political process. Shortly thereafter, the special envoy of the UN Secretary-General, Ismail Ould Sheikh Ahmed, said that he had received the consent of all parties to the conflict for negotiations. As expected, they will begin on April 18 in Kuwait. A week earlier, the cease-fire regime should take effect.

However, there is little hope that negotiations will bring peace to Yemen. The Saudi authorities have repeatedly declared their commitment to the peace process. So, even 21 April last year, Riyadh announced the completion of the active phase of the operation and the transition to a political solution to the conflict. This declaration had no real consequences. We can recall the negotiations in Geneva, which began in December 2015 of the year, but crossed out by unilateral actions of the coalition that resumed the bombing. Finally, the Al-Khamis massacre took place after the announcement of Riyadh’s readiness to resolve the conflict.

Most likely, Saudi Arabia will seek to force the Huthis to lay down their arms and leave the major cities, promising them admission to political power. At the same time, Riyadh will not give up the ultimate goal (complete defeat of the insurgency). Only now he will move towards this goal not through open intervention, but along the Syrian path: through the full support of loyal groups. This will allow the kingdom, on the one hand, to formally get out of a protracted and increasingly dangerous war for him. On the other hand, continue to keep Yemen in the orbit of its influence.

As in Syria, the bet will obviously be placed on radical Islamists. From the very beginning of the intervention, al-Qaida detachments fought on the side of the coalition. Seeing the weakness of the supporters of Mansur Hadi, Saudi Arabia allowed the Islamists to occupy a number of areas. Today, al-Qaida fully or partially controls the provinces of Hadramaut, Abyan, Shabwa and Lahj.

In recent weeks, the United States Air Force launched several attacks on Islamist camps in Yemen, but it is naive to believe in the seriousness of Washington’s intentions and its allies. At the same time, the correspondent of the BBC television company, who visited the country, saw with his own eyes how the Saudi units, together with the al-Qaeda militants, were storming the positions of the Hussites near Taiz. But the Western media, who are sensible to the sensation, have ignored this message. It is obvious that they were given a clear statement: “not to notice” the Islamists in Yemen.

This can have the most negative consequences. The territory controlled by the Islamists in Yemen, already now exceeds the area of ​​the so-called Islamic caliphate in Syria and Iraq. Strengthening extremist groups with the connivance (and even direct support) of the Arab monarchies and the West threatens to further destabilize, and not only Yemen.

Ctrl Enter
Noticed oshЫbku Highlight text and press. Ctrl + Enter
We are
What in Yemen is mine to you?Interview by President Bashar Al-Assad to the Sunday Times
Military Reviewin Yandex News
Military Reviewin Google News
28 comments
Information
Dear reader, to leave comments on the publication, you must sign in.