April 7 2016
34
Last year, the defense industry of the Republic of Belarus for the first time demonstrated a new armored vehicle. For the solution of various tasks related to the transportation of personnel and the provision of its combat work, a mobile armored vehicle (MBTS) "Caiman" was proposed. A few months later, at the end of March 2016, the Belarusian industry published the first demonstration video showing the capabilities of the new machine.


Recall the existence of the project MBTS "Caiman" became known in July last year. The Belarusian Military Gazette publication in a publication on the work of the 140 Repair Plant (Borisov) spoke about the work of the enterprise, including the creation of new projects. In 2014, the plant was visited by President of Belarus Alexander Lukashenko. During his visit, the head of state set the enterprise a task: he should have created a mobile vehicle capable of finding application in both domestic and foreign troops. The result of this order was the project "Cayman".

It was reported that the development of a new armored car was spent only four months. During this time, the designers of the 140 Repair Plant formed the look of the car and determined the way it was created. The Soviet armored vehicle BRDM-2 was chosen as the base for MBTS Cayman. In the course of the new project, it was proposed to subject this technique to noticeable reworkings, after which the solution of new problems was to be provided. Soon, the new prototype armored car of the new type was built under the new project, the existence of which became known last summer. Then photos of the car were published. 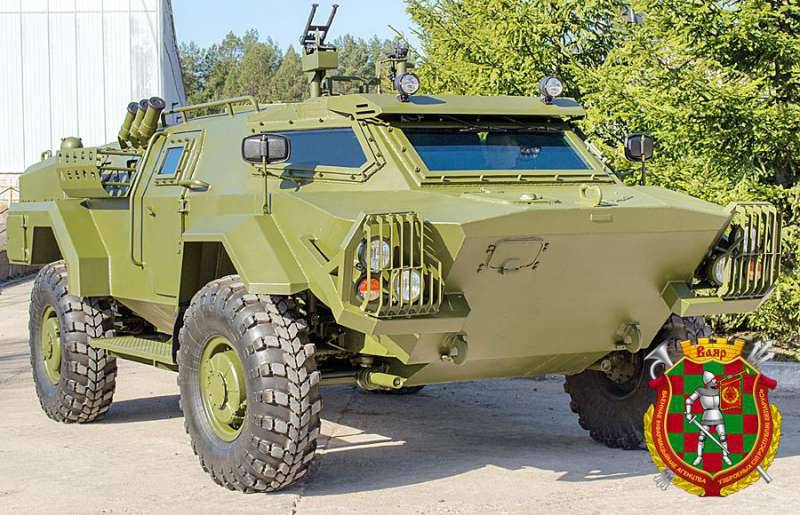 MBTS "Cayman" is intended for the transport of personnel or certain goods, so that it can perform a fairly wide range of tasks. The machine can be used for patrolling, escorting columns, as well as reconnaissance and sabotage. It is also possible to use technology in peacekeeping or police operations. Work is provided both in normal conditions and in emergency situations.

Published in late March, the video demonstrates the main features of the work of "Caiman". It shows that a promising armored car is able to move across rough terrain at fairly high speeds and transport troops. In addition, the machine is able to climb quite steep slopes, and without swimming to overcome water obstacles. If necessary, the fighters can dismount and start independent combat work. After landing, an armored car can support it with fire. In this case, the gunner-gunner also has the opportunity to leave the car and help his comrades "on the ground."

It should be noted, in view of the specifics of the proposed combat work, the demo video showing the capabilities of the Cayman Office looks quite monotonous. Within a few minutes the armored vehicle moves along various routes, and also lands or picks up the landing force. However, in view of the goals and objectives of the project, one should not expect anything else.

According to published data, the armored reconnaissance and patrol vehicle BRDM-2 of Soviet development became the basis for the armored car "Caiman". She “shared” some units with the new machine, which, however, underwent serious modifications. All this led to the appearance of a mass of external and internal differences. To improve performance and meet modern requirements, the base machine has been significantly modified, which makes it possible to consider the Caiman as a minimum, a deep modernization of the existing sample. 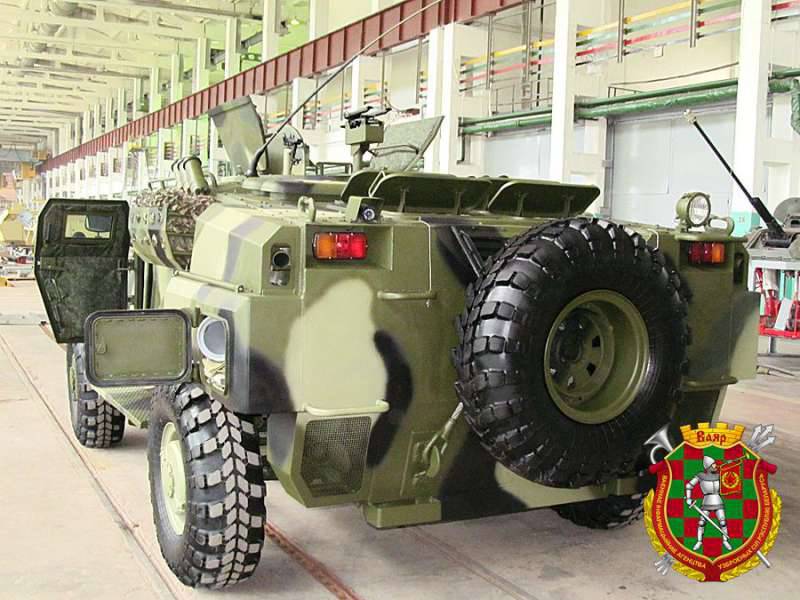 The body of the base machine has undergone the most noticeable changes. Modern armored vehicles should have a number of features that were absent in the BRDM-2. For this reason, the specialists of 140 Repair Plant radically redesigned the existing building, which as a result retained some of the details and received a number of new ones.

The frontal part of the body, in general, retained the existing shape when using some innovations. Thus, the upper front sheet has lost two windshields with armor covers. Instead, armor panes appeared on the front sheet and cheekbones, providing a full view of the front hemisphere. A small visor appeared above the windshield, covering the wipers from damage and serving as the basis for two headlights.

Another notable innovation of the Caiman project was the redesign of lighting equipment. Headlights, side lights, etc. were transferred from the upper frontal parts to the lower cheekbones. At the same time, all lighting units are mounted on sufficiently powerful frames and covered with characteristic grids. This was probably done to free up the upper frontal part and to improve the view from the driver’s seat.

The sides of the base BRDM-2 along the entire length were single vertical sheets. In the new Belarusian project, the side plate is divided into several separate parts. Thus, the upper inclined part connected to the roof was retained, and the vertical central reduced its height. Below it is attached to the inclined panel. An important feature of the deeply modernized armored hull was the use of side doors. In the upper and middle sheets of the boards are provided openings for the installation of doors. The latter are opened by turning forward and provide partial protection for the dismounted landing party. For greater convenience of work of fighters under the doors there are wide steps. 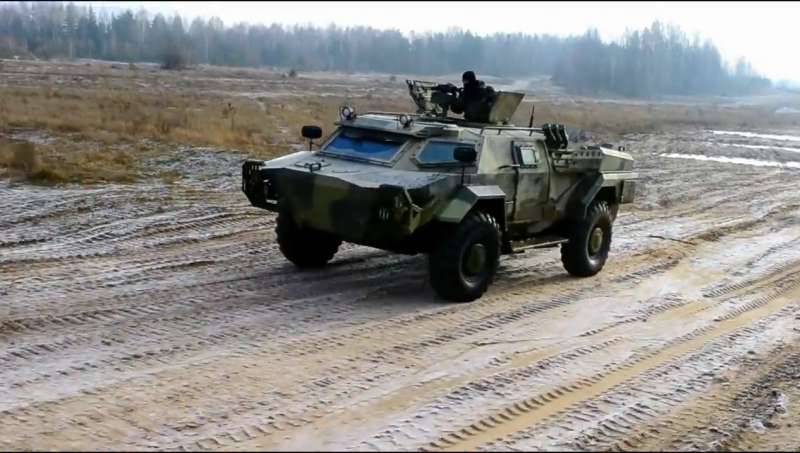 Armored car on the track. Frame from video

The aft part of the hull, in general, retained its shape, but the location of some units changed and several new hatches appeared. In addition, the window for installing the jet propulsion unit was removed from the hull's stern sheet. For cooling the engine and performing some maintenance work, four small hatches have been kept in the stern of the roof. It is proposed to install part of the lighting equipment and fastenings for the spare wheel on the stern sheet.

The layout of the internal volume of the body partially remained the same, but was refined in accordance with the new objectives of the project. In front of the hull are the driver and commander, the central given under the troop compartment, and in the stern are the engine and part of the transmission units. The assault unit of the MBTS "Cayman" is equipped with four seats for the fighters. For landing and landing troops must use side doors. The driver and the commander have their own hatches in front of the roof.

The demonstrated model of the new armored car does not have its own weapons, but it is equipped with systems that facilitate the use of personal weapons the crew. So, on the roof of the armored car there is a large hatch with a double lid, half of which open sideways with respect to the shooter. In front of the hatch, a device for mounting small arms, made in the form of a rack with a box on its upper part, is provided. This system allows you to use machine guns of the PC family, as well as quickly install or remove them. There is information about the possibility of installing other weapons, including automatic grenade launchers.

As an additional weapon is offered a set of smoke grenade launchers. On the top of the hull sides behind the troop compartment are mounted two groups of three grenade launchers each. With the help of these systems, the crew can put a smoke screen and under its cover to escape from the enemy. 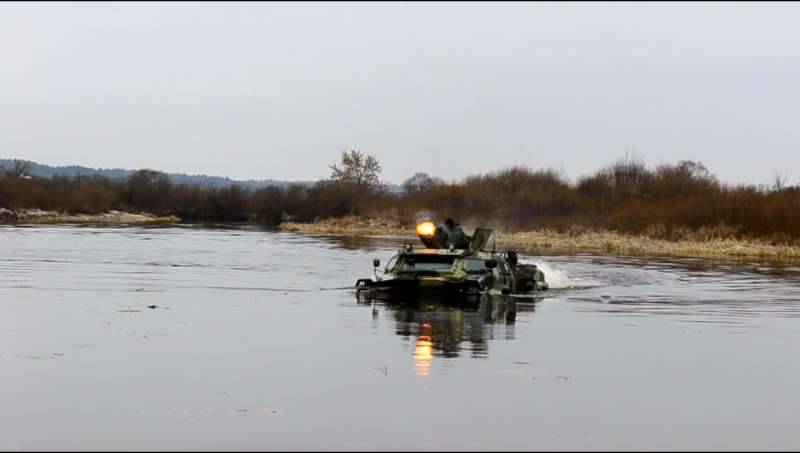 Movement on the water. Frame from video

The new Belarusian project involves the radical processing of the power plant and the undercarriage of the Soviet-made basic machine. So, instead of an outdated engine in the aft of the hull, it is proposed to mount the D-245 diesel engine with 130 horsepower, produced by the Minsk Motor Plant. The engine is equipped with an electronic fuel management system, and also mates with a reinforced five-speed manual gearbox and power take-off.

Instead of the old spring suspension, it was proposed to use an independent torsion bar. In addition, the Cayman is equipped with axles and wheel gearboxes borrowed from the BTR-60 armored personnel carrier. Such improvements can significantly improve the characteristics of the chassis. At the same time, a change in the undercarriage led to a slight increase in the chassis gauge, due to which characteristic multi-faceted wheel wings appeared on the body.

To move on the water, the prospective armored car is equipped with two new jet propulsion units. They are made in the form of two propellers located along the sides of the stern of the hull inside the protective covers. In order to avoid various objects and damage to the screws of the window covers are covered with a metal grid. Drive propellers through the power take-off.

MBTS "Cayman" has dimensions at the level of the base BRDM-2 and hardly differs from it in mass. The combat weight of the new machine is declared at the level of 7 tons. Thanks to the 130-strong engine, the armored car can reach speeds up to 110 km.h. Power reserve reaches 1000 km. It provides overcoming various obstacles and crossing water obstacles by swimming. 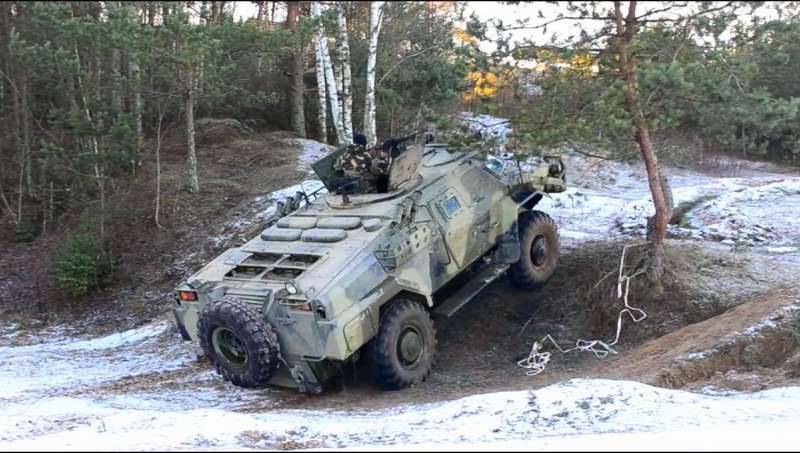 Rise on a slope. Frame from video

At the moment, it is known about the existence of at least one prototype of the Caiman machine. The exact calculation of this type of built-in equipment is hampered by the absence of full-fledged data and the difficulty in identifying it from the available materials. So, the first prototype of an armored car initially received a green color, after which it acquired a four-color camouflage. Finally, even in the summer of last year, photos of the prototype were published in a new camouflage coloration, featuring less bright hues. In this form, the car appeared in the recently published video. Thus, there is every reason to believe that by now only one prototype of the new armored vehicle has been assembled.

As follows from the latest data, MBTS "Cayman" is currently undergoing tests, the results of which may be a decision on the future fate of the project. Previous statements by responsible persons suggest that the Belarusian armed forces are interested in such equipment, but whether such an interest in real procurement will lead is not completely clear.

In addition to domestic armed forces, a new armored car may be of interest to third countries. The construction of an experienced “Caiman” on the basis of the BRDM-2 that was available speaks of the fundamental possibility of organizing a mass modernization of existing equipment in the interests of third countries. Thus, if the project is properly promoted on the international market, 140 Repair Plant can receive the corresponding orders and retool armored vehicles under contracts with foreign customers.

The Cayman MBTS project was developed about a year ago. Only a few have been published during this time. News, a series of photos and one video. It is unlikely that all of this can be called active promotion of development in the international market with the aim of obtaining profitable contracts. Nevertheless, the plant-developer and without an aggressive advertising campaign can count on orders of the Belarusian armed forces. At the same time, information about the intentions of the Ministry of Defense of Belarus to acquire similar equipment is not yet available.