April 13 2016
122
To begin, remember what was said in the article “We are all from Adam and Eve. We are all from the same ship ”(http://topwar.ru/87782-my-vse-ot-adama-i-evy-my-vse-s-odnogo-korablya-chast-2.html). And there it was told that the ancient ancestor of the haplogroup R1a lived in Europe around 5000-5500 years ago, but it is not possible to establish this more accurately. Well, as for our common European ancestors, they lived there and did 7500 years ago. But all the cultures belonging to this era are well known to us, and there can be no talk of any greater development of this or that nation. That is, their level of development was about the same, which was associated with the natural-geographical features of their habitat. Those who settled in the woods did not need racehorses, people who settled on the lakes lived in settlements on stilts, the steppe men rode on horseback and in chariots, and the northerners moved on skis towed by a horse. 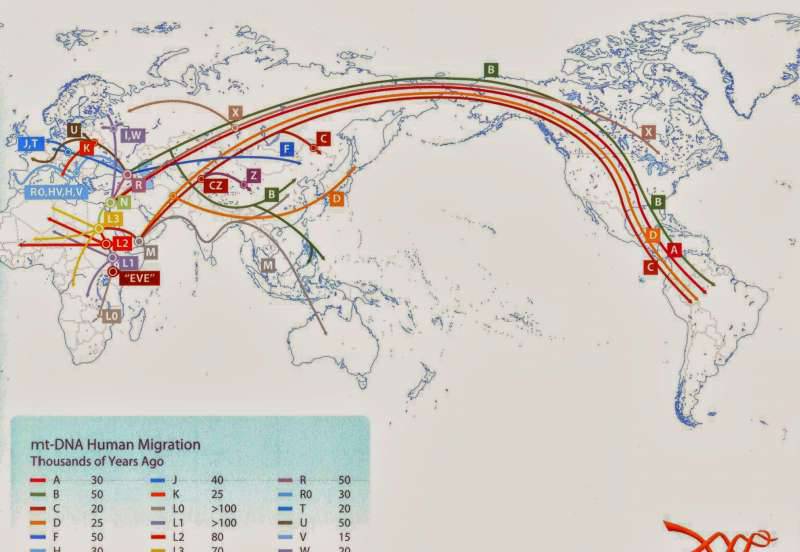 This map clearly shows which haplogroups are the most ancient, where and when they appeared, and where they then moved.

But with stubbornness worthy of better use (shoveling them into the hands and into the black work, digging the ground!) Other “historians” continue to zealously prove the universal primitive “Russianness”, the Kamennivka antiquity of the “superethnos of the Rus” and to majestically undefine the purpose. And then the country Hyperborea, from which we all came out at the dawn of civilization, loomed from some side, and it is clear that it was the Rusa that came out! "... It is hypothesized that a certain civilization center was once located in the middle and lower reaches of the Ob, from which the ancestors of the Slavs, and perhaps the Europeans in general, spread around the world." Well, yes, indeed, there is such an area, from where the haplogroup has spread throughout Europe. But he was by no means located in the North, and this, by the way, has long been well known. 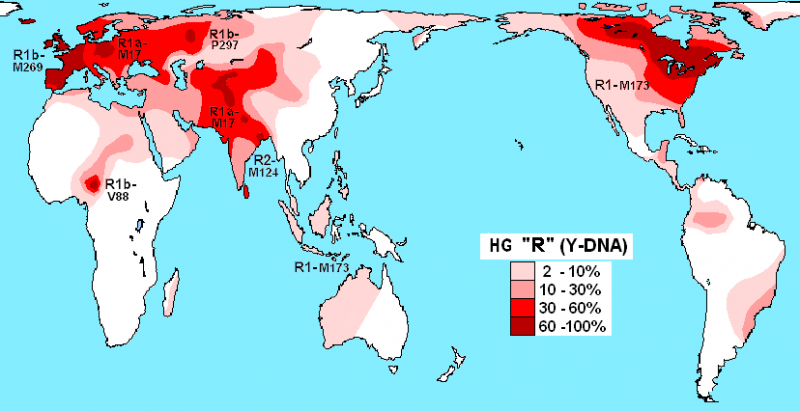 A map showing the distribution of the ancient haplogroup R.

Ah, yes - well, how can you not remember that there is such a "Denisovsky man." So that his poor, too, to the Rusam attributed. But only here it is not all the way our would-be treasurers would like. And since we remembered him, it makes sense to talk about how things are with him today in more detail ...

Yes, indeed, more recently, scientists believed that the most ancient inhabitants of the European continent were precisely “Denisovtsy”. But it was like this that back in 1976, in the Sierra de Atapuerca cave, not far from the Spanish city of Burgos, they found about four thousand bones and three dozen whole human skeletons, including the “Heidelberg man”, which is considered to be the immediate predecessor of Neanderthals. As a result, it was even renamed and given the name Sima de los Usesos, which in Spanish means “bone pit”.

Map of the distribution of haplogroup C, characteristic of the Mongols, Kazakhs, Western Buryats and Kalmyks. It has two main subclades: С1 and С2. The highest concentration is observed in ... Australian Aborigines isolated on their continent. This gives grounds for concluding that the carriers of this haplogroup are the descendants of the most ancient Asian population who were the first to leave Africa, but their genes are preserved in high concentration only in two regions isolated from each other: in Mongolia and in Australia.

And in December 2013, the geneticists finally managed to isolate the gene of the “Heidelberg man” and determine that he had more in common with the “Denis man” who lived in Asia, and whose remains were studied in 2010 by the biologist from Sweden Svante Paabo, as well as Academician from Russia Anatoly Derevyanko. It was their research for some time that allowed them to believe that the “Denisovites” were the first settlers in Europe. But doubts remained, and this same Paabo and a number of other specialists decided to analyze not only mitochondrial DNA, which is transmitted to descendants along the maternal line and is well preserved in burials, but also nuclear. 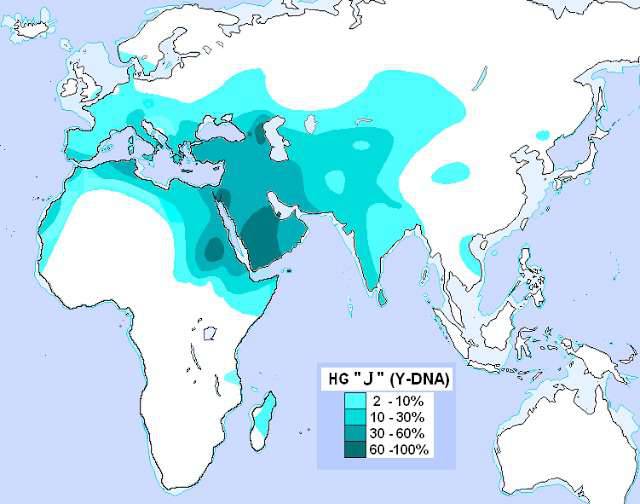 And here is how representatives of haplogroup J, which appeared 30 thousands of years ago, "wandered off" around the world.

As a result of the examination carried out by Paabo, it turned out that the 43% DNA of "Heidelberg people" consists of fragments of Neanderthal genes and only 7-8% of the "Denisov" genes. And if so, then the “Denis hypothesis” is incorrect. So the ancient aborigines of the Atapuerca cave are Neanderthals with only a small amount of “Denisov's” blood. In addition, the Paabo group concluded that 100 thousands of years ago, Neanderthals and people of the modern type had interspersing between themselves. This is proved by the fact that approximately 5% of the Neanderthal genes from the Altai have mutations that are characteristic of today's Africans. But the "Denisovtsev" these mutations are absent. This means that there were close contacts between Neanderthals and Altai and the Cro-Magnons from Africa.

Distribution map of the I1 subclade. It is known that haplogroup I is present in Europe in two subclades - I1 and I2, that is, north and south.

Distribution map of the I2 subclade.

By the way, Neanderthals DNA in Spain and Croatia does not contain “African” fragments, that is, Europe was settled from the East by land, as well as the East itself was settled by land ... from Africa, but only very, very long time ago, before the mass migration of Cro-Magnons from Africa. It also turned out to be an interesting fact that the “Neanderthal” and “African” genes were not compatible with each other, so that the offspring that was obtained as a result of such “crossing” was not viable. That is, Neanderthals, in fact, could destroy ... it was mixed marriages - that's how! 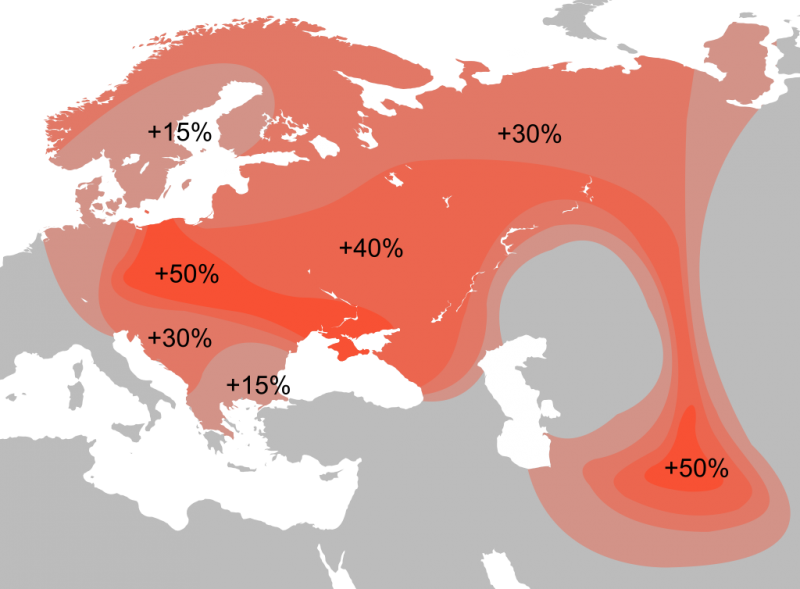 Map of the distribution of the haplogroup R1a.

So we figured out “Denisovtsy” and more, probably, we will not talk about them as the ancestors of the Slavs. But there is still the notorious Hyperborea, and what about it? And with her, this: back in 1903, the Indian nationalist B.G. Tilak wrote the book “The Arctic homeland in the Vedas”, where he tried to prove that the ancient texts of the Vedas and the Upanishads speak of the Arctic origin of the Aryans. And indeed in the north of Eurasia, the most ancient finds belong to the Paleolithic era, for example, the Diringa culture in Yakutia. But this culture is dated with a significant spread from 1,8 million to 250 thousand years. And it is possible that excessive aging of the chronology of this culture just gives rise to speculative arguments about the extra-tropical origin of man. However, we are talking about "super-ethnos of the Rus", and he, along with the mutation R1a, appeared when? About 5000 years ago! And where does the Paleolithic rubil from Yakutia? Yes, but later it became warm there, and people began to live there even at a later time! And why then they could not become just the very Hyperboreans in question? Yes, simply because our ancestors never left the "Russian" genes in the dominant volume in the north! That is, they are there, but the main genetic material is the Finno-Ugric genes, whereas in Eastern Europe, as well as in Northern India, they are not. That is, in the north there is no “center of Russian genes,” which means that there was not any “hyperborea” there either.

Another Eurasian haplogroup Rb. And who does not have it, starting with the Turkmen and Kazakhs and ending with ... the Irish! Moreover, the migration proceeded, judging by the nature of the mutations, from east to west, where it eventually ended!

Well, and now once again about what science says about our ancestors, and not fantasies “a la ukrain”. According to American and European scientists, the ethnic center of the Russian people appeared 4500 years ago precisely on the Central Russian Plain, because this place today gives indicators of the maximum concentration of the subclade R1a1, and hence the people of this haplogroup began to spread throughout the territories of Eastern Europe, as well as Siberia. The spread of the peoples who spoke Proto-Indo-European languages, including subclades of the R1a and R1b haplogroups, occurred west of the Don to the Dniester and the Danube, and also east to the Volga and Ural Mountains. 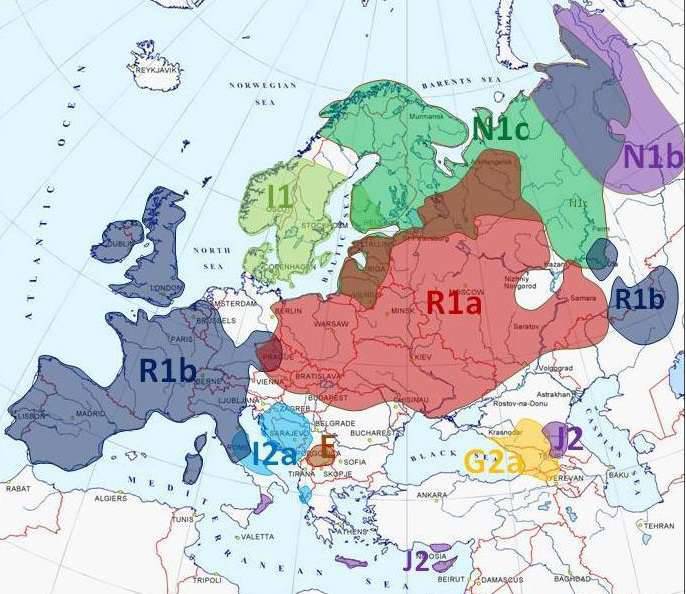 Map of distribution of the main European haplogroups. Of course, you can write that all this ... the machinations of evil imperialists who want to steal our antiquity from us. Well, out of harm, say. But there are studies of our Russian scientists, who verify this very thing and ... confirm it. This map, for example, is taken from our Russian research. See, Balanovsky OP Variability of the gene pool in space and time ... // Abstract of a doctoral dissertation on biological sciences. M., MGTS RAMS, 2012, C.13.

In the Black Sea steppes, most likely, there lived men of both haplogroups. So the haplogroup R1a is the “Russianness” from the point of view of modern genetics. All carriers of this haplogroup are biological or blood relatives who make up a single nation - Russian, and it has a rather ancient and glorious history to carry it along different sunken Atlantis, hyperboreans and lemurias. 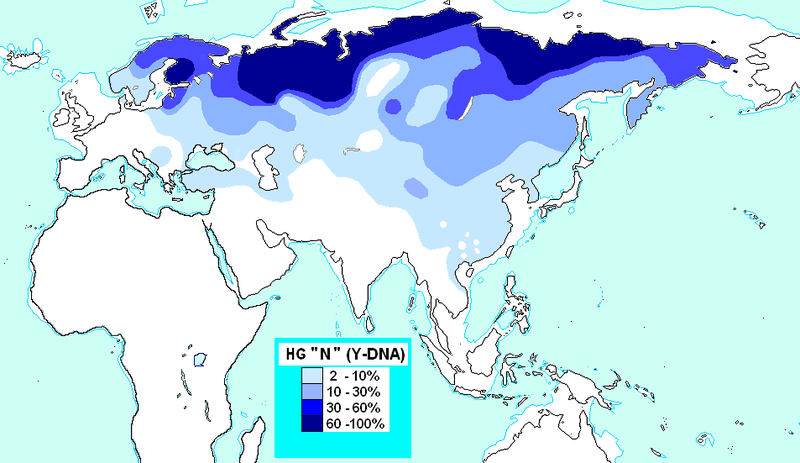 The distribution map of haplogroup N. These are Finns, Balts, Yakuts, Buryats. And look at the region in which they noted their genes? And where in this area are traces of R1a with a percentage equal to at least 50%. Is that all Hyperboreans were virgins to the grave?

In William Scott-Elliot's book, Lemuria, the Vanished Continent, published in 1930, was a map where blue areas of Hyperborea were highlighted. And everywhere there dominates the haplogroup ... N. So there can be no talk of any "northern homeland" of the Slavs.