April 12 2016
11
As already noted here, where the slaves were most, they were subjected to more exploitation, their conditions of detention were harder, which means they rebelled more often. So, in 104 - 99. it was in Sicily that the second mass uprising of the slaves happened. “Before the Sicilian uprising of the slaves,” Diodorus reports, “there were so many short uprisings and petty conspiracies of slaves in Italy that it seemed as if the very deity in this way foreshadowed a new colossal uprising in Sicily.” 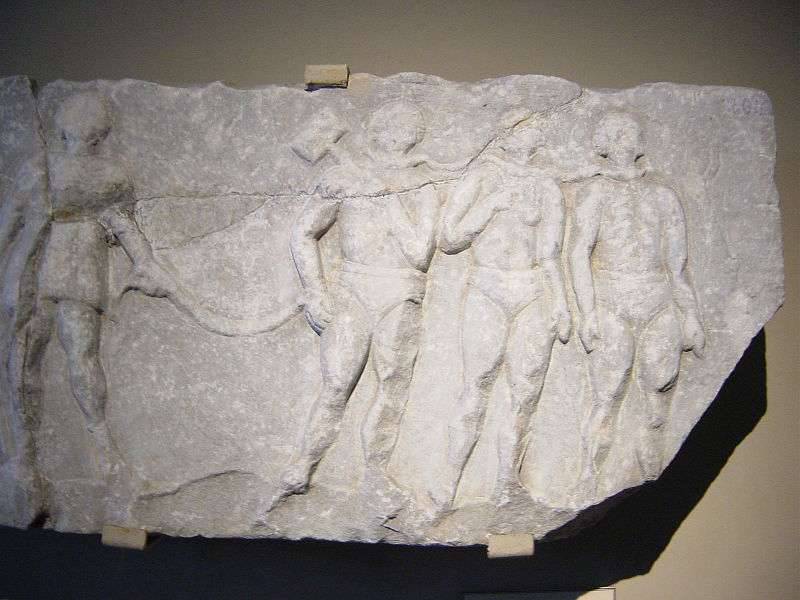 Interestingly, the Romans not only executed prisoners of slaves who participated in the Second Sicilian Uprising, but also captured them and sent them back to work, and also gave them to the gladiators. Captive slaves from Miletos. Museum of Archeology. Istanbul.

As stated by Diodorus, the cause of the uprising was the love of a certain Titus Vettius for one slave, whom he wanted to redeem, but he did not have enough money. However, he still took her to himself, and promised to give the money later. However, he didn’t find any money at all - it’s clear that the slave was quite expensive, and when the payback period came, he didn’t think of anything better than how to solve the issue with creditors by force. Arming their slaves with 400, he ordered them to go to the villages and raise a rebellion, and he, of course, decided to declare himself a king. Then he became already 700 people, and Rome sent to pacify this "ancient Dubrovsky" praetor Lucius Lucullus. He arrived in Kapuya, and having assembled an army in 4500 there, a man went to Vettiya, but by that time he already had an 3500 man under his command. In the very first clash, the slaves defeated the Roman detachment, but Lukull decided to outwit his adversary: ​​he bribed Apollonius, the commander of Wettius, and he calmly betrayed him. However, this was only the beginning!

Meanwhile, the tribes of the Cimbrians attacked Rome from the north, and the senate ordered the commander Guy Maria to call on the Allied states to help. 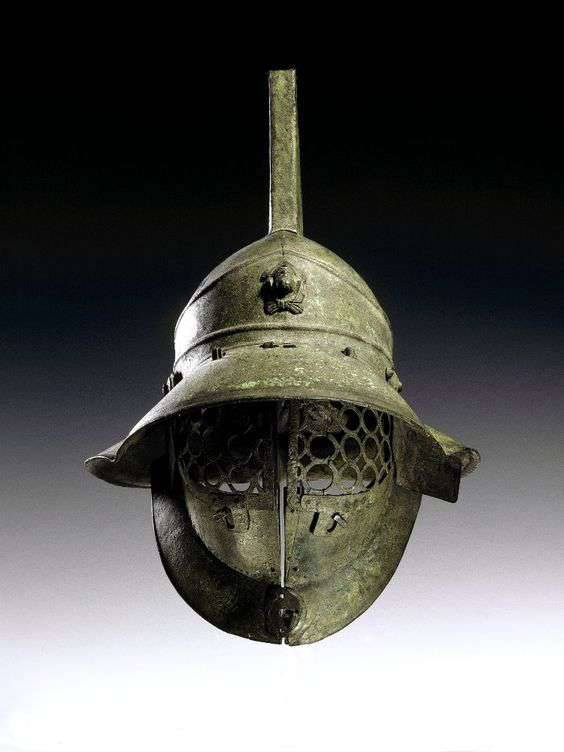 Thus, captive slaves again gained access to arms, however, now gladiatorial. But it was also quite effective in that era. Especially for the slaves. He, as well as armor, and weapons of legionnaires, were made in special workshops. And today we can judge him by the images of battling gladiators that have come down to our time and by real artifacts, such as, for example, this gladiator’s helmet from the British Museum.

However, King Vifinsky refused to help, citing the fact that he simply does not have people, since they were sold into slavery by the Roman dealers. The Senate did not like it, and he decided to release all freeborn subjects of his allies, who were in slavery for debt. Sicilian praetor Licinius Nerva also began to liberate slaves. And the slaves thought that they would free everyone, but only 800 people got their freedom, because the slave owners simply bribed Nerva, in order not to lose their working hands. Freedom slaves did not receive, considered themselves deceived and ... rebelled, because people do not like at all when they are deceived and do not fulfill the promise.

At night, on a sacred hill near the city of Syracuse, the slaves made a plan of rebellion, and that same night they began to put it into practice: to kill their masters. Then they occupied the high ground and prepared to defend themselves, but the rebellion was not destined to spread. A certain traitor gave Nerva all the plans. And he managed to deal with the conspirators, while they were still few. But this was only the beginning of the rebellion, which soon engulfed the entire island. 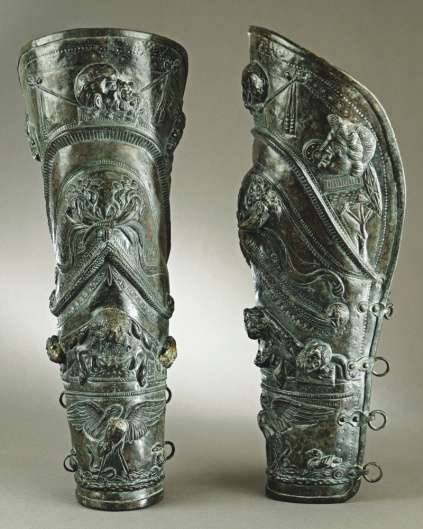 About how complex and expensive were the details of the armor of Roman gladiators, testify, for example, these bronze leggings found in gladiatorial barracks in Pompeii.

Literally, slaves revolted immediately in the western part of Sicily near the city of Hercules. At first, the 80 slaves killed Publius Clonius, who belonged to the riders' estate, gathered thousands of troops in 2 and also strengthened themselves on the hill. Nerva, who arrived in Herakleia, he did not dare to speak out against them, but sent a certain Mark Tacinius. And it all ended with the slaves destroying his squad and seizing the weapons that belonged to him!

When the number of insurgents reached 6 thousands, they arranged a council “from husbands, distinguished by prudence”, and, as usual, chose a king - a slave named Salvius (who later took the name Trifon), about whom Diodorus reports that he knew how to guess through the guts animals, skillfully played the flute and was experienced in various kinds of performances. So this is not only a modern trend - to choose actors for the authorities, in those ancient times people also sinned with this!

Sylvius divided the army into three parts, headed by his commander, who from time to time had to confer. Collecting an army of two thousand soldiers, Salvius moved him to the city of Morgantine, but he failed to take him, as slaves also defended him, to whom their masters promised freedom for that! But as soon as it turned out that all these promises were a deception, the slaves from Morgantine ran to Salvius.

In the western part of the island near the city of Lilibei also began an uprising led by a slave, the Cilician Athenion, known for his expertise in military affairs. Like Sylvius, he had the glory of an astrologer and predicted the future by the stars. He was also elected king, and his army numbered thousands in 10. Interestingly, in his army, he took only the most powerful slaves, and all others ordered to keep the farm and maintain it in full order. To protect the land of his former masters, as his own, was what he said the stars were opened to him, so the result of this revelation was the abundance of food from slaves. 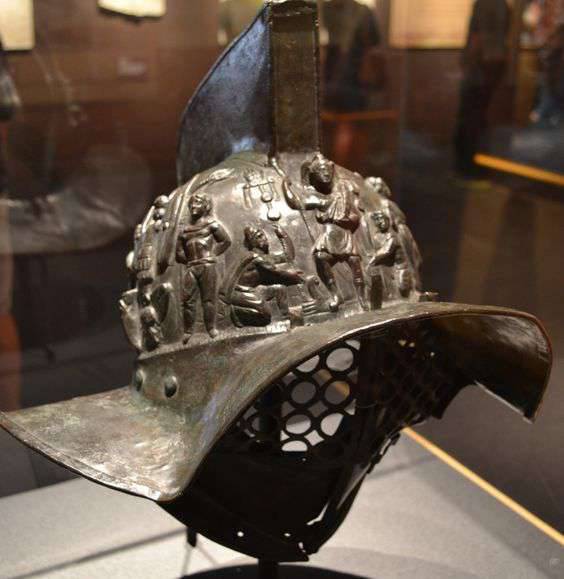 The gladiator helmet of Pompeii is a work of art. Even it is not clear why he was so needed. After all, the public in the Roman circuses was sitting far enough away from the arena and it simply could not look at small details! National Archaeological Museum, Naples.

True, he failed to take the city of Lilibey, but the uprising continued to spread. When Salvius approached Triokale and found out that Athenion was nearby, he sent for him “like a king for a commander” and he went to Triokale with his troops. Slave owners hoped that a rift would begin between them, but Athenion obeyed him, so that the hopes of the slave owners did not come true.

Although Rome was busy with the war with the Cimbri and the Teutons, it was still able to allocate an army of thousands of people under X.UMX under the command of Lucius Lucullus. A battle began near Skirteus, and Athenion fought in the front ranks of a select detachment of its warriors. Moreover, the slaves fought very bravely and fled only after Athenion was seriously wounded and could not continue the fight. However, he remained alive, as he pretended to be dead and thus managed to escape from the Romans! King Trifon took refuge in Triokal and was besieged by Lucull there. The slaves began to hesitate, but Athenion returned, considered dead, encouraged and not only encouraged, but inspired everyone so much that the slaves immediately left the city and defeated Lucullus, who had besieged Triokala! True, Diodorus wrote that the slaves simply bribed him. It is impossible to verify this statement, although it is known that Lukulla was recalled to Rome, where he was put on trial and even punished.
The same fate befell the next “fighter against slaves” - Guy Servilia, who was also recalled from Sicily and convicted of exile.

At this time, King Trifon died and Athenion was chosen as his successor, who decided to take Messana - a rich northeastern city, distant from Italy only by a small strait. Rome sent the newly elected consul Guy Acilius, famous for his bravery, to the cities of Messana. The battle broke out under the walls of the city, and Athenion entered into a duel with the Roman consul, and he himself was killed, and Acily was severely wounded in the head. As a result, the Romans won and began to pursue the rebellious slaves around the island. 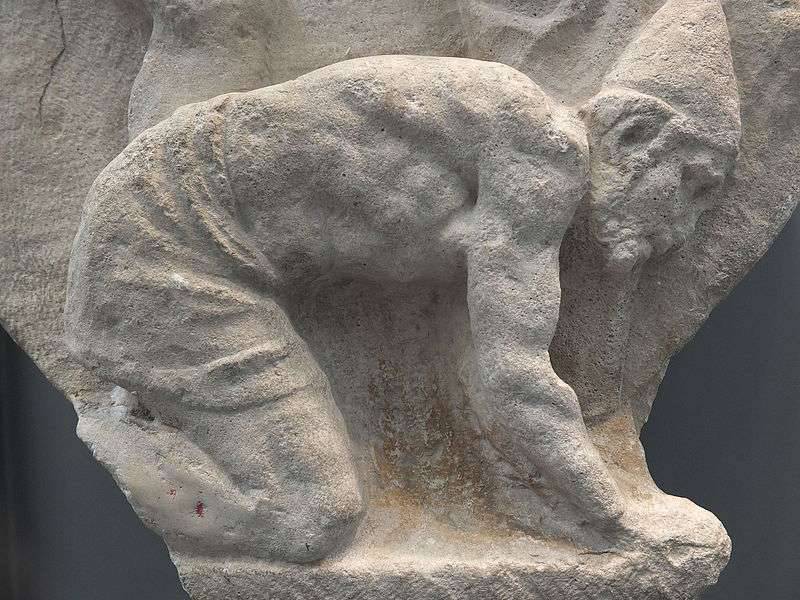 Only one small detachment of slaves, led by a certain Satire, ventured into an open battle with the Romans. And here Acily promised the slaves that if they surrendered without a fight, they would all be free and not be punished. The slaves believed and surrendered, but Acily had shackled them and sent them to Rome, where they were all sent to the gladiators. According to legend, so vile deception of slaves was so outraged that they did not want to fight for the fun of the Roman public, and agreed to kill each other right before the eyes of the guard and the audience. At the same time, Satyr was the last of all to kill himself with a sword. Thus, shame did not allow any of them to faint! 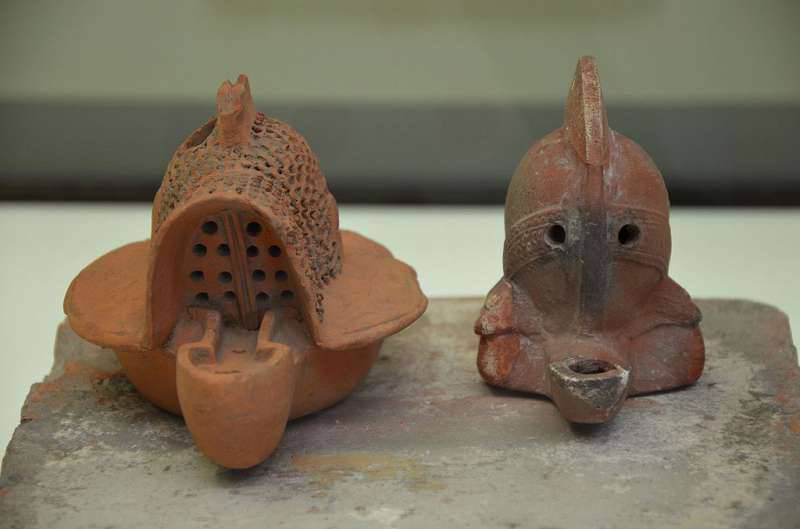 Ceramic lamps, made in the form of gladiator helmets. Roman-Germanic Museum, Coulomb, France.

Meanwhile, the slave rebellion began in Greece, in Attica, in the mines of Lavrion, where silver ore was mined and where the slave labor was extremely hard. The slaves conspired, interrupted the guards, then captured the fortress of Suny, which was nearby, and began to "rape and ravage Attica." This event, according to the historian Posidonius, happened simultaneously with the second slave uprising in Sicily. 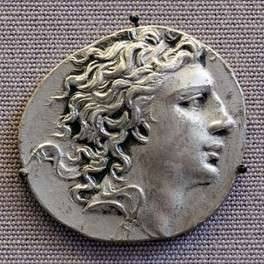 There was also a rebellion of slaves in the kingdom of Bosporus. Moreover, the main role in it was played by the local Scythian slaves headed by a slave named Savmak. The rebels slaves killed the king Perisad and elected Savmak as their king. True, the details of this uprising are virtually unknown. Although there is information that he fought for the independence of his state and tried to protect it from foreign conquerors, that he reigned for about two years and even minted coins with the inscription "King Savmak". The uprising was suppressed by the troops of King Mithridates Eupator, and in time it also coincided with the second uprising of slaves in Sicily!

Author:
Vyacheslav Shpakovsky
Articles from this series:
"Slave Wars" in the ancient world. Uprising to Spartacus. (Part one)