Where are they so much gold?

April 7 2016
150
Russia, whose gold reserves were plundered in the Yeltsin era, is now buying a lot of gold abroad, and has also become the world's second gold mining country (after China). The 100% purchase of domestic gold, notes economist F. Engdal, significantly supports the mining industry. Not only Russia and China, but also Kazakhstan are betting on gold. 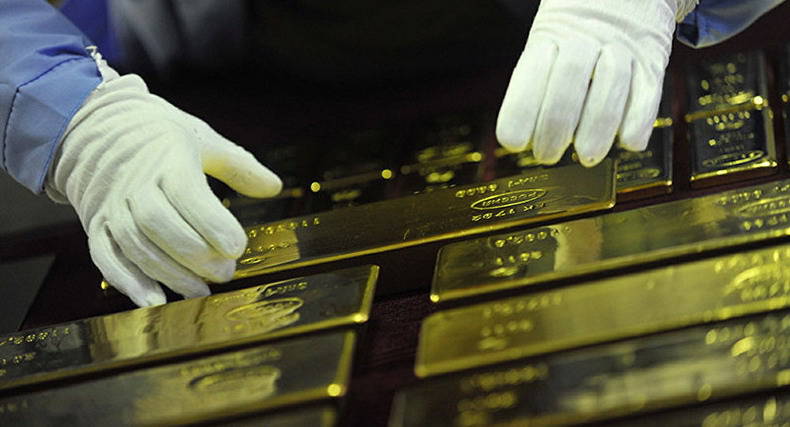 Frederick William Engdahl, an American economist, freelance journalist, writer and political scientist, author of several well-known books and studies, reflects on the subject of gold. His article is published by the portal. Mixednews.ru.

The analyst recalls that during the financial crisis of 1930, central banks and citizens preferred to keep their savings in gold, as paper money depreciated. According to Engdal, the world is moving today "to the next such stage": after all, the debts of the dollar system reduce the real value of paper dollars. And it is already noticeable, as central banks are buying up all the gold “that they can manage”.

Later, President Nixon, at the insistence of the then US Under Secretary of the Treasury Paul Volcker and his patron David Rockefeller, deprived the dollar of the gold collateral established by law. Nixon took this step because the Fed had less and less gold bars: France, Germany and other US trading partners demanded gold in exchange for the dollars they had accumulated, and this was acceptable in accordance with the Bretton Woods rules. Since 1971, the mass of paper dollars in global money circulation has been increasing unrestrainedly. “This was the cause of the era of great inflation, which has been going on in the world economy for more than fifty-five years, because the dollar mass has been growing rapidly and today has reached 2500 percent compared to 1970 year,” writes the economist.

In October, US Secretary of State Henry Kissinger spoke about 1973 about the "petrodollar". In fact, since then, the value of the dollar has been provided not by gold, but by oil. Thanks to Kissinger and the rest, oil prices in 1973 have risen by 400 per cent. These manipulations forced Germany, France, and generally most of the world to buy dollars. Since then, Saudi Arabia and other OPEC countries have begun to demand only US dollars from the Germans, the French and others as payment for black gold.

Since September 2014, world oil prices have begun to fall rapidly. “It was the 70-percent drop in demand in dollar terms for the world's largest commodity denominated in dollars,” explains the analyst.

And it turned out that the central banks of Russia and China are rapidly acquiring gold. Moreover, the People's Bank of China announced that it is refusing to bind the national currency to the US dollar in favor of a basket of currencies headed by the euro.

While everyone's attention was focused on the price of oil, the Central Bank of Russia acquired gold in large quantities. In the difficult year 2015, Russia added 208 tons to gold reserves, which is more than in the 2014 year (172 tons).

And another interesting thing: the Russian Central Bank to buy gold sells US Treasury securities, and this “de facto means dedollarization”.

And another thing: after the announcement by the Chairman of the Central Bank of Russia Elvira Nabiullina in May 2015 that she does not see the need to buy all the domestic gold (after all, the Central Bank’s needs can be met on the international market), a turn was made by 180 degrees, and today the Central Bank buys all gold mined in Russia. Only in cases where this gold is not enough to fulfill the monthly procurement plans, he resorts to imports. Nabiullina herself said that "we consider it necessary from the point of view of creating an additional financial airbag for the state in the face of external uncertainty."

The economist further emphasizes that Russia (a country whose gold reserves "were plundered during the reign of Boris Yeltsin") has now become the second gold mining country in the world after China.

The material notes and a significant increase in gold reserves in Kazakhstan. For the past forty months, this republic has been increasing its gold reserves. At the same time, Kazakhstan is part of the Eurasian Economic Union.

As for China’s Russian partner, in January 2016 purchased 17 tons of gold in January and intends to replenish reserves by the end of the year for 215 tons, that is, approximately in the same volume as Russia. From August 2015 to January 2016, China increased its gold reserves by 101 tons. According to statistics from the People's Bank of China, since 2009, the volume of gold reserves in the country has grown by 57%. Analysts are confident that the amount of gold in the vaults of the People’s Bank of China is "underestimated from a political point of view."

According to the expert, the currencies of Russia, China and some other Eurasian countries tend to become "reliable as gold." By the way, Russia has an extremely low ratio of external debt to GDP: about 18% compared to 103% in the USA, 94% in the eurozone countries, more than 200% in Japan. And this fact is deliberately ignored by Western rating agencies. “Russia has a much healthier economy than most Western countries, trumpeting about its economic collapse,” said Engdal.

The share of gold reserves in gold reserves of Russia starts to play a more significant role than the currency component. This is evidenced by models based on data from the Central Bank of Russia, the portal notes "Financial One".

Buying gold in large volumes, the Central Bank can much more quickly increase reserves to the designated comfortable level of 500 billion dollars, however, under one condition: the precious metal will continue to go up.

Analysts recall what happened at the beginning of this year historical an event for the Russian economy: the country's foreign exchange reserves began to correlate less with the US dollar, while their correlation with the price of gold increased noticeably. This is due to the relevant policy of the Central Bank of the Russian Federation to build up reserves due to gold. As a result, the share of the latter in the gold and foreign currency reserves begins to play a more significant role than the currency component.

The reason for this may be the geopolitical situation. The Central Bank began to intensively purchase precious metals precisely after the Crimean events. The correlation was also strengthened by the rise in gold prices (at the beginning of 2016, it increased in price by 18% compared to December lows of 2015).

According to the World Gold Council, which the portal cites, in July-December 2015, the Bank of Russia bought record-breaking 139,49 tons of gold from domestic producers. The high rate of procurement is maintained for the second year in a row. Being the emission center of the ruble, the Central Bank of the Russian Federation "can painlessly increase its gold reserves by buying it from Russian miners."

Elvira Nabiullina says that the “comfortable” level of gold and foreign currency reserves for Russia is more than 500 billion dollars. Now this figure is at around 383,5 billion dollars. Continuing growth in gold prices will help to achieve the required level faster. And if this goes on like this, analysts say, the well-being of Russians in the long term "will depend not only on oil, but also on the quotations of gold on the world market."

A simple answer to the question of Russia's increasing the gold reserves was given by the financial ombudsman (defender of rights) Pavel Medvedev. “Russia acts primarily in the interests of domestic gold mining companies,” he said. "Komsomolskaya Pravda". - Supports manufacturers afloat, buying them gold. Plus seeks to reduce dependence on foreign currency. First of all, from the American dollar. ”

There are critics of buying gold, notes Russian Business Journal. Opponents are reminded of the relatively low liquidity of this precious metal: after all, the sale involves the need to move a significant cargo. In addition, the speculators will notice the preparation of the deal for the sale of a large batch of gold and will hasten to derail prices. As a result, the transaction will not be so profitable.

The instability of gold prices is also mentioned separately: since 2011, the prices for this metal have decreased by more than a third. True, the long-term trend shows that gold prices have more than quadrupled since the beginning of 2000.

By the way, in anticipation of the devaluation of the dollar, which predict Some Western economists, building gold in gold reserves instead of dollars, also seems like a reasonable decision.

Observed and commented on Oleg Chuvakin
- especially for topwar.ru
Ctrl Enter
Noticed oshЫbku Highlight text and press. Ctrl + Enter
We are
Results of the week. “I will tell you one clever thing! Only you do not be offended! "How the Germans and the Swiss considered their gold
Military Reviewin Yandex News
Military Reviewin Google News
150 comments
Information
Dear reader, to leave comments on the publication, you must sign in.