"Better in coffins than in slaves" 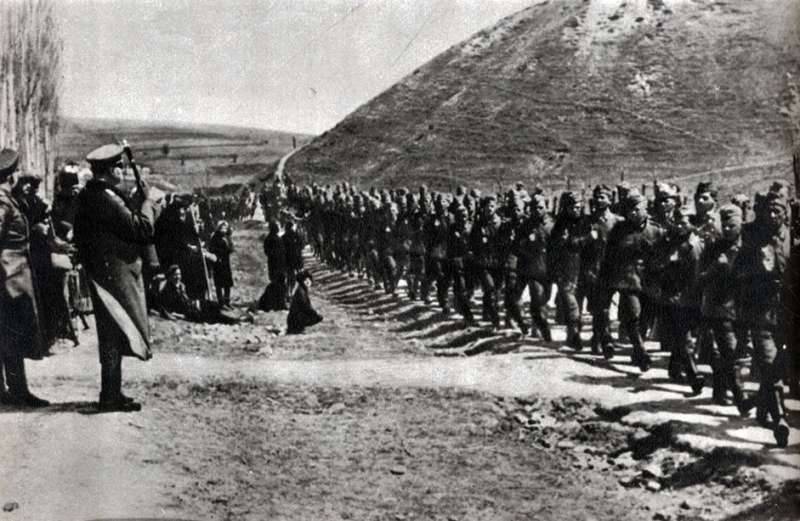 It so happened that lately the Balkan topic has been heard all the time - the 10 anniversary of the death of Slobodan Milosevic, the anniversary of the beginning of the NATO bombing of 1999 of the year, at once two resonant sentences to the Serbs at the Hague Tribunal ... But today I would like to talk about events in Yugoslavia, which occurred at another time, long before the drama of the confrontation of Belgrade and NATO.

6 April marks 75 years since the day the military power of Hitler's fascism fell upon the Kingdom of Yugoslavia. Then, in 1941, the fascist winners dismembered the defeated country. (The “civilized” West has done the same thing in our time!)

One by one, countries fell at the feet of Nazi Germany and its allies. The fascists acted where they were directly captured, where they were organizing coups, and someone was simply inclined to cooperate under the influence of fear. Yugoslavia tried to maintain neutrality. But…

A direct attack on this country was preceded by a “proposal that cannot be refused” - to join the Tripartite Pact, which included Germany, Italy and Japan.

The government headed by Dragisha Cvetkovic was forced to admit that there were no forces to resist, the army was too weak. By definition, this government could not rely on the people - it had previously crushed the leftist forces, canceled the 8-hour working day and other social guarantees for ordinary people. And it took a capitulary position - March 25 signed a fascist agreement on accession to the Tripartite Pact. One of those who actively promoted this decision was the Minister of War Milan Nedich.

This event caused the most popular uprising. Immediately after the announcement of the accession to the fascist coalition on the streets of Belgrade, many people came out. They chanted: “Bless him the Covenant!”, “Bless him a robber coffin!” (“Better to fight than to accept the Covenant”, “Better in coffins than slaves”).

The next day, March 26, the demonstrations spread to other cities of the Kingdom of Yugoslavia - Ljubljana, Kragujevac, Leskovac, Cacak. In the capital, citizens in anger smashed the building of the German information bureau. Nazi flags were burning.

March 27 popular uprising partially won. The protesters were joined by the military, who overthrew Cvetkovic. In his place appointed General Dusan Simovich.

King Yugoslavia Peter II at that time was 17 for years, and the regent Paul, who led a policy of conciliation with the fascists, ruled on his behalf. After a popular uprising and the protesting support of the military, Pavel was removed from power, and the king was proclaimed an adult, and he was able to manage the state himself (although he took advantage of this opportunity for a very short time).

Of course, one cannot talk about the complete victory of the insurgent people - the same monarchical regime, which could not be truly popular, remained in power. It was possible to get rid of only the most odious figures, whose names were associated with the accession to the disgraceful Pact. However, the people took what had happened with great enthusiasm, as is usually the case when it is possible to achieve at least partial success.

Simovich could not and did not want to abruptly break off relations with Germany and defiantly quit the Covenant (for that he needed a fair amount of courage). But he was not eager to fulfill the signed agreement. However, the most important thing is that he began to cooperate with the Soviet Union. April 5 between the USSR and Yugoslavia in Moscow signed an agreement on mutual assistance. There were contacts of the new Yugoslav government with Britain.

However, Hitler was already preparing for a punitive operation against the Yugoslav people who did not stand before his knees. And the next day after the signing of the treaty with the Soviet Union, in the early morning of April 6, direct aggression began. Together with Germany, Italy and Hungary participated in the punitive campaign.

At the same time, an attack on Greece began, since earlier fascist Italy had already attempted to seize this country, but to no avail. Hitler decided to support the Italian ally, launching a general attack on the Balkans.

The invasion was conducted from the territories of Romania, Bulgaria, Austria, Albania. The main enemy of the Nazi forces were declared Serbs, while the Croats, Macedonians and Bosnians were not considered in the Nazi propaganda as opponents. They were inclined to betrayal and, unfortunately, many were able to persuade ... Especially - the top. Croatia declared secession from Yugoslavia, and its nationalists — the Ustashi — became the most faithful allies of the fascists.

Half a century later, beginning in 1991, the main opponents of the forces who were encroaching on Yugoslavia will be the Serbs again, while the rest of the nations will be given lots of sweet promises ... And again, the Bosnians will again be cut Serbian population ... And again the forces will be unequal as in 1941 year ...

The Nazis and their allies moved to Yugoslavia, as well as to Greece, more than 80 divisions, two thousand tanks and about the same number of aircraft. Yugoslavia and Greece did not have tank units, and the aircraft were very outdated, and even those five times less.

The barbaric bombing of Belgrade and other cities began. Fascist airplanes destroyed airfields, bridges, railways, communication centers and other infrastructure facilities (then the NATO will do the same). Yugoslav aviation managed to bring down several aircraft of the aggressor, but was completely defeated.

April 12 fascists approached the Yugoslav capital. Hauptsturmführer SS Fritz Klingenberg set a formidable ultimatum: if Belgrade refuses to surrender, he personally will call the planes in 20 minutes that will erase the city from the face of the earth. (Oh, yes, - solid parallels with what NATO will then undertake!)

Belgrade was surrendered. King Peter II and the members of the new government, formed after the popular uprising, fled, first to Greece, then to Egypt, and after moving to Britain. After the 11 days of the war - April 17 - Yugoslavia signed a complete surrender.

After that, Serbia was headed by the aforementioned Milan Nedich, who was thus rewarded for his active pro-German position. Montenegro was given to Italy, Kosovo - was ceded to Albania, and Croatia, led by Ustash Ante Pavelic, received the territory of Bosnia and Herzegovina. Vojvodina went to Hungary.

So far, only Vojvodina remains in Serbia, and it’s not possible to drive out the Serbs from Bosnia and Herzegovina - 49% of the territory belongs to the Republika Srpska. And for the rest - the country was divided in the same way, practically along the same borders as the fascists. And the small weakened republics continue their sad transformation into semi-colonies. A gangster pseudo-independent state has been created in Kosovo ...

And why be surprised? If you look at the main culprits of the collapse of Yugoslavia in the 90-ies - Aliya Izetbegovic and Franjo Tudjman - for the first listed cooperation with the Nazis in the framework of the organization "Young Muslims", and the second after the war began to actively preach the Croatian nationalist Ustashi ideology.

Returning to 1941 year ... 15 April 1941, the Communist Party of Yugoslavia announced the beginning of an active struggle against fascism. It was the Communists, together with the USSR, who defeated the fascist invaders. By the way, 6 of April is another anniversary associated with that war: in the 1945 year, the city of Sarajevo was liberated that day.

No matter how later relations between the USSR and Yugoslavia developed, the country still lived relatively well for half a century until the new fascists — the United States and NATO — began to tear it again into bloody pieces ...

Was the popular uprising in Yugoslavia against the fascist pact in vain? In no case. For Hitler, this was a complete surprise, angered him. He had to correct his plans for an attack on the USSR (otherwise it could have already taken place on May 15).

However, even if this delay is not considered significant, any delay in the enemy is still beneficial. And yet - the insurgent people retained their honor and demonstrated an unwillingness to join the fascist Pact. This uprising laid the future resistance to the invaders.

And today the Serbs have something to remember. So, March 27, on the day of the 75 anniversary of that anti-fascist uprising, thousands of demonstrations against new fascists took place in Belgrade. Against the neo-fascist bloc of NATO, which Serbs are inclined to cooperate with in the wagging leadership.

Let the memory of those events serve weapons and in the current struggle.