The priority in the creation of unmanned aerial vehicles controlled from the ground belongs to Princess Olga, who lived in the 9th century, who, as weapons against the Drevlians who had come out of obedience, they used pigeons, with whose help, they set fire to the enemy Iskorosten.

The unpatented successes of Russian geniuses, according to the established tradition, have remained in the shadow of the achievements of pragmatic Anglo-Saxons. The first to achieve some success in this direction were the Americans. In 1910, a military engineer from Ohio, Charles Kettering, proposed a flying device controlled by a clockwork mechanism, which in a given place should have dropped wings and a bomb to fall on the enemy. Having received money from the US government, the inventor built several vehicles with varying success, but they did not participate in the hostilities.

In the USSR in the 30s, Nikitin developed a special purpose torpedo bomber-glider (PSN-1 and PSN-2) of the “flying wing” type. By the beginning of 1940, a draft unmanned flying torpedo with a range of over one hundred kilometers was ready. However, the development did not go into action, because then in the air then bomber dominated aviation.

The idea gained a second wind in 1957, when the Tupolev Design Bureau received a state order for a supersonic medium-range cruise missile. The experimental model Tu-121 has not received further application. But the created design came to court when designing reconnaissance drones: Tu-123 Hawk, Tu-143 Reis and Tu-141 Strizh, which were in service with USSR Air Forces from 1964 to 1979. These samples were also supplied to Warsaw Pact friends in African and Middle Eastern countries, including Iraq and Syria. In 70 – 80, the USSR was the world leader in their production; about 950 Tu-143 alone were produced. They, for example, were widely used during the Lebanese War 1982 of the year. A "Swift" is still in service with the Ukrainian Air Force. 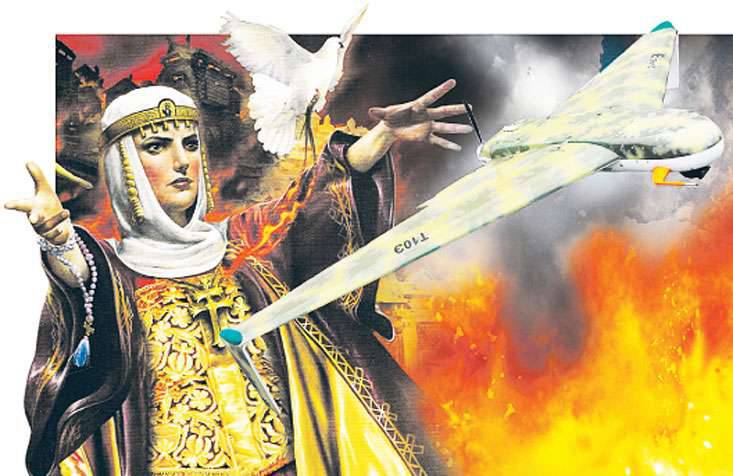 Conflicts in the Middle East contributed to the intensification of work in this direction. Remote-manned (UAV) and autonomous unmanned aerial vehicles (UAVs) were used by both sides of the Gulf War 1991 of the year (“Desert Storm”) primarily as observation and reconnaissance platforms. During this operation, tactical intelligence drones of the coalition made more 530 sorties, having stayed in the air for about 1700 hours. Russian-made UAVs were actively used in KTO in the North Caucasus, and currently serve in Syria.

Major Timur S., an officer of military special forces, admits that RPVs used in his unit do not have the necessary performance characteristics for full reconnaissance of the area, and are skeptical of drones. Although, in his opinion, in some structures such as the GRU or the FSB there are quite appropriate for the tasks assigned drones, as a rule, of foreign manufacture. Their command saves - dear, everyone counts, so they are used only in exceptional cases. Some bosses believe that it is easier to report for a dead soldier who was lost during a search on the ground than for an expensive drone. After all, even if the unit is not knocked down, it can be lost or fall into the hands of the enemy, which is fraught with much more serious consequences for a career. Our special forces, following the saying, “Desire to fiction is cunning,” manages to launch home-made craft into the sky, collected almost on the knee, which in some respects surpass factory samples.

The officer calls the typical flaws of the UAVs: they make a lot of noise than they unmask themselves, they are used more often during the day when they are more likely to be noticed and shot down, their matrix is ​​imported and in the event of a military conflict with the producing country such UAVs are out of order. Hidden enemy, which is hidden, for example, in the reeds or in more often, it is very difficult to detect an aircraft-type drone: there is enough battery for a maximum of one and a half hours. When communication is lost, UAVs, as a rule, lose their orientation and fall, so it is necessary to resolve the issue so that the device can blindly return to the launch point.

For tactical special forces, where the major serves, helicopter-type drones are preferred, but, according to the officer, a miser goes.

How shot down "Eleron"

Captain Ilya M., platoon commander of a special reconnaissance complex, has operated two types of UAVs since 2010: Eleron-3CB - short-range tactical and Eleron-10CB - operational-tactical zone. Both production Kazan JSC "Eneks". Basic TTX samples. “Middle” weighs five kilograms, operates at a distance of up to 25 kilometers, flight time - 90 minutes, working altitude range - from 100 to a thousand meters, ceiling - five thousand meters. Speed ​​- from 70 to 130 kilometers per hour. The average "Aileron" weighing a kilogram of 15,5 takes on board up to 4,5 of a kilogram of payload, works up to 60 kilometers away. Able to be airborne for about an hour.

Flight altitude for the Aileron-10CB is not critical, since 1000 – 1500 meters are most suitable for conducting reconnaissance. The same is true with the flight range: if the UAV manages to get too far away, problems with data transmission will begin, especially via video channel. The tactical "Aileron" can be sent for 100 kilometers, but in this case it will not transmit the "picture". Excessive, it seems, the weight of this model gives an advantage in the case of bumpiness in the air. But there are restrictions on the take-off. For example, if the wind speed exceeds 15 meters per second, it is forbidden to start - tipping is possible.

In March, 2012, in the area of ​​the Daghestani village of Gubden, with the help of the Aileron, was found and eliminated a gang of 18 people who had long been successfully hiding in a difficult mountainous region. The result paid off all the material and moral costs invested in an air reconnaissance aircraft. The equipment installed on these UAVs, allows not only to find, but also to identify objects and objects.

In the opinion of Ilya, the advantages of aircraft-type vehicles can also be attributed to the fact that not only visual reconnaissance is carried out with their help, but also reconnaissance, panoramic shooting of plans for correcting maps, communication is maintained (or, if necessary, its suppression). The noise from the drone, according to the officer, does not exceed the general background and at the working height does not attract attention.

Meanwhile, in the unit operating in Syria, one of these devices was shot down. Bullet-fool landed in the battery. All hits to other parts of the drone - the console, tail, do not affect the flight due to the given stabilization design. By the way, a rocket can not bring down such a UAV because of too low values ​​of the parameters for which the homing is performed.

First of all - helicopters

Helicopter-type vehicles are multifunctional complexes of aerial reconnaissance of the terrain and objects based on a UAV of vertical take-off and landing, they are also copters, in Ilya’s division they were used only as experimental ones, but they proved to be good. It is about "Nelk-V6", made in Moscow. The weight of the device, depending on the modification, can reach 3,5 kilograms. The target load is up to two kilograms. Such devices are best suited for units that perform tactical combat missions, reconnaissance, search and rescue activities: when you need to see some details, open the disguise.

The advantages can be easily attributed to the absence of special devices for launching, hence the reduced time to prepare for the flight - up to seven minutes (two to three times less than that of an aircraft type UAV), a large payload - up to 20 kilograms and more, except for ordinary telephones and cameras, as well as a thermal imager, a laser scanner, “jammers” and other special equipment, which allows you to more clearly visualize the necessary part of the terrain or solve specific problems.

The officer attributed the vulnerability of “Nelka” to vulnerability (to put the device out of operation, one precise shot is enough), the high cost of the sample (about two million rubles), and a short flight time (less than an hour).

The captain, through his example, spoke about the contact that exists between the UAV designers and their users in the military. As for the "Aileron", then he is familiar to the person who is engaged in their development. On occasion, they call each other and the designer advises, that is, there is a connection to which developers, manufacturers and operators should ideally strive for. Alas, this approach is rather atypical. And if Kazan are ready for such contacts and help the military to troubleshoot, others more often keep their distance, guided by the principle: sold and forgotten.

Ctrl Enter
Noticed oshЫbku Highlight text and press. Ctrl + Enter
We are
Mirror for "Heroes of the nation" "Freedom to the Drevlyans!" - our answer to Kiev ?!UAVs in green caps. Worldwide experience in the use of UAVs in the protection of state borders
Military Reviewin Yandex News
Military Reviewin Google News
32 comments
Information
Dear reader, to leave comments on the publication, you must sign in.