March 30 in Roscosmos held a meeting of the Director General of the state corporation Igor Komarov with the media. The main provisions of the Federal Space Program approved by the government for 2016 – 2025 were presented, the results of work in the first quarter were summed up, and the interaction with the enterprises of the Russian space radio and gas complex was discussed.

The report of Igor Komarov and the figures named in it testify: the department made the necessary conclusions from the series of unsuccessful launches of PH in 2010 – 2015. Recall that about eight launch vehicles suffered accidents at launch, did not bring the satellites into specified orbits, were noted by equipment failures on board. What is worth only the loss of "Proton-M" with a Mexican communications satellite in May 2015, which was watched live by millions of taxpayers.

From 30 January to 19 in March, 2016-th from Baikonur and Plesetsk successfully launched six launch vehicles that launched various satellites into orbit. The government has approved the Federal Space Program (FKP) before 2025. February 15 specialists of FSUE “TsENKI” and other enterprises of the Roskosmos Group of Companies completed the installation of equipment on all systems of the Soyuz-2 launch complex of the Vostochny cosmodrome. This ended with a successful dry removal of the PH, all systems worked well. The third ground station of the GLONASS system was commissioned at Pernambuco State Institute of Technology (Recife, Brazil). There are other successes. 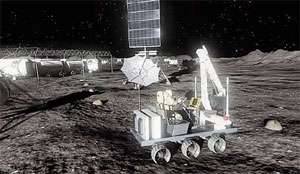 But at the meeting, the feeling that Russia was still slipping into third-rate positions from the leading space powers did not let go. For example, it was proud to announce the successful launch of the Resurs-P remote sensing satellite with an optical system resolution of less than one meter. Earth remote sensing has long been needed by the country and, undoubtedly, will have a national economic effect. But the American counterpart works in orbit for at least 25 years, and gives permission up to 20 centimeters. According to experts, overseas optics had already been reading numbers on the sides of our trucks a quarter of a century ago. And we approached this only now.

The landing on the moon is postponed until 2030. About this mission, Igor Komarov spoke sparingly. Until the end it is not clear that it will still be. First, 2030 is a very distant time, another generation. Who is responsible for the final result of the program? Only in 2021, with the advent of the Phoenix spacecraft, will the development, as Komarov said, of the infrastructure of the moon flight. Secondly, why do we need such a mission at all? To master the budget, set the flag of the Russian Federation and return to Earth? Or in order to lay the first settlement there? Americans have long been on the moon. If you already land on it, then with more significant tasks.

Missions to Earth’s satellite will be carried out by automatic vehicles, Komarov noted. But this has already been done in the era of the USSR with the help of moon rovers. Again, the repetition of the traversed?

Igor Komarov talked a lot about tasteful interaction with the Americans. And about continuing to work with them on the ISS, and about the implementation of commercial launches ... "In space, everything is different. Not like on Earth. "

The impression was made that Roscosmos lives in another dimension. For him, the relationship with the United States is peace, friendship, chewing gum. For Russia - sanctions, blacklists, provocations, espionage, humiliation in the State Department, deployment around the borders of the missile defense system. What I mean is that in 1991 we already once believed American “partners” and advisers. What this led to is well known. Overseas, we were removed from the lists of great countries. But the results of the military work of the Russian Aerospace Forces in Syria showed that it was too early to write off Russia.

However, at any moment we may be tried, as they say, to doge. So, we must think not only about the commercial, but also about the defense value of space. However, the creation of a super-heavy LV in the department of Komarov is out of the question. The United States will create its super heavy SLS by 2018, it will raise 70 – 130 tons. What does this mean in defense terms, knowledgeable people do not need to tell.

Answering the question of “Military Industrial Courier”, why we are not engaged in super-heavy RN, Komarov said: “For 10 – 15, she will not have a commercial burden for years,” so they don’t need it.

The Tu-160 also has no commercial burden, but the state decided not only to reincarnate the aircraft, but also to deeply modernize it. First of all, because it solves the problem of nuclear deterrence.

When it comes to the survival of Russia in a world that is teetering on the brink of war, commercial interests should be relegated to the background. However, Igor Komarov is full of optimism: “Unlike Earth, the reverse process is underway in space. We see the future in cooperation with the USA. ”

You can only enjoy such a cheerful mood of the head of the state corporation. I would like to believe with him in the cloudless future. Yes, time is not the court.