The first phase of the Russian operation in Syria, the beginning of which should be considered 30 September 2015, and the end 14 March 2016, in addition to the many positive moments for the Armed Forces of the Russian Federation - a fundamental change in the situation on the front lines in the SAR, testing the latest weapons systems, purchasing invaluable combat experience - and revealed problems. The most obvious of these is the organization of logistics support for both our air group and the Syrian government army. It was carried out by air bridge and sea.

Little is known about the first. According to the Ministry of Defense of the Russian Federation, during the first phase of the operation, military transport aviation performed a total of about 640 sorties. Loaded at the Chkalovsky airfield near Moscow and the airbase in Mozdok. The route passed over the waters of the Caspian Sea, the territory of Iran and Iraq with the final destination "Hmeimim" in the Syrian province of Latakia.

Information about the sea route more. Russian ships and support ships that participated in the operation, which received the name “Syrian Express” in the Western press, were on their way from Novorossiysk or Sevastopol to Tartus, where the Russian Navy’s material and technical supply point is located, following the Black Sea straits under the watchful eyes of the Turkish media, printed and electronic.

From publications it can be argued that the “express” started about a year after the onset of the internal Syrian confrontation. His organization was the result of the decision of the military-political leadership of Russia to do everything possible to prevent a repetition of the Libyan tragedy, the main events of which were played out in 2011. Then the absence of a similar decision or a delay in its adoption eventually led to the death of Jamahiriya leader Muammar Gaddafi. Libya plunged into chaos, to get out of which can not yet.

Initially, in the absence of vessels destroyed in the previous two decades, the auxiliary fleet The Russian Navy's role as workhorses in the Syrian Express was assigned to the large landing ships (BDK) of the three fleets - the Black Sea, Baltic and Northern. They began to ply between Tartus and mainly Novorossiysk, delivering ammunition for the Syrian army, which fought fierce battles with the Islamic State, which was banned in Russia, affiliated with Al-Qaida, the Jabhat al-Nusra group, other jihadi organizations opposition wing.

Shipments of weapons and military equipment, either purchased through military-technical cooperation, or transferred to the Syrian government, were carried out by sea: it is clear that Assad has few funds to pay for such imports.

We can safely say that Damascus, whose armed forces split along religious lines (the most capable were the formations and units whose recruitment came mainly from the Alawites), stood against the jihadist international largely due to ammunition and weapons and military equipment from Russia.

The initial legend and cover for the Syrian Express operation provided a permanent operational connection of the Russian Navy in the Mediterranean, deployed there at the beginning of 2013. It consisted of one or two or even more ships of the first rank, one reconnaissance, several BDK, support ships. 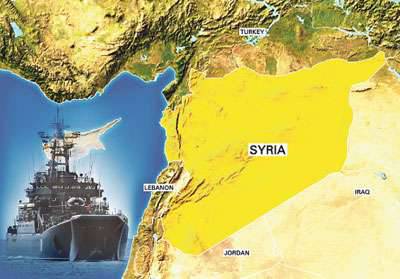 In the "Syrian Express" should be divided into three stages. At the first (from about December 2012 to the end of 2014), the BDK was given the task of providing the Syrian army and its allies with everything necessary. 30 – 45 exits to the Mediterranean Sea in Tartus every year.

The 2014, which preceded the entry of the Russian air group into Syria, was illustrative. According to the available records, during the year 10 BDK from three Russian fleets completed at least 45 movements along the Novorossiysk-Tartus route. Kaliningrad (BF) - at least 10 flights, Novocherkassk (BSF) - 9, and Yamal (BSF) - 8 became some kind of champions. The number of exits of one or another BDK to the route Novorossiysk - Tartus - Novorossiysk, apparently, was determined primarily by the state of their nodes and mechanisms.

The second stage of the "express" began somewhere in August of the 2015, immediately after the adoption of a fundamental decision on the introduction of the Russian air group into Syria. The task was to provide it and the attached units with everything necessary, taking into account further combat use. About the approximate time of the beginning of the stage says statistics. If from January 1 to September 1 2015 of the 9, the BDK of three Russian fleets carried out 38 trips to the Mediterranean Sea, over the next four months - at least 42. The intensity has more than doubled. In addition, in September-December last year, at least four vessels of the auxiliary fleet of the Russian Navy connected to the Syrian Express in connection with the increased traffic volumes. Newbies attracted attention.

To the large sea dry cargo transport (BMST) Yauza of the 550 project, there were no special questions - it had previously been part of the auxiliary fleet of the Northern Fleet. But its sending to the Mediterranean caused bewilderment: what, there is nothing more? Indeed, prior to the “Syrian Express”, the BMST solved the most important task of providing all the necessary nuclear test sites on Novaya Zemlya.

The old woman "Yauza" (1974, built) after overhaul and return to service at the beginning of the 2015-th did not let us down. In September - December, she made at least four flights to Tartus.

But a lot of questions arose in connection with other newcomers to the Syrian Express. At the end of 2015, these were the vessels of the auxiliary fleet of the Russian Navy "Vologda-50", "Dvinitsa-50" and "Kyzyl-60".

Interfax-AVN news agency introduced a certain clarity in connection with their sudden appearance under the flag of the Russian Navy. October 15 2015, it reported that due to the increase in the intensity of military traffic from Russia to Syria in the auxiliary fleet mobilized to 10 civilian dry cargo, including several ships, previously sailed under foreign flags.

Already in 2016, the new participants of the “express” named above added “Alexander Tkachenko” and “Kazan-60”. The concept of “mobilization” fits completely with the first of them - previously it was a ferry on the Crimean ferry. For the rest of the ships, having in the title of the figures "50" or "60", not very.

According to one version, all of them previously belonged to Turkish shipowners and were acquired by the Russian Navy on an emergency basis even before the incident with the destruction of the Russian Su-24 bomber. It is clear that they were not bought from a good life - it was necessary to ensure the combat work of the Russian air group in the absence of ships of this class in the auxiliary fleet.

For its part, the Ministry of Defense of the Russian Federation decided to clarify below its dignity history the appearance on Vologda, Dvinitsa and Kyzyl of Russian flags. Questions remained unanswered: under what conditions were transactions concluded with the Turkish side, in what condition were the courts accepted?

As one of the sailors noted in social networks, each way out to the sea, taking into account the deplorable technical condition, is a game of Russian roulette, especially considering their cargo.

It can be considered that the second stage of the “Syrian Express” ended on March 14, when the decision was made to reduce the Russian air group in Syria. By that day, at least an 24 flight was performed during the operation from the beginning of the year. 17 of them falls on the BDK, the rest - on beginners.

According to the Ministry of Defense of the Russian Federation, from 30 of September 2015 of the year to 14 of March of 2016, 80 of flights for cargo delivery by sea to Tartus was made. This roughly corresponds to the unofficial data given in this article.

Since March 14, the third stage of the Syrian Express began to run, during which the tasks of providing a roughly half of the Russian air group, as well as combat operations of the Syrian army, will have to be solved. Nevertheless, it is already possible to sum up some intermediate results of the operation and make separate predictions.

Firstly, the Russian Navy in the near future risks being left without a BDK, which took over the transportation of most of the military cargo to Syria. They have largely developed their lifespan and need urgent repairs.

Secondly, it can be expected that in the near future vessels of the auxiliary fleet of the Navy in connection with the described situation will take on all large volumes of traffic, freeing BDK from these functions.

Thirdly, it seems that, to put it mildly, in a critical situation as regards the presence of dry cargo ships in the auxiliary fleet of the Russian Navy, it would be logical to assume that the main command would attend to their acquisition, and not from Turkish sources. And here is the most amazing thing: there it was not there! As explained to the “Military-Industrial Courier” in the United Shipbuilding Corporation, so far no requests have been received from the Navy Commander-in-Chief in connection with possible orders for the construction of new transports ... And if tomorrow is a war?

Ctrl Enter
Noticed oshЫbku Highlight text and press. Ctrl + Enter
We are
And a little more about aircraft carriers"Syrian Express" and its ships and vessels
Military Reviewin Yandex News
Military Reviewin Google News
54 comments
Information
Dear reader, to leave comments on the publication, you must sign in.