Not very high reliability early firearms weaponsdue to the long process of loading, dependence on weather conditions and a number of other factors sometimes put its owner in a difficult position. During the battle, it was often the seconds that decided the outcome of the fight, and a damp powder on a powder shelf, a dead wick, or flint sprouting out of the jaws of a hammer could lead to the death of a warrior. For this reason, gunsmiths until the beginning of the 19 century tried to combine firearms with cold arms, creating a combined weapon.

One of the varieties of the combined weapon is a pistol - ax. HistoryPistols.ru has already talked about the Indian battle ax - stylet - wick gun of the middle of the 18 century, as well as about the boarding ax with a flintlock pistol. This article will discuss another combat ax with a shooting mechanism, made on the basis of a spark wheel lock.

The weapon consists of a handle with a barrel fixed on it, a wheel lock with a trigger, and an ax. Barrel cylindrical shape. The first third of the trunk, starting from the breech, has longitudinal grooves and a maximum diameter. In the middle of the barrel stepped with a gradual decrease in diameter. Barrel length 235 mm, barrel bore 0,52 caliber. The battle ax - wheel pistol has a total length of 635 mm. 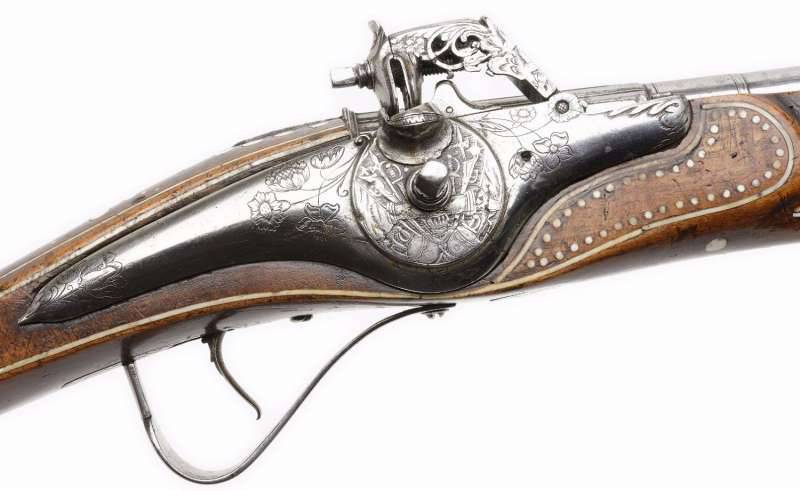 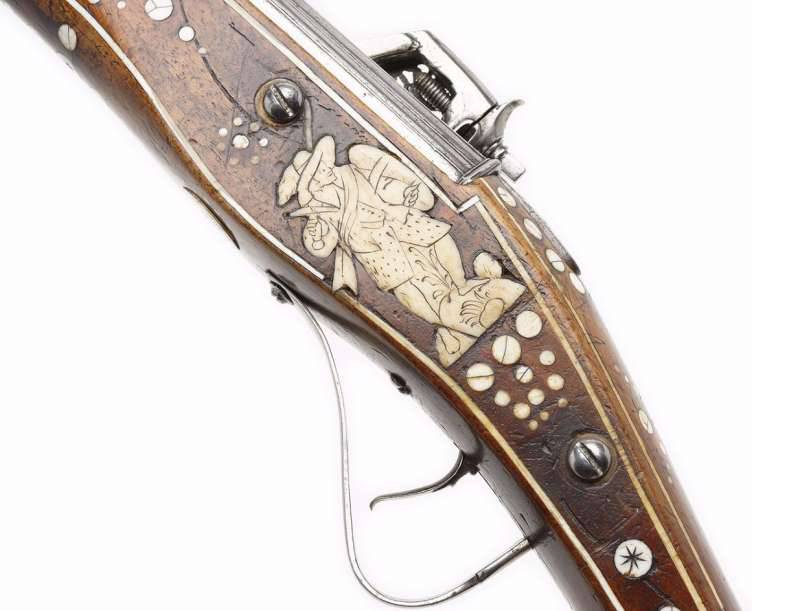 The lock is fixed in the box with the help of two screws with semicircular heads, without using a lock mask. A bone plate, depicting a warrior in a hat with a shield and a sword on his right shoulder, is embedded between the fastening screws in the wood. The trigger guard is steel, has a configuration like that of ordinary wheel guns. Rear rack bracket screwed into the box. The front desk is attached to the box with a screw. The trigger is steel, thin and slightly curved. The trigger mask is made of bone. 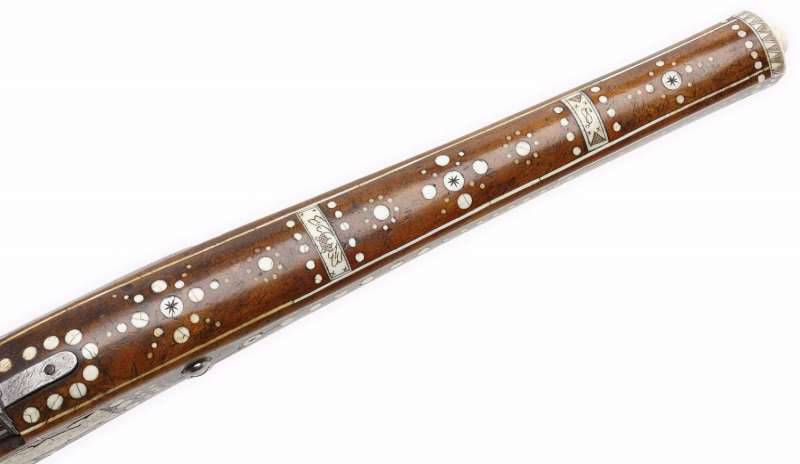 The breech screw has a short shank with a rounded tip. The shank is attached to the box with a screw, screwed from the side of the trigger mask. The bed is decorated with numerous inlays of bone plates, most of which have a rounded shape. 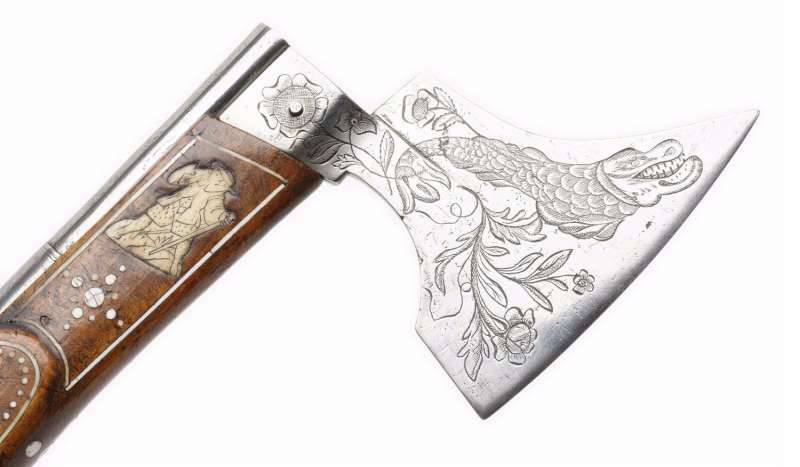 The ax is mounted on the handle and secured with an ax to the trunk. The locking pin is visible on the right side. The front of the butt is shortened to the muzzle. The ax has the overall dimensions 140 × 102 mm. The top edge of the chopping part is pointed, the rear edge is beveled at an angle of 90 degrees to the blade surface. 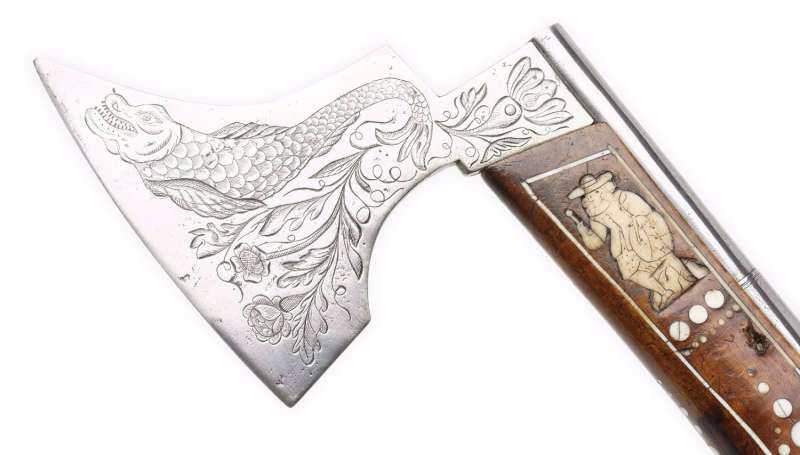 On the left and right sides, an engraving in the form of a vegetative ornament and an image of a mythical fish with a crocodile head is applied on the surface of the ax. The handle in the upper part at the place of attachment of the ax is decorated with inlaid figures of warriors: on the left side of the drummer, on the right side of the musketeer. 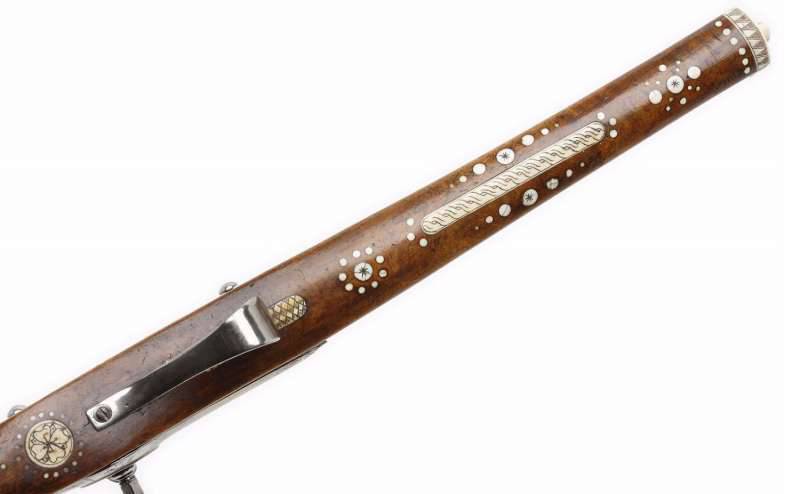 On the lower side of the handle inlay is a round and rectangular bone inserts with surface engraving. The tip of the handle is decorated with carved bone plate with a spherical cap. 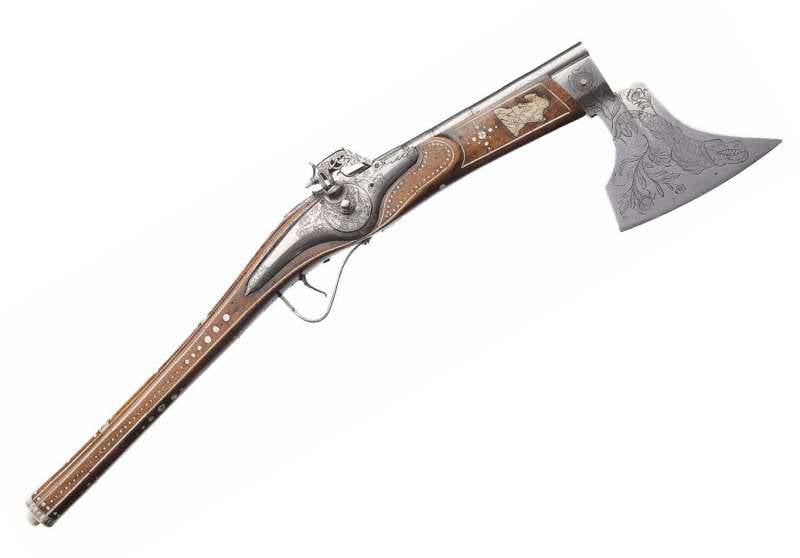 Despite the fact that the weapon was made approximately in the middle of the 17 century, it is perfectly preserved. The metal parts have almost no signs of corrosion, inlays and wood are intact. The uniqueness and originality of the ax pistol in combination with the excellent condition of all mechanisms of weapons give it a high collectible value. The new owner purchased this item in 2015 year at one of the auctions for just 14 950 dollars.