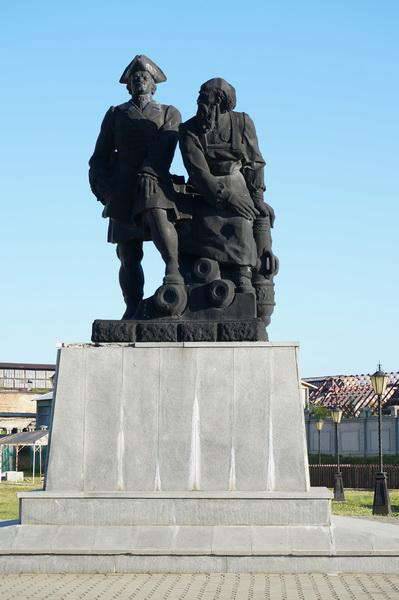 360 years ago, on April 5, 1656, a Russian industrialist and founder of the famous dynasty Nikita Demidov (real name Nikita Demidovich Antufiev) was born in Tula. Being a successful industrialist and entrepreneur, as well as a talented organizer, Nikita Demidov became a major supplier of the Russian army and fleet during the northern war. By 1720, the Demidov Urals produced two-thirds of the metal of the Russian state. Russia received the Ural industrial region and became an exporter from a metal importer.


The founder of the famous family of Russian industrialists Nikita Demidov was from the family of a peasant Demidov G. Antufev. Demid descended from state peasants and came to Tula from the village of Pavshino, which was famous for its iron industry in order to engage in blacksmithing in the city. Demid died in 1664, when his son was eight years old.

The earliest news of Antufev-Demidov dates back to 1686. According to the testimony of the historian V. Klyuchevsky, for the amusing war games of Tsarevich Peter, the Tula guns of the master Demidov were brought to the village of Preobrazhenskoye. In 1691, Demidov came to Moscow to Armory Chamber together with representatives of the Tula Arms Settlement to resolve trade disputes. In the same year, the documents mention "Nikishka Demidov." Tula blacksmiths had strict instructions on the production of gun trunks - up to 2 thousand per year. In addition, they had to deliver trunks, locks and finished guns to the Armory, as many as they wanted and could. Most of all such supplies were made by Demidov. He had a small factory, which he built with his own money, without state money, and used wage laborers.

Thus, already in 1680-1690. Nikita Demidov very successfully traded iron and became the owner of the ironworks, which then made his position completely exceptional, since the other few factories of that time belonged to foreigners and representatives of the nobility.

However, the rise of Demidov as a figure of all-Russian significance begins with acquaintance with Tsar Peter. There are several legends about this meeting. According to one of them, Demidov became known to the tsar by repairing his companion, Baron Shafirov, his German pistol, and even made an exact copy of it. According to another version, the Russian blacksmith was the only one of the Tula gunsmiths who, in 1696, undertook to fulfill the order of the tsar for the manufacture of rifles according to the Western model. During his passage through Tula, the Russian tsar wished to obtain several halberds of a foreign standard and called on local blacksmiths-gunsmiths. Demidov promised to make weapons of an even better standard. He fulfilled his promise. The blacksmith brought to Voronezh an 300 halberd, with which the tsar was pleased and generously awarded the master. Then Peter ordered Demidov's foreign-made guns.

Peter made Demidov a weapon supplier for the army during the Northern War. The guns supplied by Nikita Demidov were much cheaper than foreign ones and of the same quality as them: the Russian industrialist took no more than 1 rubles for his guns. 80 cop, while the treasury bought them for 12-15 rub. In addition, Demidov donated a significant number of cores to the army. Since all weapons were of excellent quality, the king ordered Nikita to become a weapon supplier throughout the war with the Swedes.

Thus, Demidov gained confidence in the king. Nikita became the closest and most active associate of the tsar in the reorganization of the Russian state.

In the 1701 year, the king ordered to disassociate the Strelets lands near Tula in his property, and to mine him, give him a plot in Shcheglovskaya notch. He also issued a special certificate to Demidov, which allowed him to expand production by buying a new land and serfs to work in the factories.

Sweden before the war was the largest supplier of iron and weapons to Russia. However, when the Northern War began, deliveries were stopped. Moscow urgently began to look for internal possibilities for import substitution. Large deposits of iron ore were discovered in the Urals, which became the raw material base for the first iron works: Kamensky, Nevyansky, Uktussky, Alapaevsky. And Demidov was attracted as an expert on ores. According to an extensive program for the development of metallurgy and the military industry, the Nevyansk Iron Works was handed over to Nikita Demidov. When Demidov accepted the plant, only 27 people worked on it. With this, the creation of a huge Ural industrial region began.

In a very short time, Nikita turned the Nevyansky plant into a metallurgical enterprise with high productivity, but did not stop there, and together with his adult son Akinfiy built several more plants: the Shuraly and Bingovsky (1716-1718) hammer mills, Nizhnelaysky (1720) and Nizhny Tagil plants. These enterprises accounted for the glory of the Russian metallurgy and for a long time remained the best and most famous not only in Russia but also in Europe. By the end of the reign of Peter I, the domestic market received enough metal, and Russia began to export iron, year by year more and more.

True, at first it was going hard. The Siberian order conducted unhurried correspondence with the entrepreneur about the quantity and quality of products, about the expansion of the plant. Due to the shortage of coal, the blast furnace stopped. However, Peter ordered to immediately proceed to the case and cast the gun much earlier than scheduled. Demidov was ordered to immediately go to the Urals, threatening to disgrace, punishment and "the ruin of burns without mercy." In the spring of 1702, the first batch of Tula workers and the eldest son of the businessman Akinfiy come to the Urals. In late August, Nikita himself arrived. In January, the 1703 of the Nevyansk Plant shipped the first batch of its products. During the winter 50 large-caliber guns and a lot of iron were produced.

However, new difficulties had to be overcome. In the summer, the water broke through the dam, and the work got up. By the autumn the dam was repaired, but it burst a second time. In addition, Demidov had a conflict with the Verkhotursk voevoda, who took masters from him for the construction of the Alapaevsky plant and took away a lot of iron. Offended Demidov, taking the family and part of the artisans, went to Moscow. Here he demanded more independence and privileges or to take his factory to the treasury. By decree from 4 on April 1704, Demidov received new benefits and privileges.

In February, Akinfiy went to the Urals with a party of artisans to build a dam and new molotovs. He became the actual head of the Nevyansk plant. Although Demidov with his family - his wife, two other sons (Gregory and Nikita), grandchildren, also moved to the Urals. Plant repaired and expanded. Put another blast furnace. Began to increase production. In 1705-1709 Demidov annually supplied 20-25 thousand tons of iron, shells and guns.

Peter initially looked at Demidov as a tenant and he was everywhere referred to as a "persuader." The entrepreneur even received a royal salary - 1 thousand rubles. By Decree 1709, Mr. Demidov was granted the rank of “commissioner”, that is, a government plenipotentiary for the supervision of metallurgical plants, which confirmed and expanded the powers of the industrialist. It went uphill gradually, there were too many difficulties. Time was needed for the exploration of deposits of ores, the accumulation of capital for the expansion of production, and so on. Moreover, the treasury did not always pay for the goods delivered on time. Therefore, during the first decade, the Demidovs could not build new plants in the Urals. And only in the second decade, when the Nevyansk plant became the largest metallurgical enterprise, the Demidovs built new plants. At first, two hammer hammers were built - the Shurale plant and the larger Byngovsky. With their start-up, the capacity of the conversion workshops significantly exceeded the capabilities of the iron production. As a result, the Verkhnetagilsky plant was built and the construction of Nizhny Tagil was started (it was launched after the death of Nikita Demidov). Also built a molotovy Nizhnelaysky plant and the copper smelting Vyisky plant. It was the first copper smelter in the Urals.

Iron from the Demidov plants was supplied not only for the army, but also for the household and household needs of the population. Having provided the domestic market with a sufficient amount of Russia, Russia began exporting iron from 1716 onwards. Since 1718, Demidov has become the sole supplier of iron, anchors and guns for the Russian fleet, as a result of which he gained an influential patron in the person of the head of the Admiralty Fedor Apraksin. Another patron of Demidov was Menshikov.

The quality of Demidov’s products was so high that the sovereign ordered only Demidov’s iron to be taken for the needs of the fleet, and “the Admiralty was not allowed to accept iron from other factories ...”. During the construction of the new capital, Nikita Demidov put 81 300 pounds of iron and iron fountain pipes for the Summer Garden and Peterhof.

Peter himself treated Demidov with great respect. “Well,” said Count Apraksin to Peter, “if you had two dozen people like Demidov. “I would have been happy,” answered Peter, “if I had had several such great people.” Russian sovereign so appreciated the merits of Nikita Demidov, that he wanted to put a copper monument in Petersburg in memory of his posterity. However, he did not have time, he died. The king managed to build Demidov hereditary nobles.

In this case, do not idealize Demidov. They were a strong and difficult person. He knew a lot and knew how, he was businesslike and stern. In his personal life, he was distinguished by simplicity, practically asceticism. He lived in a simple hut, did not take drunk in the mouth, could not bear drunk. He himself was a blacksmith of the highest category. The strict owner, who meticulously delved into all the details of the factory affairs, worked tirelessly and demanded the same from the others. Notable for phenomenal memory. He tried to strengthen his influence among the high dignitaries of the state, trying to maintain his monopoly. In need of working hands, Demidov, contrary to the strict prohibitions of the Berg-Collegium, lured to his masters from state-owned factories, invited Swedish prisoners who knew the iron-casting business, sheltered the fugitives.

Nikita Demidov died on November 28 1725 of the year in Tula.