The project of world domination, which did not take off. For the NATO 67 anniversary

April 5 2016
34
Russia is the main threat to the world. 15 of thousands of American soldiers will be transferred to its borders in the coming year. Poland must increase defense spending. Britain calls to fight Russia. It is necessary to restrain Russian aggression. The 2016 is a year off, Europe is being actively blown up by organizations from the countries conquered by the West - and their military-political alliance stubbornly sets as its main goal the opposition of our weak, torn country. Today, when we celebrate the creation of the NATO bloc, it’s worth talking how he got to his present life. 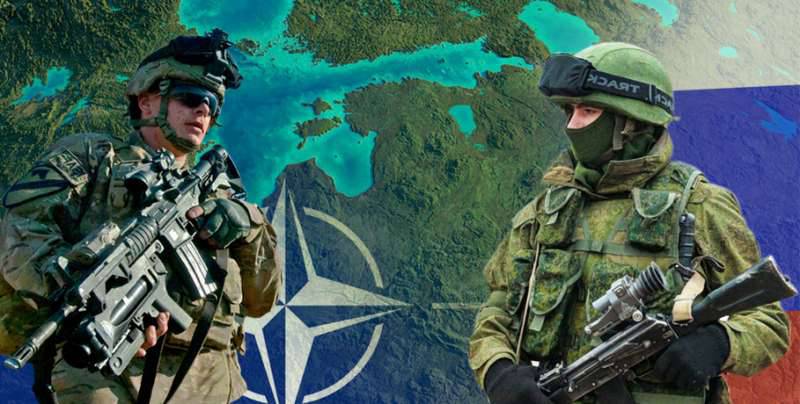 In the spring of 1945, the Second World War ended in Europe. The victorious powers preoccupied themselves with the prevention of such outrages in the future, creating the UN, a collective security system and a means of preserving the post-war world order.

However, almost simultaneously, the creation of another structure started. Having set the same goal (collective security), she initially set out to achieve it by opposing methods - namely, by revising the post-war world order.

Ideologically justified the creation of this alliance of W. Churchill in the Fulton speech (March 5 1946 g). However, it is much more important that, besides those usually commemorated in connection with this speech by the “shadow of Bolshevism” and the “iron curtain”, it contained quite practical instructions:
- The United States and Great Britain should establish a joint use of military and naval bases scattered throughout the British community;
- The alliance should be based on joint air forces capable, if necessary, of bombing any adversary on the planet into the Stone Age for the sake of peace on Earth. Churchill emphasized that he had dreamed of this since the 1920-s;
- the mobility of such air forces should again be based on a system of bases throughout the world, as well as on the widespread use of aircraft carriers;
- the nuclear club should be the main club of this community. weapon

About the UN in a speech specifically stated - as an organization, staying in infancy. And further: "Not a single person in any country began to sleep worse because the information, means and raw materials for creating this (atomic - IZ) bombs are now concentrated mainly in American hands."

Here the British politician, of course, pulled. By the time this speech was made, the Allies had time to develop several plans for the pacification of the USSR using nuclear bombs. It was also supposed to destroy the grouping of Soviet troops in Europe by nuclear bombing. Quiet sleep is not promoted.

Today, it is considered that the UN is coping with peacekeeping tasks more successfully than its predecessor (League of Nations), because the latter managed to postpone another war for only 20 years, whereas since the end of World War II it has already passed around 70. However, it seems that if it were not for the success of the Soviet nuclear project, by the beginning of 50's, the “infant” organization would simply be asked to shut up and not intervene while the older organization establishes peace in the whole world.

Of course, in the USSR they realized this. And even (realizing all the hopelessness of the attempts) offered the holders of a controlling interest in NATO to accept the Soviet Union into the organization. 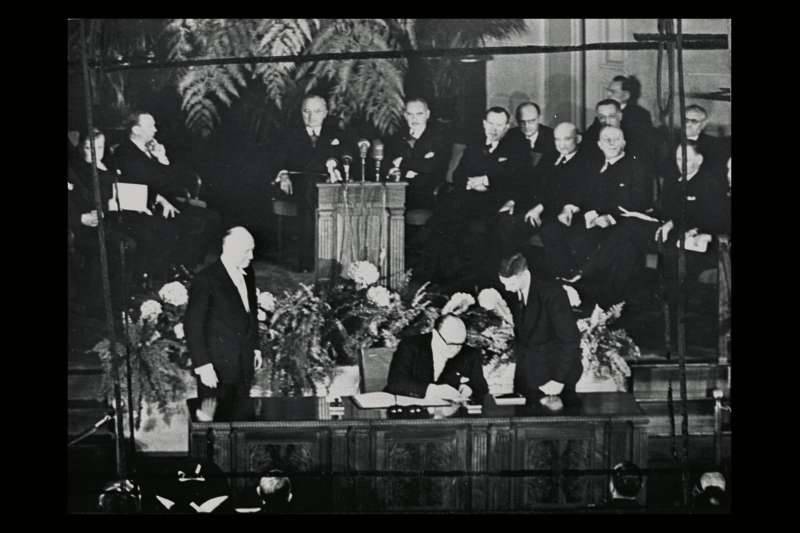 At the beginning of 1954, a conference of the foreign ministers of the USSR, the USA, France and the UK was held in Berlin. It once again sounded the thesis that NATO is a defensive organization that is not directed against the USSR. Perhaps it was she who actualized Stalin's joke two years ago on the same occasion: “... shouldn't the USSR then join [NATO] in this case?”.

During March, A. Gromyko (at that time - First Deputy Foreign Minister) was preparing a note that was handed over to 31 in March 1954 by the NATO leadership: the USSR raises the question of its membership in the organization. And also about concluding a treaty on collective security in Europe with the participation of the United States, which seems to be fully in line with one of Eisenhower's thesis “A Chance for Peace” (1953 d): “... no country can ensure its own security by remaining in isolation from the rest of the world. " 7 May comes up with a rejection: "The unreal nature of the proposal is not worth discussing."

In fact, the Soviet leadership proposed to return to the architecture of the Vienna system of relations in the updated format. However, it did not take 30 more than 10 years to block the Western powers to abandon this model. Moreover, since the beginning of the presidency of Eisenhower in the United States, at the request of France, the military invasion program in Vietnam was being worked out (A. Dulles, 1953 g: "... you can clear Indochina in eighteen months if you give the French full military assistance").

The consequences of the refusal of the USSR on both initiatives are also well known to us: the turn of the arms race, the confrontation of two military-political blocs (after the refusal of the western bloc to create a common security system of the USSR created its own - the Warsaw Treaty Organization), the Caribbean crisis. After that, as a result, the USSR and the USA still came to the need to sit down at the negotiating table and defuse the international situation. The 10 years after the Caribbean crisis were dedicated to just that. 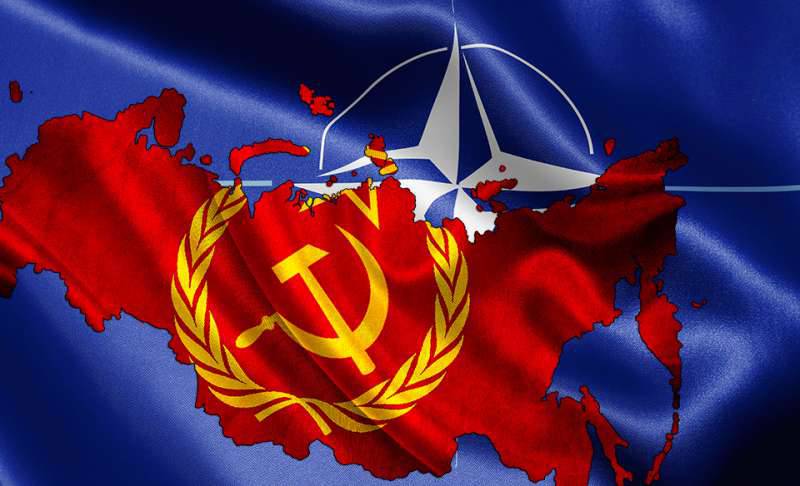 Since then, of course, much has changed. The USSR ceased to exist, the NATO Bloc has more than doubled, expanding not only by the Warsaw Pact countries, but also by the Baltic states. In Europe, there is still no security system with the participation of Russia.

NATO, we recall, was created to counter the growing influence of the USSR in Europe and the world - Churchill addressed this topic several times in Fulton speech. But at least since the end of 1991, this task is irrelevant - as they say in sports, “due to the non-appearance of an opponent”.
Well, let's say, in the new world there are new threats - the same terrorism. However, it was 1990-e that showed that NATO was not originally a project to maintain security, nor a project to contain world communism.
It was a project of world domination.

The nineties were a time when this project in all seriousness considered himself to be complete and successful. It is in the logic of this domination that it becomes clear why the defeat of the main and terrible enemy in the Cold War caused only a sharp increase in the military bloc opposing it. It is this logic that explains why a long hunt for recalcitrant regimes began, often to the point of complete annihilation, after the spread of NATO to the former Eastern Europe. It is precisely this logic that explains precisely after the victory of a bloc organized for security - the security itself in the world has slipped to the level of about the beginning of the 20th century. The winner of the Soviet Union dealt with the remaining goals. 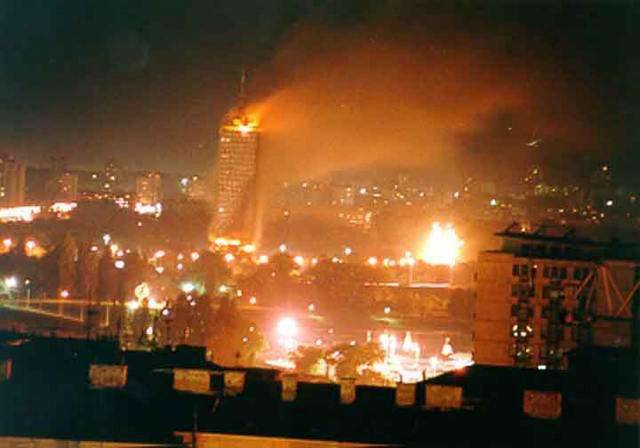 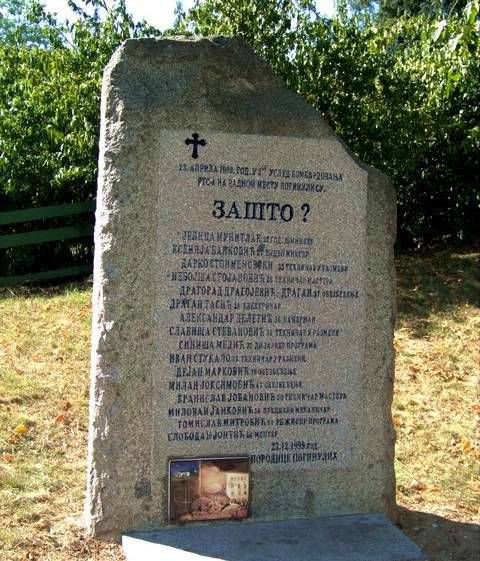 Already zero showed that not everything works in the project of world domination. The idea of ​​simply “replacing bad modes with good ones” turned out to be untenable. It turned out that some states in general can exist only in the form of “bad regimes” —and with other configurations they turn into zones of chaos.

It turned out that keeping control over the conquered territories costs the winners in amounts that offset bonuses even from the captured resources.
It turned out that the created “zones of chaos” on the site of the former recalcitrant countries represent a direct and immediate threat to the metropolises of the “new world order”. That it began to prove itself by planes in New York in 2001 and is now being proved by suicidal attacks on Brussels in 2016. The sharp increase in drug trafficking from liberated Kosovo and Afghanistan 15 years ago - and millions of illegal immigrants to Europe now. 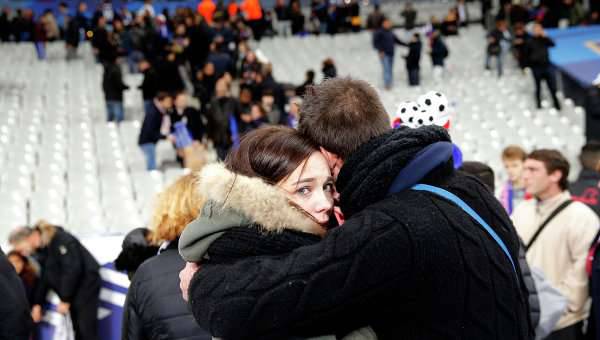 Finally, already in the very last months, it turned out that in the struggle against this real threat, the surviving remnants of that very uninhabited “Yalta” system of the world order are much more effective. That is, non-modern Syrian secular regime and undemocratic uninhabited Russia with its own videoconferencing.
And today we are actually seeing a split of the Western consciousness. Part of the "NATO" elites - class and departmental interested in continuing in the same spirit - continues to read aloud the mantra about the Threatening Russia, which must be restrained by good old means. That is, pumping up Europe with military and military hysteria, increasing defense budgets and developing “plans B”. Because in fact, it is possible to add Russia, it is necessary to strain a little more, and it will turn out to be good enough. In general, give money. And at the same time, the point of view is voiced not just an alternative, but completely opposite:
— NATO? This block was created to counter the Soviet bloc. Now the main threat in the world is terrorism. And against terrorism, NATO does not work. I would get along with Putin.
This is, just in case, the leader of the Republican presidential race in the United States, Donald Trump.

And this clearly demonstrates that the project of world domination, started by 67 years ago, “did not take off” after all.

This does not mean that it is really minimized. Even under the US President Trump, NATO will continue to exist for a long time. Bureaucratic structures generally tend to experience their usefulness, sometimes for decades. For NATO, the prospect of becoming a sort of Holy Roman Empire of times of decline, which exists not so much for solving specific problems, as for the life support of the bureaucratic apparatus, is much more obvious.
And world tasks will be solved, as is proved today by practice, in a completely different way.

Ctrl Enter
Noticed oshЫbku Highlight text and press. Ctrl + Enter
We are
The structure of world dominationMilitary reform as an integral part of the security concept of the Russian Federation: Systematic dynamic assessment
Military Reviewin Yandex News
Military Reviewin Google News
34 comments
Information
Dear reader, to leave comments on the publication, you must sign in.