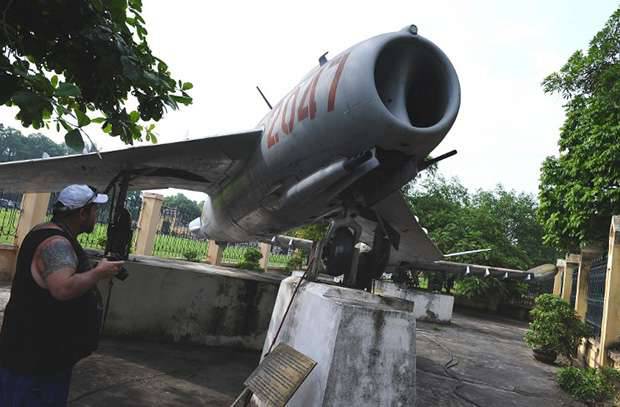 History The participation of Soviet military experts in the Vietnam War, which lasted almost ten years - from 1965 to 1975 - remains largely unexplored. The reason for this is the reinforced veil of secrecy, which still wraps up many episodes related to the activities of the Group of Soviet military specialists in Vietnam. Among them were military personnel of the air defense forces, and military intelligence, and military sailors - and of course, military pilots. Officially, Soviet fighters trained and trained Vietnamese colleagues who mastered Soviet and Chinese (that is, also Soviet, but licensed) aircraft. And they were directly prohibited from participating directly in hostilities. However, the war often cancels at all or temporarily many formal prohibitions. So do not be surprised that recently in the official sources of the Ministry of Defense of Russia there have appeared data that could hardly have been made public earlier. According to this information, the first significant victory of the Vietnam Air Force over the American aviation, gained on April 4, 1965, was in fact the work of Soviet pilots.

However, it is still formally considered that the 4 of April 1965, the eight of the American F-105 “Thunderchip” strike fighters in the skies over Thanh Hoa, was attacked by four Vietnamese pilots on MiG-17 airplanes. The Americans were going to bomb the Hamrang Bridge and the power station in Thinh Hoa, and their plans became known when reconnaissance planes were the first to go towards targets. When information appeared on the eight F-105, going to attack, two MiG-17 units from the 921 th Fighter Aviation Regiment of the Air Force of North Vietnam were raised to the sky. The result of the fight was two American Thundercifs shot down by Vietnamese airplanes, and the 4 day of April has been celebrated in Vietnam as Aviation Day since then.

Most likely, accurate information about who was in the cabins of the Vietnamese MiG-17, will appear only after they open access to the military archives of that era in Russia. So far this has not been done, and even the members of the Group of Soviet Military Specialists themselves in Vietnam often cannot access their own data — even their own reports and official memos. But in any case, whoever was the “author” of the 4 victory of April 1965 of the year, it was the first victory of the Soviet fighters over the American ones, won in the Vietnamese skies. And this victory was all the more valuable because it was won by subsonic fighters who were opposed by the enemy, capable of developing supersonic speed!

[center] Vietnamese pilots are preparing for takeoff. Photo: http://acepilots.com
[/ Center]
It is difficult for an uninitiated person to imagine how a subsonic aircraft can become a formidable opponent for a supersonic one: it is the same as trying, say, on a tractor to keep up with a car. But one has only to change the conditions - say, to put both of them off-road and the situation abruptly changes: the advantages of the tractor will come to the fore. Such a "tractor" was created at the very beginning of the 1950-s Soviet MiG-17. Formally, it was believed that he was able to reach the speed of sound, which allowed the wing of increased sweep, but in reality flew and maneuvered the “seventeenth” to subsonic speed. Which provided him with an advantage in close range combat, when it was more important that it was maneuvering opportunity, and not speed.

In turn, the American pilots who piloted the F-105 in the 1965 year were completely unaware of the danger of the MiG-17. The Thunderchiefs, armed with rockets and capable of carrying a substantial bomb load, were faster — but less maneuverable. In addition, the preparation of the first units, armed with these aircraft, was carried out in sterile field conditions, without any attempt to imitate the opposition of the enemy. And even after the F-105 was sent to Vietnam, their tactics during the ground attack remained unchanged. They were sent on a combat mission in a slim column of two, in links, retaining the flight mode most convenient for bombing, and completely disregarding that it was absolutely not suitable for air combat with enemy fighters. And the enemy, that is, the Vietnamese Air Force, whose actions were practiced to automatism under the strict guidance of Soviet military specialists and were also coordinated directly in the battle (at least by radio from ground command posts, and quite possibly, right in the air, if the pilots from the USSR actually participated in battles), did not fail to take advantage of this miscalculation.

Understanding that it will be difficult to catch up with “Thunderchief” in the tail, even if the enemy is completely loaded with bombs and significantly lost in speed, the MiG-17 pilots have adopted the tactics of ground ambushes and the imposition of an encounter melee. Early in the morning, one or two “seventeenth” links from their main airfield at ultra-low altitude flew to the airfield of a jump located near the highway used by the Americans (by the way, the habit of flying to attack and bombing the same routes also cost the US pilots too) . And as soon as it became known about the approach of the F-105, the MiG-17 took off into the air and met the “Thunderchiefs” with cannon fire, negating all their speed advantage. It was under these conditions that the Soviet aircraft’s maneuverability advantage and the presence of a cannon were best manifested: at short distances of maneuverable combat, the American air-to-air missiles of that time proved to be useless.

This is how the air battle of 4 on April 1965 of the year developed, which became the prologue to the big air battle over Vietnam. Its results were an unpleasant surprise for America: the overall score was ultimately in favor of the Vietnamese air force. And with a significant margin: only the MiG-17 ratio was one to one and a half, that is, at least 150 enemy aircraft shot down by the "seventeenth", had only about a hundred lost MiGs. And this is the colossal merit of Soviet military specialists, primarily fighter pilots who generously shared with Vietnamese comrades in arms their experience and tactical findings. So even if the 4 air battle of April 1965 was carried out exclusively by Vietnamese pilots, the “Russian trace” was more than significant. However, it should be taken into account how great the role of ideological work was in those years, and therefore it is not difficult to assume that even if the MiG-17 was piloted by Soviet pilots that day, North Vietnam simply couldn’t help ascribing this victory to its pilots - let alone that it fully complied with the requirements of secrecy, which was strictly followed by the Soviet side ...