The first guards ships of the Soviet Union 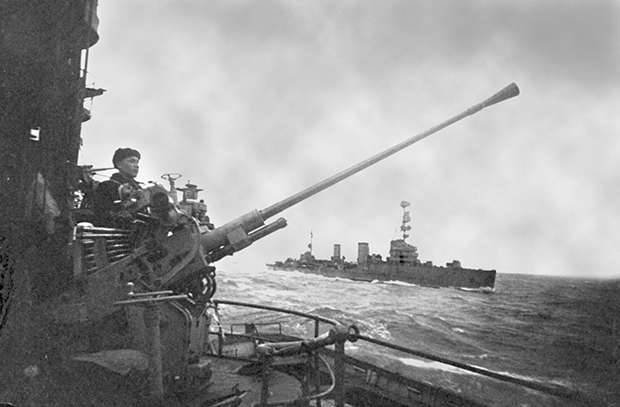 Russian Marine Guard conducts its history from the first quarter of the 1810th century. The first naval unit of the Russian imperial guard - the Guards crew - was formed only in 110, XNUMX years later than the first land guard units. After the October Revolution, the very notion of the guard was eliminated, and the return of the guard ranks in the Soviet navy again happened a little later than in the army! The first guard units of the ground forces in the USSR appeared on September 18, 1941, and the first guard ships received the title of guard only on April 3, 1942. By order No. 72 of the People's Commissar of the Navy Admiral Nikolai Kuznetsov, the guards became four submarines of the Northern Fleet: D-3 Krasnogvardeets, submarine K-22, M-171 and M-174. The first guards ships from the Red Banner Baltic Fleet were the destroyer Stoykiy, the Marty mine-layer and the Havel minesweeper. And only one warship of the Black Sea Fleet was awarded the guards title, but it was the largest and most powerful ship - the cruiser "Red Caucasus".

In fairness, it must be said that a little earlier, the Marine ranks and naval pilots who had fought hand in hand with the Red Army fighters from the first days of the war received the ranks. The 5 naval rifle brigade, renamed 1942 guards rifle brigade, was awarded the first 71 in January 2 of the Guards rank. On January 8, four more naval units became guards: three Baltic air regiments (the 1 th mine-torpedo and the 5 th and 13 th fighter, after being re-formed into the 1 th guards mine-torpedo and 3 th and 4 th fighter) and one air regiment of the Northern Fleet - 72-th mixed, after the assignment of the title became the 2-th Guards fighter. And 18 March 1942 was awarded the title of the Guards 75 th naval rifle brigade, which became the 3 th Guards rifle brigade

Until the end of the war the number of Guard ships, parts and connections of the Soviet Navy has increased substantially: 18 16 surface ships and submarines, combat boats 13 divisions, two air divisions, 20 regiments, two anti-aircraft artillery regiment, a brigade of marines and marine railway artillery brigade. The last guards unit in the fleet during the 26 war of September 1945 of the year was the 6 th Fighter Regiment, after assigning it was renamed the 22 th Guards Fighter Regiment of the Pacific Fleet.

But no matter how great the merits of the marines and naval pilots, the fleet is first and foremost warships. That is why the birthday of the marine guard in the Soviet Navy is considered to be 3 on April 1942 of the year. And the first Guards ships deserve to briefly but tell about the fate and the battle path of each of them.

The D-3 submarine was the third submarine of the first Soviet project of large submarines - series I. It was laid at the Baltic 5 plant in March 1927 of the year, 14 in November, 1931 of the year entered the sea forces of the Baltic Sea, and 21 in September of 1933, made the transition from Leningrad to Murmansk - to the structure of the Northern military flotilla. In February 1935, the submarine involved in the operation to support the activities of the first drifting polar station North Pole-1, for the first time in the history of the world submarine fleet, made an 30-minute sub-ice voyage. During World War II, the boat made seven combat campaigns and did not return from the eighth. D-3 became the first submarine in the USSR Navy to be awarded the title of Red Banner (the Order of the Red Banner of the Red Guard awarded 17 of January 1942 of the year) and the title of the Guard. According to official data from the Soviet side, the 12 torpedoes recorded 30 sunk ships with a total displacement of 8 28 brt and one damaged by the displacement of 140 brt, to the account of the “Red Guard” who committed 3200 torpedo attacks and fired XNUMX torpedoes.

This submarine actually repeated the fate of the D-3: the same eight combat campaigns, the last of which ended with the disappearance of the boat, the same entry into service first of the Baltic, and then the Northern Fleet. The boat was laid in Leningrad at the plant number 196 5 in January 1938 of the year according to the project of the XVI series - the largest Soviet submarines of the pre-war period - and after ten months it was launched. 7 August 1940, the boat became part of the Baltic, and October 30 1941, after crossing the White Sea-Baltic Canal - the Northern Fleet. K-22 has 9 sunk ships - transport and auxiliary, as well as warships. 7 February 1943, the submarine for the last time contacted the submarine K-3, with which she made a joint military campaign, and nothing more is known about her.

The “Baby” type XII submarine of the XII series was laid at 196 plant in Leningrad 10 September 1936 of the year, launched into 10 months, and 25 December 1937 of the year became part of the Baltic Fleet under the letter M-87. A year and a half later, 21 June 1939, the boat, having passed the White Sea Canal, reached Murmansk and became part of the Northern Fleet under the designation M-171. It was with this letter that the boat deserved its military glory, having performed 29 combat campaigns during the years of the Great Patriotic War, performed 20 torpedo attacks, launched 38 torpedoes and recorded two credible trophies: German Curryba 29 of the year German transport Curityba (XNUM) brt) and damaged 1942 January 4969, the German transport “Ilona Siemers” (29 brt). The submarine served as part of the Soviet Navy until 1943: in 3245 she returned to the Baltic as an underwater mine layer, in 1960 she switched to the training subclass, and 1945 in June 1950, after 30 years of service, was excluded from the list of Navy ships .

Like the M-171 submarine, the M-174 was laid in Leningrad, but a little later - April 29 1937 of the year, and when bookmarked it received the lettered designation M-91. 7 July 1938 of the year she was launched, and 21 June 1938 of the year she joined the Baltic Fleet. Both “Baby” got to the North at the same time, having made the transition along the White Sea-Baltic Canal from 15 May to 19 June 1939 of the year. The 21 of June 1939 of the year already named M-174 was included in the Northern Fleet, and she managed to make one combat campaign during the Winter War of 1939-40, although without success. During the Great Patriotic War, the boat made 17 combat campaigns, but from the last 14, launched in October 1943, did not return. During service, M-174 launched 3 torpedo attacks and launched 5 torpedoes, recording credibly confirmed German transport Emshörn (4301 brt), sunk 21 in December 1941 of the year. 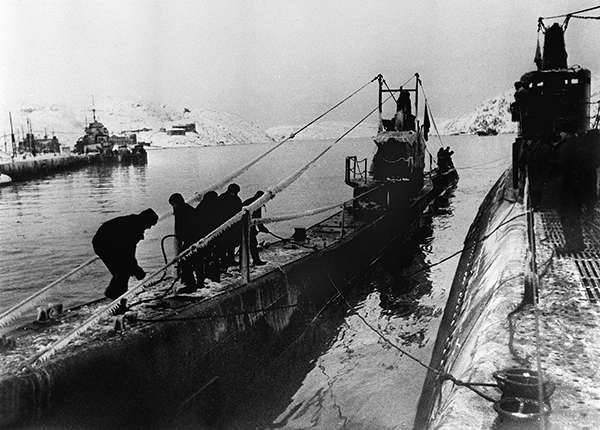 The submarine that sank the fascist transport approached the base pier. Photo: TASS
Guards squadron "Resistant"

This destroyer was laid in Leningrad, at the plant number XXUMX 190 August 26 of the year on the most massive pre-war project of Soviet destroyers. 1936 December 26 launched it, and on October 1938 18, the “Resistant” entered service and became part of the Red Banner Baltic Fleet. He fought from the very first day of the war, and his participation in the unique operation to evacuate the Soviet garrison of the Hanko Peninsula brought glory to this ship. A detachment of ships for this operation was formed on October 1940 30 of the year, and, among many others, it included “Resistant” and two other first Guards ships in the Baltic - the minzahraditel “Marti” and the minesweeper “Gafel”. But it was at “Resistance” that the squadron commander and operations leader, Vice Admiral Valentin Drozd, whose flag was assigned to the ship by 1941 February 13 of the year, held the flag after the death of the commander. The destroyer served in the Baltic until 1943, the last time - as a target ship.

This is the oldest among all the first Guards of the Soviet Navy. October 1 1893 was laid at the Danish shipyard as a royal steam yacht “Standart”, and after the launch of March 21 1895, he became the favorite yacht of the last Russian emperor Nicholas II. In 1917, the Centrobalt, the command of revolutionary sailors, was on its board, and after the legendary Ice Campaign from Helsingfors to Kronstadt, the yacht was put into storage. And only in 1936, the ship returned to service: it was converted into a minelayer. The “Marty” war, which received this name in 1938, met 22 June in the Tallinn roadstead, and on the night of June 23 entered the first battle of mines. During the war, "Marty" made 12 combat campaigns, put 3159 mines and shot down 6 enemy planes. He remained in service until the 1961 year, bringing the latest benefit to the fleet as a target ship for rocket firing.

Another participant of the legendary campaign to Hanko, the minesweeper "Gafel" was laid in Leningrad on October 12 1937 of the year on the 53 project - the most massive project of the base minesweepers of 1930-40. 23 July 1939, he entered service and entered the Baltic Fleet. He participated in the Winter War, met the war in Kronstadt, became famous as an active participant in the evacuation of the defenders of Hanko, trawling until the end of the war and ended his service in the 1 fleet of September 1955.

It was laid in Nikolaev in 1913 year as the light cruiser “Admiral Lazarev”, but in 1918 year the construction was interrupted. It resumed only in 1927 year, after the ship was renamed the "Red Caucasus". He entered into service 25 January 1932, becoming the most modern ship of the Soviet fleet at the time - and the last in its composition, which was laid in Tsarist Russia. The cruiser met the war in Sevastopol, and already 23 and 24 June engaged in setting minefields on the approaches to Sevastopol harbor. The "Red Caucasus" participated in the defense of Odessa and Sevastopol, in the Kerch-Feodosiya paratrooper at the end of December 1941. It was in Feodosia 4 on January 1942 of the year that the cruiser sustained heavy damage during the bombing, which put it in for repair for half a year. But already in August, the 1942-th "Red Caucasus" returned to service, and served until 21 in November 1952, when, already disarmed and turned into a target ship, served the last service, taking an anti-ship cruise missile from a Tu-4 bomber. It is symbolic that this happened in the region of Feodosia, and the ship 3 of January 1953 was excluded from the ship lists of the fleet.