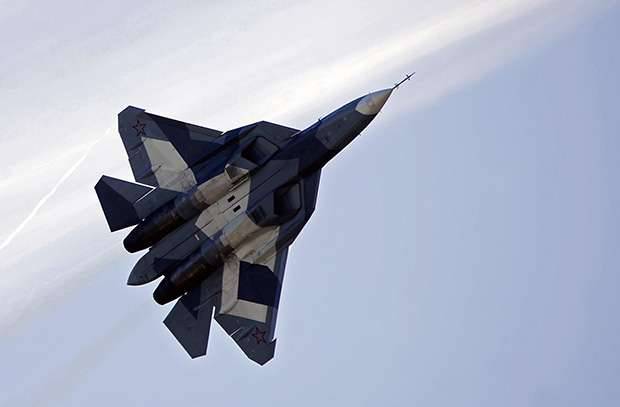 A promising front-line complex has not yet been adopted aviation T-50, and in Russia work began on the creation of a sixth generation fighter
Talk about the work on the sixth generation fighter received official confirmation. At a meeting on the development of the Russian military aviation 2 in March, the company "Sukhoi" announced the data on the development of such an aircraft in manned and unmanned versions. After the event, Deputy Prime Minister Dmitry Rogozin and Commander-in-Chief of the Air and Space Forces (VKS) of Russia Viktor Bondarev stated this. Having substantiated the need for such works: “If we stop now, we will stop forever,” Colonel-General Bondarev noted that airplanes are being created “... and of the sixth, and, probably, seventh” generation. According to him, unmanned fighters can be created in Russia in three years.

It would seem that in a situation of incomplete work with a promising aviation complex of front-line aviation (PAK FA) and known as T-50, it’s premature to talk about the next one. However, a look beyond the “horizon” is a global trend, an engine for the development of existing and creation of promising technologies. Finally, it is a guarantee that Russia will remain in the “pool” of world leaders and will not sink to the level of a “banana” republic with the loss of national dignity.

Optimists are inspired, skeptics persist in their doubts about the achievement of the tasks set, and pragmatists make cautious forecasts and suggestions for solving the latter. The truth of each of them in the current, very difficult economic conditions is not easy to assess today, because each opinion is usually reasonable. But one thing is certain, the truth is somewhere in the middle.

One of the "inspiring" arguments is the above and quite capacious statement of the Commander-in-Chief of the All-Union Confederation of the Armed Forces Viktor Bondarev. Indeed, promising work in the aircraft industry stimulates the creation of new materials, technologies and advanced end products. The airline industry, as the locomotive of our entire industry, accumulates the latest scientific and technological achievements, which are then introduced into other national economic sectors and our daily lives.

At one time, it was active work in aviation that brought our country into the leaders of the global aircraft industry, became the basis of victory in the Great Patriotic War. And today in this area we are on an equal footing with other leading countries. 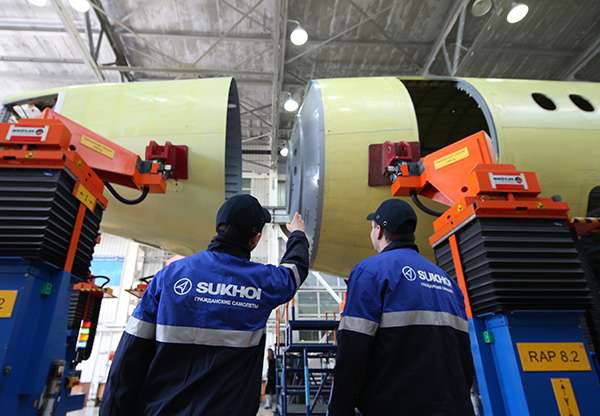 During the docking of the elements of the fuselage of the Sukhoi Superjet 100 aircraft at the enterprise "Sukhoi". Marina Lystseva / TASS
Skeptics

But there are reasons that cause skepticism about plans and opportunities for the development of our combat aircraft, the aircraft industry as a whole. First of all, it is connected with our fifth-generation multifunctional fighter T-50. The most common question is: when will the aircraft enter service with our own VKS with its own engine, and not its counterpart?

Statements about the arrival of the first T-50 serial fighter aircraft in the 2017 year, which were not once repeated, are not encouraging among skeptics. Perhaps their point of view would change the periodic coverage of encouraging results in this direction. In particular, such. After the meeting at the Sukhoi company, it was announced that the PAK FA tests were completed, which should carry out the first flight with its own second-stage engine (product 30) in 2018. In total, in the period up to 2020, the military should get fifth-generation 55 fighters.

Against the background of existing successes in the creation of combat aircraft and helicopters, skeptics point to a rather deplorable situation in the field of civil aviation. The vast majority of its aircraft, mostly not new, "flew" to us from abroad. There is no special reason to believe that they appeared with us according to the principle: “God for you, that we are not worthy,” nevertheless, their dominance on the domestic and external routes of Russian airlines is a very good reason for skepticism about the possibilities of producing our own aircraft.

As a result, there are questions like, but where are our famous civil aircraft of the “Tu”, “Il”, “Yak” brands? Why did you decide to attract foreign pilots to work in Russia, and the implementation of domestic developments is strongly hampered? And these are just some of the many. There are no encouraging answers to such questions, which does not allow skeptics to move to another “weight” category.

It can be assumed that this category is closest to the truth and occupies the “golden” middle. Supporting the first, they soberly assess the existing situation, and, agreeing with the second on some issues, indicate the most acceptable, in their view, ways to eliminate the reasons for skepticism. The basis for pragmatists and their approach to assessing the state of affairs in the aviation industry is the principle of achieving the desired, taking into account the real possibilities for this.

It must be assumed that it is their assessments and proposals that should underlie the decisions and actions taken for the further development of the Russian aviation industry. Otherwise, the end result will be overstated or completely unjustified government spending, the loss of priorities, promising areas and projects. And there are such examples in both the combat and civil aviation sectors. Pointing to the “thin” places of pragmatics, thus they give directions for improvement and the elimination of shortcomings.

Even more violations of real approaches to the creation of new types of pragmatists are noted in the field of civil aviation. It is enough to remember what efforts and funds were spent on the creation and promotion of the Russian short-haul Superjet-100 aircraft (Sukhoi Superjet 100, SSJ 100). But the expected breakthrough in this area, solid orders for its production and improvement of the situation in the domestic air transportation market did not happen. This example, in conjunction with the above, about airplanes of the type “Tu”, “Il”, “Be”, “Yak” and others - vividly confirms the correctness of the assessment of the situation by pragmatists and the development of recommendations corresponding to it.

The conclusion is obvious - the work on the fighter of the sixth generation is objectively necessary. Otherwise, we again find ourselves in the role of catch-up, as happened with the electronics. But it should be remembered that any new development requires appropriate and, as a rule, considerable funding. In the current situation it is one of the most important “stumbling blocks”. Today it is necessary, with a minimum of government expenditures on a competitive basis, to ensure that all those who are able to make a real contribution can participate in this work. Only after selecting the project that meets the requirements of the customer, to ensure its state financing in strict compliance with the designated deadlines. Obtaining a state order for the creation of a specific sample should be a “reward” and an incentive for all equally.

As for the likely appearance of the sixth generation fighter, then it makes sense to listen to the arguments of the pragmatists. Pavel Ivanov, editor-in-chief of Aviapanorama, expressed it in a concentrated form. He believes that "a super-advanced FA complex (SPAK FA)," as he conditionally calls the new future complex for front-line aviation, "must be unmanned ...". However, the current "technological level allows us to rely more on a dual variant SPAK FA", which will allow "some of the combat missions to be solved by unmanned aircraft, and some by manned aircraft. Such a decision has already been voiced, and it is based on deep common sense. ”

Ivanov believes that "SPAK FA" should be "substantially lighter, as well as cheaper than the PAK FA", which is one of the "natural conditions for creating a fleet of aircraft that is significant for national defense in real terms".

In addition, it is necessary to take into account the existing experience. According to Ivanov, it is important not to step on the American rake, but to carefully circumvent them, and, in his opinion, one should not dive deep into developments “far ahead of their time”. He considers the latter condition more suitable for “PR in political games, in internal competition”. “With a very limited budget and a shortage of time that has not suddenly arisen,” the victories in them “turn into considerable losses for the country, and in the worst case such developments become a quality reserve for foreign projects,” says Aviapanorama's editor-in-chief.

If we summarize the existing opinions on this topic, we can assume the following. High cost will be one of the decisive factors in expanding the functionality of the sixth generation fighter. Chances are of using stealth technologies when creating them. With a supersonic cruising airspeed, the aircraft of the sixth generation will have super-maneuverability, a long range and be equipped with the most modern high-precision weapons.

"Six" will be able to operate in a single combat information and control system. It can also be assumed that this aircraft will be used in manned and unmanned modes. It is not excluded that this machine will inherit much from its predecessor.

Thus, work on the sixth generation combat fighter is necessary, but taking into account the current economic realities, the capabilities of the state and the experience gained in the development and testing of the PAK FA.

Ctrl Enter
Noticed oshЫbku Highlight text and press. Ctrl + Enter
We are
New bomber for long-range aviation: pros and consFrom 2025, PAK FA and F-35 will be the only alternatives in the global fighter market.
Military Reviewin Yandex News
Military Reviewin Google News
88 comments
Information
Dear reader, to leave comments on the publication, you must sign in.