How many "Nagorno-Karabakh" smolders in Central Asia?

April 5 2016
196
The Donbass is on fire, Nagorno-Karabakh has broken out, the Moldovan defense minister continues to talk about the fact that if Russia does not withdraw from Transnistria, then something will happen, South and North Korean partners will not decide at any one time who will be the first " preventively "strangle. And this is not to mention the very difficult situation around South Ossetia and Abkhazia, continuing to Kiev, the statements of the Turkmen leader that he is ready to help Azerbaijan in the Nagorno-Karabakh Republic, if necessary, not only with words, but also with military affairs. In this situation, the question is brewing: in what place at the borders of the Russian Federation will the next session of testing Russia for strength?


One of such regions, where the potential Karabakh is not one and not two, is the Central Asian region. There are no unrecognized republics, but there are territorial claims, and not even between the two countries (as in the case of Armenia and Azerbaijan), but between whole conglomerates, including Kyrgyzstan, Uzbekistan and Tajikistan, for example. And you can say that the likelihood of armed conflict in this region - in fact, near the borders of Russia - is sucked from the finger, but in fact everything is more than serious. And the fact that in the Central Asian region is full of unresolved interstate and inter-ethnic disputes, recently announced, for example, the Kyrgyz leader Almazbek Atambayev.

Kyrgyz Telegraph Agency reports that President Atambayev took part in events dedicated to the anniversary of the events of the so-called "Tulip Revolution" and called his predecessor Kurmanbek Bakiyev a representative of a "little family who is more terrible than Akaev" and who brought with him "bandyugans". After that, Atambayev stated that Kyrgyzstan has about fifty (!) Disputed territorial objects with Uzbekistan, adding that “Kyrgyzstan will definitely return its territories”.

It is worth noting that such rhetoric of Atambayev was preceded by the transfer of additional paramilitary Uzbek units reinforced by armored vehicles to the border with Kyrgyzstan. At first, the Uzbek authorities stated that armored personnel carriers and machine guns along the border, they say, are designed to help “avoid excesses during the celebration of Nowruz,” but then, apparently realizing that such “excuse” looks somewhat ridiculous, official Tashkent used different rhetoric. According to the representative of the Ministry of Foreign Affairs of Uzbekistan, Bishkek attempted to transfer under its jurisdiction several objects located in the disputed border areas, which forced Tashkent to respond. In particular, we are talking about reservoirs, the value of which for the states of Central Asia is truly more precious than gold - for obvious reasons.

If we talk about the state of affairs on the Uzbek-Kyrgyz border, then legally and diplomatically it is full of seams. By the most conservative estimates, about 350 km of the border (of more than 1300) are the subject of fierce disputes. Maps of the two states since the collapse of the Soviet Union (during the existence of the USSR, border problems also manifested themselves, but they were not so sharp as the borders were not state-like) are completely different documents. Uzbekistan believes that the border should be considered on the basis of documentary evidence from the 1927 year, while in Kyrgyzstan, the 1927 certificate of the year is considered obsolete and take into account the boundaries of the republic of the 1950 variant. Moreover, dozens of kilometers of the 90 border remain mined and no Russian engineers either Tashkent or Bishkek are going to invite anyone to assist in mine clearance ...

Border areas of Kyrgyzstan and Uzbekistan resemble scattered peas. “Peas” are numerous enclaves (exclaves). Moreover, inside the Uzbek exclaves may be located Kyrgyz or Tajik villages. A sort of Central Asian "matryoshka", when in one enclave "hiding" another. 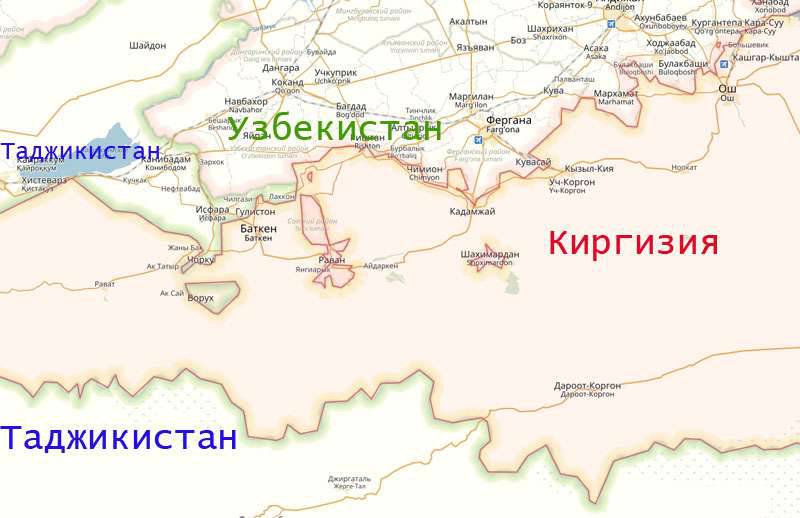 The disputed territories for which neighboring Tajikistan also claims are the Vorukh enclave. More precisely, Kyrgyzstan claims it, and officially Vorukh - as if the territory of Tajikistan with a population of about 30 thousand, surrounded by the territory of the Republic of Kyrgyzstan. Since the end of 90, this piece of mountainous land has been the subject of more than serious controversy. It got to the point that official Dushanbe put his checkpoints in an exclave and began to collect customs fees from the Kirghiz, who moved through the enclave. A similar move was made by the Kyrgyz for the Tajiks, who wanted from Vorukh to get into the "main part" of Tajikistan ... The vicious circle, which continually led to clashes, often with the use of weapons.
A few dozen kilometers from Vorukh is the Uzbek exclave of Sokh - Sokh District of Uzbekistan, surrounded by Kyrgyz territory. A road connecting the Kyrgyz Batken with Osh and the rest of Kyrgyzstan passes through this exclave (for Kyrgyzstan, an enclave). However, the difficulty is also in the fact that the ownership of Sokh (Sokh district) does not give Uzbekistan itself, if one may say so, special dividends for Uzbekistan. And not only because the Sokh region is territorially “locked up” by Kyrgyzstan, but also because of the approximately 9,5 thousand of its inhabitants, more than 90% are ethnic Tajiks. And these people, being de jure citizens of Uzbekistan, are not at all inclined to show their “Uzbek” civil commitment de facto ... They want to attribute their land to Tajikistan, but, as they say, who will ask them what they want even if they say a thousand times that Tashkent is “occupying” their native lands.

In addition to the Sokh district and Vorukh, there are several other relatively large disputed areas. One of these is the Uzbek Shahimardan, which is remote inland Kyrgyzstan approximately 15 km. This is a district with a population of more than 10 thousand people, of which about 9,2 thousand are Uzbeks. But there are villages in which ethnic Kyrgyz live.

And such disputed territories, on which various ethnic groups live, are far from being complacent with each other, in this region (talking about the Fergana Valley) is a dime a dozen. Any spark, any provocation, even the most minimal, is enough to make the region glow. And in such a situation, it is even scary to imagine that it could erupt in these territories, where the facts of massacre, open fighting, and the centers of the beginning of state coups have already manifested themselves.

For examples, historically, no need to go far. Year 1999 - Batken war, during which the militants of the so-called "Islamic Movement of Uzbekistan" made an attempt to break through Kyrgyz territory from Tajikistan to Uzbekistan, capturing several Kyrgyz soldiers. The antiterrorist operation lasted about 2 months. 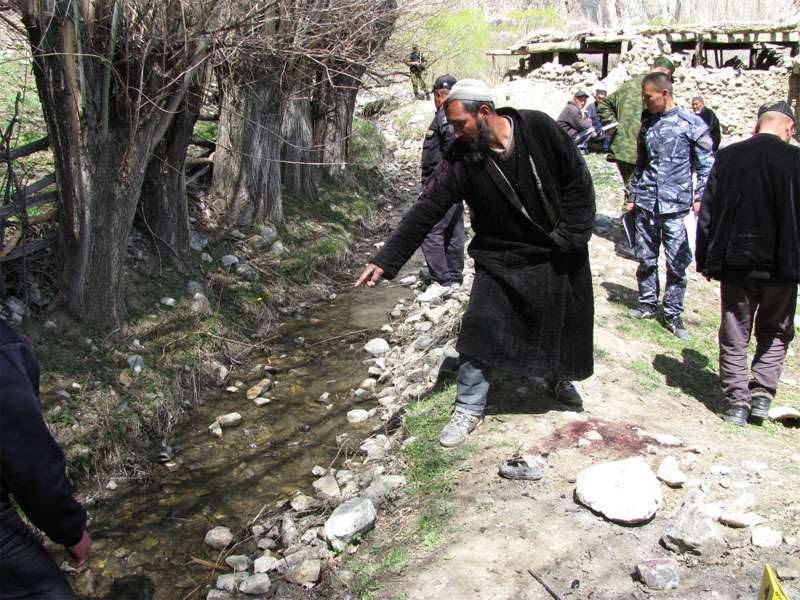 According to the official data of Bishkek, 32 people were killed near Batken (15 soldiers and 17 civilians) and at least 1,1 thousands of militants were killed. Today, experts say that the Kyrgyz authorities then clearly underestimated their losses and overestimated the losses of the enemy.

If the parties also operate here with bellicose rhetoric, then it is likely that in this direction our common “friends” will try to play the favorite destabilization card with all the consequences.