April 4 2016
111
The President of the Republic of Armenia, Serzh Sargsyan, stated that in the event of further aggravation of the situation in Nagorno-Karabakh, the authorities of the country will decide to recognize the independence of the Nagorno-Karabakh Republic. The Armenian president made such a statement during the reception of the diplomatic representatives of the OSCE countries. Information Agency TASS quotes Sargsyan's statement:

As a party to the 1994 ceasefire agreement, Armenia will continue to fulfill its responsibilities to ensure the safety of the people of Nagorno-Karabakh. Further exacerbation of hostilities can lead to unpredictable and irreversible consequences, up to a large-scale war. This, naturally, will have an impact on security and stability not only in the South Caucasus, but also in the European region. If hostilities continue and gain wide scope, Armenia will recognize the independence of Nagorno-Karabakh. 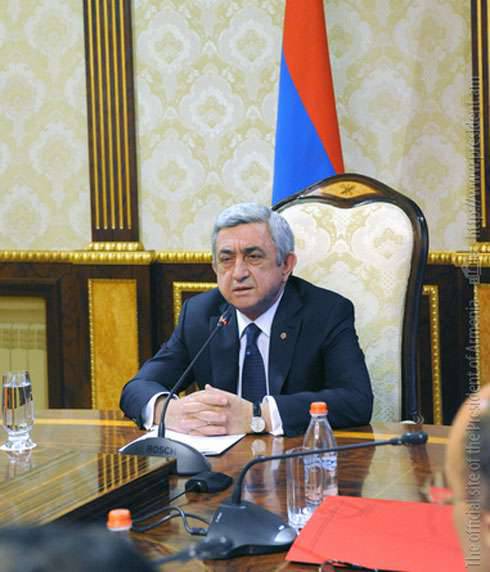 Recall that in the NKR the third day the fighting continues, in which the following types of weapons are involved: armored vehicles, artillery, aviationmortars. More than 30 people died on both sides. This is official data.

Ctrl Enter
Noticed oshЫbku Highlight text and press. Ctrl + Enter
We are
Serzh Sargsyan and Ilham Aliyev in Vienna agreed to continue the implementation of measures to de-escalate the conflict in Nagorno-KarabakhNew war in the Caucasus be?
Military Reviewin Yandex News
Military Reviewin Google News
111 comments
Information
Dear reader, to leave comments on the publication, you must sign in.