The loins of a non-systemic opposition, a "very scary movie" about Putin and the depth of the program of one of the parliamentary parties

April 5 2016
354
Less than five and a half months remain before the elections to the State Duma of the Russian Federation (the first elections with a five-year time interval), and therefore I want to pay attention to how the political forces of the Russian Federation are preparing to take (or not to take) participation in these elections. Five and a half months - the term from the point of view of political preparation for a large-scale candy-bouquet period for the electorate is not that great, and therefore it will be particularly entertaining to appeal to at least party hints about what “sweets” and “bouquets” Russian political forces will prepare people for the next 5-year period of “living together”.


The political program of Parnassus in the form of naked, forgive, the backside of “a person resembling” Mikhail Kasyanov and the intimate speeches of him during a “personal meeting” with a colleague (of the “opposite” gender) are not clear ... on the face ... Or rather, on a completely different part of the body ... And so, frankly, it would be strange to concentrate on information about such a "party" preparation for elections to the State Duma.

Perhaps it would be worthwhile to pay attention to the preparations for the Russian elections of the Western interested "elites" who presented the same film, after watching which the world was supposed to "stop being the same." The so-called journalist Drew Sullivan gave material that the Russian president is, you know, a corrupt official and the owner of “factories, newspapers, steamboats”, as well as a “seducer of gullible ladies” and “exploiter of Panamanian offshore companies” (still - Putin has a tracksuit ... for "probably", 3 thousand dollars ...), and all the other world leaders are adherents of crystal honesty, altruists and angels about white wings ... It would be worth paying attention to that, but only materialchik, by and large, in the informational context is similar to the material bare ass "human-like" Mikhail Kasyanov. In general, something from the category of an extraordinary release of impassable boulevardism, by the method of which some try to sting others, while others try to sting in the opposite direction.

Another thing is to pay attention to the information preparation for the elections by representatives of those political forces who are ready to actually participate in the parliamentary race as candidates. And while the list of candidates (parties) officially announced by the new CEC head Ella Pamfilova is not available, you can afford to ask about the program areas that parliamentary parties are today - that is, those who will participate in the forthcoming elections by definition. As they say, the electorate should know not only what size is the fifth point of the main inhabitant of PARNAS, but also the real points of the real political programs of real parties.

The method of blind copyright lot was shown by the Communist Party of the Russian Federation, and therefore in this material it will be a matter of the political program that the party with the permanent leader in the person of Gennady Zyuganov proposes.

The press service of the Communist Party of the Russian Federation distributes a brief information on how this party is positioning itself today, which, incidentally, is the second with the 11,57% result in the 2011 election of the year.

So, help:
The motto of the Communist Party of the Russian Federation “Russia, work, democracy, socialism!” Is the four-word focused meaning of the communist struggle.
By deception and violence, the country is returned to capitalism. This is the path of social regress leading to a national catastrophe, the death of the Russian, Russian civilization. The Communist Party of the Russian Federation waged an uncompromising struggle against the restoration of capitalism, the destruction of the USSR and the destruction of Soviet power. Today the Communist Party of the Russian Federation is the only political organization that consistently defends the rights of people in wage labor and national state interests. The strategic goal of the party is to build in Russia a renewed socialism, socialism of the 21st century.
How does the party of Gennady Zyuganov, who in 1996 had reconciled with the “fake” defeat from Boris Yeltsin, allegedly with the aim of “not escalating the situation in the country”, is going to build a renewed socialism in the Russian Federation? For this, it is worth referring to the list of sections bearing the single name “What the Communists are fighting for”. The list at the moment is as follows:

Education for all.
Worthy youth policy.
Honest and free elections. Democracy.
The development of our culture.
For honest and truthful media.
Russian, friendship among peoples. The national liberation struggle
For the people's army.
For industrialization.
For the best future of children.
Against police and administrative arbitrariness
For the revival of the Russian village.
For a fair social policy

The list, of course, is more than serious, and therefore it is worth touching in more detail at least one of the points of the program, as if called upon to reveal what the politicians who call themselves communists today are fighting for. Given the fact that the main focus of our information and analytical portal is a military issue, the point “For the People’s Army” should be touched.

That's just a pity that no one will see any program under this item, but instead the Communist Party of the Russian Federation introduces materials on how representatives of the party took part in various celebrations on the occasion of one or another anniversary or of a particular military holiday ... , procession, participation in TV programs ... 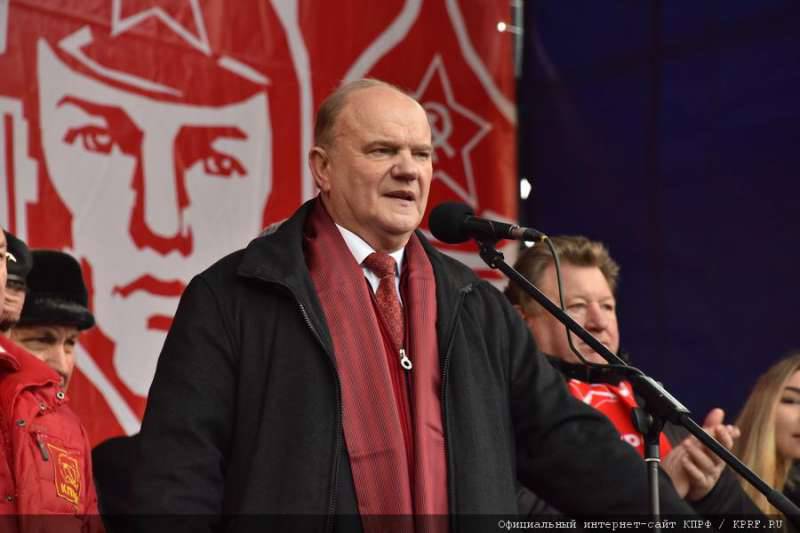 Of course, the electorate may be interested in exactly when and with whom a particular deputy celebrated, for example, the 98 anniversary of the formation of the Soviet Army, but still, it seems that this is somewhat not the kind of information that can attract the attention of a potential voter to the program party. Or is there no such task before the party today? ..

Speaking of program KPRF. Perhaps it is in it that one can find the concrete definition of all those steps that should lead to the creation of a people's army, which is mentioned in the above mentioned list. Or at least get the definition of this very popular army. However, in the program of the Communist Party about this, too, not a word. There are many words about the need to build socialism against the background of decaying capitalism, there are words of Lenin about “sticking alien elements”, underestimating the danger of the processes occurring in and around Russia ... There are also words about the need to “establish the democratic power of the working people” also that the Communist Party "after establishing political and economic stability in the country" will take some measures to expand the powers of workers in governing the country. Well, there is another expanded list of how the Communist Party will restore high standards of education and medicine, form a system of government responsibility for housing and housing and communal services, create an independent judicial system, support entrepreneurship, and even return all assets in Russia and nationalize strategic industries. and natural wealth. That's it ...

And again everything is very beautiful, but, frankly speaking (and this, as someone might think, is not an attempt to quip, but an ordinary statement of fact), it smacks of populism very, very much. Again, there is not a word about the “people's army”, and therefore it seems that in the previous list this term appeared either by accident or by this way the CPRF tried to attract the attention of those who really cares for the Russian army (for example, the Military Review readers) without developing the idea to the end (if this idea exists at all).

And it also seems that the “program of the Communist Party of the Russian Federation” seems to be frozen in time. Perhaps she would not have raised questions even 20 years ago, because we (the Russians) then, as the well-known social advertising said, should have “vote with our hearts”. But now, more and more of those who really get a grasp of the programs, trying to understand how much their points correspond to reality.

And the main thing is that it does not happen that such programs were originally conceived for “those who vote with the heart” and other internal organs without engaging the brain. After all, everyone is able to answer the question “what to do?” (And no programs are needed), but the question “how?” Already, as they say, is not so simple ...