April 5 2016
14
1 in April at the International Multimedia Press Center MIA “Russia Today” held a video link Moscow - Berlin on the topic: “The European Union in the face of new threats and challenges: illegal migration and terrorism. Ways to minimize. The topic is, as they say, topical, since the space bridge was held on the eve of the first expulsion of illegal immigrants by the European Union, scheduled for April 4. 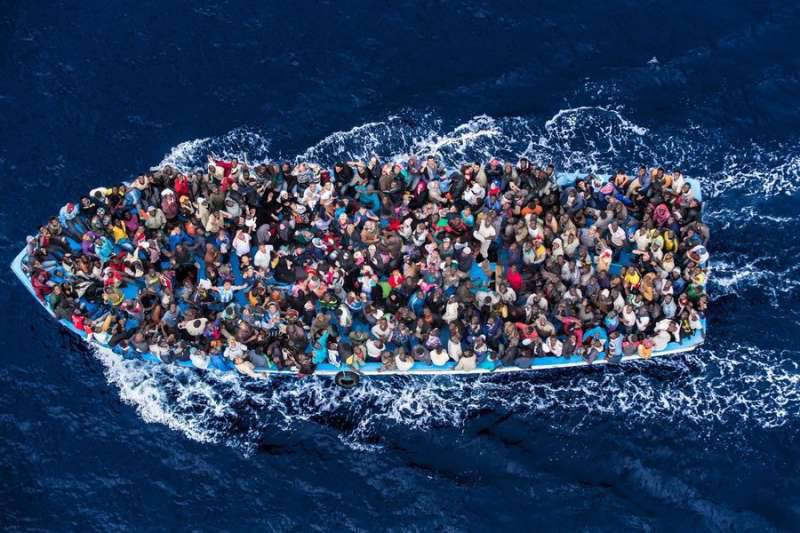 1 April at 13: 00 at the International Multimedia Press Center MIA "Russia Today" The Moscow – Berlin video bridge was held on the topic of migration and new threats to the European Union.

The relevance of the event was justified by the upcoming date: on 4 of April, the European Union had planned the expulsion of illegal immigrants who entered Greece by sea from the coast of Turkey. At the same time, the reception of “legal refugees” from Turkey was “announced”.

The EU deal with Turkey cost Brussels 6 billion euros. In addition, Ankara has pulled out from the EU a promise to ease the visa regime and speed up the process of Turkey’s accession to the European Union.

Later, the opinions of experts who had highlighted the stated problems became known. Their leads RIA News".

According to the experts who participated in the Moscow-Berlin video link, organized by the “Russia Today” MIA, the EU agreement with Turkey is only a temporary solution to the problem.

Europe is experiencing the largest migration crisis: according to Frontex, only in 2015 did 1,8 million migrants arrive in the EU. On March 18, EU Heads of State agreed with Turkey on a plan to combat the migration crisis. The agreement assumes the return to Turkey of all illegal immigrants who arrived in Greece from Turkish territory, and the EU accepts legal Syrian migrants from Turkey on a one-to-one basis, RIA notes "News».

According to Nikolai Topornin, an associate professor at the Department of European Law at MGIMO (U) of the Ministry of Foreign Affairs of the Russian Federation, the main problem for the EU is that national governments, and not EU structures, deal with migration issues.

The Dublin agreement from 1990 of the year establishes that the country where the migrant arrives for the first time will have to deal with migrants. And if 700 thousands of refugees cross the border of Greece, Greece should deal with them. “Obviously, even with all the desire, Greece, suppose it exists, is simply unable to accept these refugees,” said the expert.

And if so, the European Union should reconsider its approach to migration issues: “The European Union has a big task in revising these principles and standards of the Dublin agreement. The second point is that it is necessary to develop a unified European migration legislation. It seems to me that today it is necessary to re-develop immigration legislation that would meet today's realities. ”

According to Topornin, the agreement with Turkey does not solve the problem. At best, it can be considered as a temporary solution. The expert recalled that now there is information about the sharply increased flow of migrants from Libya towards Italy.

Gulistan Gürbe, a teacher at the Free University of Berlin, also noted that an agreement with Turkey can only be a temporary solution. In addition, she is pessimistic about harmonizing migration policy in the EU: “Within the EU, states always pursue their own migration policy and asylum policy. It will not be easy to achieve such harmonization, I think this will not happen in the coming years. I think these differences will only increase. ”

An expert from Germany, Andreas Wer, generally announced the possibility of the EU disintegrating. According to him, the differences in approaches to solving the migration crisis is a "trigger for the further disintegration of the EU."

“This mine was laid long ago under the EU in the migration issue. In any case, it is not defused. This deal with Turkey in no way neutralized it. ”

Despite the obvious questions (human rights in Turkey, Erdogan’s policy, Northern Cyprus and others), the agreement reached by the EU with Turkey is a civilized deal, the first step towards settling the migration problem, leads the opinion of the Deputy Director of the Institute of Europe, Russian Academy of Sciences Vladislav Belov "Reedus".

The EU makes it clear with this deal: the union is ready to accept refugees, but only legal ones. But with illegal immigrants will not stand on ceremony.

After the conclusion of an agreement between the EU and Turkey, the influx of migrants to Greece and Germany was significantly reduced, the newspaper notes.

According to the agreement of Ankara and Brussels in the morning of this day, the first ships with migrants began to leave the Greek islands of Lesbos and Chios in the direction of the Turkish port of Dikili in the province of Izmir, the TV channel "Euronews".

We are talking about illegal migrants who arrived not from combat zones, but from Pakistan, Bangladesh and Morocco "in search of a better life."

It clarifies the "Euronews", the operation takes place under intensive police supervision and control of NATO patrol ships.

On the banks of the illegal immigrants meet representatives of migration services, police, doctors, as well as numerous journalists, said RIA News".

It is also reported that, first, migrants will be accommodated in a tent camp in Dikili, then, after a medical examination and legal procedures, they will be sent to other provinces of the country.

Thus, Erdogan received from Europe everything he wanted: 6 billion euros, as well as promises to ease the visa regime and speed up the process of Turkey’s accession to the European Union.

On the other hand, to promise is not to marry.

Observed and commented on Oleg Chuvakin
- especially for topwar.ru
Ctrl Enter
Noticed oshЫbku Highlight text and press. Ctrl + Enter
We are
Ukrainian migrants in Russia. Since 1, the illegal immigrants will be deportedRefugees from Syria. Will Russia accept immigrants from the Middle East?
Military Reviewin Yandex News
Military Reviewin Google News
14 comments
Information
Dear reader, to leave comments on the publication, you must sign in.