Project "ZZ". They really want to be friends with Russia

April 4 2016
117
6 April in the Netherlands held a referendum in which people decide whether to support the association agreement of the European Union with Ukraine. Analysts believe that residents of the country will vote against. Meanwhile, American director Oliver Stone said that Hillary Clinton is praying for NATO and faithfully believing in "Russian aggression." However, in reality, Stone points out, it is the United States that is building up forces on the European borders of Russia, becoming like Hitler. Against this background, Austria supported normal relations with Russia, the Polish Peasant Party called for the lifting of anti-Russian sanctions, and the Canadian Foreign Minister expressed readiness to resume diplomatic relations with Moscow. 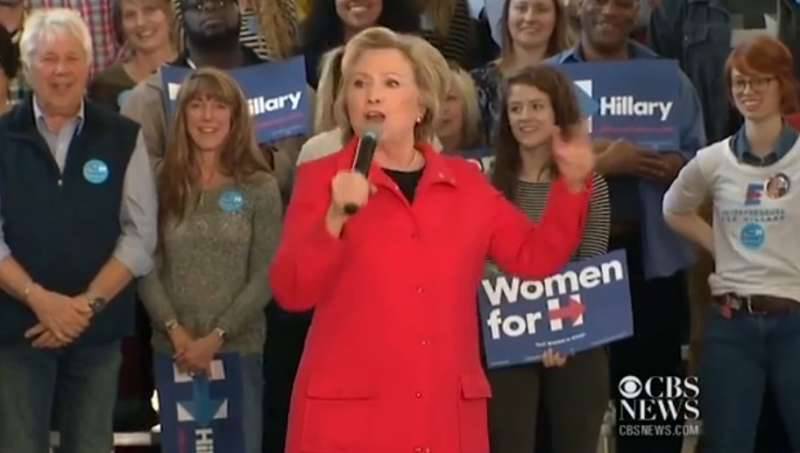 Hillary Clinton (the lady in red) prays the god of NATO and believes in "Russian aggression." And she can bark

Как Recalls Mattias Krupa in the newspaper Die Zeit, 6 in April in the Netherlands will hold a referendum in which people will answer the question: should the EU Association Agreement with Ukraine be ratified?

It was for this supposedly coming association that the Ukrainians spoke at the turn of 2013-2014. on "euromaidan". Kyiv residents and everyone else believed that the association would be and that they would be able to travel to EU countries without a visa. True, the new authorities must, prior to the association, carry out “large-scale reforms” and, first of all, defeat corruption. It is far from victory over the latter, but hopes remain ... However, what are these hopes worth, if Europe itself does not wish to let Ukrainians into it without visas?

The Dutch can easily go against their own government and say a clear “no” in a referendum. And without the consent of the Netherlands, the whole Brussels policy towards Ukraine will go to hell with dogs.

Netherlands Foreign Minister Bert Kunders says with a shudder that if the Netherlands rejects the agreement, “Putin will open a bottle of champagne.”

More than a decade ago (in June 2005 of the year) the Dutch have already voted, showing a fig to the European Union: over 60% of voters have spoken against the treaty on the EU Constitution. Since then, the number of euro skeptics has only grown, including due to the influx of migrants.

Today in the Netherlands, the Socialist Party rejects an agreement with Ukraine. Socialists believe that because of such an agreement, American interests will prevail in European politics, and transnational corporations will get involved in politics. Expansion will lead to greater unemployment in Europe.

To launch the referendum, 300 thousands of signatures were required, and more than 470 thousands were collected. Surveys show that today opponents of the agreement with Ukraine are confidently leading.

What will the government do if the people vote against it (even if the referendum results are not formally binding)? Apparently, the authorities will ignore the popular will. But then they will only confirm the existing prejudices of Moscow against the undemocratic decisions of Europe. And what will happen if the authorities of the Netherlands accept the will of the people? And this will also be a joy for Putin: another political crisis will break out in the EU. Yes, Putin will need to drink champagne.

American director and screenwriter Oliver Stone recently laid out in "Facebook" An essay in which he spoke impartially about Hillary Clinton and explained why he wants to vote for Bernie Sanders.

Stone notes with bitterness that everything is clear, "the die is cast, and Clinton will win." And yet we must hope for the best.

He believes that Americans need to understand: Hillary Clinton "actually closed the door to the world." She prays to the god of NATO, believes in American "exclusivity", which Washington will certainly have to export in the new "American century".

This thinking refers to the traditional spirit of Atlantic in the Second World War, when NATO “dominated the universe” as if it were carved on stone tablets. And it seems that not a single president, not a single democratic vote or dissenting media can change this order. Americans are going to live like this “forevermore” and wage wars for the next 10, 20, 100 years, and so on.

Neo-cons and Clinton, together with NATO, firmly believe in the theses on “Russian aggression”. Sorry, but this is because the United States is maximizing its strength on the European borders of Russia - something like Hitler did during World War II, Stone notes.

Where is the White House torn? To war with Russia? Why, such a war "will destroy" the United States.

Hillary Clinton is comparable to the “mad Madeleine Albright,” with “one of the worst US secretaries of state”, the author notes. Albright once boasted: “If we have to use force, it is because we are America; we are an indispensable nation. We stand high and see far away - we look into the future further than other countries. ”

That is why Stone stands for Bernie Sanders: he alone is ready to reduce the number of US foreign interventions, bring the military home and stop spending trillions of dollars on attempts to "protect the homeland." Sanders director considers the only one who raised his voice against corruption in US policy. H. Clinton shares this corruption.

«Bloomberg» says that after the 20 months of sanctions, the “neutral country” Austria advocated “normal” relations with Russia.

Austrian Finance Minister Hans Jörg Schelling told reporters in St. Petersburg that these very “normal relations” with Russia should become a goal in the long run. He said this on the eve of the signing of an agreement by the oil company OMV AG and the Russian Gazprom on the asset swap in Siberia and the North Sea.

A few hours later, Austrian President Heinz Fischer announced that he would travel to Russia and on April 5 will meet with Vladimir Putin. Negotiations will include a discussion of "bilateral trade, economic, cultural and humanitarian cooperation" (information from the Kremlin). Fisher will be joined by the Foreign Minister, Mr. Kurtz, and three other members of the Austrian Government.

These actions expose the problems facing German Chancellor Angela Merkel, who is trying to preserve the unity of the EU countries over anti-Russian sanctions. EU countries, including Austria, will soon have to decide whether to extend the term of restrictive measures.

In the meantime, the Polish Peasant Party came out in favor of lifting European sanctions on Russia. The corresponding statement was made at a meeting of the High Council of the Party, held in Warsaw on April 2, reports "Lenta.ru" with reference to Polskie Radio.

The head of the party, Vladislav Kosinyak-Kamysh, says that as a result of the reciprocal Russian embargo on food from the European Union, Polish farmers have suffered the greatest losses. According to him, the government is obliged to take care of farmers.

“It cannot be that for several years the political issues between the EU and Russia have not been resolved, and Polish farmers and businessmen are suffering from this. It is necessary to cancel the embargo, and political issues need to be solved in another way, ”the politician said.

Canada is also in favor of restoring ties with Russia. This is reported on the pages of the Canadian edition of the international edition. "The Huffington Post".

After all, Canada could win by cooperating with Russia on climate change issues in the Arctic and in actions against the “Islamic State”. At the same time, Canada could help Ukraine, as well as help Europe "stabilize the situation in the center of the continent."

True, Mr. Dion confirmed that Canada will continue to support Ukraine and oppose the annexation of the Crimea to Russia and Moscow’s support for “separatists in eastern Ukraine”.

However, according to Dion, the current period is much worse than during the Cold War: after all, Canada negotiated with Russia even during the latter. “Canada talked to Russians even in the difficult times of the Cold War. And now we do not speak with them ... because of the policy of the former government, - Dion noted. - How does this help Ukraine? How does this help advance our interests in the Arctic? ”Under the previous government, Canada“ self-isolated, ”the politician concluded.

Another nail in the lid of a European coffin can be scored by a referendum in the Netherlands, scheduled for April 6. His result will surely become a serious test for the government of the country, as well as for the European Union, which has started an “association” with Ukraine.

For Americans, the choice of President Hillary Clinton - Madame, who firmly believes in "Russian aggression" and worships the god of NATO, can be a serious test. If Clinton gets America into a war, America won't, says Oliver Stone.

Meanwhile, in Canada, Poland and Austria, there are voices for the restoration of normal relations with Russia and the lifting of sanctions. Losses incurred by farmers and big business from sanctions, as well as the problem of refugees, will hit the political career of German Chancellor Angela Merkel.

Thus, the political unity of not only Europe, but also the closest allies of the United States (like Canada) was a big question.

Ctrl Enter
Noticed oshЫbku Highlight text and press. Ctrl + Enter
We are
9 May in the center of Chisinau will host an exhibition of military equipment of NATOResults of the week. “Achtung! Achtung! Die russischen Panzerkampfwagen marschieren nach Kiew! ”
Military Reviewin Yandex News
Military Reviewin Google News
117 comments
Information
Dear reader, to leave comments on the publication, you must sign in.