April 4 2016
165
For the first time in Syria, the combat use of Russian Ka-52 "Alligator" helicopters was observed. We are talking about helicopters that were delivered to the SAR about two weeks ago. If you believe the information sources, then these rotary-wing machines operating in the Syrian Arab Republic, are now three. 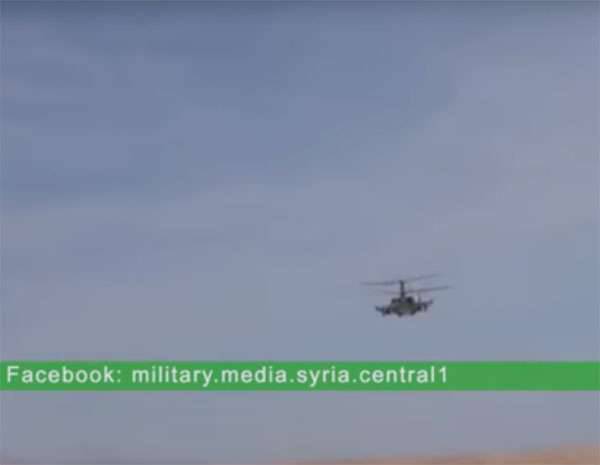 The Ka-52 helicopters were deployed to support the Syrian government army from the air in the area of ​​the settlements of Palmyra and El Qaryatane. Christian El Qaryatayn freed from militants LIH on the eve.

It is reported that this video was made precisely in the area of ​​El-Karyatayn, held igilovtsami from August last year.

Earlier there was information that Russian helicopters Mi-28H were also used in Syria, which provided assistance to Syrian troops in the Palmyra region.

Ka-52 helicopter gunships of the Russian Aerospace Forces launched a series of strikes against the accumulation of manpower of ISIS militants and their off-road vehicles equipped with heavy machine guns and anti-aircraft installations.

The helicopter is armed with air-to-ground and air-to-air guided missiles. In addition, the Ka-52 uses unguided rockets and small arms and cannon weapons.

Ctrl Enter
Noticed oshЫbku Highlight text and press. Ctrl + Enter
We are
Russian sappers on mine de-PalmyraAircraft of the VKS of the Russian Federation strike at the ISIL militants in the area of ​​El-Karyateyn, as well as on the border of the provinces of Rakka and Deir ez-Zor
Military Reviewin Yandex News
Military Reviewin Google News
165 comments
Information
Dear reader, to leave comments on the publication, you must sign in.