Ukrainian Chernobyl does not subside 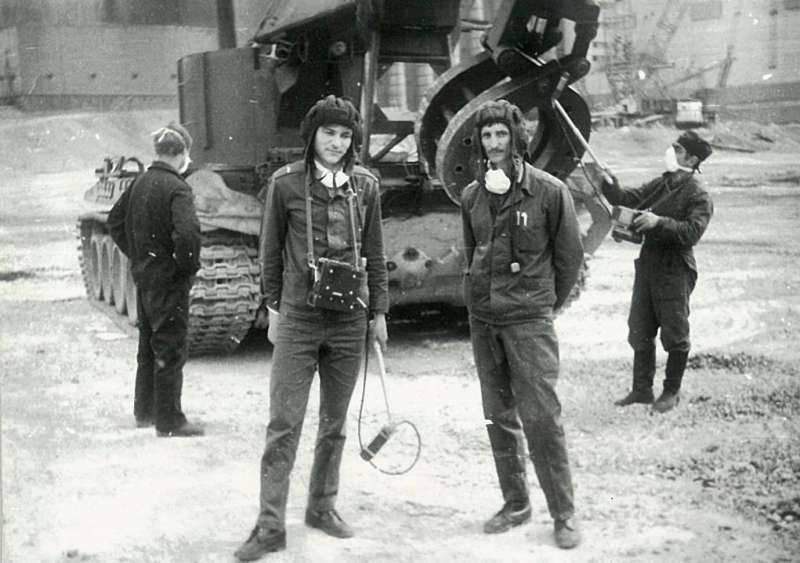 Almost 30 years ago the accident at the Chernobyl nuclear power plant. Will Ukraine celebrate this sad date is unknown. Ukraine has many stones, big and small, with which it is trying to defend itself from the whole world. And one of these “pebbles” is a nuclear one, hidden under the weight of the sarcophagus, like this very long-suffering country itself. Perhaps, politicians will raise some kind of “bug” on this wave - this is their habit. But thousands of people throughout the Soviet Union took part in eliminating this disaster, and thousands of people across Russia will remember 26 on April 1986. No matter what they say and what they do, the elimination of the accident became an example of the heroism of all public institutions - civil, military, scientific. According to the annex to the order of the Minister of Defense of the Russian Federation from 27 March 2003, No. 88, for four years 290 military units from all over the country were involved in Chernobyl. 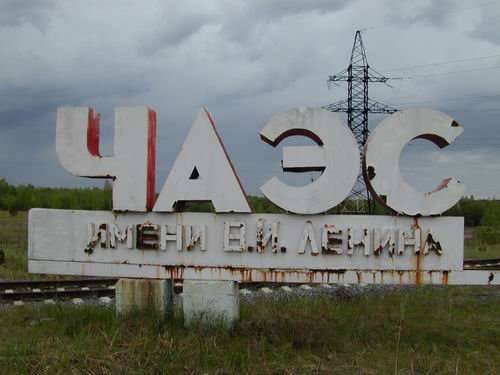 But today's Ukrainian government simply forgot the liquidators and stopped paying them pensions due to the law. At the end of March, desperate people tried to reach out to their power near the building of the highest government authority, but they were not heard. Also, the renewed Kiev does not want to implement in full the law concerning evacuated citizens. And when, finally, true justice will prevail, is unknown.

Not so long ago, information appeared on the Internet that the Ukrainian authorities ordered the use of canned military equipment infected during the Chernobyl disaster. In the DPR, a wrecked T-64 tank of the Soviet period was discovered, the radiation from which exceeded the permissible radiation level by 15 times. For example, starboard tank radiated more than 150 mcr / h. People who move on this technique - driver mechanics, unit commanders, gunners and others, receive a high dose of radiation. It is unlikely that the Ukrainian military will realize the horror of what is happening: recently, dosimeters have been seized for some reason from the first-aid kits of the Ukrainian army. True or not, let them figure it out for themselves.

We stayed the same история and the truth that many know. It is true about the courage of people. 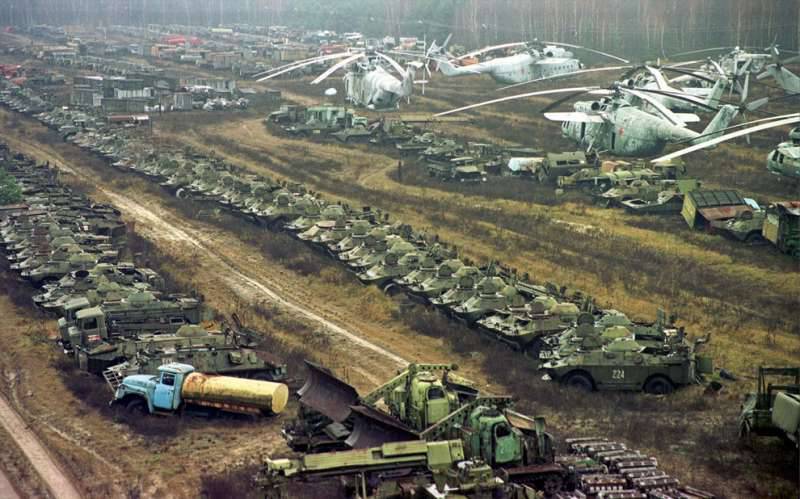 The first unit at the station was launched in the 1977 year. By 1986, it became the most powerful nuclear power plant in the European part of the Soviet Union.

On the night of April 26, on the 1 hour of the 23 hour of the morning, what was our pride became the address of our misfortune.

"Recently, we suffered a misfortune - the accident at the Chernobyl nuclear power plant," - said the chairman of the Supreme Soviet of the USSR, Mikhail Gorbachev, in a televised address to the Soviet people.

A special zone was defined - a circle with a radius of about 30 kilometers around the station. It was possible to go further only by special passes.

A government commission headed by the Deputy Chairman of the USSR Council of Ministers Boris Shcherbina has been established. From the first day earned operational headquarters with emergency powers. Everywhere technology, materials, and people were being transferred. More than 100000 people were evacuated from the cities of Pripyat and Chernobyl, as well as from villages and villages.

Radiation is a deadly, invisible enemy, penetrated through the armor into the human body and did its evil work. Radiation has neither color nor odor. It can be caught only by the counter cracking from tension.

On that terrible night in April, people passed here without armor. “The first contribution was made by firefighters who were able to localize the source of ignition, which could lead to very big troubles. But burning continued in the graphite of the reactor, radioactive aerosols were released, ”said member of the government commission, academician V.A. Legasov. “And therefore, the government commission in debates and disputes, feeling that it’s not possible to localize this accident using traditional methods that were prepared in advance at the station, began to come up with solutions that would solve the problem of localizing the fire source. A plan was developed to create a first protective barrier, based on the idea of ​​conducting an "attack" on the reactor from above. Were selected the appropriate composition of materials that would allow the evolved heat to take "for themselves" and create a powerful filter layer. "

So for the first time in the lexicon the word "sarcophagus" appeared. In the thickness of the reinforced concrete it was necessary to hide the destroyed body of the station.

“Experiments were conducted around the clock in the country's institutes that showed what materials should be used,” said the vice president of the USSR Academy of Sciences, Ye.P. Velikhov. “We tried to create the most favorable radiation environment for work and therefore we looked for ways that, on the one hand, would localize the accident and, on the other, would not endanger the people who worked.”

It was also decided to cool the fourth power unit with liquid nitrogen.

The accident is such that initially it was difficult to assess and predict its scope and nature. The Soviet scientists did not have a right to make a mistake.

The work shifts went on for minutes — the radiation fields were so high. 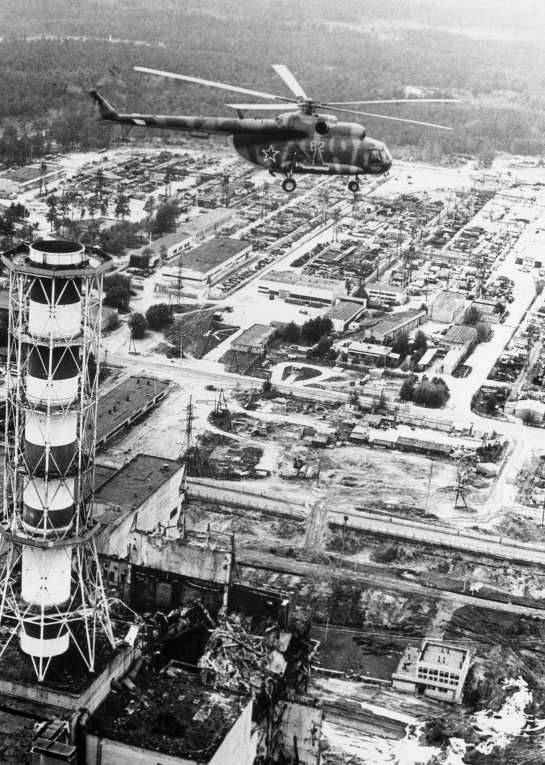 Helicopters dumped tons of cementing materials. There were fears that the foundation of the station could not stand: there were deposits of the most dangerous soils, sandstones. A tunnel was dug under the reactor hell into which concrete was allowed to enter. In the bottom, the temperature sometimes reached + 35 degrees. It was here that the Donetsk miners came in handy, who worked changing every three hours.

Only thanks to selfless, sacrificial work, the worst thing - a further fire - was prevented.

Simultaneously with these works, three concrete plants were laid on the waste ground in Chernobyl. The first launch period is ten days. Such long-term tasks were due to the fact that one of the most valuable materials — concrete — was brought from Vyzhgorod.

The new plant gave the first concrete 9 May. "Shipped concrete 124 042 cube. m, made 3 421 flights ", - such statistics hung on the board 20 May. According to known data, the construction of the Chernobyl "sarcophagus" took 400 thousand cubic meters of concrete mix and 7000 tons of steel structures. The construction was completed in the shortest possible time, in just 206 days. 90 of thousands of people took part in it. 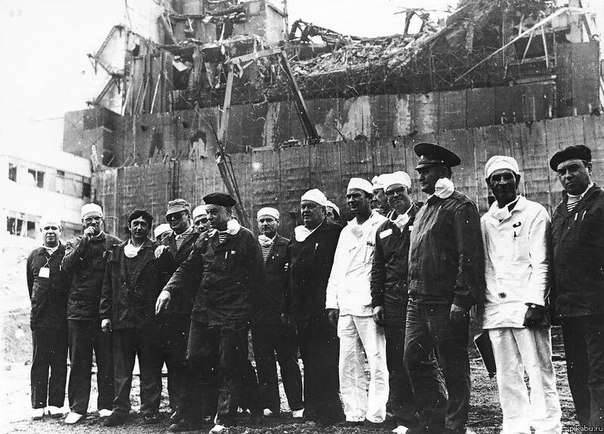 All those who were in the Chernobyl NPP area risked their health and life, fighting for the “invisible enemy” (radiation) to not spread further.

30 years have passed, but those seemingly short month and a half of work on the aftermath of the accident, a resident of the village of Volno-Donskoy, Viktor Aleksandrovich Mastenkov, will remember all his life. Victor Alexandrovich is from the Oryol region. My father worked as a miner, and the family moved frequently. The young man graduated from school in the village of East-Gornyatsky Belokalitvinsky district. In 1968, Victor was taken to the army. After serving three years and returning to the village, the young man falls in love with the beautiful Olga and, without thinking twice, makes her an offer. The head of the newly-minted family worked in the mine for some time, then became a chauffeur. The young family moved to the village of Volno-Donskoy of Morozovskiy district, where they settled to work in a collective farm: he was a driver, she was an agronomist and vegetable grower.

4 September 1986, Victor received a subpoena from the recruiting office for the passage of the commission. As a stock sergeant, he was sent to Ukraine to eliminate the consequences of the accident at the Chernobyl nuclear power plant.

- We recruited different specialists and workers according to certain criteria: age - 35-45 years, two children. At that moment my wife and I had already raised two sons. By all measures, I came up. The charges were quick: in the morning, the medical board, and in the evening, the dispatch, recalls Viktor Alexandrovich. - Of the thirty people that day, only four were sent: me, Yuri Ignatov (resident of the Morozovsky district) and two guys from the Milyutinsky district. We were transported to the city of Yellow Waters of the Dnipropetrovsk region. There, being in a barracks position, we waited for further instructions. Daily on the divorce announced lists of required professionals.

September 19 Viktor Aleksandrovich got to Chernobyl. The liquidators' barracks were located in the former boarding school. The first trip to the accident site took place on the night of the same day. Initially, the craftsmen and his comrades were engaged in assembling a crane, about 90 meters in height, it was intended to block the roof of the ill-fated fourth unit. 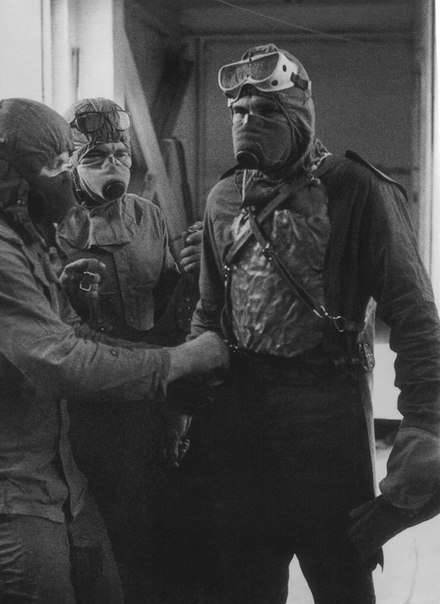 “We didn’t work long, 10-15 minutes, due to strong radioactivity,” recalls the liquidator. - Ten days later, drivers were needed, and I went to work by profession. Not far from Chernobyl, there was a concrete plant, from where we took concrete from the transshipment point on special machines to an exploding reactor. Poured "sarcophagus", the so-called object "Shelter". Everything that could not be decontaminated, all the garbage to the very top was poured with concrete. A lot of people worked: drivers, dispatchers, distributing cars in areas, operators working on special pumps, and many others. I witnessed the fall of the Mi-8 helicopter, which occurred on October 2 1986, and the death of a crew of four. Near the 4 unit of the helicopter, the blades of the helicopter caught on the crane cable. Tragedy left no one indifferent.

Work on the creation of the "sarcophagus" was continuous. Around the clock machines supplied concrete. Each driver had a dosimeter - a device for measuring exposure. There was a certain limit of radiation, over which a person was no longer allowed to work that day. All were under the strictest observation, kept a certain journal, noted the radiation dose. 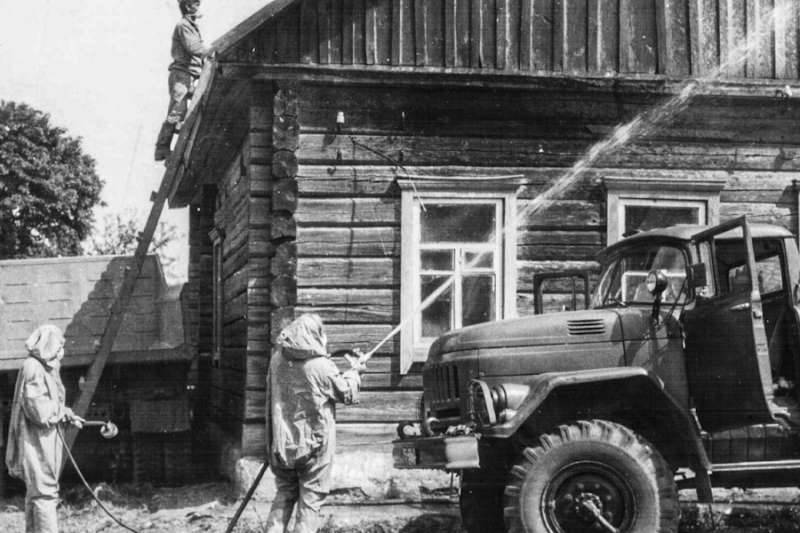 The machines were also under control, they were sent from time to time for decontamination, and if the transport was no longer workable, it was sent to the burial ground of a nuclear power plant. All overalls were disposable; they were also disposed of.

- Many of the guys who lived with us in the boarding school were nuclear power engineers. They advised not to walk without respiratory masks, explaining that radioactive dust that can get into the lungs with air is the worst thing, says Viktor Alexandrovich. - Therefore, despite the heat, I tried to stick to their advice, especially since there were enough masks.

After a month and a half, the driver-liquidator V.A. Skids, gaining the maximum dose of radiation, received a detour sheet and was sent home.

The consequences of the work at the site of the Chernobyl accident are irreversible, and the health of Viktor Aleksandrovich has deteriorated markedly. The loss of the ability to work and the burn of the respiratory tract became the price paid for good deeds. In the 2004 year V.A. Mastenkov was awarded the state award of the Russian Federation - the Order of Courage.

Victor Alexandrovich is now focusing his attention on his family. They with Olga Alekseevna brought up worthy sons - Alexey and Alexander.