Unmanned "Falcons" and air operations beyond the psychological factor 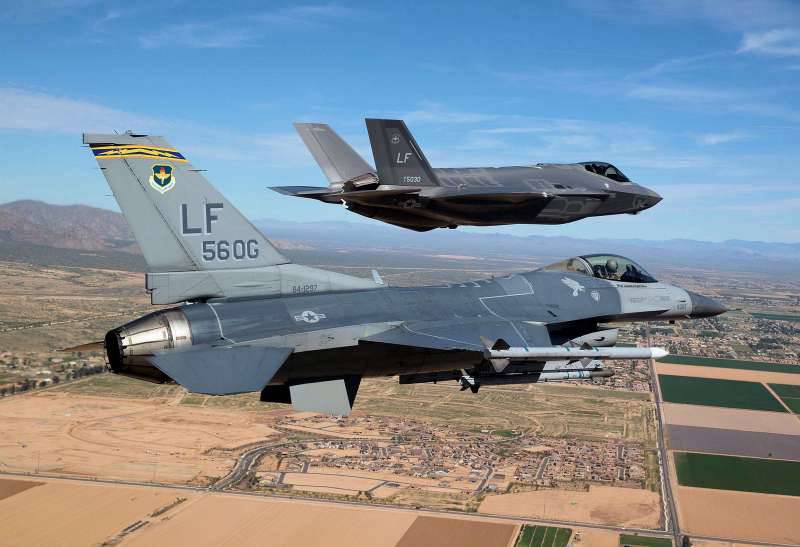 The appearance of a full-fledged unmanned aircraft complex 6-th generation, capable of performing the full range of combat missions solved today by pilots, can be expected no earlier than the end of the second half of the XXI century. The operational life of the F-35A / B / C alone was recently extended to 2070, not to mention such machines as the low-profile B-21 rocket carrier bomber developed under the LRS-B program. Approximately the same or even longer serve our T-50 PAK-FA, which are much newer and more perfect "Raptor" and "Lightning". But already today the most audacious attempts are being made to create advanced tactical drones based on the well-proven 4 generation multi-role fighter, the developments of which are already brought to life using the example of the network-centric linkage of on-board radioelectronic equipment (including the weapons control complex) of the MQ-9 UAV “Reaper / ER "with the equipment for the exchange of tactical information fighter F-35A. But due to the fact that these drones have a serious drawback for the operational performance of a combat mission jointly with supersonic fighters, the low maximum speed (up to 400 km / h), the specialists from the research laboratory of the US Air Force decided to resort to a very simple, at first glance, but effective concept.

Representatives of the laboratory reported plans to upgrade unmanned QF-16 target fighters under a single data exchange and control system with multi-purpose 5 generation fighters of the F-35 family, where QF-16 and other versions of the Falcon will act as slaves in the TVD fighters. According to the ambitious concept of "Loyal Wingman" (from English - "the faithful slave"), which has been wandering among the US military departments for about a decade, the entire information component, monitored by the onboard RLPK and various passive sensors of the slave machine, must in full and with all details transmitted over the radio communication on the lead board. Navigation information, the status of the avionics and power plant, as well as the visual situation around the slave should be displayed with the highest resolution on the multifunctional indicators and on-site control system of the pilot pilot, in this case the F-35. Such a tactical “bundle” includes several wide-angle high-resolution TV cameras on board the aircraft, located on the upper, lower, side, front and rear projections; We also do not forget about the ultra-secure coded radio carrier, through which this information will be transmitted to the pilot-operator. For example, in the coverage area of ​​the Krasuha-4 ground-based electronic warfare complex, the quality of communication between the master and the slave may decrease to a level where it may be impossible to continue an air operation. More or less normal communication between two aircraft in this case can be maintained at limited distances. The F-35 can use the centimeter-range MADL directional broadband radio channel as the only effective means of protecting against the enemy’s electronic countermeasures. But there is in the use of bundles "F-35 - upgraded QF-16" and many positive points.

First, it is the complete absence of any psychological factor that could affect the operation of the unmanned fighter. On a manned vehicle, everything is completely different: any, sometimes even insignificant, military incident can easily affect the psychological state of a pilot: the last queue of ZAK tracer 30-mm projectile traps in the night while simultaneously “squeaking” warning systems about receiving a “seizure” warning The enemy’s MRLS aircraft, forcing on a sharp maneuver, all these unforeseen moments are always a hindrance to the smooth execution of a combat mission. In the Loyal Wingman concept, an F-35 pilot who has converted his Lightning to a terrain following mode can adjust or control the flight of a QF-16 slave, as well as remotely control his armament in an online computer game mode, significantly less risking his own life . The only concern is the F-16, stuffed with tons of expensive high-precision weapons.

Secondly, this is a twofold increase in the combat load of a wide variety of missile and bomb weapons, which can be used not only for target designation of the slave F-16, but also for target designation of the leading F-35. And this is an additional advantage expressed in high target channel aviation Ligaments "Lightning II Falcon". The total combat load of two vehicles on a mission can reach 18500 kg, weapons will be placed at 19 suspension points of two aircraft. In addition, if the leading F-35A is lost, the F-16 will be able to go into autopilot mode, or under the control of another F-35A, which will save an air arsenal.

Thirdly, not only the upgraded version of the QF-16 target aircraft can be used as a slave aircraft, but also completely new modifications of the “4 ++” generation, among which may be the F-16C Block 60. An AN / APG-80 AFNAR radar mounted on it, consisting of 1000 RMS, can detect a fighter target (EPR 3 sq. M) at a distance of 150 km, track airborne 20 and fire AIM-120C- missiles at the passage 7 / 8 to 8 air targets. AFAR allows accurate mapping of the terrain and the detection and destruction of small ground targets in low-altitude flight mode.

You can summarize one thing: the combined use of low-profile multipurpose F-35A fighter jets with various F-16C unmanned versions will dramatically increase the combat effectiveness of the fighter squadrons of the United States Air Force. The work of the machines in tandem will raise the combat stability of the F-35A during the suppression of the enemy’s air defense, or during an air strike on point targets protected by various modern air defense systems. Attacking "HARM" slave F-16С can fire ground anti-aircraft weapons in a sharp "jump" from a low-altitude flight, and loaded with flying AGM-88 MRLS ground-based air defense missile systems may not have time to react to the leading F-35A approaching from an unexpected direction, which will drop several more units The WTO, for example, is a precision planning bomb GBU-39SDB. For an anti-aircraft missile system with semi-active radar guidance and one multifunctional radar of illumination, such tactics can have "unpleasant" consequences (C-300PS, etc.); I will clarify: only if it is applied only against one division with one RPN 30Н6, with the participation of full-fledged air defense missile systems in the 4-6 divisions, “hacking” C-300PS will be much more difficult.

There is another tricky tactic of the US Air Force, which they can use in the joint actions of F-35A and F-16C - the use of the MALD-J lure rocket, which is able to mimic the effective surface / area of ​​dispersion of many tactical aircraft and WTO aircraft . This false target can create enormous difficulties for the selection of real missile-dangerous air objects by ground-based radars of air defense systems, as well as “overload” the carrying capacity of the multi-function radar of the anti-aircraft missile system, which can lead to the defeat of the latter.

The only visible response is the creation and adoption of more productive anti-aircraft missile systems with excellent all-round firing capabilities not only at the system level, but also at the divisional level, with which the next offspring of the Concern VKO Almaz-Antey - the air defense missile system C-350 "Vityaz".