April 4 2016
29
Last week, German Foreign Minister Frank-Walter Steinmeier, who is currently chairing the Organization for Security and Cooperation in Europe (OSCE), made a three-day trip to the countries of Central Asia. He consistently visited Uzbekistan, Kyrgyzstan and Tajikistan. The trip was announced as an OSCE event. Steinmeier intended to discuss with the leaders of the states the role of this organization in the region, to visit its institutions. 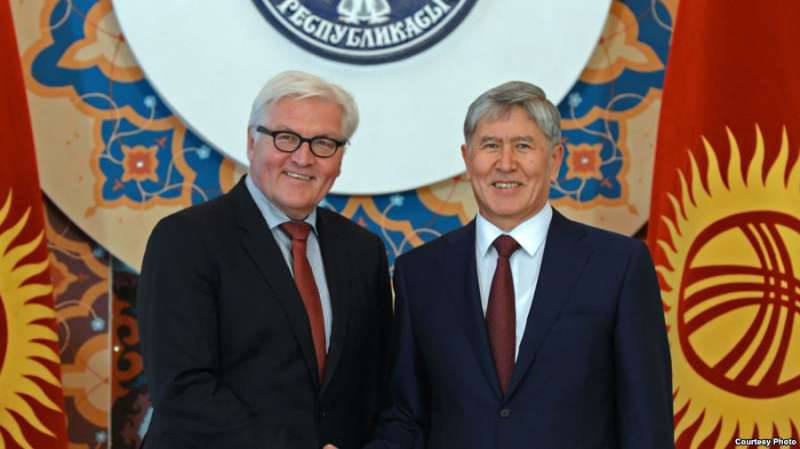 Delicate Germans and their insistent policies

In fact, the German minister was accompanied on a trip by a delegation of representatives of German business, members of the Bundestag, cultural figures, and the main topic of the talks was bilateral relations.

However, this does not contradict the so-called “Central Asian strategy” of the European Union, announced at the initiative of Germany as early as 2007 year and edited and corrected by German diplomats last summer. At the heart of this strategy is the assistance of the European Union in the development of bilateral relations with the countries of the region. Germany is primarily interested in them. It has an export-oriented economy with a high demand for raw materials and energy carriers, the diversification of deliveries of which worries German industrialists. No wonder they accompanied the minister on this trip.

At the same time, the route of Steinmeier passed by Turkmenistan and Kazakhstan, which is precisely the source of energy resources that Germany needs. German diplomats explained this with special relations with Turkmenistan, whose interests are oriented to the markets of China and the countries of South-East Asia. And in Kazakhstan, during the preparation of the visit of the German minister, there was an election campaign, and the delicate Germans did not want to influence its outcome.

About the delicacy of the diplomats obviously went over. Germany has long and aggressively sought to convert its economic success into geopolitical influence in order to get into the closed club of the permanent members of the UN Security Council. Last fall, for example, Frank-Walter Steinmeier unexpectedly made a voyage to the countries of the Middle East, tried to have his say in resolving the most acute conflict in the world. However, the German minister did not succeed on that trip. He was only politely listened to by the leaders of Iran, Saudi Arabia, Jordan, focused on very different centers of power.

Last year, Germany signed a partnership agreement with Kazakhstan. As acknowledged by German diplomats, bilateral German-Kazakh relations are now "at a very reliable and stable level." Therefore, the visit of Steinmeier to Astana seems to be not so important. In the German Foreign Ministry, they somehow ignored that while the head of their department posed for reporters at a meeting with the leader of Tajikistan, President Nursultan Nazarbayev of Kazakhstan was photographed in Washington with Barack Obama at a forum on nuclear security. Such a demonstration of the priorities of the Kazakh leader was clearly not in favor of the German minister, and the Germans would prefer to keep silent about this disruption of the meeting in Astana.

They did not begin to strongly pedal in Berlin and the development of economic relations with the states that entered Steinmeier’s route. Then participation in the delegation of representatives of German business would very much resemble political tourism. In fact, for all the post-Soviet years, the countries of Central Asia have not succeeded in trade with Germany. Even Uzbek exports amount to only one and a half tens of millions of euros per year. German products in the Uzbek market more - within 200 million euros. For the nearly four-trillionth German housekeeper, this is not even a drop in the ocean. What to say about the Kyrgyz and Tajik, together under-up to a third of the Uzbek volume. Kazakhstan compared to its neighbors looks very solid. Its trade with Germany is approaching 4 billion euros, but Steinmeier did not go to Astana.

How Germany forms its sphere of influence in post-Soviet Asia

Experts give very different reasons for the visit of the head of the German Foreign Ministry to Central Asia. Thus, Sebastian Schick, an expert on Central Asian countries of the Berlin Fund for Science and Politics, notes that “Central Asia for Germany is not only one of the sales markets and sources of raw materials, but also a potential transit zone to China, which plans to build a kind of new here” Great Silk Road "to Europe". Germany has extensive trade and economic ties with China. Implementing them on a new project bypassing Russia seems to be very promising for Berlin.

But it's not only that. According to Sebastian Schick, Steinmeier’s visit is aimed at ensuring that the expansion of Germany’s cooperation with Central Asian countries helps them maintain a certain distance from Russia. In this regard, Schick recalled that “last year, US Secretary of State John Kerry made a tour of the countries of the region. Now here is Steinmeier. Such trips should not be underestimated. These are very visible, visible events. ”

We will add, by the way, that before the trip of Steymeyer to Central Asia, both politicians met in Moscow, where their paths crossed, and the Asian tour of the German minister ended with a regular meeting with the US Secretary of State.

What could Steinmeier Kerry tell about German affairs in the region? Unlike the Middle East, Germans have very productive projects in the countries of Central Asia. They were launched at the turn of the century, when German political education funds came to the region.

Here, for example, is the Hanns Seidel Foundation, which is close to the Bavarian Christian Social Union. He entered Central Asia in the 2002 year and began his work with the training of local government specialists. In Kyrgyzstan, the foundation works together with the Academy of Management under the President of the country. Over the years, over three thousand people have passed through his educational programs. Today, these people work in the office of the country's president, ministries and departments, and are headed by city administrations.

There is a good basis for such contacts. In Central Asia, there was a large diaspora of ethnic Germans. Many of them have now moved to Germany, but have maintained ties with the countries in which they were born and lived before. This helps the German foundations to promote their programs, often going far beyond the usual humanitarian goals and creating a “distance to Russia”.

Frank-Walter Steinmeier has not been in Central Asia for ten years. There are several reasons for this trip. The main one is aggravated relations between Russia and the West. To the sanctions pressure on the Russian Federation now decided to add problems in its relations with partners in the Eurasian Economic Union. Kyrgyzstan joined him last August. Tajikistan is preparing to take such a step.

Kyrgyzstan, among other things, is on the threshold of the next presidential election. The next head of state, Almazbek Atambayev, will hand over powers to another, newly elected president next year. It's time for the “delicate” Germans to make an audit of their capabilities in the region before such a responsible campaign. In short, podnakopilas tasks.

How they will be realized depends largely on Russia. After all, today it is the Russian Federation that is the main trade and political partner of the Central Asian states. Will they resist the temptation of European integration, a benign picture of which is painted by visiting German politicians and educational funds of influence within their jurisdiction? A question that today has no simple answer ...

Ctrl Enter
Noticed oshЫbku Highlight text and press. Ctrl + Enter
We are
The head of the DPR visited Gorlovka, the cadets took the oath, and in the "Olympic" hosted the forum "Donetsk Republic"Why Uzbeks and Tajiks do not take the world
Military Reviewin Yandex News
Military Reviewin Google News
29 comments
Information
Dear reader, to leave comments on the publication, you must sign in.