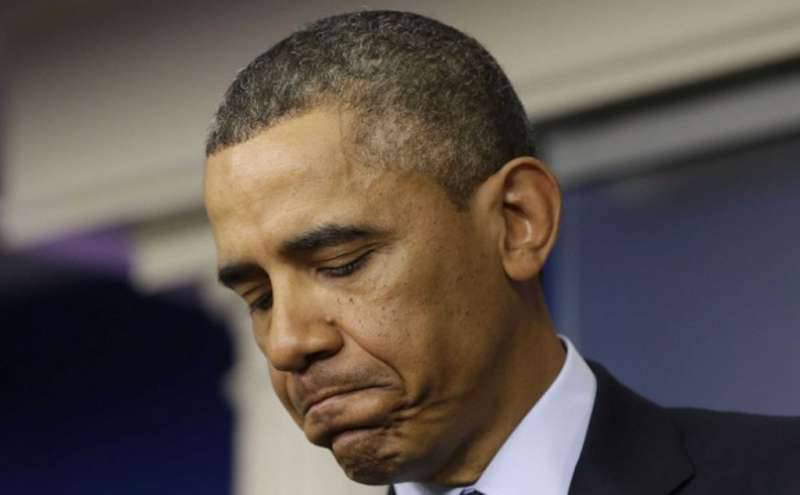 Having brought the situation in Ukraine to the point of absurdity, the United States suddenly agreed again to disarmament and nuclear security.

We literally last week talked about the possibility of international developments in this direction.

Speech now goes, of course, not only about the summit to which Russia has decided not to go, and thus of course humbled not so much the United States as President Obama. In the US, they are now increasingly seeing the difference between the president and his country. I would have somewhat expanded this moment and said that the gap between the regime in the United States and the voters is growing.

As a matter of fact, the United States prepared for this summit all year round and now when the democratic party needs “political” results, Russia decided not to go. The summit was part of the preparation plan for the elections and now this “pile” has collapsed into mud and the bridge has been twisted. Only one deed of Putin and all that was built before, now can be called a bridge to nowhere. The unfinished bridge hung and swung, threatening to collapse.

I must say that there is no doubt that there are fatal miscalculations by the US administration and no one else. Judge for yourself, you are preparing a summit and at the same time trying to defame your most important partner. Do you have the right to rely on a decent result, if you behave indecently? If the Obama administration expected that Putin would swallow it, it means that those people who formed the US administration do not behave professionally, that is, the “State Department” (as a symbol of incompetence), is now everywhere in the US administration. This has become completely clear during Obama’s term in power, and right there, comparing to Clinton, we understand that this would have happened to her.

That is, for several years now the Obama administration has been trying to spit on Russia, and when the time of the summit comes and the United States learns that Russia will not come, they roll out sheep's eyes and wonder: “How could this have happened!”. It is here that it turns out that to spit on Russia and to spit against the wind, these are events of the same order and the result on one’s own face. So, gentlemen from the State Department, wipe and think.

Presidential national security adviser Ben Rhodes said that Russia isolated itself, although most likely it looks like a kind of act of political disgust at the unscrupulousness of partners. In general, I must say that Mr. Rhodes was running around and trying to somehow smooth over the contradictions by shifting everything to the Ukrainian question and even said that it is because of this “Ukrainian question” that certain complications occur in the current issue of nuclear disarmament. Thus, Ben Rhodes acknowledged that the United States simply did not deserve respect.

Further irritation grew and in addition to the already pronounced “Russia isolated itself,” followed by a completely unthinkable accusation of non-compliance with the INF Treaty. However, the United States, as always, is unsubstantiated and resorts to a “drum policy,” when from large tribunes they shake the air with all sorts of statements completely ignoring the statement of opposite sides. This is not a winning position, because the Obama administration itself is stupid and stalls from its drum. Then the administration and politicians themselves are surprised: “Why do Russians see everything differently?”.

But there is nothing rhetorical. Russia's disarmament is a stumbling block for the spread of American power and economic expansion policies. The United States cannot deal with Russia exactly as it did with Yugoslavia precisely because of Russia's nuclear weapons. Previously, the West was in a blissful delusion, believing that “Russian armor tanks rusted through. " But if you recall the events in Georgia, when just a few days later, the Russian army broke the ridge of NATO adherents, the West realized that the rusty Russian tanks do their job perfectly, but the Georgian garrison drapes changing diapers on the go.

In Syria, as we know, everything also happened very quickly and very decisively. New types of weapons are working for the Russian authority much more than the infamous dragoon departure of NATO on strikers who look more like sparrows shot. Old junk rumbled across the Baltic countries, scaring the crows on the wires and returned to Germany. The shots that showed on TV showed all the wretchedness of the event. Some old farmer wearing a hat a la Gogol's “easter boy Rudy Panko” said that he had a walkie-talkie and he could contact his colleagues even in Latvia, even in Lithuania. Interestingly, do they know anything about the existence of Skype? And about the Internet?

In general, a pitiful sight. NATO spent 4 of the day on a dragoon trip. They even come to mind that the Russian “hussar” departure to the Baltic will happen in a few hours! They are in Germany, even the batteries in the radios do not have time to charge. But why is this Russia? At the same time, it must be said that in addition to Russian military equipment, the Pentagon is literally oppressed by Russia's logistics. Suddenly, within several hours, entire armies rise in alarm and get to the place of possible fighting in literally hours and minutes. This is the Pentagon and NATO will never master, even if you kill the wall! Putin correctly understands the size of his country and considers instant mobility to be the best indicator of high defense capability. At the same time, this is a huge wick for those who like to war up comfortably and cut down on this money.

Still, the summit in the United States is just an excuse. Obama would like to meet with Putin and talk with him, show the press a good relationship with Russia, this is now a big request to the United States. We see American interest in interacting with Russia. Remember, the Russians will soon begin to brush aside Kerry’s visits as if they were an annoying fly. Exactly the same was with Condoleezza Rice under Bush II, "Mad." So, we could not dismiss it either. Only vyprut, and she again runs down the ramp. Therefore, Putin decided instead of himself to send "the shadow of Hamlet's father", which is known to be worse than Hamlet and his father. The presence of the ambassador at such events is a kind of mocking and very sonorous slap in the face.

The result of all this is sad. The United States is forced to be in the company of a few god-gifted people like Poroshenko. This man is exactly offended by God. Well, judge for yourself. The United States is concerned that Russia agrees to disarmament, and in this case everything should be quiet, Russia should not feel the need for nuclear weapons, while Poroshenko does the opposite, calling on all the heavens to the Russian head. Who would agree to disarm? Or Poroshenko believes that Russia will be scared and disarm? If so, then whom Putin will be scared .. maybe Poroshenko?

As Aist says: “Idiocy is a bad adviser to politics, but he adds drive to it.” That's exactly the case. The administration of the current US regime uses high humanitarian ideas for its low attempts to raise the rating. Previously, much of this was possible and passed. These are old British bluff tricks, intimidation of the whole world and intractable partners. Now it does not pass and the west is actually close to panic. What to do with Russia? About pobombit and "do not remember stuttering!". Do not try to deceive - it is more expensive for yourself to be treated later. But you can’t leave anything like that either, otherwise pieces will soon begin to split off from the European Union. Moreover, this is a very interesting moment, they will repel from both the EU and the countries that want to exit. An example would be the situation in Greece and the UK. On the accession of "Square" very eloquently expressed the Netherlands. And then the Russians spat on the summit. In general, everything is bad. "Everything is mixed up in the Obama house."

Ctrl Enter
Noticed oshЫbku Highlight text and press. Ctrl + Enter
We are
A great interview with Sergey Lavrov: about Ukraine, Obama and IranWhat you didn't want to know about England
Military Reviewin Yandex News
Military Reviewin Google News
96 comments
Information
Dear reader, to leave comments on the publication, you must sign in.