April 2 2016
209
Twenty years ago, on April 2, 1996, took place historical event - the presidents of the Russian Federation and the Republic of Belarus Boris Yeltsin and Alexander Lukashenko signed an agreement on the creation of the Community of Russia and Belarus. Five years after the collapse of the Soviet Union, the political elites of the two states came to the conclusion that it was necessary to start integration processes in the post-Soviet space. Russia and Belarus, as the two culturally closest states and economically closely related states, developed close ties with each other even within the framework of the Commonwealth of Independent States (CIS), both in the economy, in culture, and in the military sphere. The idea of ​​creating the Union State belonged to the President of Belarus Alexander Grigorievich Lukashenko. It was he who at that time was the most consistent supporter of the integration of the two states.


When, in 1994, Mr. Lukashenko came to power in the sovereign Belarus, becoming its first president, he inherited a rapidly impoverished and unstable country. On the one hand, in Belarus, as well as in Ukraine, nationalistic sentiments, spurred by the West, grew. For many years, the Belarusian nationalists became the most important opponents of the rapprochement of Minsk with Moscow, while the Western media strenuously sought to present their activities as an example of opposition to opposition to the “Lukashenko dictatorship”. On the other hand, Alexander Lukashenko himself proved to be a consistent supporter of the revival of the Belarusian economy and the creation of a strong state, able to defend its interests and pursue an independent foreign and domestic policy. For the middle 1990-s. it was amazing - even then huge Russia was oriented towards the West, and the United States and the countries of Western Europe were called nothing but the most important partners. 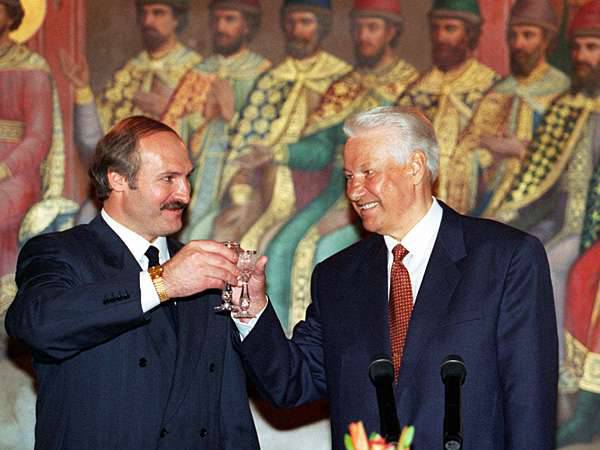 However, already in the middle of 1990's. began to outline some changes in the policy of the Russian state. 21 February The 1995 Treaty was concluded on friendship, good-neighborliness, and cooperation between Russia and Belarus. After its signing of 26 in May of 1995 in the Belarusian village of Rechka, which is on the border of the Vitebsk and Smolensk regions, the border pillar was solemnly dismantled, marking the border between the two states. It was a symbolic action that entailed further measures towards the integration of the two states. In the same 1995, the Treaty on the Customs Union was signed between Russia and Belarus. After that, the tariff legislation and the fiscal and monetary policies of the Russian and Belarusian states were unified, which facilitated further trade and economic cooperation between the countries. 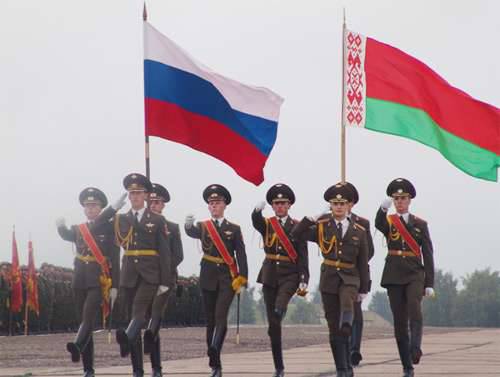 After signing the agreement on the creation of the Union of Russia and Belarus, work began to further strengthen the integration of the two states. First of all, the formation of the allied executive bodies and the federal budget began. The Union of Russia and Belarus has found its own Border and Customs Committees, the Security Committee. Each state - member of the Union, nevertheless, retains its own statehood, sovereignty, independence, territorial integrity. Russia and Belarus retained their own constitutions, emblems, state flags and other attributes of statehood, and their own armed forces. However, from this time on, every citizen of the Russian Federation and the Republic of Belarus is at the same time a citizen of the Union of Russia and Belarus. Hence the following rights of Union citizens: free movement and permanent residence within the territories of two states, the right to protection in those states where there are no representative offices of Russia or Belarus, from the diplomatic institutions of one of the members of the Union. Especially valuable was the granting of the right to free movement and residence of citizens of the countries - members of the Union on the territory of both states. This greatly facilitated business opportunities and labor migration, first of all from Belarus to the Russian Federation.

In addition, citizens of both countries were given the opportunity to occupy positions in the system of executive bodies of the Union. But the integration of the two countries was not limited to these measures either. The next step towards the unification of Russia and Belarus was the decision to begin preparations for the creation of a union state. At the beginning of 1999, the development of a draft treaty on the creation of a Union State began, and in early October 1999, the draft treaties on the creation of a Union State of Russia and Belarus were published in the official press of both states. The purpose of the publication was a nationwide discussion of the draft treaty. For a month and a half, about one and a half million people - citizens of Russia and Belarus took part in the discussion; 1300 comments and suggestions were made.

The creation of the Union State was perceived with enthusiasm by a significant part of the Russian and Belarusian society. This idea was supported, first of all, by the leftist-patriotic forces, who saw in the integration processes for the creation of the Union State a chance for the revival of the power of the Soviet power. In addition, the Union State objectively improved the positions of both the Russian and Belarusian economies. Russia and Belarus were given the opportunity of unhindered access to each other’s commodity and labor markets. Russian left patriots were impressed by the personality of President of Belarus Alexander Lukashenko, who looked charismatic and spectacular, especially against the background of the more elderly Boris Yeltsin, by the end of the 1990s. lost the support and sympathy of a large part of Russians. Many even preferred Alexander Lukashenko to be the head of state as a result of the further unification of Russia and Belarus.

The union state of Russia and Belarus was of interest to a number of other political subjects in the post-Soviet space. Thus, in 2001, Moldovan President Vladimir Voronin announced that he plans to organize the country's accession to the Union State, but over the next several years these plans remained unfulfilled. At 2005, Moldova announced its plans to become part of the European Union, which automatically signified a rejection of the prospective accession to the Union State. Separate Serbian politicians have also repeatedly declared the desired accession to the Union State, but no real action followed their words. The only states that actually took part in the integration processes were Abkhazia and South Ossetia. October 17 2008, the parliaments of Abkhazia and South Ossetia received the official status of permanent observers at the Parliamentary Assembly of the Union of Belarus and Russia

In 2000, integration processes gradually began to crack. First, the transition to the single currency of the Union State did not occur, although it was planned as early as 2004. Secondly, already in 2006, Russia raised the prices of gas exported to Belarus, and therefore Lukashenko complained about the desire Russia "absorb" the Belarusian state. But already in 2007-2008. integration processes have intensified again. From May 2008 to June 2012, the post of Chairman of the Council of Ministers of the Union State of Russia and Belarus was held by the head of the Russian government, Vladimir Putin. However, in the 2010-ies. integration processes have been slowed down repeatedly, and contradictions have been growing between the two countries. First of all, they were associated with the tightening of requirements for products imported from Belarus. In addition, after the start of the 2013-2014 events. in Ukraine, Alexander Lukashenko, contrary to the expectations of Russia, did not take an openly pro-Russian position. He preferred to maintain neutrality, acting as a kind of arbiter between the Russian and Ukrainian sides.

Nevertheless, both Russia and Belarus remain the closest political, economic and military allies. The consequences of the creation of a union of the two countries twenty years ago are positively assessed by both Russian and Belarusian statesmen. Thus, the Prime Minister of Belarus Andrei Kobyakov in an interview with “RIA News"Called the creation of the Union State the most ambitious political integration event in the post-Soviet space. It was the creation of the Union of Russia and Belarus that gave impetus to the emergence of other integration structures in the post-Soviet space, such as the Customs Union, the Common Economic Space, the Eurasian Economic Union. It was in the Union of Russia and Belarus that the mechanisms of customs and economic integration that were very popular in the later integration projects in the post-Soviet space were tested. So, the Eurasian Economic Union largely inherits the principles that were laid down by the Union State. First of all, this refers to the customs relations of its member states, to the creation of the most favorable economic treatment for the countries - members of the Eurasian Economic Community. Despite all the difficulties that for understandable reasons - after all, every sovereign state, whether Russia or Belarus, also has its own economic interests, arises in relations between the two countries, the importance of such a structure as the Union of Russia and Belarus can hardly be overestimated.

Ctrl Enter
Noticed oshЫbku Highlight text and press. Ctrl + Enter
We are
Is there a future for the CIS? Anniversary Summit in BishkekCommander Lukashenko and his army
Military Reviewin Yandex News
Military Reviewin Google News
209 comments
Information
Dear reader, to leave comments on the publication, you must sign in.