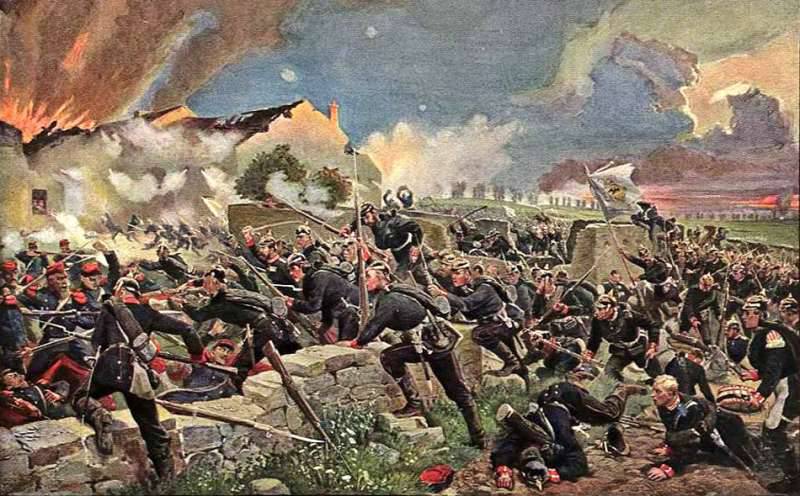 After the 6 defeats of August 1870, the troops of the Rhineland army began a retreat in the direction of Verdun and Chalon on Marne, in the area of ​​which the French command intended to form a new, so-called Chalons army. Already on August 5, after the first defeat of the French troops at Weisenburg, Emperor Napoleon III appointed Marshal Bazin commander of the 2, 3 and 5 corps, which formed the left wing of the Rhine Army. 12 August Bazin was appointed commander-in-chief of the entire Rhineland army, instead of Napoleon III. But Napoleon continued to remain with the troops, as he could not return to Paris without winning. 13 August Bazin gave the order to retreat to the west.


Marshal MacMahon moved to Chalon. There, General Trochus arranged the newly formed 12 Corps, and behind this assembly point the troops of the 7 Corps from Alsace were taken by train through Bar-sur-Au and Paris to Reims. Thus, by August 22, the reserve Chalon army was formed from four corps and two cavalry divisions under the command of Marshal MacMahon. She was supposed to reinforce the Bazen Army of the Rhine, which they also planned to take back.

However, the movement of French troops to Verdun and Chalon was detained by 14 August 1870 by the Germans, when a significant part of the army had already crossed over to the left bank of the Moselle. Initially, the 3 troops of the German army were waiting for new battles on the other side of the Vosges. The location of the defeated enemy and even the direction of his retreat were not known. It was possible to cross the mountains only in separate columns, so the offensive was carried out with great care, with short passages. Thus, the direct distance from Reichshofen to the Saar was just 6 miles, but this river was reached only in 5 days. The French were found only in small fortresses that covered the main mountain paths. Some of them went around, others took or laid siege.

The left wing of the German forces no longer had an enemy in front of it, so the Prussian command decided to pull the 3 army closer to the center. In order to level out all three armies, it took a step to the right, but since the 3 Army reached the Saar only on August 12, it was necessary to slow the advance of the 1 and 2 armies.

The German cavalry intelligence, advanced far forward, reported on the general retreat of the French army. German intelligence reached Metz and on both sides of it for the Moselle. All the cavalry reports confirmed that the main forces of the French army were ahead of Metz. As a result, the French army could either continue the retreat, or go on the offensive by the main forces, against the right-wing German wing. Therefore, the Prussian command instructed both of the right-flank corps of the 2 Army to stop near Metz, south of it, so that in the event of a possible offensive by the French army, it should act in the flank. On the contrary, if the French had turned against these two corps, the 1 Army should have launched a similar offensive. The rest of the 2 Army Corps, further south, continued their march to cross the Moselle. If on the other side of the river they were attacked by the superior forces of the French, they could, in extreme cases, move aside the 3 Army.

Thus, both sides did not plan to launch a decisive battle. The French thought to retreat to Chalon. And the Prussian troops gradually moved forward, not knowing whether the French would fight, rushing to a decisive attack, or retreat. Part of the Prussian generals believed that the French were already broken and were fleeing and that they needed to be planted immediately in order to prevent them from leaving without a loss. As a result, the confrontation began with clashes, which soon turned into a battle.

On the morning of August 14, according to orders given on the eve of Marshal Bazin, the 6, 2 and 4 French corps began to retreat from both flanks. The 3 Corps was to remain in its position beyond the deep valley of the Colombay Stream and cover the waste. At 15 hours, these three corps (with the exception of the Grenier division) were already on the left bank of the Moselle, when the first cannon shots came from the direction of Mets.

When the Prussians began to receive information about the withdrawal of the enemy, the commander of the Prussian 26 Infantry Brigade from the 13 Division, Major General von der Goltz, made an independent decision to go ahead and advanced with the vanguard to slow down the French retreat as far as possible. To the 1 Corps and the 1 Cavalry Division, he sent a request to support him in the offensive. Prussian troops energetically attacked the enemy and beat off Colombay and Aubigny on his right flank. By 17 the clock was busy and the village of La Planche.

However, the French, at the sound of battle, turned back. General Lamiro ordered the 1 and 3 divisions of the 4 corps back to reinforce the troops on the right bank of the Moselle. For his part, General Manteuffel, notified by von der Goltz, moved the 1 corps forward. A stubborn battle ensued. The weak detachment of Goltz, who held a separate position with Colombey, only with great difficulty retained it. However, the avant-garde of the 1 corps had already approached, and from the east General Osten-Sacken was in a hurry to help out with the 25 brigade of the 13 division. As a result, the battle broke out all over the line Kolombey - Nuil'i. In 18 hours, the Prussian infantry managed to cross the Colombei Valley at Lavalle and La Planchet under cover of the 60 summary battery of guns. By this time, the commander of the Prussian 12 Corps, General Kastrov, had arrived on the battlefield.

Tsastrov, taking into account the orders of the High Command, did not dare to launch a decisive offensive in the direction of Metz. However, just in case, he ordered the 14 Infantry Division and corps artillery to follow to the battlefield. Meanwhile, General Osten-Sacken with the 25 Brigade goes over the Quansi dell and rises to the edge of the plateau. Pine grove on the road to Belcroix, swept from three sides, is taken by storm. She goes from hand to hand several times.

With the advent of the 25 Infantry Brigade on the left flank of the Prussians, the advantage was in favor of the German troops. The French position on the road from Colombey to Belcroix, which the French still held steadfastly, was finally taken. The French retreated to Bourney, but still continued to cling north of the Saarbrücken road. With this success, the battle on the right flank of the French 7 Corps and the left Prussian 1 Corps has essentially ended. From this position, Prussian forces attempted to break through further, to the knot of roads near Belcroix, but their attacks were repelled. The repeated counterattacks of the French troops with the aim of recovering the space they had lost were just as fruitless.

On the left flank of the French, Grenier’s division from the 4 Corps, under the onslaught of the von Glümer division, fell under the protection of Fort Saint-Julien. The arrival of the French 3 and 1 divisions of the 4 Corps caused the battle to boil with a new force. The right flank of the Manteuffel corps was forced to withdraw and take up defense under the cover of corps artillery. The arrival on the battlefield of the 28 Infantry Brigade, 18 Infantry and 1 Cavalry Divisions caused Prussian troops to attack again. They took the village of May, but could not get through to Belcroix. By 21, the fight had stopped all along the line.

The French lost more than 7 thousand people in this battle, Prussian casualties lost more than 6 thousand people. Without bringing victory to either one or the other side, this battle for the whole day delayed the crossing of the French troops through the Moselle. This forced delay in the course of further hostilities led to grave consequences for the French army. Therefore, strategically, it was a victory for the Prussian army.

The peculiarity of this battle is that it had an improvised character. The reconnaissance of one Prussian brigade led to a fierce battle of very significant forces. The Prussian army was noted for the principle of mutual support: the Prussians, hearing shots in the vanguards, were mostly on the battlefield on their own initiative. In addition, the Germans skillfully used artillery, quickly concentrating guns. The combined 60-gun, and then the 90-gun battery allowed the Prussian weak forces to hold out until reinforcements arrived and contributed to their infantry.

The French command was extremely sluggish and indecisive. Bazin did not take advantage of the fragmentation of the Prussian avant-gardes, which could not be immediately supported by the main forces. The French did not use the recurring crises that could lead to the defeat of the Prussian advanced forces, if the French had attacked with concentrated forces. Thus, in the center, where the attack of one brigade of von der Goltz was directed, stood the French 3 corps in full force in a position adapted to the defense, and in its rear was a guard.

Thus, this battle had important strategic implications. Bazin’s army was unable to withdraw to Verdun in time. This allowed Prussian troops to first stop the French, and then force them to retreat to Metz. This is largely the fault of Bazin, who was guided by personal interests, which became clearer later, and sought to keep his army untouched until the conclusion of peace and therefore deliberately hesitated. Bazin planned to play an important political role in the future of France. 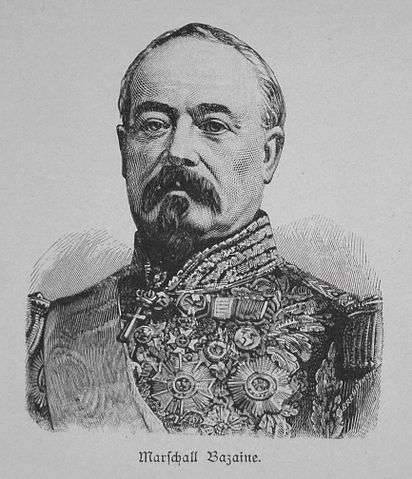 Author:
Alexander Samsonov
Articles from this series:
The collapse of the Second Empire

Ctrl Enter
Noticed oshЫbku Highlight text and press. Ctrl + Enter
We are
McMahon's army on the road to disasterBattle of Bar-sur-Aube
Military Reviewin Yandex News
Military Reviewin Google News
6 comments
Information
Dear reader, to leave comments on the publication, you must sign in.