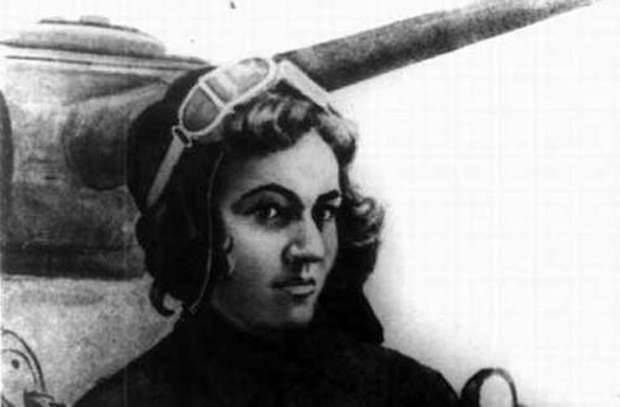 "Russian Planet" recalls a resident of Tomsk, who bought a tank for the front and became the first woman to be a driver tank

Danish director Gert Friborg visited Tomsk, where he shot some scenes for his short film “Fighting Girlfriend” - a biographical tape about the life of Maria October Oktyabrskaya. Most of the material was prepared in the director's homeland, but it was decided to shoot some scenes in the city, which is closely intertwined with the fate of the main character. History outstanding woman awarded the title Hero of the Soviet Union, in the material "Russian Planet".

Maria Garagulya was born in Tavricheskaya province (Crimea) on August 16 1905 of the year * in the village of Kiyat, now renamed the village of Blizhny. She grew up in a family of peasants who were deported to the Urals after dispossession in 1930. Primary education, six classes, Maria received in the city of Dzhankoy in the south of Crimea, where she moved to 1921 year. From there, four years later, she moved to Sevastopol. She managed to work at the cannery there, then was a telephone operator at a local telephone exchange.

In Sevastopol, Maria met her future husband, cadet Ilya Ryadnenko, whom she married in 1925. During the marriage, she both changed their last name, becoming the October. After graduating from college, Ilya Oktyabrsky was sent from one city to another, and Maria followed it.

According to Galina Bitko, who runs the cultural and educational department of the Tomsk Regional Museum of Local Lore, few personal belongings that belonged to Maria Oktyabrskaya have survived to this day. Memories, notes and memoirs of fellow soldiers and contemporaries have been preserved. They all speak with equal warmth of Maria Vasilyevna's pre-war life.

“Cheerful, cheerful, friendly and beautifully dressed, she always attracted people to herself. She organized an embroidery circle for the wives of commanders. The real needlewoman is real, - the participant of the Great Patriotic War Irina Levchenko told about a woman so. “Thanks to Maria Vasilyevna’s concerns, the soldiers’ barracks took on a cozy, homely look. There were curtains on windows and doors, embroidered with a cross and a satin stitch, napkins on bedside tables. And the flowers, if not in vases - in banks, but still alive. "

To all the questions about how she does everything, Maria proudly answered: “The commissioner's wife should set an example in everything!” She was constantly elected to the women's council of the units and garrisons to which Maria followed her husband. She was an active participant and organizer of defense and cultural events among the families of officers, as well as in amateur art activities.

After completing the courses of medical service, she learned the shooting business and graduated from the chauffeur courses. It is also known that from 50 rifle shots she got into 48 targets, threw a grenade well, pushed the core and threw a disk. Ilya Oktyabrsky was proud of his beloved wife.

In 1941, their fate divorced. A day after the start of the war, Maria, along with other family members of the officers, was evacuated to Tomsk, where she could arrive only in August. At the new site, she immediately began working at a local construction site, and then at the Leningrad Technical School of Anti-aircraft Artillery, also evacuated to Tomsk. At the end of the summer, she learned about the death of her husband. Ilya Oktyabrsky died on August 9 near Kiev.

Buying a tank and writing to the leader

Maria Oktyabrskaya went to Novosibirsk to meet with the wives of the officers who died in the war. After that, she decided to join the Red Army. By that time, she was almost 40 years old, and therefore she received letters of refusal to request to send her to the front.

She was prevented from getting into operation and cervical vertebra tuberculosis, which Maria Vasilyevna had once been ill with.

Then the widow of the Commissioner of October began to save money on the tank. For a start, with the help of her sister, she sold all the property that she had accumulated by that time. After that, she took up embroidery, as the necessary funds from the sale of belongings could not be obtained. When the entire amount - 50 thousand rubles - was on hand, she transferred the money to the State Bank. And she wrote a telegram to Joseph Stalin, which was published in March 1943 by the Krasnoye Znamya newspaper. In her address to the Supreme Commander, Maria asked to build a tank for her personal savings, and to send her along with him to the front as a driver. In the same newspaper was published the answer of the Leader of the peoples:

“Thank you, Maria Vasilyevna, for your concern for the armored forces of the Red Army. Your wish will be fulfilled. Accept my greetings, I. Stalin. "

As an October mechanic and requested, the tank was called "Fighting Girlfriend." While he was being collected, Maria was sent to study in Omsk, where she had to learn to drive. As Galina Bitko notes, she passed all the exams as “excellent”. After that I went to the Urals and got the car straight off the assembly line. 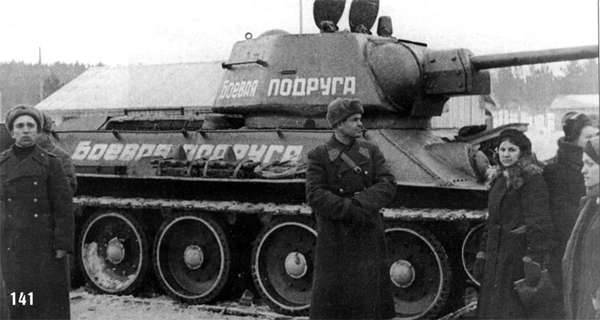 Tank T-34 “Fighting Girlfriend” at the time of its transfer to the crew by the team of the Sverdlovsk bread and pasta factory, the winter of 1943. Photo: tankfront.ru
After that, Maria Oktyabrskaya was sent to the Western Front, near Smolensk. There she joined the 26-th Elninskaya Guards Tank Brigade with the tank. In mid-September 1943, the tank "Fighting Girlfriend" arrived in Tatsinsky corps. The crew of the tank is also known: the commander is junior lieutenant Peter Chebotko, the gunner is Gennady Yasko, the radio operator is Mikhail Galkin, the driver is Maria Oktyabrskaya. At the same time, all crew members are front-line soldiers awarded with orders and medals. According to the employee of the museum, the crew of the tank called the mechanic only “Mama Vasilyevna”, to which she always answered them - “sons”.

The death of "Fighting girlfriend"

It is well known about the two battles of the members of the crew of “Fighting Girlfriend” and Maria Oktyabrskaya. One of the combat missions in November 1943 of the year was the need to cut the railway line near the village of Novoe Selo in the Senno district of the Vitebsk region of the Republic of Belarus. Complicated the task of the accumulation of enemy troops, whose troops were necessary to break, to perform the task. October, which at that time had already become a guard sergeant, along with her tank was among the first to be in the German positions.

For three days, Maria, seriously wounded, repaired her “Fighting Girlfriend”, which she shot down during the battle. Before failing, the tank managed to destroy more than 50 German soldiers and officers, as well as destroy the enemy cannon. After October was able to repair the tank, the entire crew returned to the location of the unit. For this battle, the woman received the Order of the Patriotic War, I degree.

The second famous battle in the biography of the heroine of the war took place in the area of ​​the Krynka station of the Vitebsk region. In mid-January 1944, a tank attack on the train station began. Among the attackers was the “Fighting Friend”, which crushed several anti-tank guns located in the village with its caterpillars. During the battle, the enemy shell hit the tank's "sloth" - one of the steering wheels of the combat vehicle. Due to damage, the equipment got up, and Maria, despite fierce shooting, went outside for repair.

When almost everything was ready, a mine exploded near Maria Oktyabrskaya. Several fragments wounded her in the head. Nevertheless, she was able to put the tank on the course this time too. After she returned to the unit, the first operation was performed in the field hospital, during which it became clear that more serious surgical intervention was necessary.

During Maria Oktyabrskaya's stay at the hospital, she was awarded the Order for the battle near Novy Selo. During the presentation was attended by the entire composition of the "Fighting girlfriend." Then, on February 16, the driver was taken to Smolensk by plane. She spent almost a month in the hospital, but the doctors could not help her, and 15 March 1944, Maria Oktyabrskaya, passed away. In early August of the same year, by decree of Joseph Stalin, she was posthumously awarded the title Hero of the Soviet Union.

As a result, the crew of the tank was replaced by three wrecked and burned down cars during the war. On the fourth machine, they managed to end the war, reaching Konigsberg. As a sign of respect and memory of Maria Oktyabrskaya, on each new tank received instead of the burnt down, the crew deduced the name of the very first tank - “Fighting friend”.

Tomsk citizens honor the memory of the heroine. So, for example, a memorial plaque is installed on the wall of the case of the electrolamp plant, with the following text: “At this place stood the house in which 1941 – 1943 lived in the year Maria Oktyabrskaya — Hero of the Soviet Union, sergeant, tank mechanic“ Fighting friend ”, built on her personal savings. Died in the battles for the Motherland in 1944 year. " In addition, a monument was erected near the gymnasium No. 24. Contrary to some opinions, Tomsk street Oktyabrskaya is not related to heroin. But in honor of Mary is named one of the streets of Smolensk.

* Date of birth indicated on award documents. Some sources indicate the date of birth as July 21 1902 of the year.