How many "Apaches" will eat an "Alligator"? 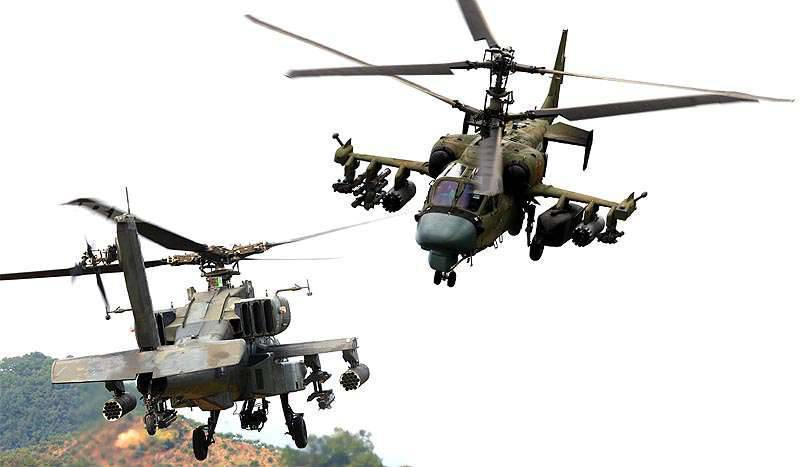 Initially, attack helicopters were created to support the Ground Forces. They ensured superiority over the enemy on the battlefield. Using its impressive arsenal and advanced detection systems, the helicopter sees everything and rapidly acts on introductory of any level of complexity. Destroys the manpower and armored vehicles of the enemy, or coordinates its combat operations - there are no impossible tasks for the attack helicopter.

The American AN-64 "Apache" and the Russian Ka-52 "Alligator" are the most famous "personalities" in their family. Their competitors from other countries simply have no chance to fight them. Let's understand who is “cooler”. 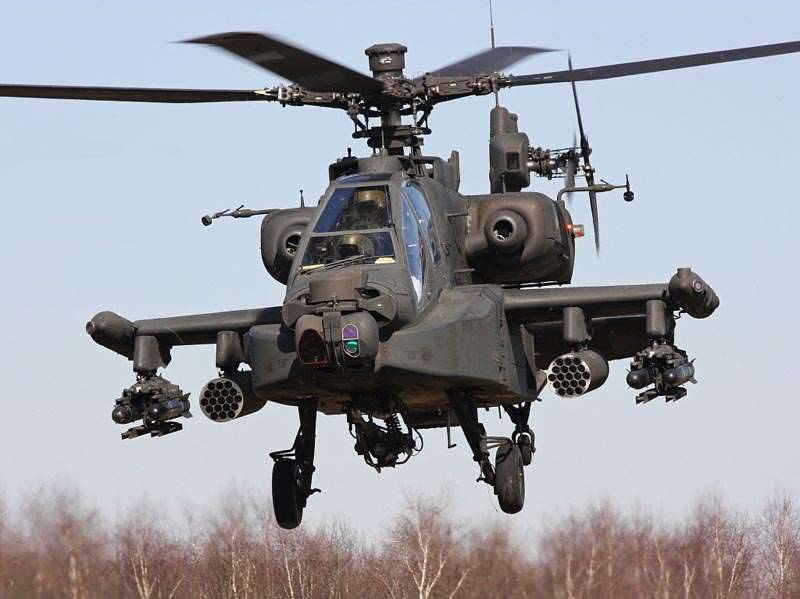 The American helicopter at one time made a real breakthrough in the field of helicopter engineering. Back in the 70s of the last century, the Pentagon already saw in its ranks not just a helicopter with a pair of guns, but a promising fire support vehicle. Requests are relevant: in the conditions of active counteraction of air defense and electronic warfare at any time of the day and in any weather, Apache should open enemy Tankslike can opener tin cans.

The helicopter body is made of high-strength materials, but they are only on paper. The Apache has a tandem arrangement of the seats, where the pilot-gunner sits first, and the pilot himself is slightly higher (for a better view). The cockpit is reinforced with Kevlar and polyacrylate in order to increase survivability. If we take the “non-show-off characteristics”, then the cruise speed of the Apache is equal to 293 km / h, flight range - 480 km, carrying capacity - 770 kg.

The four suspension hubs under short wings can fit a rather impressive arsenal: up to 16 anti-tank Hellfire missiles (the ones that embody the principle of “fired and forgotten”); blocks of unguided rockets; M230EX1 “Chain Gan” cannons, and a couple of “Stingers” on the sides for air battles. Under the cab is a built-in unit with a movable 20-mm automatic gun.

Now in service with the United States is a modification of the Apache Longbow. It is distinguished from the former by a powerful radar located above the main rotor hub, and improved avionics. On this, in fact, everything. 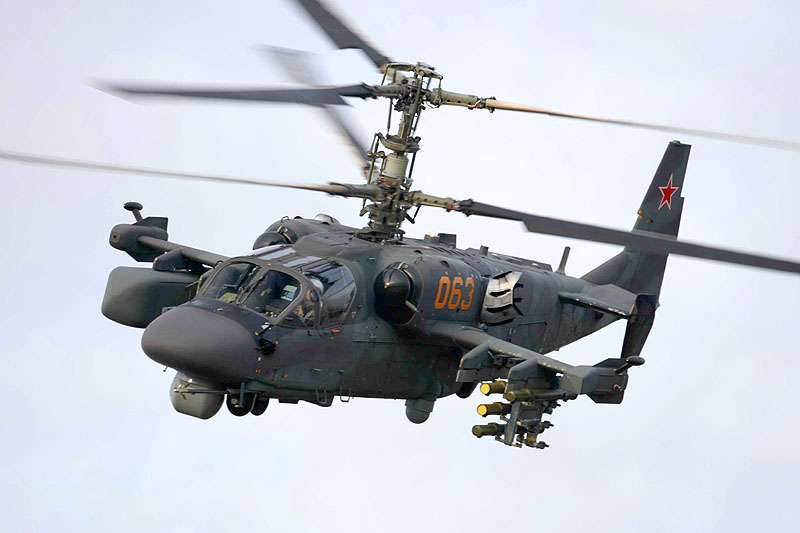 The favorite of the Russian public and, indeed, a unique helicopter of a new generation. Chief Designer Sergey Viktorovich Mikheev tried to create a powerful "drummer" in the best traditions of the Soviet school, but with due regard for modern requirements. And he did it.

Maneuverable, all-weather, well armored, high-tech, armed to the teeth ... In the end, he is just good-looking. Ka-52 is a truly successful continuation of the line of machines of the Kamov Design Bureau, where earlier, during the years of the so-called “perestroika”, they unjustly buried the forefather “Alligator” - Ka-50 “Black Shark”.

Ka-52 is made according to a coaxial scheme (a pair of screws rotate in opposite directions), which allows you to perform miracle maneuvers. Gust of wind in 140 km / h? No problem. The maneuverability of the helicopter does not deteriorate. In addition, thanks to this scheme of screws, the helicopter can fly both sideways, and the “back”, without turning the fuselage in the right direction.

The Ka-52, like its predecessor, the Ka-50, is able to perform a unique maneuver - the so-called funnel - to move in side flight in a wide circle above the ground target with a downward slope and an accurate view of it (mainly for active evasion of air defense). 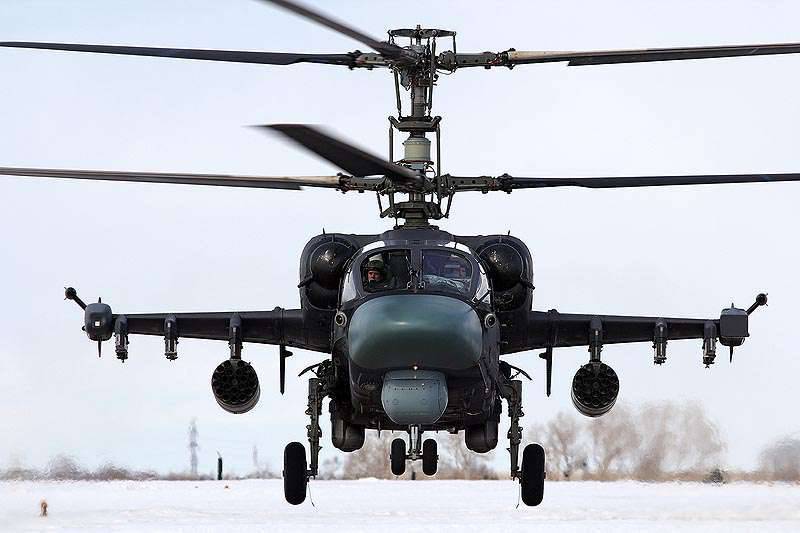 The hull is well protected from large-caliber machine guns and small-caliber guns (Afghanistan taught). "Alligator" is equipped with a unique pilot ejection system, which has no analogues in the world, or, more precisely, the only one of its kind. Cruising speed - 250-300 km / h, flight range - 520 km, payload more than 2000 kg. It is equipped with the “all-seeing eye” of the “Samshit” GOES, located under the fuselage (this is both a thermal imager and other technology wonders), as well as other state-of-the-art avionics.

With the combat power of the Ka-52 not compare any attack helicopter from the now existing. Underwing holders allow you to contain an impressive arsenal, namely: before the 12 ATGM of the last modification (Attack with a laser or radar beam), up to 80 unguided missiles, 4 Igla missiles for air combat, and anything else at the request of the client, so to speak (suspended guns, guided missiles, air bombs, etc.). On the right side of the fuselage there is a built-in mobile 30-mm gun mount. 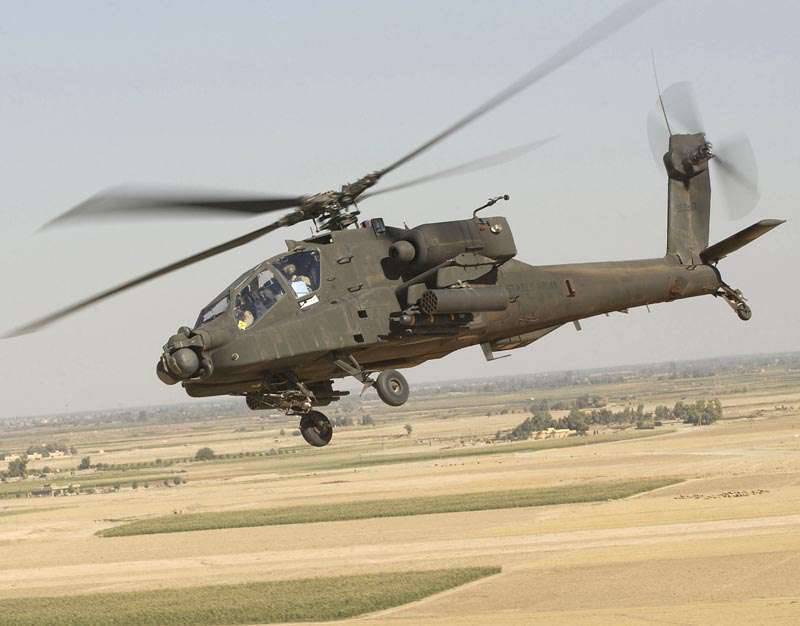 Let's look at the power plants of helicopters. The two installations on the 2700 horsepower of the Alligator are much more powerful than the two on the 1890 horsepower. at "Apache". Thanks to such a powerful "hardware", the Ka-52 can lift much more weapons, but in terms of flight range, it will only slightly concede to the American. Maneuverability is also good. The coaxial scheme plus sleight of hand is an elusive goal for the enemy’s air defenses.

We return to the booking body. Polyacrylic armor plates of the Apache can only reflect a single Kalashnikov line-up, and that’s not a fact. Although in the parameters of “American” there is a column “improved survivability”, the cases of a helicopter hitting a machine gun were officially documented.

Developers from the United States decided to focus on maneuverability and stealth, but they ignored such an important parameter as booking. Ka-52 is in the best traditions of the Soviet military industry generously and stylishly "wrapped up" with armored plates. Well, of course, the catapult - let's not forget about it! So who is more tenacious?

With regards to weapons. Before "Apache" our "Alligator" has three main advantages. First of all, it is an opportunity to raise ammunition and rockets as much as necessary, and not as much as the small capacity of the “American” allows. Secondly - the presence of identical weapons on other types of Russian military equipment. The same gun is on the BTR and the BMP, and the ATGM is on attack aircraft. In addition, our 30-mm projectile is many times more powerful than the Apache small-caliber projectile. Thirdly, both pilots can fire at the enemy from the Ka-52 (four hands are more than two). 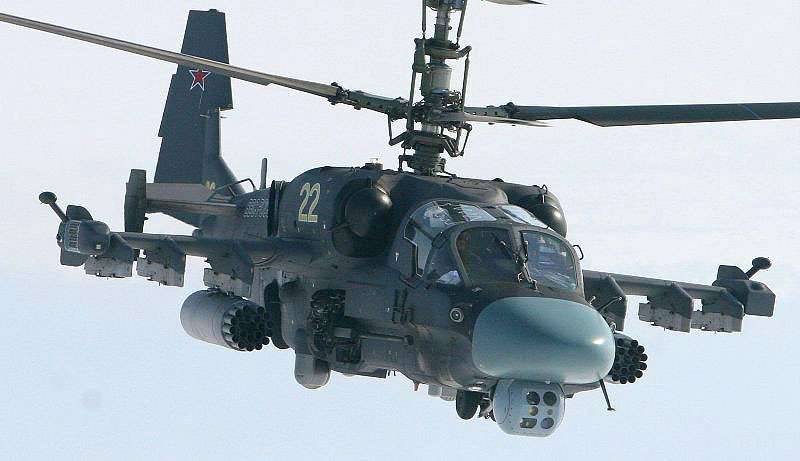 And finally, the cost. For the latest modification of Apache Longbow, the customer gives about 55 million dollars. For the Russian Ka-52 - only 16 million dollars. Three "Alligator" or one "Apache"? The choice, I think, is obvious.

Apache is ideal for well-planned tasks. When there are coordinates, there is support from the ground, there is an unsuspecting enemy ... But if the American "drummer" is thrown on a patrol of urban areas, it will be easy prey for the enemy. A weakly armored corps cannot elementarily save the crew from a “burning arrow” of MANPADS or a large-caliber machine gun.

Our Ka-52 is also not a “patrol” machine, but the tactical and technical characteristics completely allow the Alligator to work in absolutely any situation, be it reconnaissance, escort, or a full-fledged military operation using all types of weapons.

So, as they say, from the screw!