April 1 2016
54
Publications of foreign publications are of particular interest because they allow you to create an impression of opinions that are in circulation abroad. For obvious reasons, such publications often cause a lot of questions or even become a reason for justified indignations and condemnations: foreign authors do not always agree with Russian ones, and sometimes do not adhere to an objective point of view and build their thoughts on dubious theses or even propaganda clichés. However, there are often also literate correct articles that give correct answers to common questions of one kind or another.


29 March The National Interest published the next article by Dave Majumdar on American and Russian weapons under The Buzz. Under the loud headline, “Russia's Deadly Tu-160 Bomber vs America's B-1: Who Wins?” (“Russian Deadly Tu-160 vs. American B-1: Who Will Win?”) Hides a very curious attempt to consider the question posed and give the correct answer. Indeed, the comparison of the Tu-160 and B-1 aircraft is often the subject of discussion, but not always such disputes come to the right conclusions.

D. Majumdar begins his new article with a statement of obvious facts. The strategic bombers Rockwell International B-1B Lancer and Tu-160 (unofficial nickname “White Swan”, according to NATO classification - Blackjack) are very similar in appearance. In addition, there are certain coincidences in their tactical role. Nevertheless, despite all the similarities and coincidences, these are two completely different aircraft. 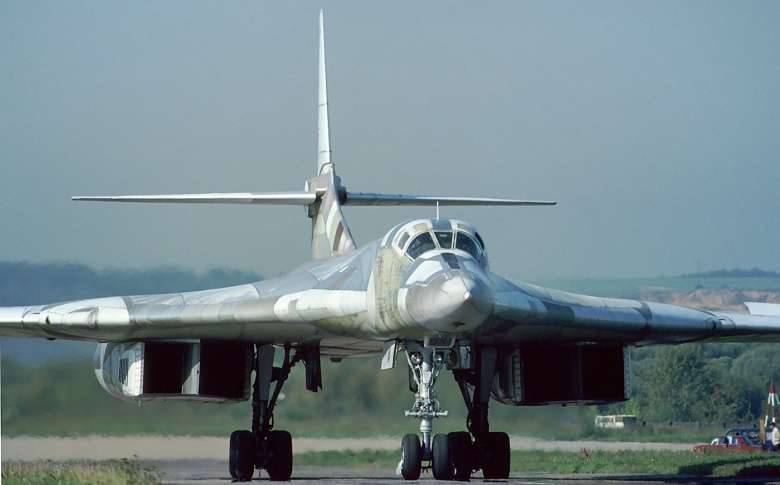 Finding the answer to the question “who will win?” Begins with consideration stories one of the contenders for victory. The National Interest journalist reminds that the American B-1A aircraft was once created as a supersonic high-altitude bomber designed to break through to targets through the air defense of a potential enemy. However, a similar project was canceled in 1977. The administration of President Jimmy Carter and the leadership of the Pentagon decided, not without reason, that such an aircraft had no real prospects. Experts have concluded that, in the existing form, the B-1A will not be able to pass through the Soviet air defense systems and accomplish the tasks assigned.

After that, the US leadership decided to adjust the development of strategic nuclear forces. It was decided to raise the priority of land-based intercontinental ballistic missile projects, as well as to start developing a promising aircraft capable of overcoming the enemy’s air defenses. Recent work eventually led to the appearance of an unobtrusive strategic bomber Northrop Grumman B-2 Spirit, but for a long time this machine and its development remained secret.

The revival of the project B-1 in a new form has already occurred under President Ronald Reagan. A new version of the project received the designation B-1B. Due to the impossibility of an air defense breakthrough at high altitude, it was decided to implement another way to reach the target. The updated B-1B should have a low radar visibility, as well as a breakthrough at a low altitude with a relatively high speed. One of the results of this revision of the project was a noticeable reduction in speed and altitude. So, the basic B-1A should have been able to fly at speeds up to M = 2. In the new project B-1B, the maximum speed was reduced to M = 1,25, which was associated with a number of major design changes aimed at meeting the updated requirements.

After the end of the Cold War, the B-1B Lancer project was again reworked. In connection with the termination of the confrontation of the superpowers and a change in the basic strategies, it was decided to correct the role of these aircraft. In accordance with the decision of the Pentagon, B-1B were to lose the ability to carry nuclear weapons and become carriers of exclusively conventional ammunition. In the 1995 year, as part of the Conventional Mission Upgrade Program project (“Refinement Program for Non-Nuclear Missions”), all the equipment necessary to carry a nuclear weapon was dismantled from combat bombers. At the same time, the aircraft received new radar stations with enhanced characteristics. In addition, it became possible to use modern high-precision weapons.

Later, after September 11 2001, the aircraft B-1B again underwent improvements. The main innovations concerned detection systems, target designation and communications. For example, the Sniper XR hanging container was adopted, which allows to increase the accuracy of the use of weapons. In addition, new means of communication and control. Recent improvements of combat aircraft have, to a certain extent, increased their combat effectiveness in carrying out tasks during local conflicts, such as the wars in Afghanistan and Iraq, including the struggle against irregular formations.

D. Majumdar believes that the B-1B bomber can no longer perform the tasks for which it was originally created. Due to several modernizations and the development of air defense systems, such aircraft can no longer break through the well-organized enemy defenses and strike targets deep in enemy territory. However, the B-1B still retains combat capability as a carrier. aviation missiles. To solve some combat missions, he will be able to use missiles of the JASSM-ER or LRASM type. Thus, in the case of some missions, the B-1B Lancer, with certain reservations, can be considered an analogue of the Russian Tu-160 bomber.

The Russian strategic bomber Tu-160 looks like an American B-1B aircraft, but in fact it is a completely different machine with different goals. Tu-160 was developed in Soviet times as one of the main means of delivering a nuclear strike on enemy targets in the event of the outbreak of World War III. In this case, reminds D. Majumdar, the main task of the Tu-160 was to deliver air-based cruise missiles with nuclear warheads to launch points. Also provided for the possibility of breaking through the enemy's air defense with the help of high-speed flight at low altitude.

Since the introduction of the Tu-160 bomber, its main armament has been the X-55MS long-range cruise missiles. A dozen of such products equipped with nuclear warheads can be housed in the cargo hold of the aircraft. In recent months, when the Tu-160 first took part in real combat operations, the aircraft’s ammunition assembly included the conventional version of the X-55MS rocket called X-555. In addition, during the execution of tasks for the destruction of terrorist facilities in Syria, Russian bombers used the latest low-profile X-101 missiles. There is information about creating a similar weapon carrying a nuclear warhead - X-102.

The author of The National Interest reminds that in the near future Russia plans to resume the construction of Tu-160 strategic bomber-missile carriers. After the resumption of construction in the series should go an improved version of the aircraft, received the designation Tu-160М2. D. Majumdar believes that the new serial Tu-160М2 should be replaced by the existing Tu-22М3 and Tu-95MS aircraft, which currently complement the existing Blackjack fleet. Also, the American journalist suggests that the upgraded Tu-160 will become a kind of temporary measure that will allow Russian strategic aviation to maintain the required potential until the appearance of the new PAK DA bomber.

In the final article D. Majumdar gives an answer to the question in the title. Rather, shy away from the answer and justifies it. In his opinion, the question from the title of the article cannot be considered correct. Bombers Tu-160 and B-1B are too different from each other. Differences lie in the design features, in the characteristics and even in the purpose of technology. Thus, the question “who among them will win?” Cannot have the correct answer.

Comparison of various types of weapons and military equipment is a favorite occupation of specialists and the public. Such analyzes allow us to study the situation in a particular area, as well as to draw conclusions about the possibilities of certain samples both by themselves and in the event of their confrontation. For many years, traditional objects of comparison have been the mass of weapons and equipment, including the Tu-160 and B-1B Lancer bombers.

The appearance of such a pair of "rivals", in the first place, contributes to the appearance of the two aircraft. Both the Tu-160 and the B-1B are multi-mode supersonic long-range bombers, which, with certain reservations, makes it possible to assign them to the same class of technology. However, in addition to external similarity, the two samples have a lot of differences in terms of design, characteristics and tactical role. Similarities and differences, as well as their different interpretations, as a result, become fuel, supporting controversy and discussion.

It should be noted, the answer to the question "who is whom?" Has long been known: no one and no one. Firstly, the Tu-160 and B-1B bombers are too different from each other so that they can be compared directly, and secondly, these are not the planes that will be encountered in full-time combat and find out who is stronger. Therefore, it is possible to compare two samples only by their characteristics and combat effectiveness.

As already mentioned, sometimes there are publications in the foreign press that are impossible to argue with. D. Majumdar's article “The Dead Dead Tu-160 Bomber vs America's B-1: Who Wins?” Is a good example of a phenomenon. The American author remembered the story of two projects and reviewed their main features. The result of such consideration was the thesis about the incorrectness of the question “who is who?”, Put into the title. According to the author of The National Interest, the aircraft under consideration are too different to be compared in this way.

As the author rightly notes, the American B-1B bomber was created to carry out a low-altitude supersonic breakthrough to targets in the territory protected by powerful air defense. The task of the Tu-160, in turn, has always been the delivery of cruise missiles to the launch line, and at the expense of their long-range aircraft could not even approach the enemy’s air defense zone. Such a difference in the methods of combat work of the two aircraft was due to the main features of long-range aviation strategies developed in two countries. Experts of the USSR and the USA, having studied all the factors, formed their own requirements for equipment and its application.

An interesting fact is that after the end of the Cold War, the American B-1B aircraft underwent serious modifications. It was decided to deprive them of the possibility of carrying nuclear weapons. In addition, some problems with the nomenclature of weapons led to the fact that these aircraft for a long time could not use missile weapons - their weapons were only bombs. From this point of view, the Russian Tu-160 was much more fortunate. He did not begin to alter with the changing role, however, over time, the nomenclature of available ammunition was replenished with several new products.

The result of all these events that took place in the past decades are the corresponding features of the combat use of technology. American aircraft B-1B Lancer were repeatedly involved in the implementation of air strikes against targets in the territory of Afghanistan and Iraq, which used guided bomb weapons. Tu-160 was able to participate for the first time in a real combat operation only in the autumn of 2015, and immediately used cruise missiles, including new types. Thus, the military operations of recent years are an excellent and clear demonstration of the difference between the two aircraft.

Due to the presence of significant differences of various kinds, direct comparison of Tu-160 and B-1B bombers is not possible or meaningful. The article of D. Majumdar and her fair conclusions once again remind us that not always the external similarity of weapons or equipment models allows us to compare them with each other. In addition, we should not forget that appearance is rarely the most important part of the samples under consideration, and the most interesting part is connected with their internal parts and application methods.