Forging "freedom of speech" in the Baltic

April 1 2016
31
As soon as the results of a fresh poll were published in Estonia regarding who (what) Estonian citizens consider to be the main threat to the country, the main ideologue of the “Russian go!” Horror stories had to be taken urgently by media measures. The fact is that the majority of Estonian citizens did not name Russia as the main threat to the country, as people hoped to arrange such surveys, but Arab and African refugees who flooded Europe and are ready to settle on a permanent basis and in the Baltic states also. Understanding that the failure of anti-Russian propaganda happened somewhere, the bureaucratic camarilla of the free Baltic struck the alarm: they say, you have to do something, otherwise the Baltic population will get rid of the general line ...


To begin with, they invented an explanation of the results of the Estonian poll. In the Baltic media announced that the case, it turns out, in the Russian propaganda. They say that the Russian media broadcast on Estonia, Latvia and Lithuania, and the gullible local population takes to heart the “false” Russian TV reports about millions of refugees in the EU countries, and therefore the result is as follows. No, they say, there are no millions of refugees ... And if there is, then all of them are about to be European-integrated and stop shitting in the fitting rooms and crawling with their tanned hands (and not only their hands) under the skirts of European women ...

Well, as soon as the explanation was written, the matter remained for the small: to declare that we need funds to counter the "Russian propaganda", so that the Kremlin would not have the opportunity "to influence the democratic minds of the Baltic states".

In Europe, the apprehensions of the Baltic storytellers were applauded and decided to support - in word, deed and money transfer. A project called the Baltic Center for Media Excellence has been launched in the Baltic countries. The launch of the project took place a few months ago, and now it has become known to journalists that the project is working “on countering Russian propaganda” for the money transferred from compassionate European defenders of Baltic democracy. In total, about 2,5 million euros have been allocated to the existence of the Baltic center. Among the main sponsors of the project, which, apparently, suggests some modern version of Voice of America or Radio Liberty, such structures as the European Endowment for Democracy, the Northern Council (Denmark, Norway, Sweden, Finland, Iceland (in it Baltic countries are listed as observers)), the government of Poland and the government of the Netherlands.

It seems that citizens, for example, of Iceland would be quite surprised that not all taxes paid by them to the state treasury go to the development of the economy of Iceland itself, which at one time did not fall into the Greek version only because of Russia's credit. And these taxes are coming to support the propaganda desk in third countries, whose tasks are to water the mud in Russia.

Although it is unlikely that anyone in Europe will tell the same Icelandic taxpayers about what exactly they are financing. Indeed, the description of this Baltic Media Improvement Center states that it will be engaged in the development of the media, attracting a multilingual audience to increase the level of interaction. Good, you know, goals. 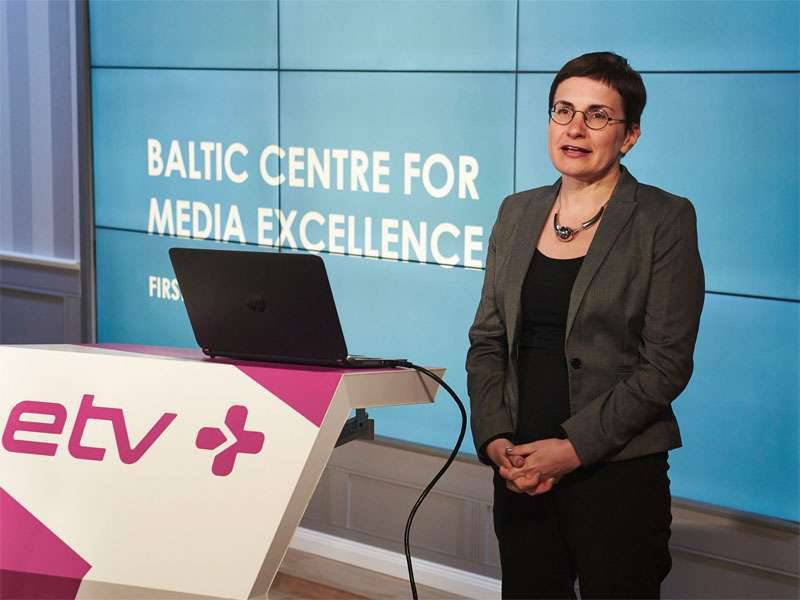 And this is already from the presentation of the Baltic Center itself:
The main purpose of the Center is to strengthen the independent public interest on the basis of the media. We respond to specific events. Covering the whole region providing information modules for editorial offices of national and local mass media of Estonia, Latvia, Lithuania, and also countries of the Eastern Partnership.

That is, the center with funds received from European “partners” will provide (apparently, already provides) to the Baltic, as well as (as necessary) to the Georgian, Ukrainian, Moldavian and other mass media such materials that are concocted in the West or under the western tune.

And therefore you can come up with at least a hundred bright and beautiful signs for this center and its activities, but the fact remains that the “centurizers” are engaged in an outspoken order, trying to promote those materials that fit the interests of Western “partners” closer to the borders of Russia.

And so that the Baltic Center for Media Improvement improved the media more calmly and more actively, the next stage of clearing the information field from the Russian media began in the Baltic States. More recently, the information portal of the agency was blocked in the region Sputnik in the Latvian domain lv. The site sputniknews.lv killed by those who call themselves champions of freedom of speech. Under the guise of "countering Russian propaganda" in the Baltics, the media are getting rid of, providing the local population with an alternative point of view on events. And if it was just an alternative, and even more objective. And can the pseudo-democratic pseudo-democracy sponsors allow themselves so that the zombie population of satellite countries has a head on their shoulders and can draw information from different sources to form a picture of objective reality ... And so that the head on the shoulders of the Balts "does not grow," such centers as the one in question, will be financed very actively under the most good slogans.

Ctrl Enter
Noticed oshЫbku Highlight text and press. Ctrl + Enter
We are
Refugees from Syria. Will Russia accept immigrants from the Middle East?What to do with the refugees? Eastern Europe to host thousands of Africans and Asians
Military Reviewin Yandex News
Military Reviewin Google News
31 comment
Information
Dear reader, to leave comments on the publication, you must sign in.