Flint Lock Musketon Gun from the Beginning of the Century 18 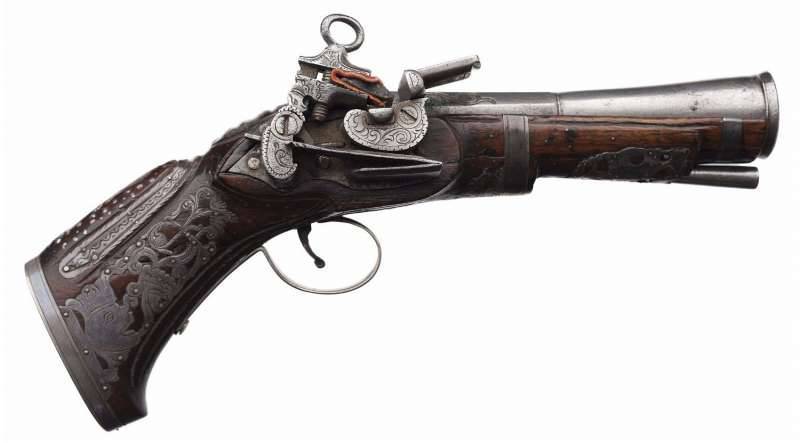 The term Musketon or Blunderbuss is derived from the Dutch word “Donderbus”, which translates literally as “Thunder pipe”.

The transition from the word “donder” (thunder) to the word “blunder” (error) probably occurred due to low accuracy weapons when shooting at long distances. Although it is possible, and vice versa, “error” implies a visual discrepancy between the relatively small size of the musket (Blunderbuss) and its high effectiveness in close combat.

Musketons are the prototype of modern shotguns. They were made both long-barreled and in the form of short-barreled weapons - pistols. The musketon became the favorite weapon of boarding combat, mounted warriors, and also along with a pair of pistols became the standard armament of postal carriages. In the early musketons, the forearm tip was made in the shape of a dragon's head. During the shot, the impression was that the fire-breathing dragon was striking the enemy. 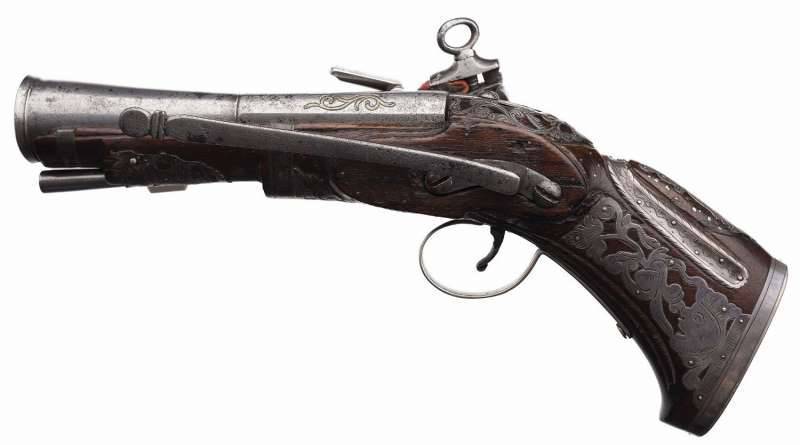 It is because of the characteristics of the armament and the term Dragon (dragon) that the name of the cavalry units - Dragunov (dragoon) - came about. Dragoon regiments were created in most European armies at the end of the 17 and the beginning of the 18 centuries. It was at this time marked especially mass production of musket. 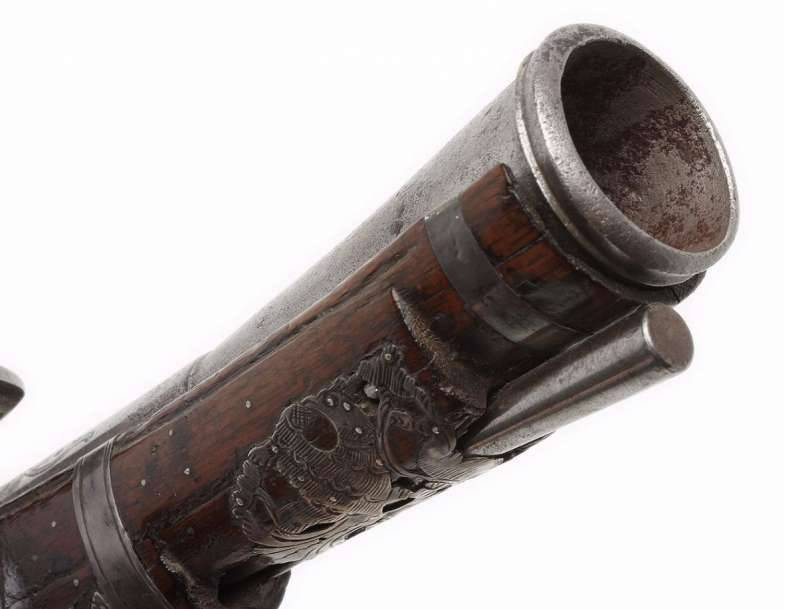 The musketket expanding at the end contributed to a large defeat area at short distances and simplified the loading of the weapon. It was easier to pour gunpowder and charge of lead balls into the socket, which is especially important for an equestrian warrior.

Presented on the photo musket-gun made at the beginning of the 18 century. The total length of the weapon is only 275 mm, barrel length 155 mm, barrel diameter at the muzzle 27 mm. Under the barrel in a special nest is placed a ramrod with a steel tip. 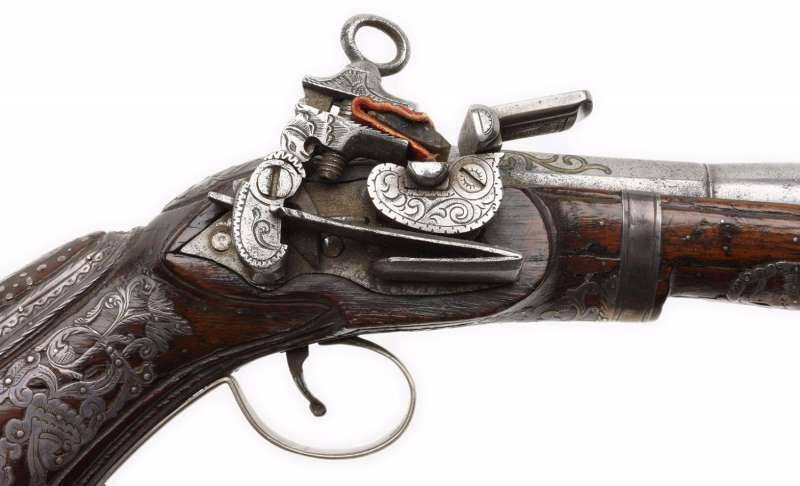 A flintlock of Mediterranean type, probably of Spanish origin, is installed on the right side of the bed. The overall design of such locks has a single name mikelet (miquelet) and is similar to the design of the Caucasian flint locks. The spring is located on the outer surface of the keypad. The screw head of the trigger is made in the form of a ring. Steel trigger guard, has a rounded shape. Trigger curved with a ring-bent tip. The metal surfaces of the parts of the castle are engraved. 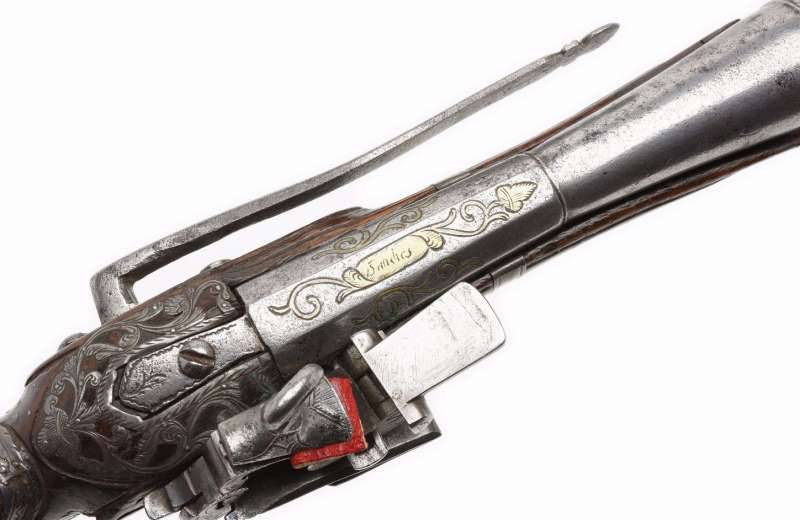 On the left side of the box there is a bracket for fastening the weapon on the belt. The bracket is attached to the box with two screws with semicircular heads. The first half of the trunk has an octahedral shape. On the top there is an engraved text "Sanches". The name of this master is found in reference books with reference to weapons manufactured between 1720 and 1740. 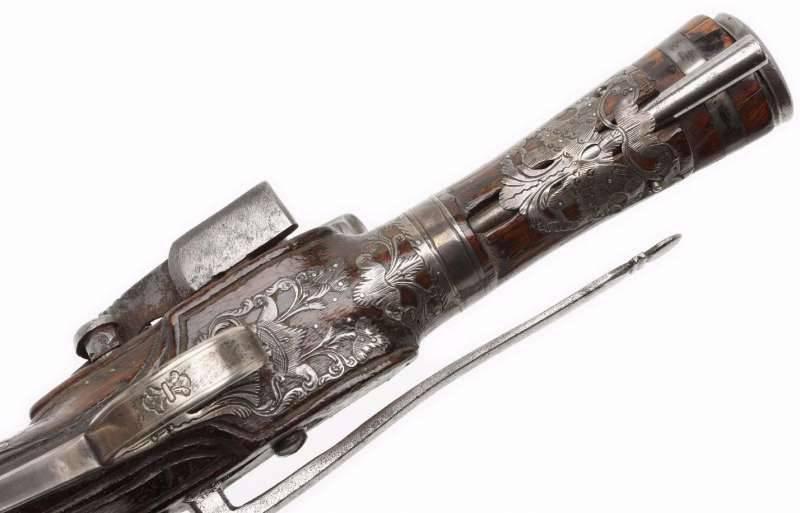 In the lower part of the forearm two rings are installed to prevent the wood from cracking. The surface of the bed covers the inlay of silver plates, fixed with small studs. 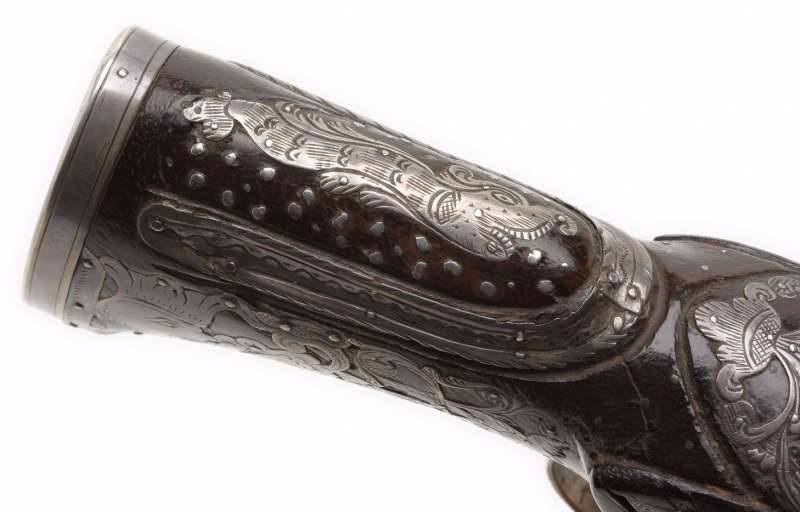 The inlays on the bed are made not only in the form of a geometric pattern and floral ornament, but also depicts various fanciful faces and mythical creatures. The tail portion of the handle is extended and resembles a rifle butt. Its tip is reinforced with metal to be used as a melee weapon. 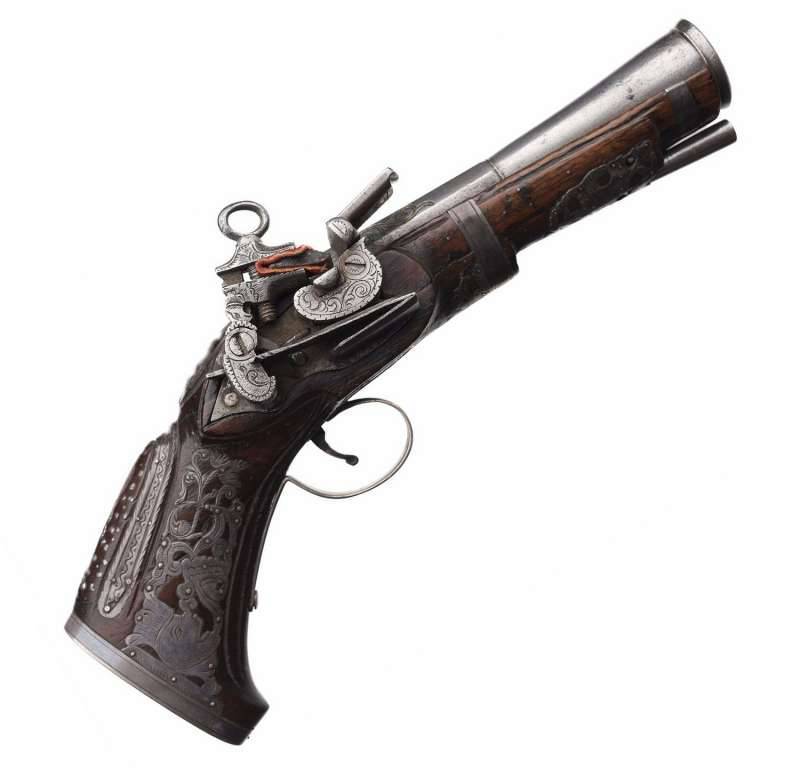 This musket gun is certainly a very original and unique weapon. Such weapons were made in single copies and represent a huge historical and cultural value. In 2015, these weapons were sold at one of the American arms auctions for $ 10.