April 1 2016
110
If even 10-15 years ago, the officers of the military commissariats announced that conscription issues related to staffing would be resolved before the conscription began, then many would think that they only smiled bitterly. To serve the Motherland themselves - without stretching through numerous subpoenas or engaging law enforcement officers - not all persons who fell under the draft campaign were called. Many had to, as they say, drag them by the ears, neck and other parts of the body, so that they would realize their honorable duty.


The fact that even before the president signed the decree it was possible to talk about staffing, but also that it would be necessary to arrange almost a competition for vacancies, previously military commissariat officers could only dream of. It was generally their sweet dream, which seemed unrealizable. And here, as one well-known advertisement tells us - dreams come true ... 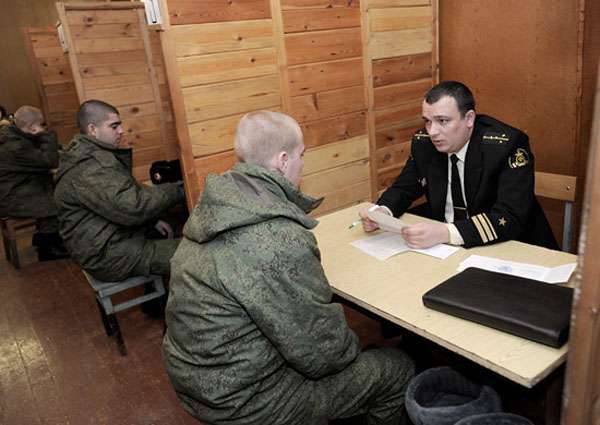 Information that the call "Spring-2016" will be all right and even better, appeared on the basis of the collection of military commissioners of the Russian regions. We are talking about the Moscow region gatherings of military commissars of the Western Military District, which was recently reported by the newspaper "News". Reporting indicates that the number of draft dodgers among persons of military age has decreased by an order of magnitude. Moreover, if the letters of complaint that they are not taken to serve, were previously noted except that the North Caucasian (Chechen and Dagestan) draftees, now representatives of various levels of government receive such letters in various regions of the country. Young people complain that the officers of the military commissariats refuse to call them, as those who wish to serve have certain limitations revealed during the medical commission. This may be, for example, overweight or relatively weak eyesight. The reasons for the refusal of draft commissions are simple: the fact is that the military registration and enlistment offices have the opportunity to make real choices. And why risk a young person’s health if the “quotas” of an appeal allow one to “deal” with those who are suitable for health and anthropometric parameters, as they say, here and now.

Those who wish to serve in the army today are about 30 thousand, more than planned to call. The total "spring" draft plan - 155 thousand people.

What has changed in the Russian army, and why has the service in it become much more attractive than it was a decade or two ago? Answering this question, you can philosophize for a long time, but in fact any philosophy will be superfluous, because everything lies on the surface. Increased prestige of the Russian army. And not only the word-of-mouth radio works here - when young people who have served on conscription tell their friends who are conscripts that the army (at least in the overwhelming majority of military units) is fine with feeding and uniforms, and with a number of real practical exercises. Although the role of such a word of mouth is very significant in this case. It also works that the modern youth of the draftee sees on the TV screen, computer, smartphone.

Someone may be surprised, but many modern young people are very actively watching the newsconcerning the conscription service, and indeed the state of affairs in the Russian army. And if you compare media reports about this state of affairs yesterday and today, the difference is huge. The frightened yesterday's teenagers, dressed in some sort of castoffs and unfeeding from a total lack of funding, and quite worthy soldiers of a worthy army, are already appearing on the screens. And not the army, as in the 90s, turned by those in power, excuse me, into a rabble, and actually thrown at the mercy of well-equipped and trained militants of international terrorist cells in the North Caucasus - without any support from the population. And the victorious armies. Yes, yes ... It’s the winner! The same army, whose representatives have recently shown themselves to be real professionals and heroes, inflicting crushing defeats on the very same terrorist bandit groups, but this time "entrenched" in Syria.

Young people see the awarding of heroes who have returned from the Hmeymim airbase. Young people are watching how Russian is improving. weaponand what interest it has in the representatives of foreign countries. Young people understand that taking a place in the structure of defending the Fatherland today is a really serious motivation and a real honor.

The attitude of society towards the modern Russian army has definitely changed. If even 10 years ago, public opinion polls demonstrated the disbelief of Russians that the army is capable of protecting the country and its citizens, today there is a radical change in the situation. The majority of Russian citizens (more than 60%) consider the Russian army combat-ready and sometimes ready to solve the most difficult and responsible tasks, regardless of which enemy they are talking about. But it is the attitude of society towards the army that is another important element of the prestige of military service. When a soldier is confident that he has support in the form of a reliable rear, that the social significance of his service is great, then the level of his personal responsibility to the state and society rises.

Yes, of course, it is impossible to say that all problems in the modern army have been solved. In principle, no one talks about this. It is important that these problems can be solved in principle if the state turns its face to its army. The increase in the prestige of the army service does not come only because from where the relevant directives will descend from above. The prestige of the army, which is now actively being restored, is a titanic work that state structures cannot do without public support by definition.

In general, the spring draft campaign in Russia started on a positive wave. Good luck recruits!