April 1 2016
43
The photo in the German newspaper is a Ukrainian woman with a poster. Close-up. On the poster, a portrait of P. Poroshenko and the slogan: “Get out!” Whom is this “get out”? The text says who: "Parasha." The German press, calling the president an independent “oligarch”, makes it clear that the Europeans no longer believe in the “democratic transformations” in Ukraine. Just as Ukrainians themselves do not believe in them. 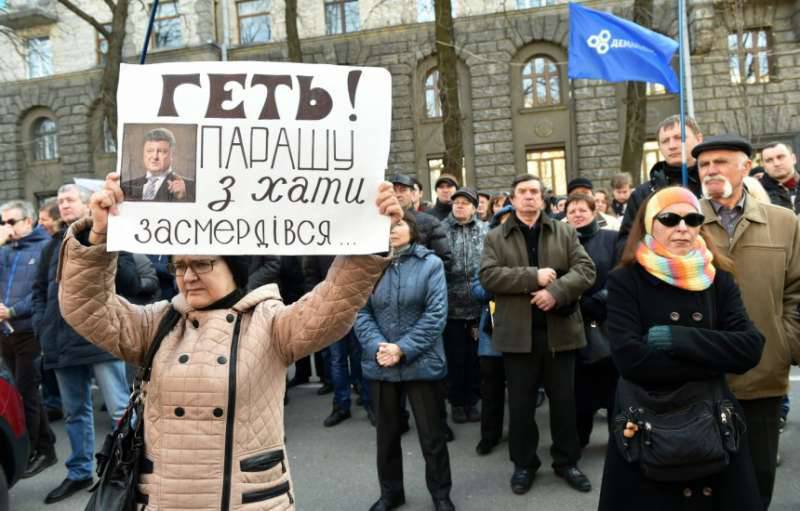 It is difficult to say whether the Germans understand the meaning of the term “creep” indicated on the poster. However, such photos are still rarely found in the influential German media.

Today, in the German press, President Petro Poroshenko is contemptuously referred to as an "oligarch." It turns out that the candy king is not only incapable of real changes in politics and economics, but he himself does not fulfill his own promises. Well, still: Poroshenko once promised the people that he would sell his candy empire Roshen. Did he do it?

Petro Poroshenko promised the Ukrainians a lot, but did little. Corruption thrives, oligarchs fatten. Despite the promised reforms, the allegations of fighting corruption, nepotism and oligarchs, in reality there is no struggle. “This is not surprising,” writes a journalist with irony, “because the president himself is an oligarch.”

A man named Mustafa Nayem (Mustafa Nayyem) spent a year and a half in the Ukrainian parliament (he is a deputy from the electoral bloc of President Petro Poroshenko). And what? And the fact that Nayem has become "a witness to many disputes on the topic of the fight against corruption," writes the journalist.

When a faction in parliament leads such discussions with the president, “everything sounds good,” Nai, told the German journalist. “In fact, there is nothing good!” He exclaimed.

That is why on Easter Monday, this Naima, who was born in Kabul, but grew up in Kiev, with hundreds of other Ukrainians, came to a mass protest about the worthless Ukrainian policy.

This Nayem is a very colorful person, and he is visibly dressed. His head is shaved and he always wears black clothes. This is a kind of "symbolic figure," says the correspondent.

21 November 2013 of the year he called on Facebook to protest against then-President Viktor Yanukovych. The protests on Maidan put an end to the “corrupt” and increasingly presidential regime. After Yanukovych fled to Russia, billionaire Petro Poroshenko became the new president.

But what has changed since May 2014? Yes, essentially nothing.

Despite Poroshenko’s declared reforms, despite his promises to fight corruption, nepotism and oligarchs, there is no progress in all these matters. “This is not surprising: after all, the president himself is an oligarch,” the journalist sneers.

Military chaplain Oleksandr Mishura reminded the reporter that two years ago, before his election, Poroshenko “loudly promised” to the people that he would sell his chocolate empire Roshen. “I did not hear him actually do this,” said the regimental priest. On the contrary, new branches of Roshen are opening around Ukraine.

Recently, the chaplain visited the east of Ukraine, visited the soldiers of the urgent service. These “guys,” the priest told, learning that everything in Kiev, without change, was “disappointing.”

The parliamentarian Nayem is also disappointed: “For two years we have been talking about the need to fight corruption and an independent prosecutor general, but nothing has changed.”

The Attorney General, who oversees more than 18.000 employees, is “independent” and participates in the “fight against corruption” only on paper. Poroshenko became president, and he appoints prosecutors general by decree. We all hear his words, says Nayem, but “we don’t see any action.”

During Poroshenko’s rule, his attorney general, Viktor Shokin, in spite of criticism of society, blocked the lifting of immunity from other parliamentarians suspected of corruption. Prosecutors who are ready to effectively fight corruption, simply quit.

Dissatisfied with not one Hire.

Oleg Prokhorenko was hired as a "reformer" who could clear the Augean stables of corruption in the state gas company. And what is the result?

He told the Kyiv Post about a “systematic” opposition to his attempts by parliamentarians, tax authorities, domestic intelligence and the said attorney general. End-edge corruption can not be seen! But it costs the taxpayers millions of euros.

Dissatisfied with the Ukrainian situation and US Deputy State Secretary Victoria Nuland. She stated in the US Congress that the "oligarchs and kleptocrats" of Ukraine had once again intensified, and called for "the appointment of a new, clean Attorney General."

29 March, add to this, the Ukrainian MPs still sent the Attorney General Shokin resigned. For his dismissal voted 289 elected representatives of the people.

“The claims against the Prosecutor General’s Office of the times of Viktor Shokin are a cascade of corruption scandals, the lack of visible progress in high-profile cases, including in the case of beating Euromaidan activists; confrontation with NABU, as well as internal strife, which became public, ”writes Finance.ua.

In addition, just a few hours before the resignation, Shokin dismissed his own deputy, the prosecutor of the Odessa region and the representative of the Georgian team of reformers David Sakvarelidze from his post. Formal reasons for dismissal: abolition of position and violation of ethical standards. David participated in the protests demanding to dismiss his immediate superior, I mean Shokin.

“A separate short story in this stories Shokin’s personal involvement in the case of “diamond prosecutors” - two high-ranking prosecutors detained in July last year for extorting a bribe in 3 million hryvnia (about 10 million rubles) - is considered to be A. Kapustin in Novaya Gazeta. - During searches in offices and apartments, they were found hundreds of thousands of dollars, unregistered firearms weapon and a few dozen diamond packages. ”

The United States has already approved the resignation of Shokin.

The United States welcomes the resignation of Viktor Shokin from the post of Prosecutor General of Ukraine, said US Ambassador to Ukraine Jeffrey Payette.

“It does not matter how much assistance the international community provides to Ukraine, no matter how much money and technical support Ukraine receives: Ukraine does not face the challenge of overcoming corruption. Therefore, today's actions in the Rada, which we welcome in dismissing the discredited Attorney General, are so important, ”the ambassador said, not quite intelligible words. Interfax - Ukraine.

Pyatt believes that it is now important to find a new Prosecutor General, who should be independent, have the support of civil society and be committed to the principles of Euromaidan. “It is important to determine the leader who can go this way. And Shokin is not this leader, and it’s very good that he will leave, ”the ambassador concluded.

Payett and his bosses in Washington, we add, will not understand in any way that anyone who comes to the vacant post of Prosecutor General will be connected with President Poroshenko with known threads. “Parasha” from the poster of the protesters is the most important corrupt official whom the people want to “get out”.

Victoria Nuland, who called for “the appointment of a new, clean Attorney General,” thinks that someone “clean” can get into power. Nuland has long been posing as a naive girl. After all, it was she who was handing out rolls and cookies on the Euromaidan, believing in the bright future of Ukraine. And in fact, as a result of this “Maidan”, Poroshenko won the “election”, whose “election” was welcomed in the USA. And if Washington is now branded as a corrupt official of the former Prosecutor General, then why are Poroshenko’s activities being silenced, whose command is this Prosecutor General? Well, yes, Poroshenko is the creature of the White House, it is inconvenient to touch him. Berlin proposed to make a prezik Klitschko, now known for his aphorisms, a couple of years ago. Would be, by the way, the ideal president. Listening to him is a pleasure.

When in February Poroshenko’s 2015, by his decree, appointed V. Shokina the Attorney General, people made fun of this appointment. Here are a few comments that time: 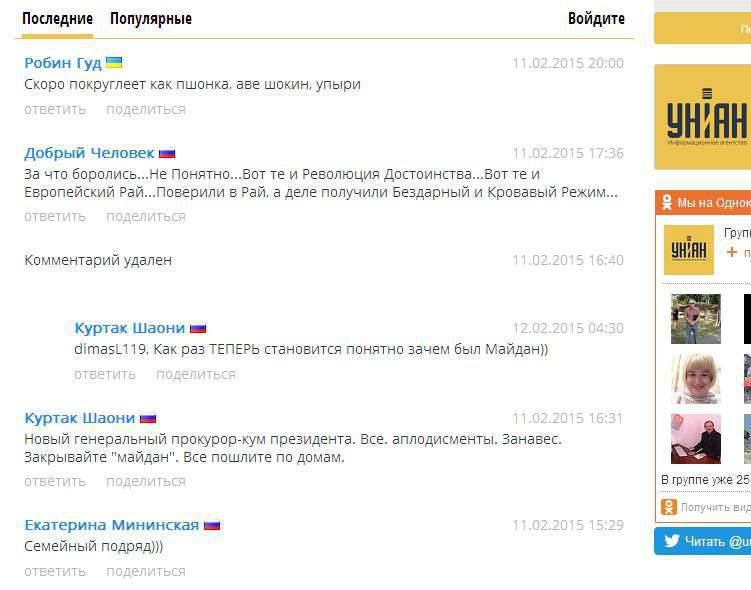 Comments of readers from the site "UNIAN"

In short, the Ukrainian oligarchs and kleptocrats in power have proved to the West what they can do. “Democracy” did not work out, and this means that not only the Prosecutor General, but also the candy king in the West is worthless on the market day.

Observed and commented on Oleg Chuvakin
- especially for topwar.ru
Ctrl Enter
Noticed oshЫbku Highlight text and press. Ctrl + Enter
We are
Results of the week. “We won't give you the keys! We're not Pinocchio! ”Basic training program for Navy SEALs and the US Navy SEAL and Army Special Forces
Military Reviewin Yandex News
Military Reviewin Google News
43 comments
Information
Dear reader, to leave comments on the publication, you must sign in.