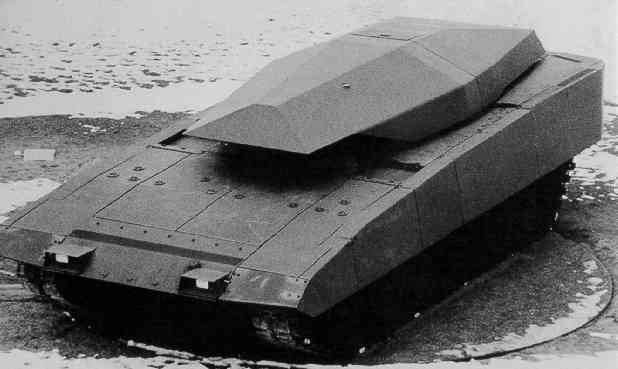 Even during the Second World War, the German military industry showed how it loves all sorts of innovations and near-fantastic projects. On the one hand, it ate a lot of money, so important for a warring country, and on the other hand, a lot of the concepts of that time later found a full-fledged application. After the War, the German designers did not abandon their cravings for new products and, among others, were among the first to work on unified armored platforms.

Rather, as is usually the case, the military held a series of consultations in their environment and with engineers, made an approximate look of an armored vehicle for the near future and singled out all these works into a separate topic called NGP (Neue Gepanzerte Plattform - New Armored Platform). True, skeptics-wits almost immediately came up with a new transcript: the NieGebaute Panzer (tank that has not yet been built). It was at the beginning of the 90-s of the last century. The German military could be understood - the idea of ​​a single basis for a whole range of equipment for various purposes and twenty years later was not outdated and considered promising. In addition, the Bundeswehr did not want to waste money, and the unification is very good for the financial side of any project, especially a project involving the complete rearmament of the army.

The terms for work were agreed as follows: until 1996, a work plan and the appearance of the platform were developed, by the 99th it was necessary to create a technical task and start a development competition. Until 2005, it was planned to bring to mind the tank, and until 2009, and BMP based on it. By the 15th year, it was planned to begin arming the troops with new tanks and BMP, and after the 20th, add to them other NGP family vehicles (ARVs, anti-aircraft self-propelled guns, tank support vehicles, sapper tanks, etc.).

First of all, engineers began to work on the crew’s question. At one time, the automatic loader allowed to reduce it. Based on this logic, it was supposed to automate other components of the work of the armored vehicle to further reduce the number of people in the tank. In 91, a test module was built, which was a double cabin. Of course, we had to work closely on the automation of various processes, but in the end we managed to reduce the crew to two tankers. However, all this required a lot of time, and a full-fledged experienced crew compartment module called KRM was ready only in 1997. 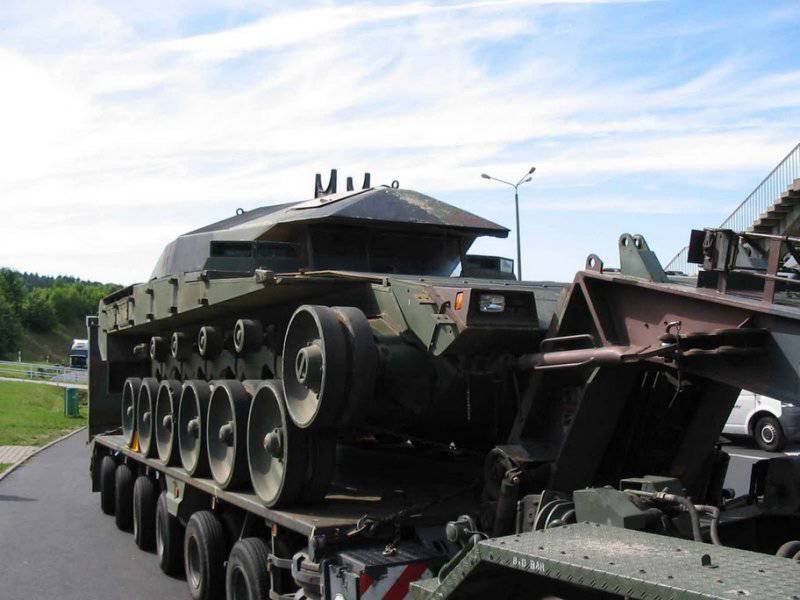 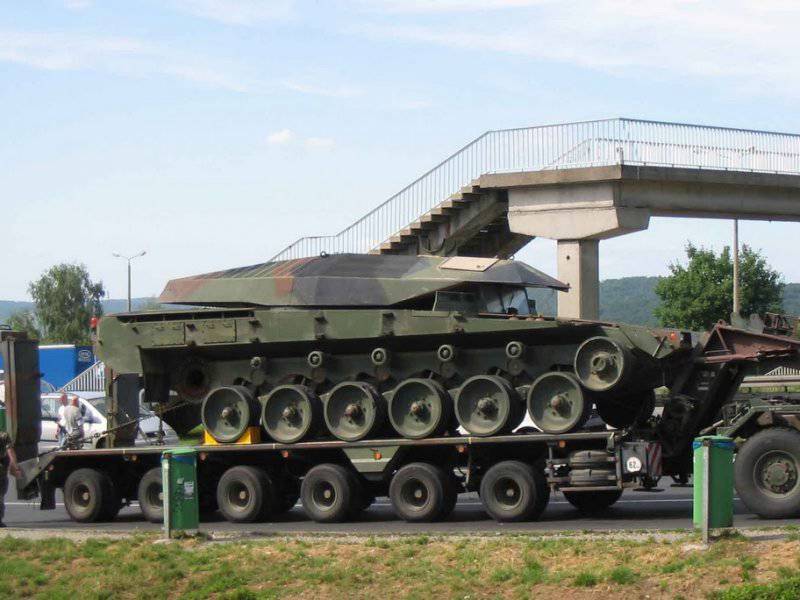 In parallel with the crew module, issues of protection, weapons and additional equipment were worked out. Moreover, the options were considered even fantastic: we seriously considered the possibility of using an electromagnetic gun with an 140 caliber of millimeters on the NGP. However, this idea was rather quickly abandoned - for quite objective reasons humanity will not have suitable samples for mobile equipment for a long time. weapons. So the NGP tank had to carry the good old "powder" gun. They didn’t hesitate with the caliber for a long time - they chose the usual 120 mm, although they were thinking about the promising 140-mm gun.

Since the project was calculated for the future, it was decided to look for new ways to improve protection. Of the several options chosen modular booking. Thus, the undercarriage, which has its own armor, can be “covered” with additional armor panels that improve protection. Accordingly, the NGP family of infantry fighting vehicles, not equipped with additional armoring, could have less weight and driving characteristics typical of this class of equipment. The tank, in turn, still at the factory should be equipped with panels of appropriate thickness. At the same time, the possibility of their dismantling was considered to facilitate the transportation of tanks by aircraft: the tank flies separately from additional armor.

As for the engine, then, without further ado, they decided to choose a relatively compact motor of the appropriate power. The small size of the engine was not a fad, but a necessity. The fact is that the engine compartment on the NGP platform was originally planned to do in the stern. For the tank it is not scary, and the infantry fighting vehicle in this case risks losing a full-fledged detachment for the landing. Accordingly, the engine should be small and not interfere with the placement of soldiers. True, at that time Germany did not yet have an engine with suitable characteristics, but in the Bundeswehr they did not grieve about this: there was enough time to create an NGP and the engine builders would definitely have time for the deadline.

In the 1996 year, when the Bundeswehr decided on the appearance of the future car, several companies were involved in the work: Krauss-Maffei, Mak Systemgesellshaft, Henshel – Wehrechnik and others. By that time, the look of the NGP looked like this:
- modularity. The basis of the entire line. Allows you to install on one undercarriage a set of blocks provided by the design of a particular machine.
- combat weight of about 55-60 tons for heavy infantry fighting vehicles and 55-70 for the main battle tank.
- tight layout. Due to it, it was planned to provide maximum volumes for payload (ammunition for a tank and troops for infantry fighting vehicles) or the small size of the vehicle.
- accommodation of the entire crew inside the hull and uninhabited tower. For this, the KRM module was created.
- engine power not less than 1800 hp Such a diesel engine was supposed to provide the necessary driving performance of a fairly heavy car.
- Multilayer modular armor. As already mentioned, it was supposed to provide both protection and ease of production and operation, as well as to facilitate the transportation of vehicles with available means. 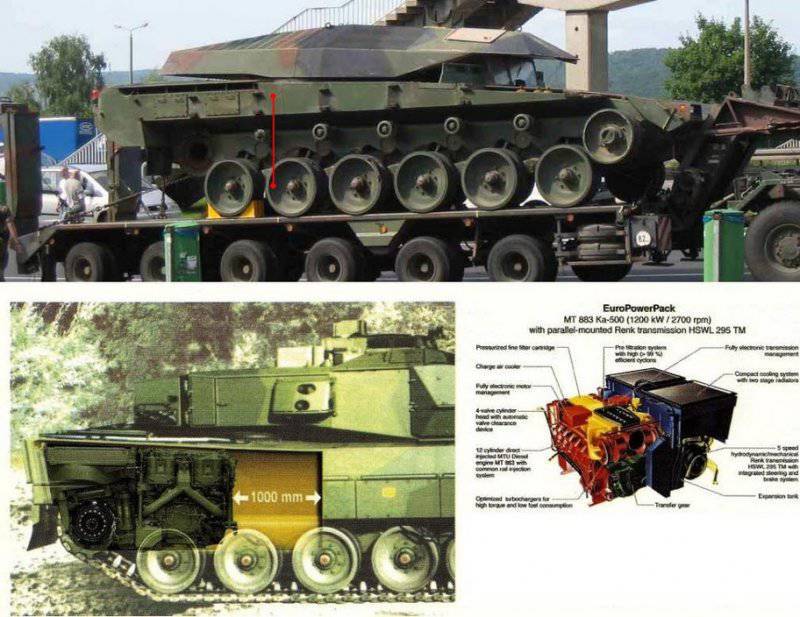 - active protection. All vehicles of the family, with the exception of auxiliary, had to carry active protection complexes. As for the repair and evacuation and other devices based on the NGP, they were simply not engaged at that time, so that in the long run they could receive sufficient protection.
- modern electronics, providing control of a large-caliber gun of a tank and a small-caliber gun BMP. Of course, a different set of equipment for each machine.

In general, at that time, the NGP looked like a very interesting and promising project. The matter even reached the EGS armored demonstration machine, in which compactness, good driving performance and a crew module were combined. Among other things, EGS clearly showed how useful a small frontal silhouette is for a modern tank and how well the crew’s position inside the hull affects its reduction.
But ... In the 1996, the NUMP “spun off” the PUMA program (Panzer Unter Minimalem Aufwand - an armored car with a minimum cost). The requirements for it were determined relatively quickly, and already at the end of February 98, the Bundeswehr issued a document regulating the development of German armored vehicles.

Unfortunately, the NGP in it was assigned a smaller role than we would like. In particular, this affected the financing of New Armored Platform. And by 2001, it became clear that PUMA has great prospects and will cost much less than creating a BMP from the family. Therefore, the NGP was closed, and a number of developments, including modular booking, passed "by inheritance" to the new project. Thus, having given a lot to the new machine, “Tank that has not yet been built” became “Tank that will not be built”. However, the unified armored family refused only in Germany. Other countries - Sweden, USA, Russia and even Poland - are actively engaged in this area. Whether the fate of the NGP will comprehend their technique is still unknown.