Ukrainian "carp", or Is there a precise definition of the death of the state?

March 31 2016
72
Virtually the entire "post-Independence" period of the press, including us, writes about the degradation of the Ukrainian state. Years, precisely years, we are looking at the systematic destruction of Ukraine in all spheres. We see the curtailment of democracy under the brand name of the struggle for this very democracy. We are looking for a civil war, under the brand name of the fight against the same war. We are looking at the destruction of economic ties, and indeed of Ukraine’s economy in general, under the label of the struggle for the revival of this very economy. We look at the impoverishment of the people under the slogans of improving the lives of ordinary people. 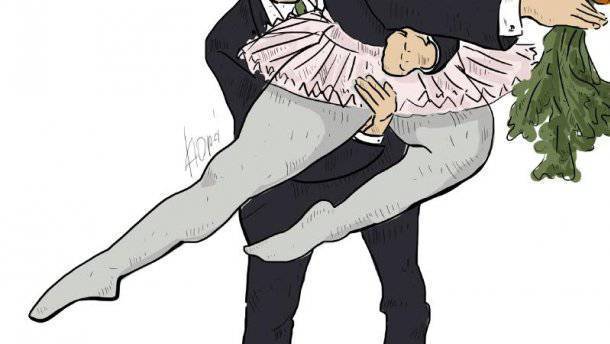 And at the same time, we see the growing desire of Ukrainians to find the enemy without. The textbook is already the enemy in the face of Russia tired. Russia does not comply with the instructions of Ukraine. It does not fall apart, it does not “eat up” the last penny, it does not whimper on the outskirts of European and world forums about some kind of help. Lives and lives. Moreover, for some reason, European and American diplomats often went to "dying" Russia. Just "to talk".

Probably, it will be difficult to find such a media, no matter where it is written or said about the "bottom", to which Ukraine has descended. Everything ... "The next" bottom "has been reached. And suddenly, after a while, it turns out that this is the" wrong bottom. "There is more.

Oddly enough, but I received an answer to the question about the number of these "sinking" from an old fisherman. A man in love with fishing, who knows about fish, probably everything.

"Yes, all right, you write ... Fish really sinks at certain periods to the bottom. And everything seems to be. In our opinion, humanly ... But, for example, a crucian carp. He spat on the bottom for other fish. He for the winter it is buried in the silt ... So the bottom is completely different for a crucian than for a bite or there are rubs ... "

Very simply explained. The whole world sees the bottom for Ukraine. And Ukrainians are already "digging the il." We think they are at the bottom, and they are at work.

The circus that we see today in Ukrainian politics, roughly from the same series. The world's media at least once express their opinions on the political crisis in Kiev. Leading politicians will vote. All those who follow the Kiev gestures.

Political crisis! Yatsenyuk has a rating that he does not have at all! The new coalition in Rada is crumbling (gathering)! The President supported that in the morning, and in the evening of this ... The whole world is following with interest ...

Why do I call it a circus? The answer is on the surface. What are circus artists working for? In order for us to rest. We admired their capabilities, but rested first. Many probably caught themselves thinking how simple everything is done by artists. It is necessary - handstand. It is necessary - flying under the circus dome. Some even tried to repeat. It turned out that it was just from the side. Just because people have been working on it for years.

And what about Kiev? And in Kiev, except Yatsenyuk, there are a couple of candidates for premieres. Yaresko and Groisman. What is the difference between these characters Ukrainians do not really need to know. Yes, and the Rada deputies, too. There is. You just have to press the button ... and you will get the result. That’s all.

Today, the country is really "buried in silt." Stop this process is no longer possible. And everyone understands this. The change of "ass" on the premier's chair will not solve anything. Already almost 70% of Ukrainians live on the brink of elementary survival. Talk about a European future is already perceived as a mockery. And the word "bezviz" became abusive.

Both candidates for prime ministers of Ukraine did not even deign to tell the people about their vision of overcoming the crisis. What for? People believe the word! He said (a) will bring, then I will bring!

So what is the difference between candidates? And the difference is in one point. Groisman - partial external control. Yaresko - complete external control. Maybe because Groisman partially “mumbled” something about his program in the Rada. And Yaresko didn't even open her mouth. Why argue? Colonies are controlled from the metropolis. And absolutely no need to ask the Aborigines for their opinion.

The tragedy of the Ukrainian people is that today the power in the country does not belong to the government or the people. Power really belongs to the nationalists and the Nazis. There is no one to lean on the state. Army? To speak of the Ukrainian army as a pillar of the state is not even funny. The army today is more like a mine under the state. And no one knows when she can jerk.

Siloviki? What security forces we can talk about today, if weekly then at the Ministry of Internal Affairs, then not even dozens, hundreds of “traitors and spies” find in the SBU. When thousands of professionals are replaced by politically loyal amateurs.

There are still saviors. We periodically, when the situation comes to a standstill, we recall them. Oligarchs! They seem to be able to buy everything and sell everything. They need Ukraine. And if you look carefully? Do I need? Where have you seen big business (namely oligarchic), which would be concentrated in one country. Oligarchs out of the country. The oligarchs "make money" and as soon as this money becomes small, they leave. Homeland is where I feel good, understand where it’s good to make money, their principle.

The collapse of the country began. Circus program goes to the natural finale. Already made "strong men" in the Donbas. Speakers "magicians" in the economy. Performed "dog trainers" with the preparation of youth. Speech "clowns" in lawmaking.

The spectators, at least those of them who have such an opportunity, have already pulled from the circus building to the exit. Those who still have the ability to think, understand that the program is over. Money Spent. And now you need to go outside. In the dank spring thaw. Now a bright arena and a fat wallet will remain only in the memories.

And the new prime minister of Ukraine is only the last, not very interesting, number.

“Everything that is happening in this country now speaks of how far Ukraine’s political elite is from the civilized world. Unfortunately, all our support is leveled by the greed and short-sightedness of the Ukrainian leadership, who are looking for preferences for themselves, but not for their long-suffering people. We need to do something with this, since this state of affairs cannot last for a long time. While Ukraine is being led by politicians who are extremely unpopular with the people, while we see the destruction and blockade of the inhabitants of our own territory not only in eastern Ukraine, but also in other regions of the state, while instead of vital reforms we observe outright chatter and populist statements by the Ukrainian establishment, Ukraine cannot be considered a civilized country. "

This statement is the one who fed "maydaunov" cookies. Yes, it was Victoria Nuland who dotted the i. In her interview with a Canadian journalist. Do not go for future American handouts Ukrainian "stomach". They sold the country not for a pound of tobacco.

Ctrl Enter
Noticed oshЫbku Highlight text and press. Ctrl + Enter
We are
Results of the week. “Tut's neighboring state was threatened with war. Lend, please, half a dozen millenchik on militaritskih goals "Turkey: fighters for democracy came together
Military Reviewin Yandex News
Military Reviewin Google News
72 comments
Information
Dear reader, to leave comments on the publication, you must sign in.